That’s really awesome!
Great job on sculpting the face and such an original conversion.
Hashut approves of Big Hats

Here are some pictures of my entry for the naval-themed Golden Hat, along with a little backstory.

When I was thinking about the concept of sea-going warriors wearing big hats, an image that readily presented itself to my mind was that of a Nelsonic-era Royal Marine:

As soon as I had had the idea, I knew that this was going to be my project for the GH. I generally have a predilection for combinations of medieval-style fantasy and Napoleonic aesthetics, such as in Joe Abercrombie’s First Law series, or the Albionnicans of Arcworlde.

So I opened my bits box, grabbed my sculpting putty, and set to work. At the start, I intended to do an entire landing party - a marine, an officer, a tar, perhaps a greenskin deckhand - but it quickly became clear that, if I wanted the result to look the way I wanted, I had to devote my time to this single miniature. (I may still make some more navy-themed Chaos dwarfs, put them all together onto a mini-diorama-style Troop base, and perhaps play them as Decimators or even Berserkers.)

Being my lazy self, I neglected to take WIP pictures, but I think the bits I used are more or less easy to recognise, most prominently the arms from the GW Thunderer sprue. The uniformed torso, hat, and the Napoleonic-looking features in general have been sculpted by myself.

I’m no great hand with a brush, and sometimes painting my minis does feel like a bit of a chore to me. So my paintjobs are generally more along the lines of colour, wash, and maybe drybrush. However, for this project I consciously tried playing around with layers and highlights for the first time, both because I felt that I owed it to the chap after spending so many hours assembling him, and also because I basically had to in order to make the white parts look decent. And I was surprised to find it positively fun at times!

All in all, I had a great time working on this project, and am very happy with the result. Thanks for taking a look! 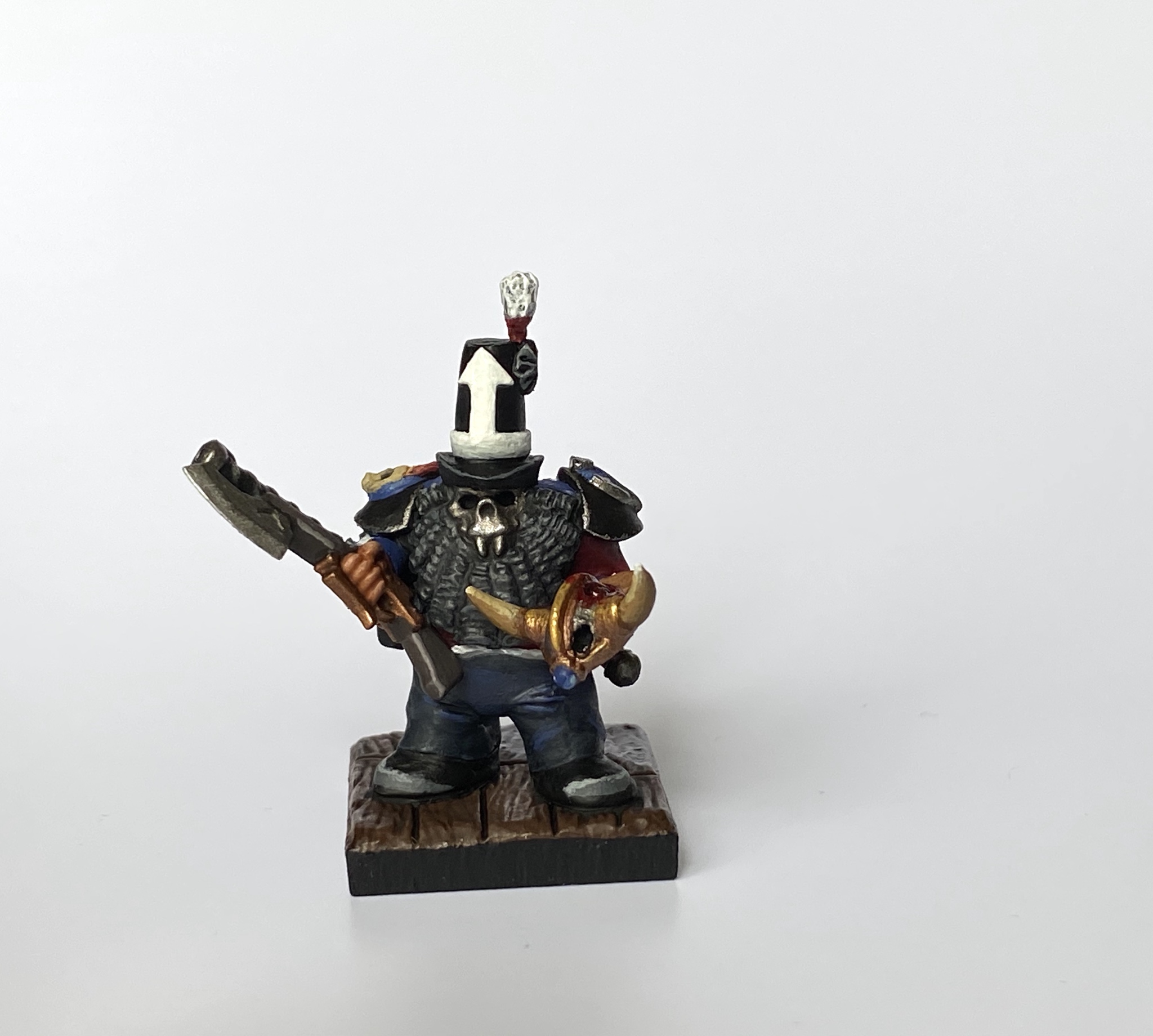 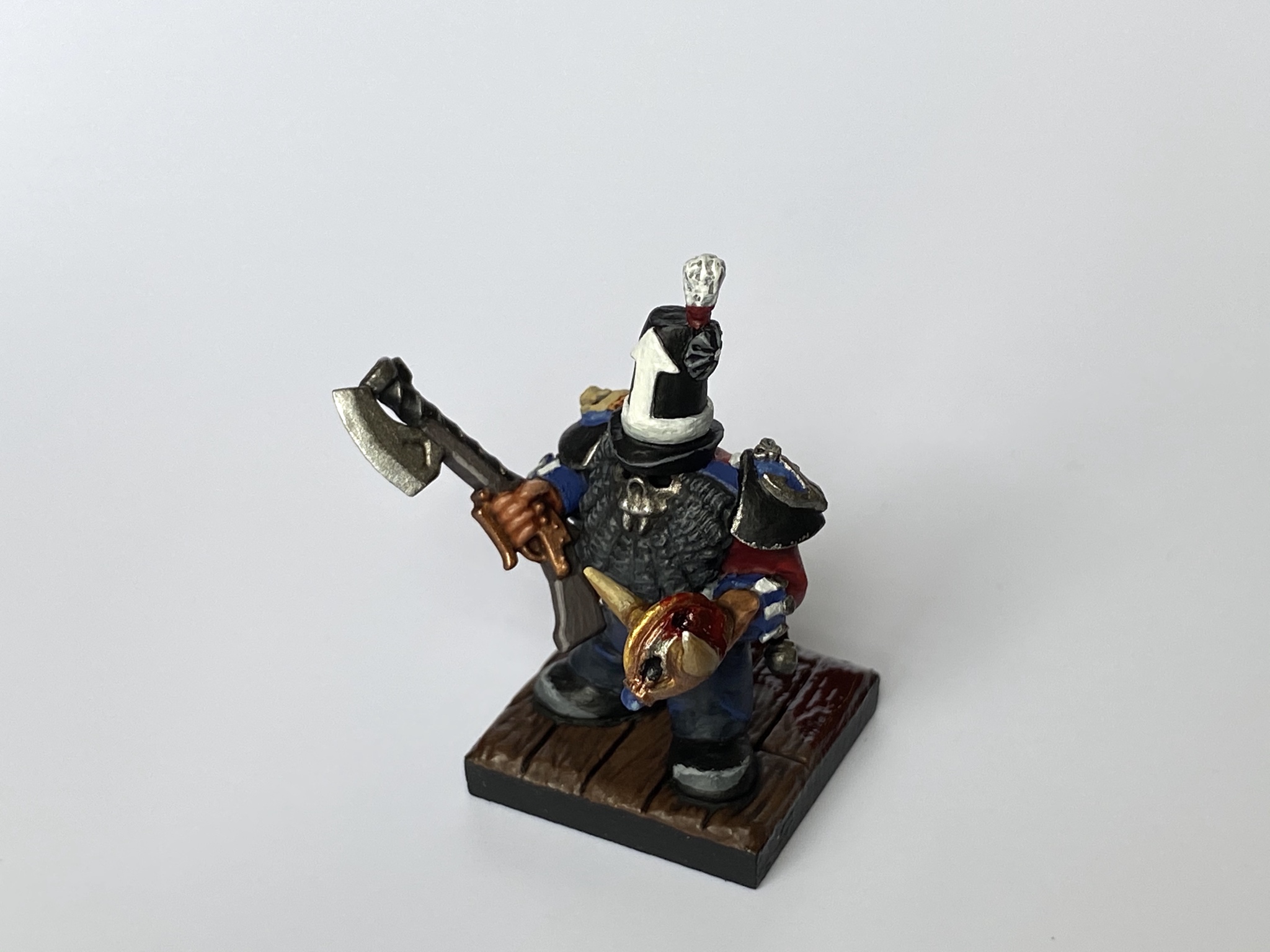 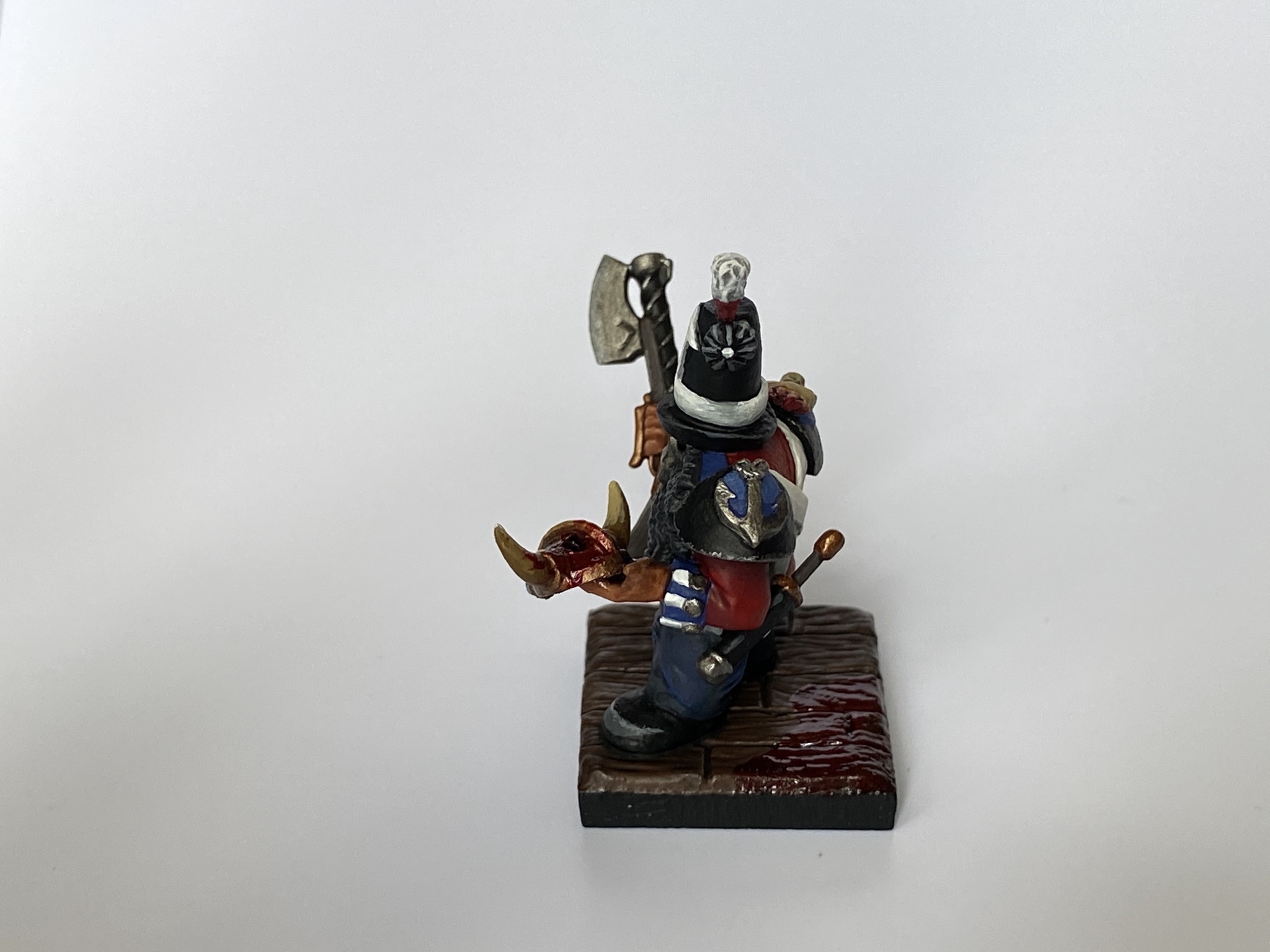 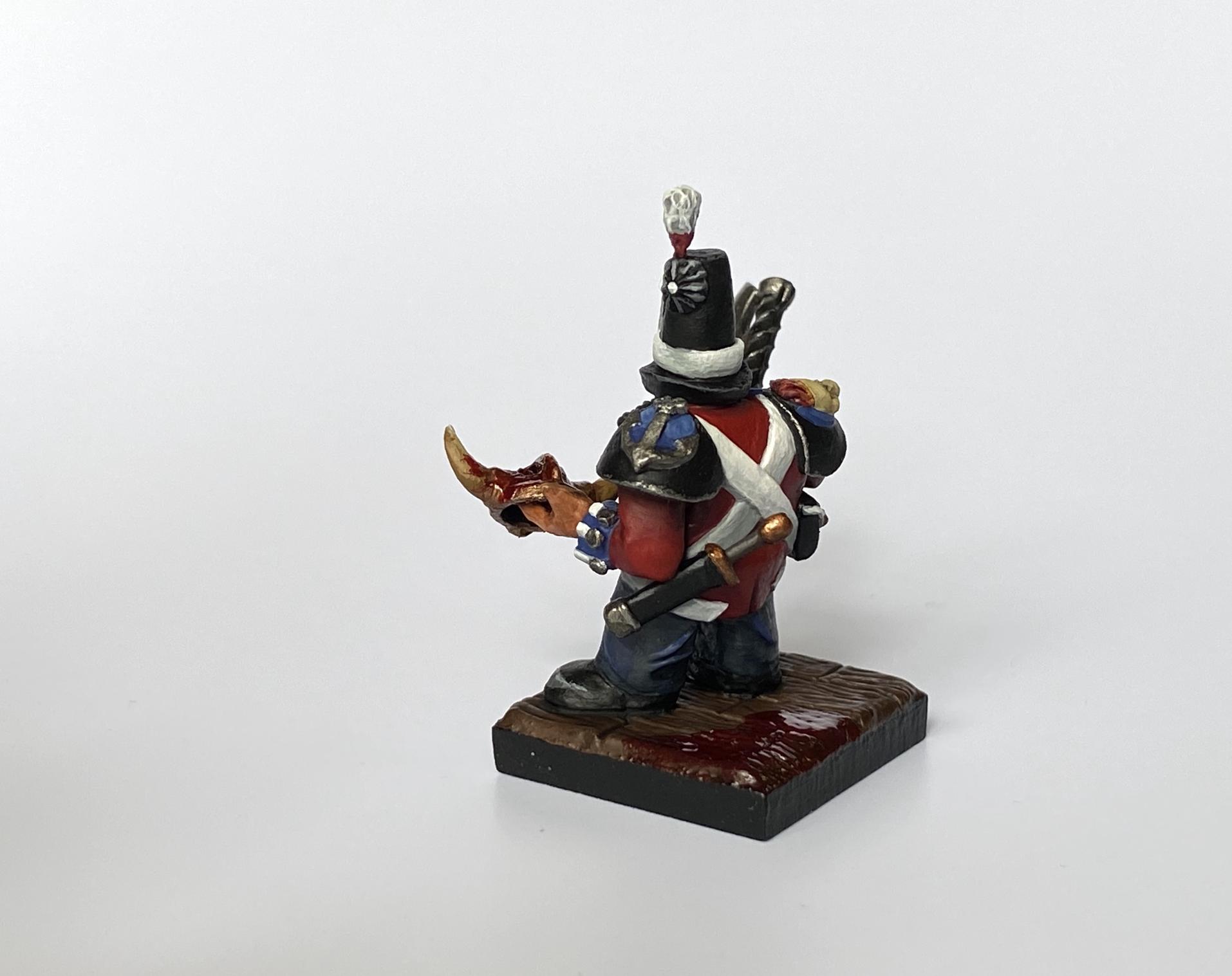 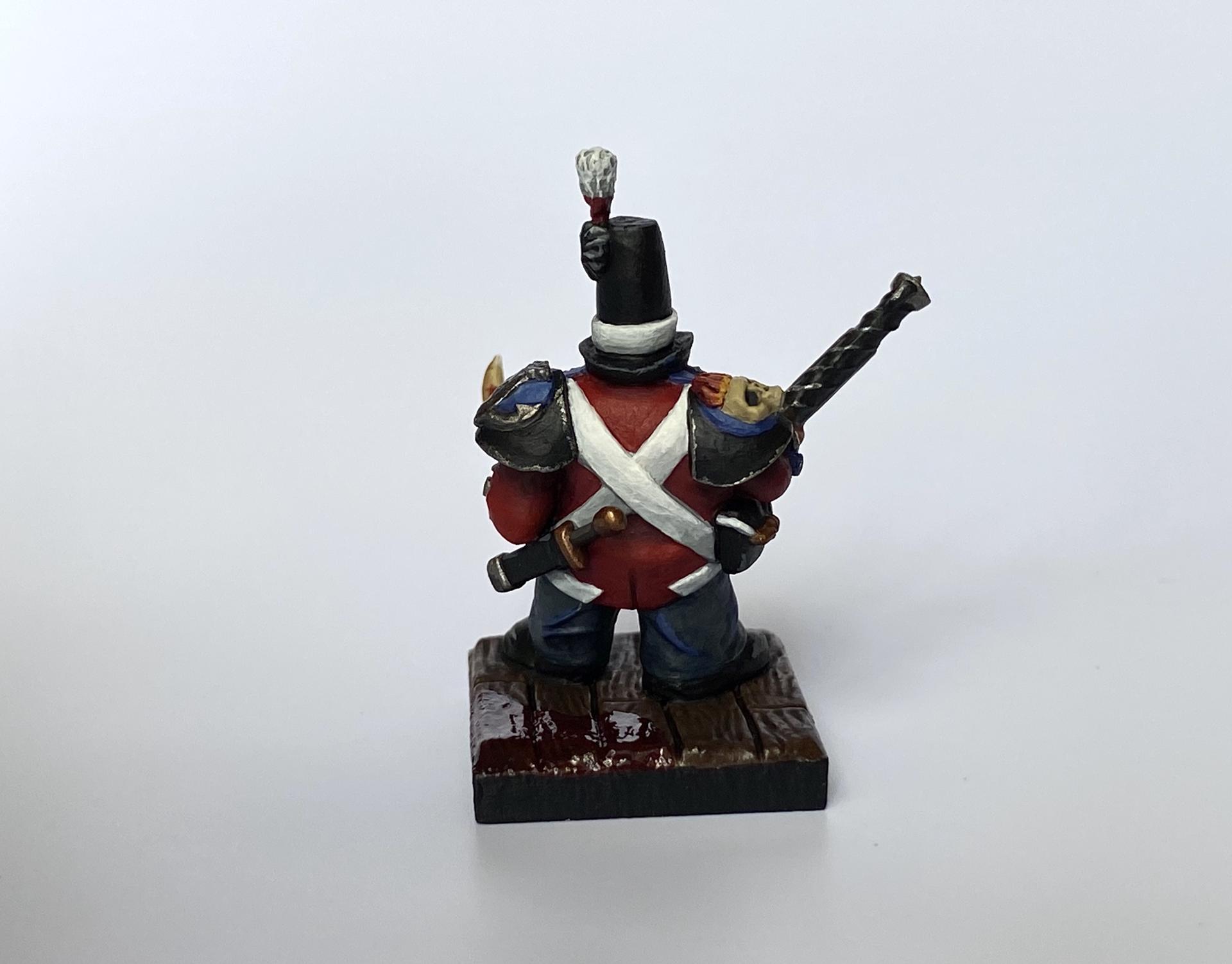 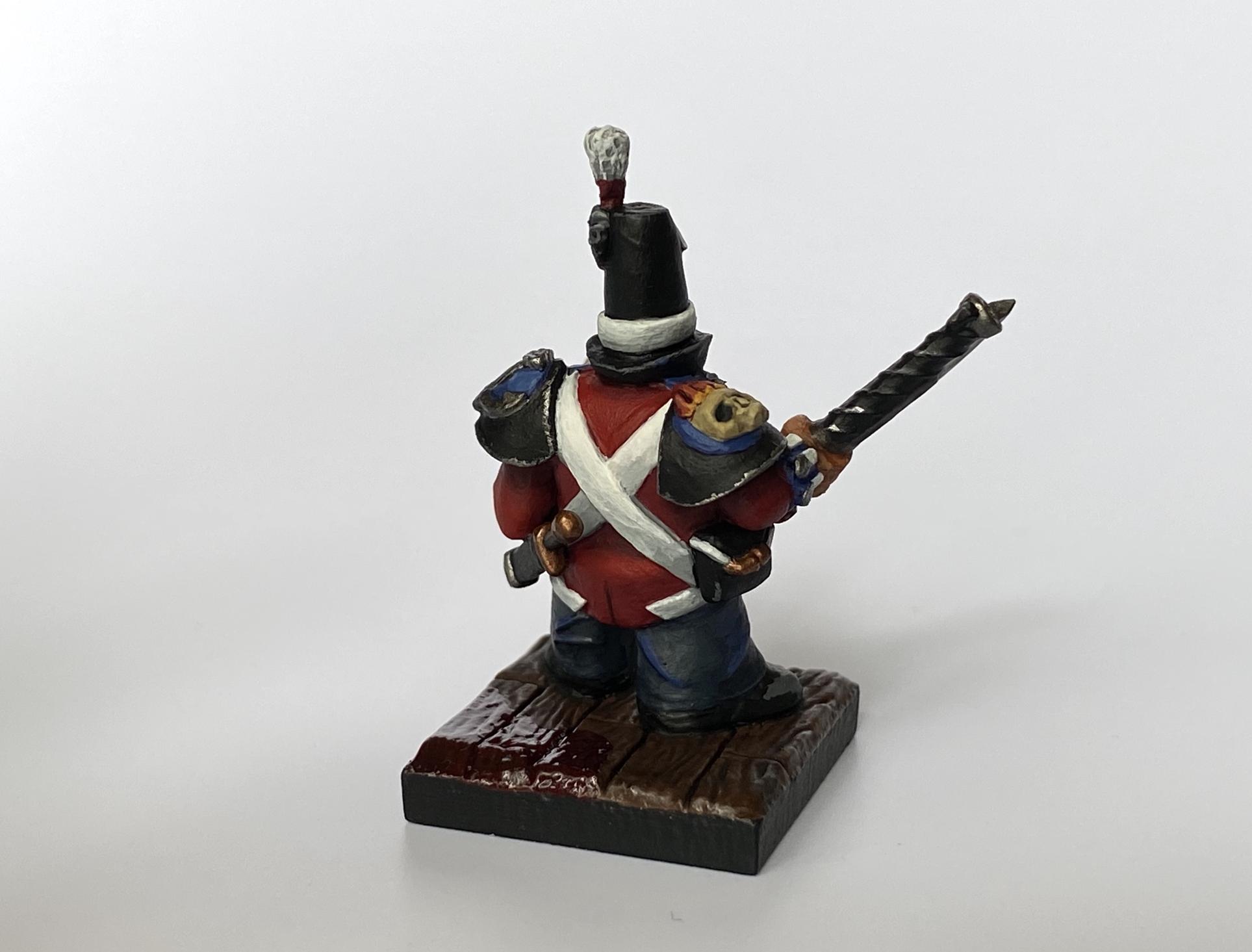 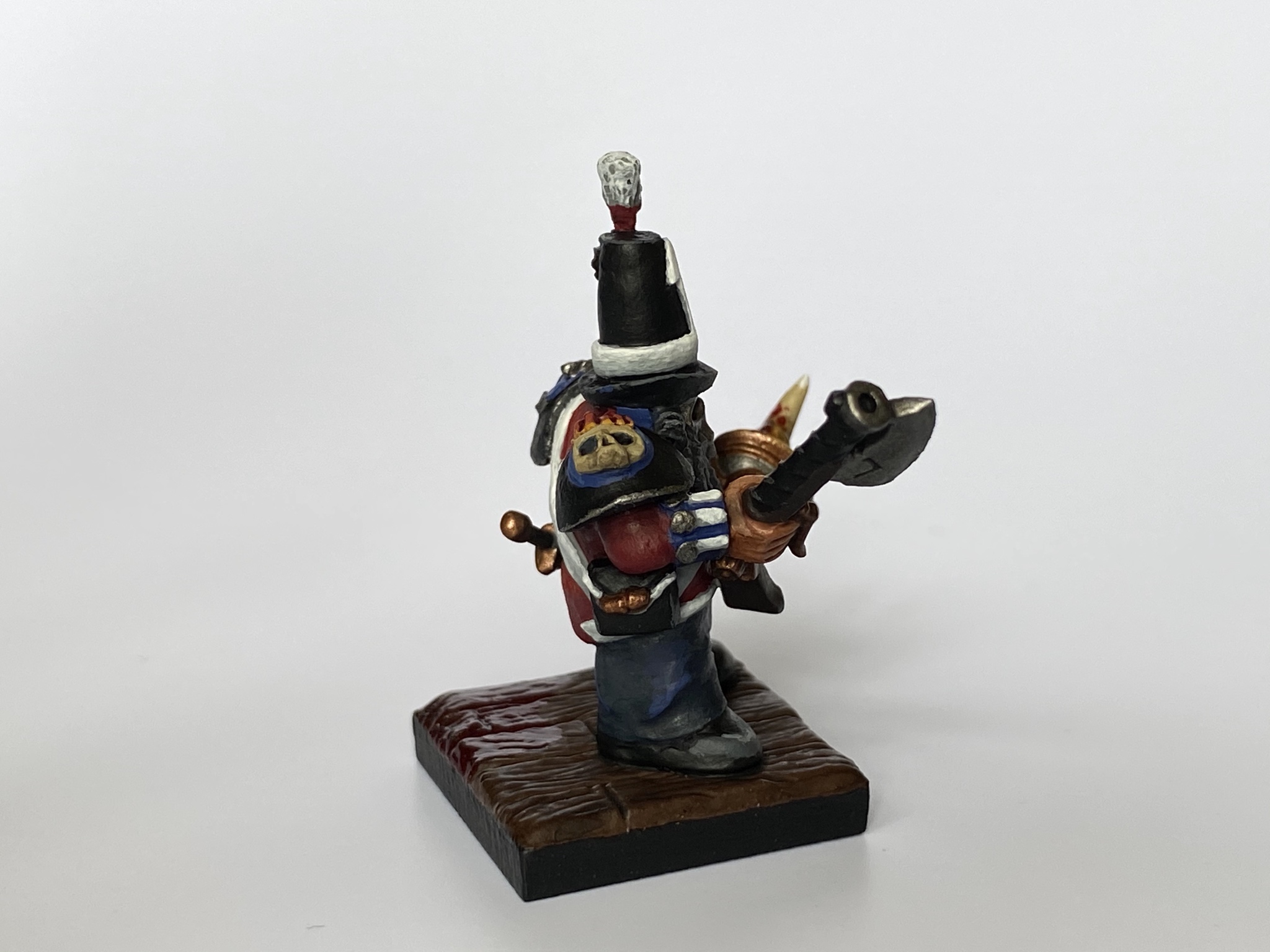 Its more often than not the compressed images in the contests makes it hard to appreciate the model.

I was pretty sure that was your inspiration. Do so love that era.

Really nice mini. So many cool touches. I love the shoulder plates. 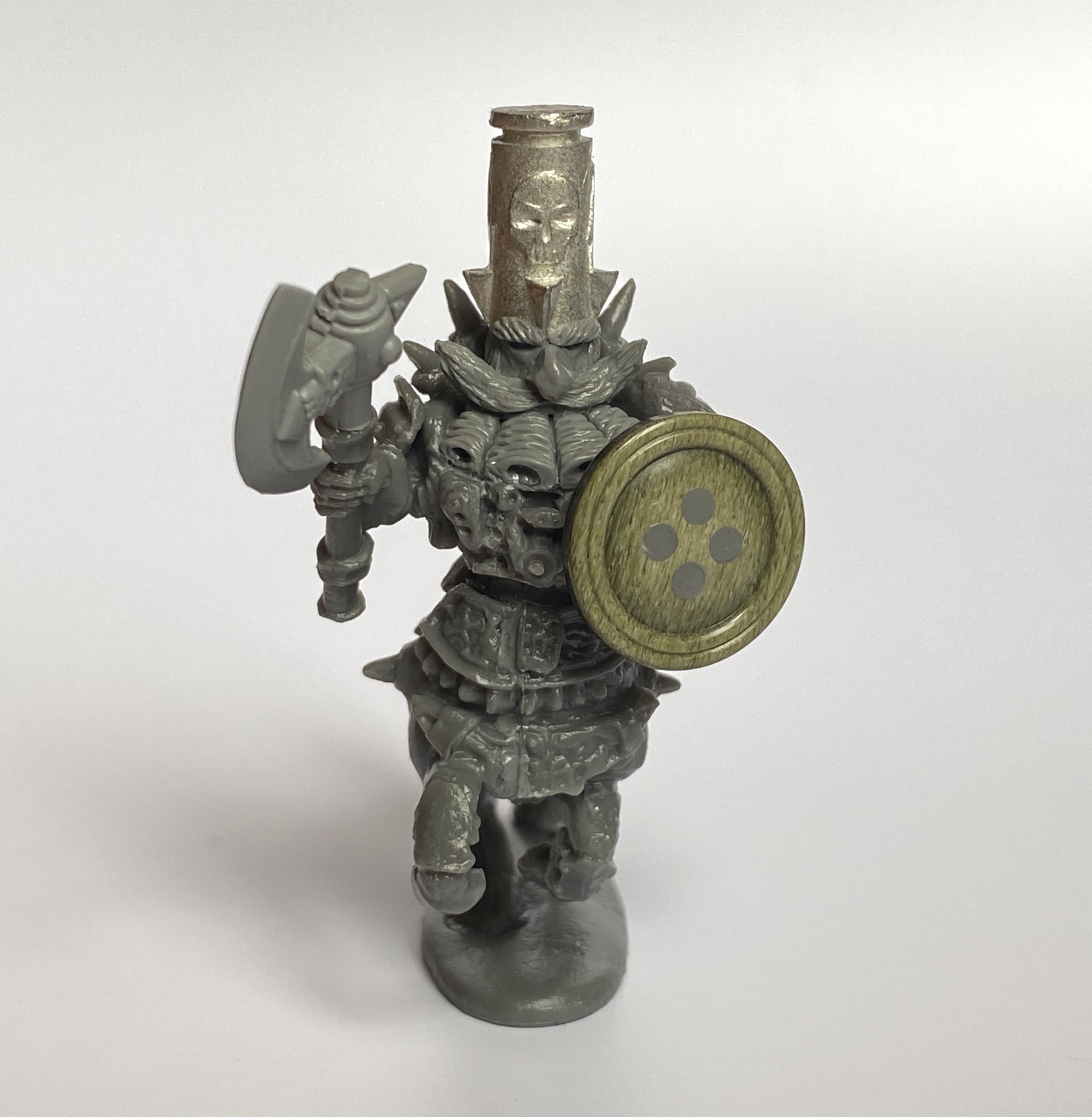 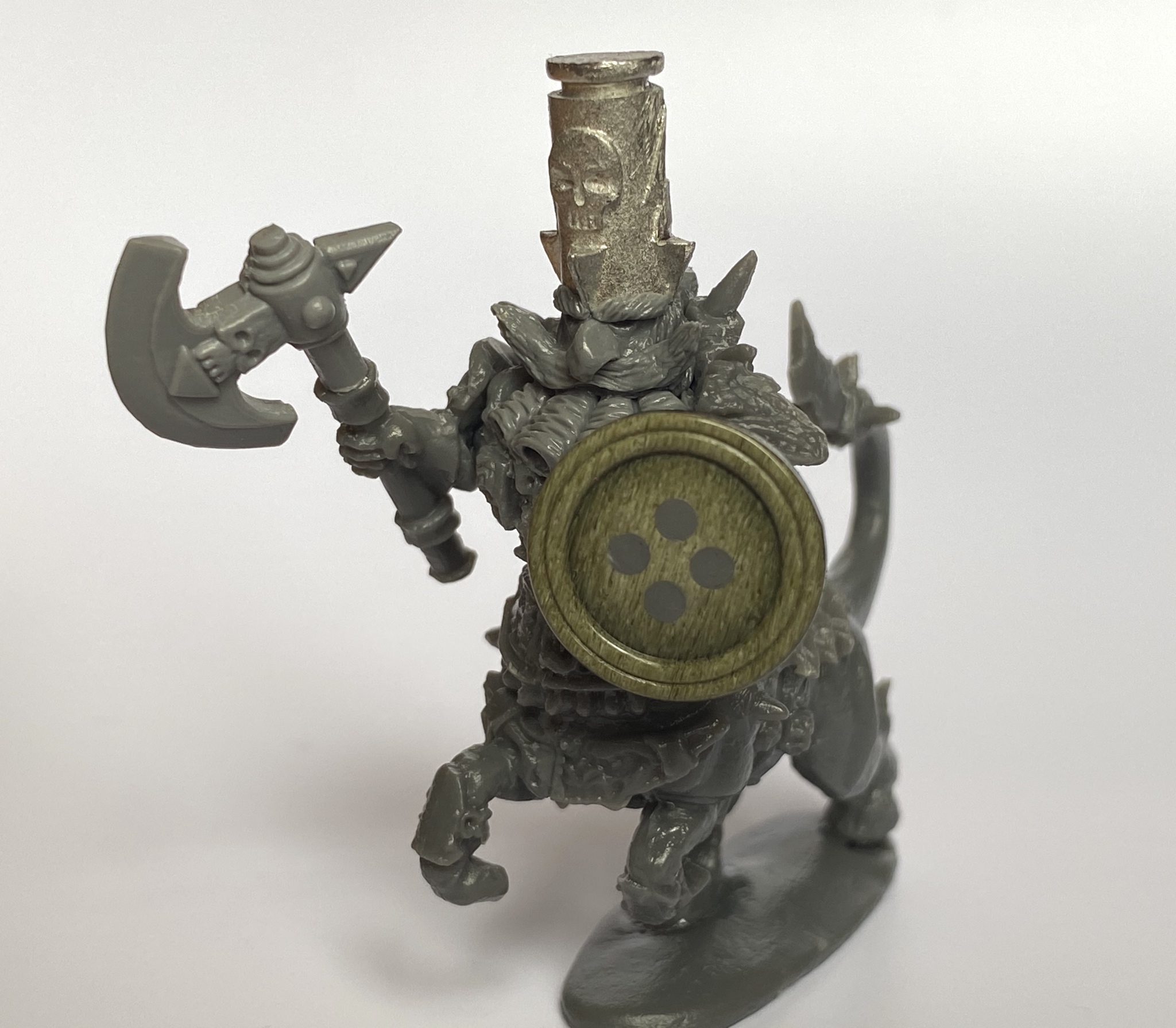 But the good thing is that this also means I‘ve got 8 more minis before I have to make up my mind about the shield ornaments.

A short status update: I‘m currently out of town for some time, and luckily, I managed to stow some of my sculpting gear tight enough to bring along. (No bits box, however, which means those Bull Centaurs will have to wait until I get back.

) So here‘s a picture of my current summer project in its earliest stage:

I‘ll post some WIP pics as soon as the whole affair looks a bit more substantial than it does right now. Any feedback and advice along the way will be much appreciated.

Have a nice summer and stay safe, everyone!

Now that my current project is starting to take recognisable shape, I’ll elaborate a bit on what I’m actually about with this. As I rarely fail to mention, I am very fond of the so-called Dendra armour (the best kind of armour

), here as depicted in the impressive Age of Bronze mod for Rome II: And some months ago, @Admiral forwarded this beautiful piece of artwork to me (by Simulyaton):

Some interesting points came up in the ensuing conversation (e.g. where in Hashut’s name do the tusks on that helmet come from?), and Admiral suggested that Dendra Armour might very well be applied to Chaos Dwarfs – which is what I’m trying to do here. In congruence with the style, I’d like to place the finished model on this Mantic Chariot, so I took the measurements from its original driver.

Here’s the progress up to now, with the last three pics showing the current state of affairs: 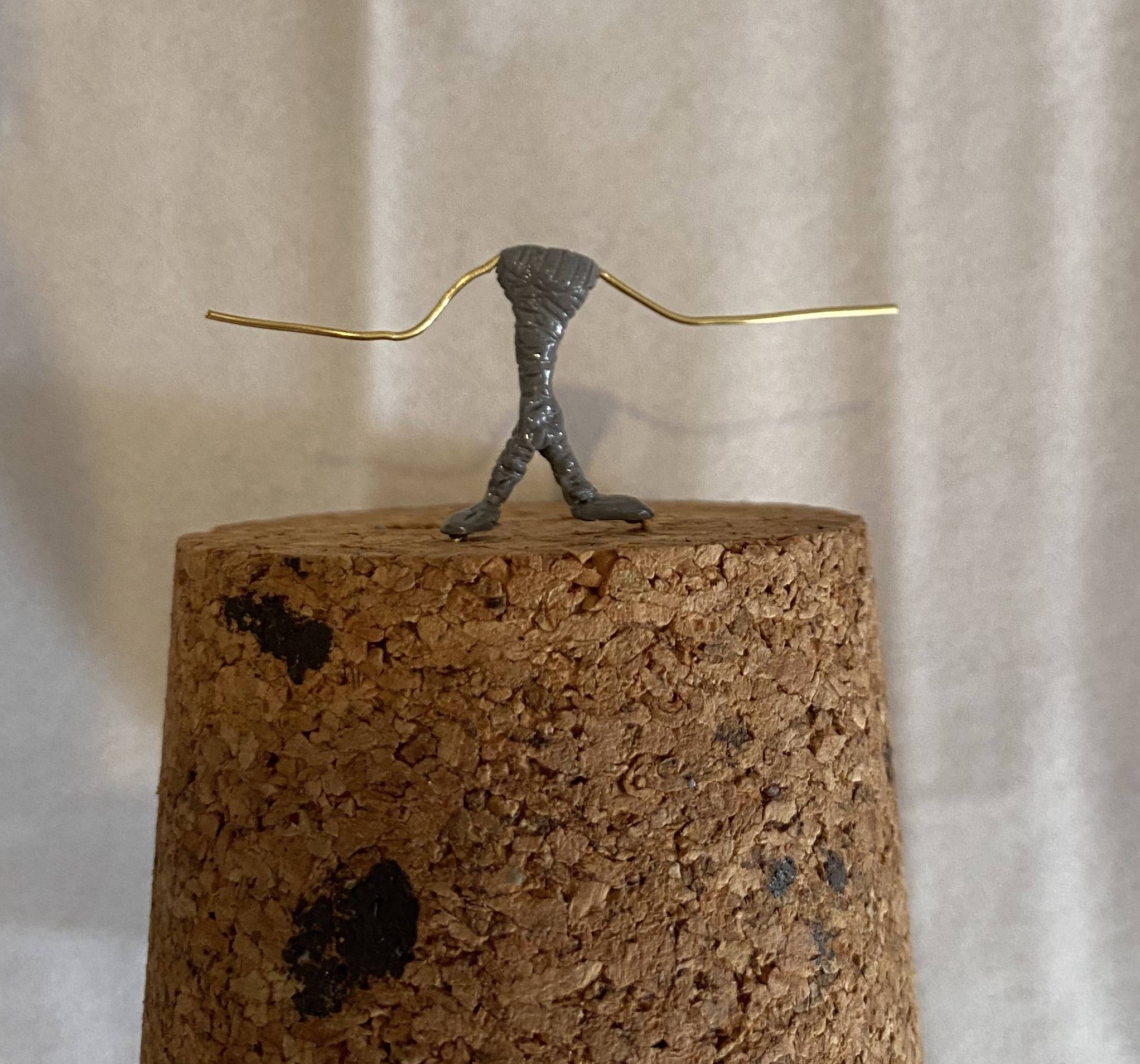 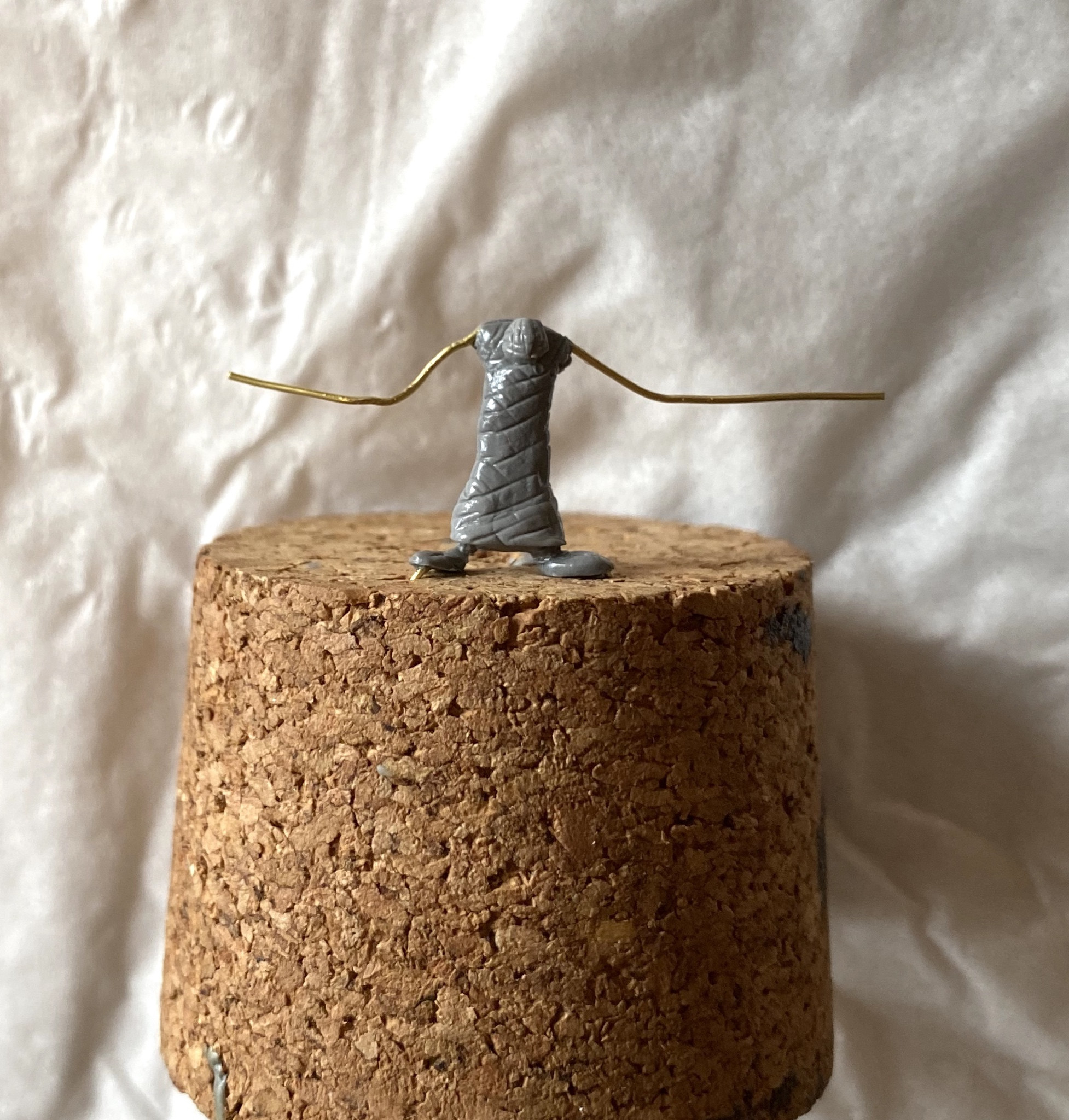 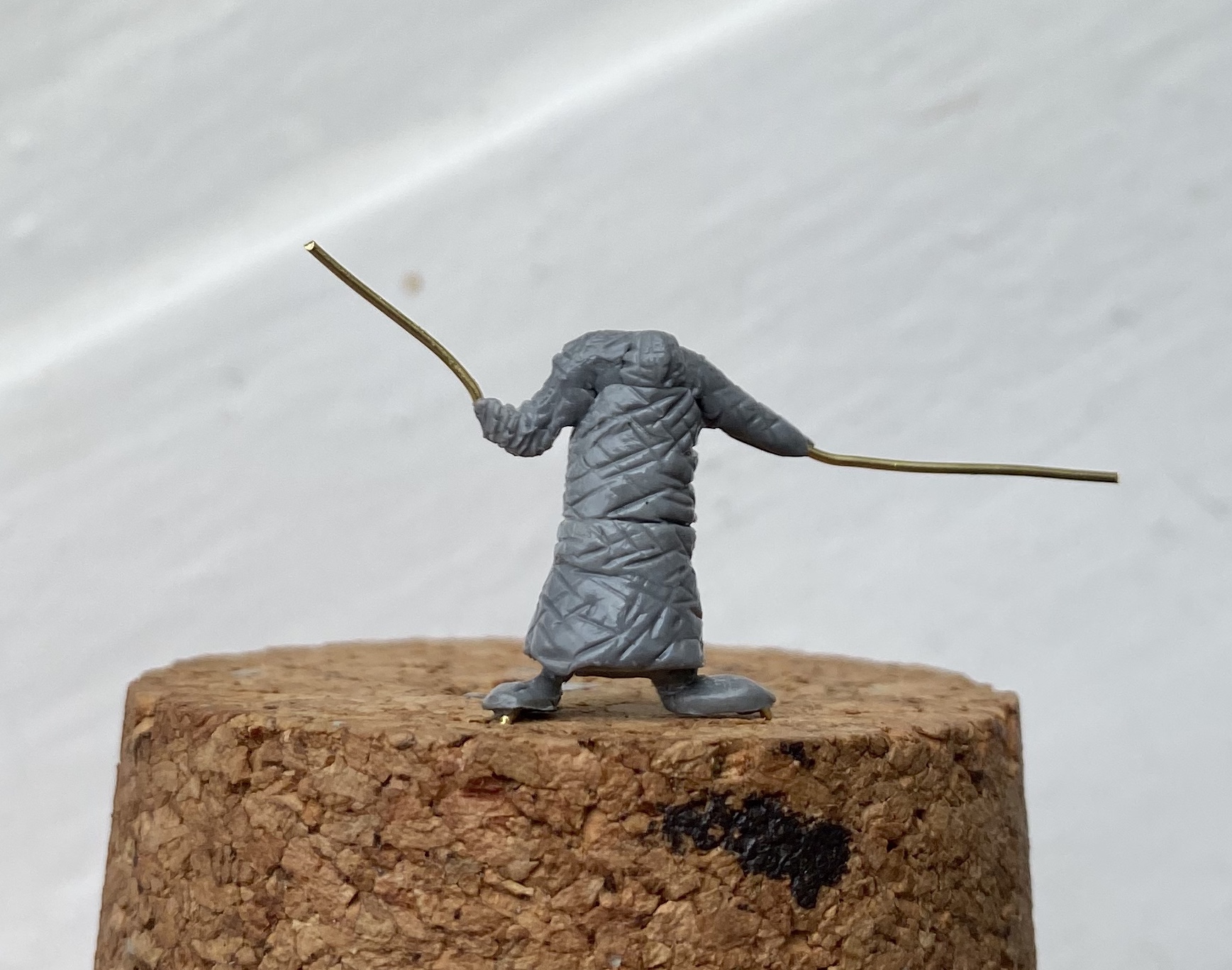 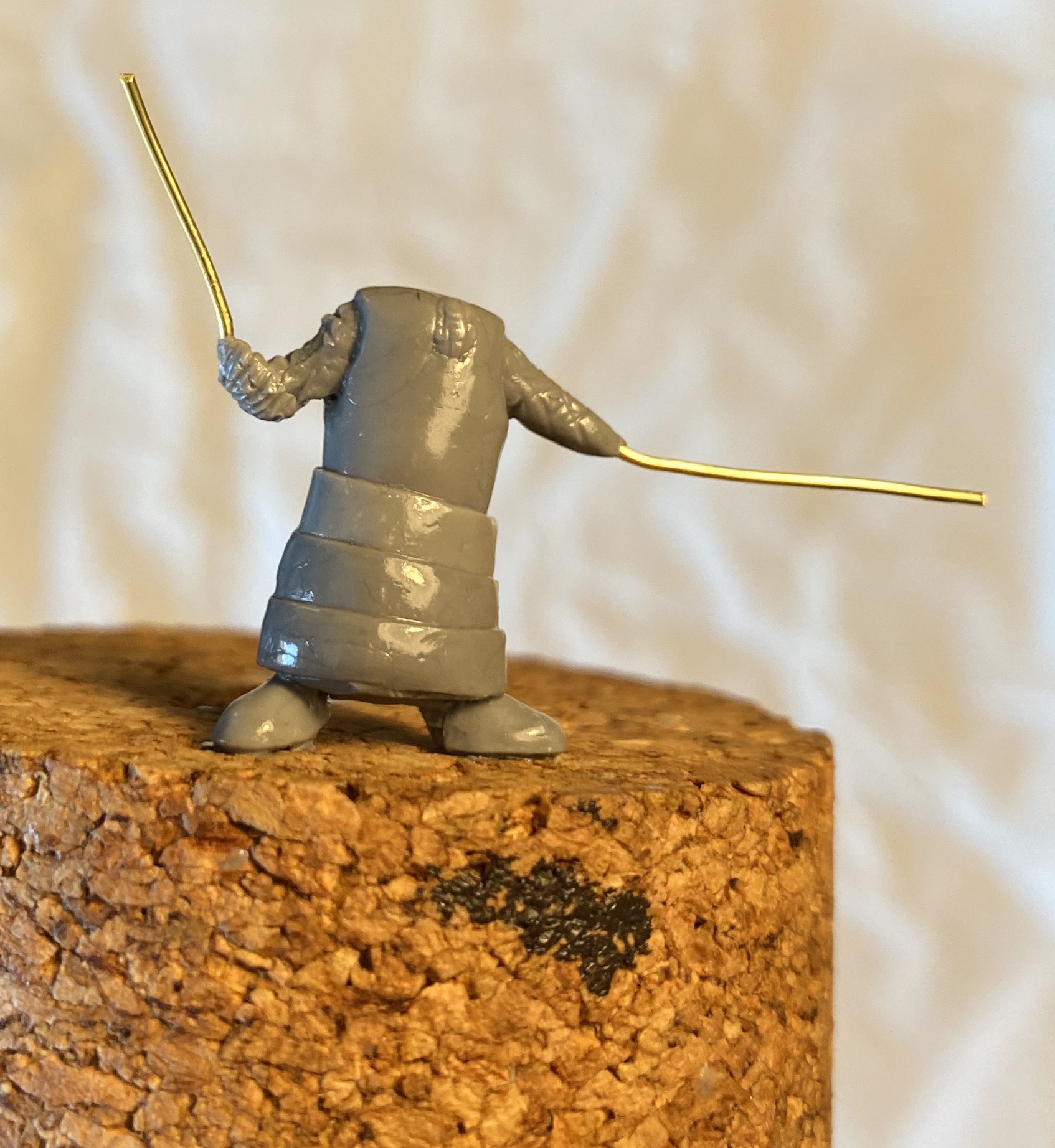 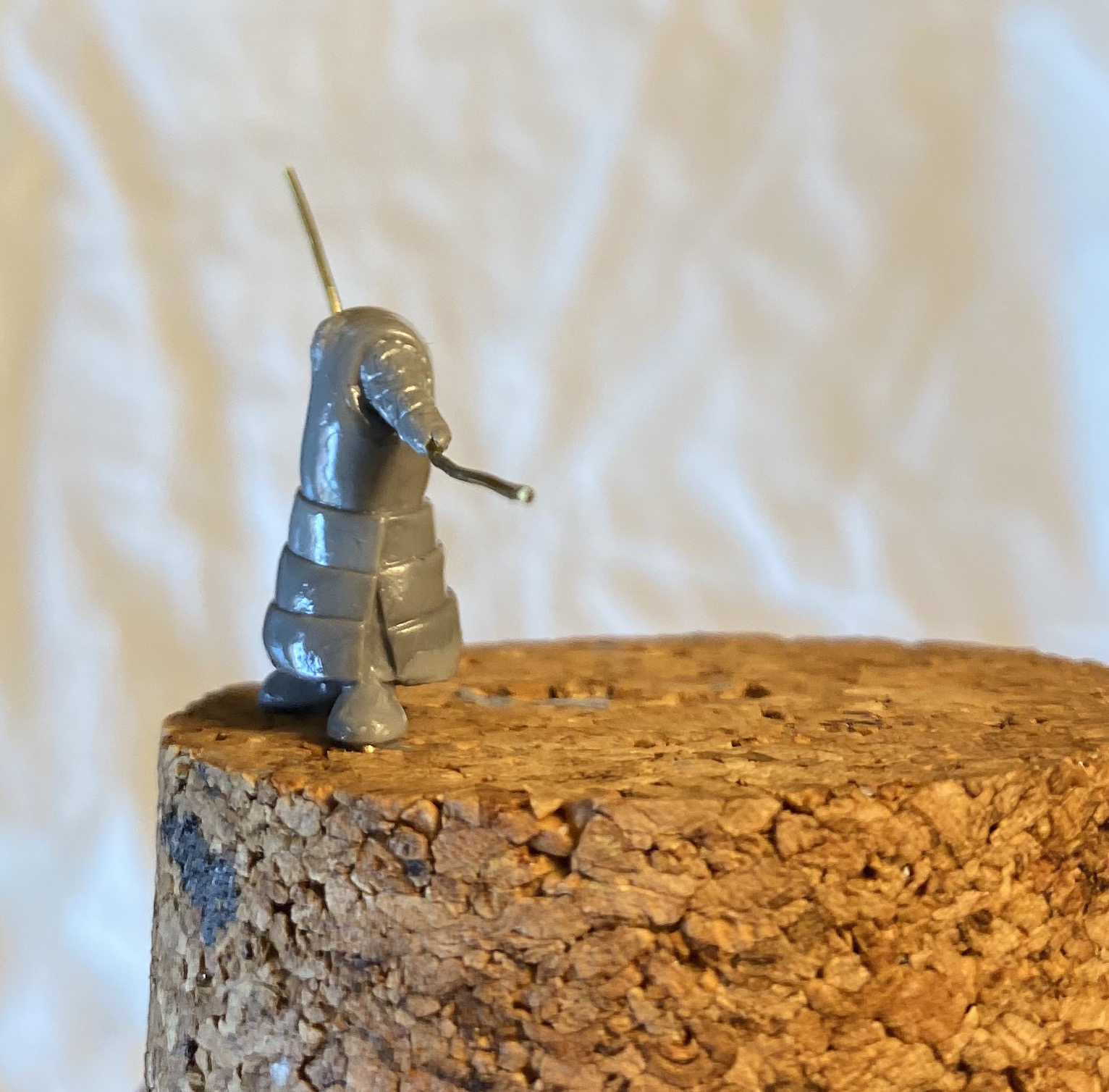 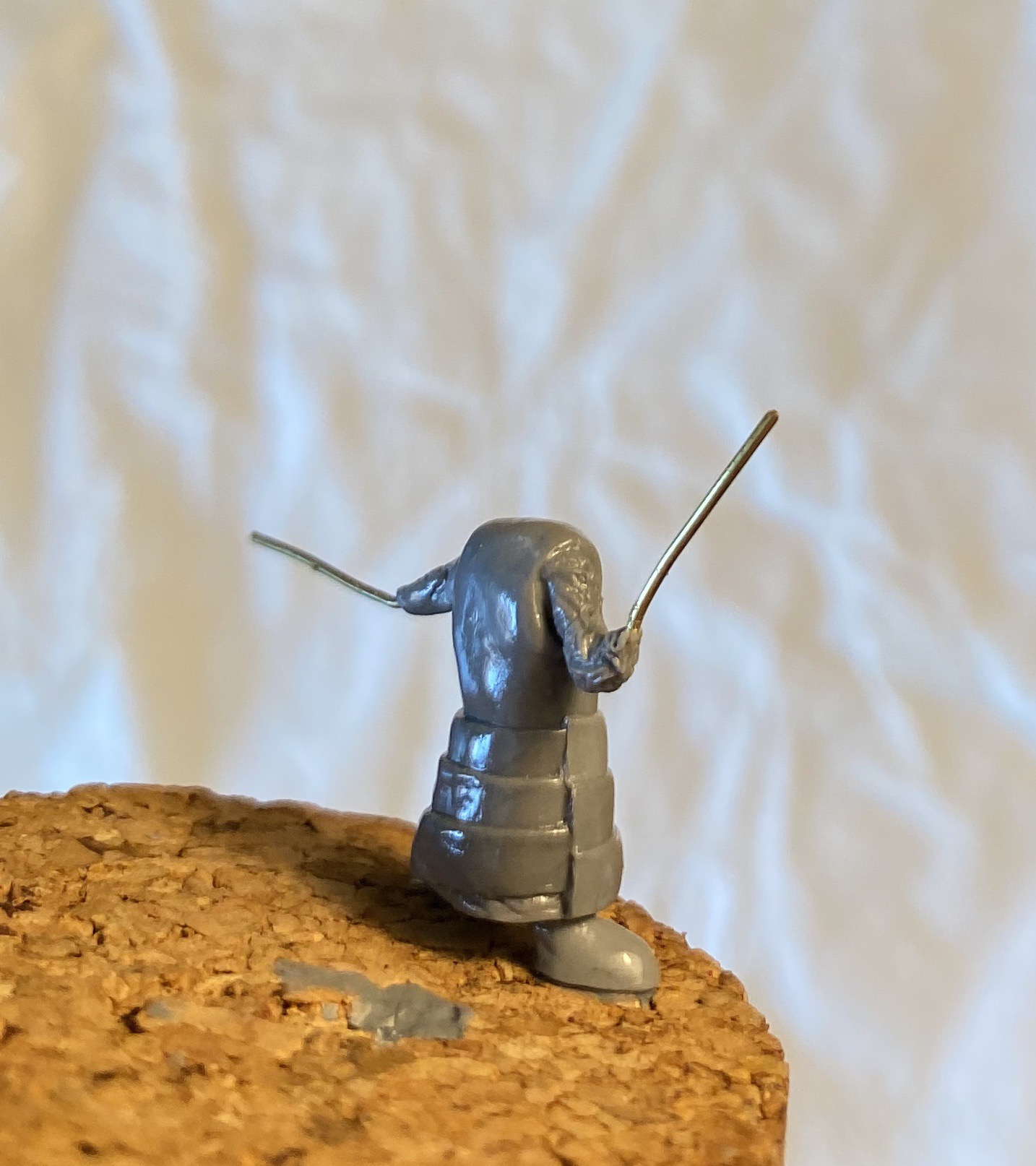 So the basic shape of the armour is already there. I tried to place the metal segments the way they would hang with this body posture, with varying success, but I think there’ll be some room for correction when I add the trim around their edges. I want the guy to wear a fringed robe beneath the armour, which will cover the spaces that have been left “naked” for now. I’ll leave the arms for later, so I can make corrections to their proportions; the left arm will end in a fist holding on to a handle, while the right will hold a polearm at rest.

As the next step, I’ll do the foundation for the head and gorget, because I’ll need that in order to place the shoulder plates correctly. The gorget is going to be a bit of a challenge because of the dwarfy hunched shoulders (which practically eliminate the neck), but I’ll do some experimenting and see what can be done. Wish me luck!

That looks very promising. How about a release? ;o)

Great start, and really nice to see you tackle Dendra armour! You could have a gorget for the hunched back of the neck (horizontal or diagonal instead of vertical). The upcoming trims should do wonders for the overlapping plates.

One easy way for adding an impression of stitching to the cloth/leather trims would be to take a needle and dot it in a line. Just like Forgeworld did for their warmachine crew gloves.

A much more demanding method is to sculpt small raised stitches (often preferable for cast miniatures). Anyway, very good start! Like @Zanko I hope to see some Dendra armour evil dwarf cast in the future.

@Zanko Well, I certainly hope to sculpt something with which I’m content enough to get it cast some day.

I’m a sufficiently ardent fan of Dendra armour to give it some more tries after this one and improve along the way - perhaps there’ll be something castworthy at the end of the road!

@Admiral That’s a good idea, I had also thought about doing the gorget diagonally. However, I’ll have to be careful to keep it very short at the backside, otherwise the Dwarf’s neck might look much too long. Concerning the stitches, I think I’ll press them into the trim like you said - I don’t feel quite up to sculpting such minute detail yet. But the day might still come! 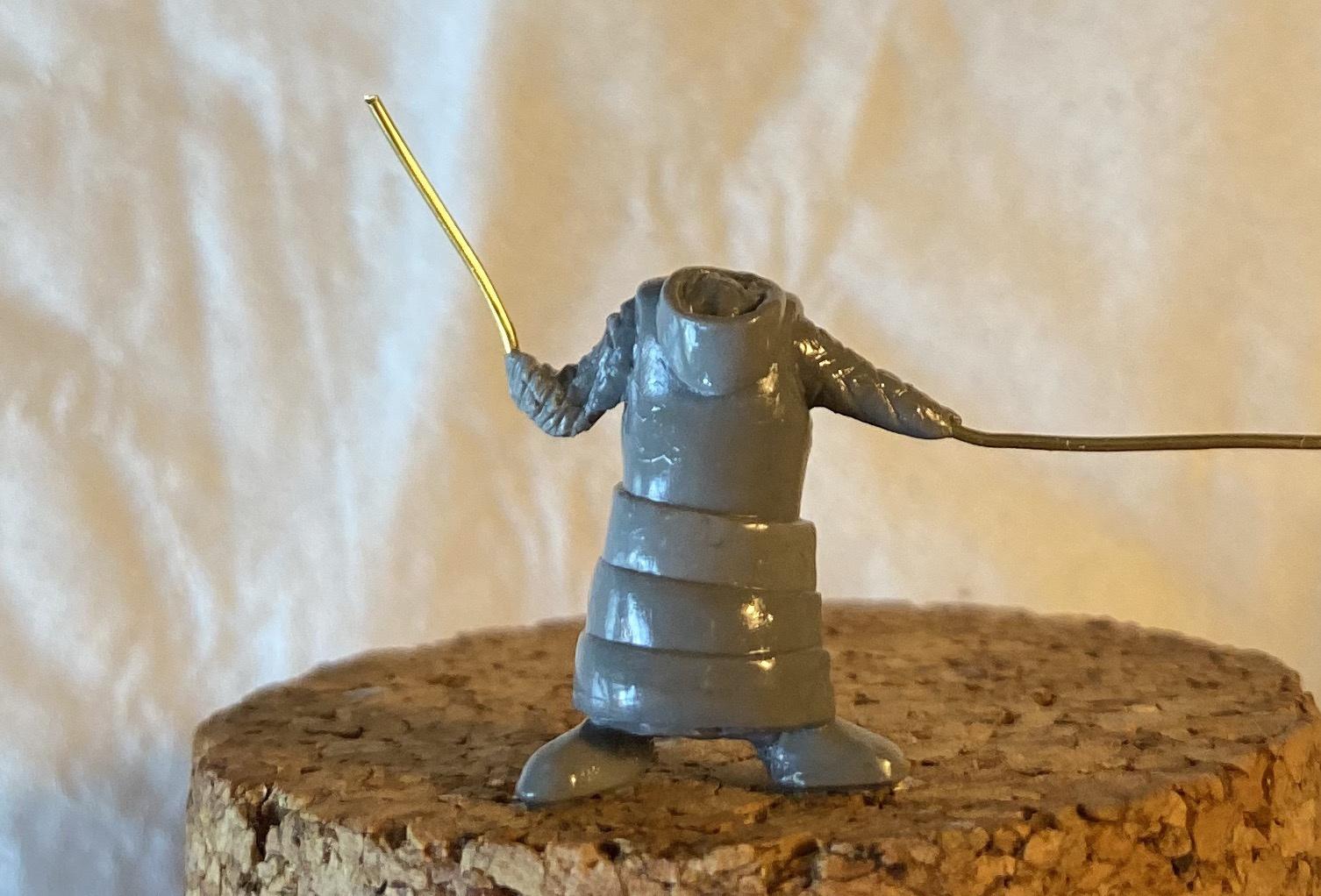 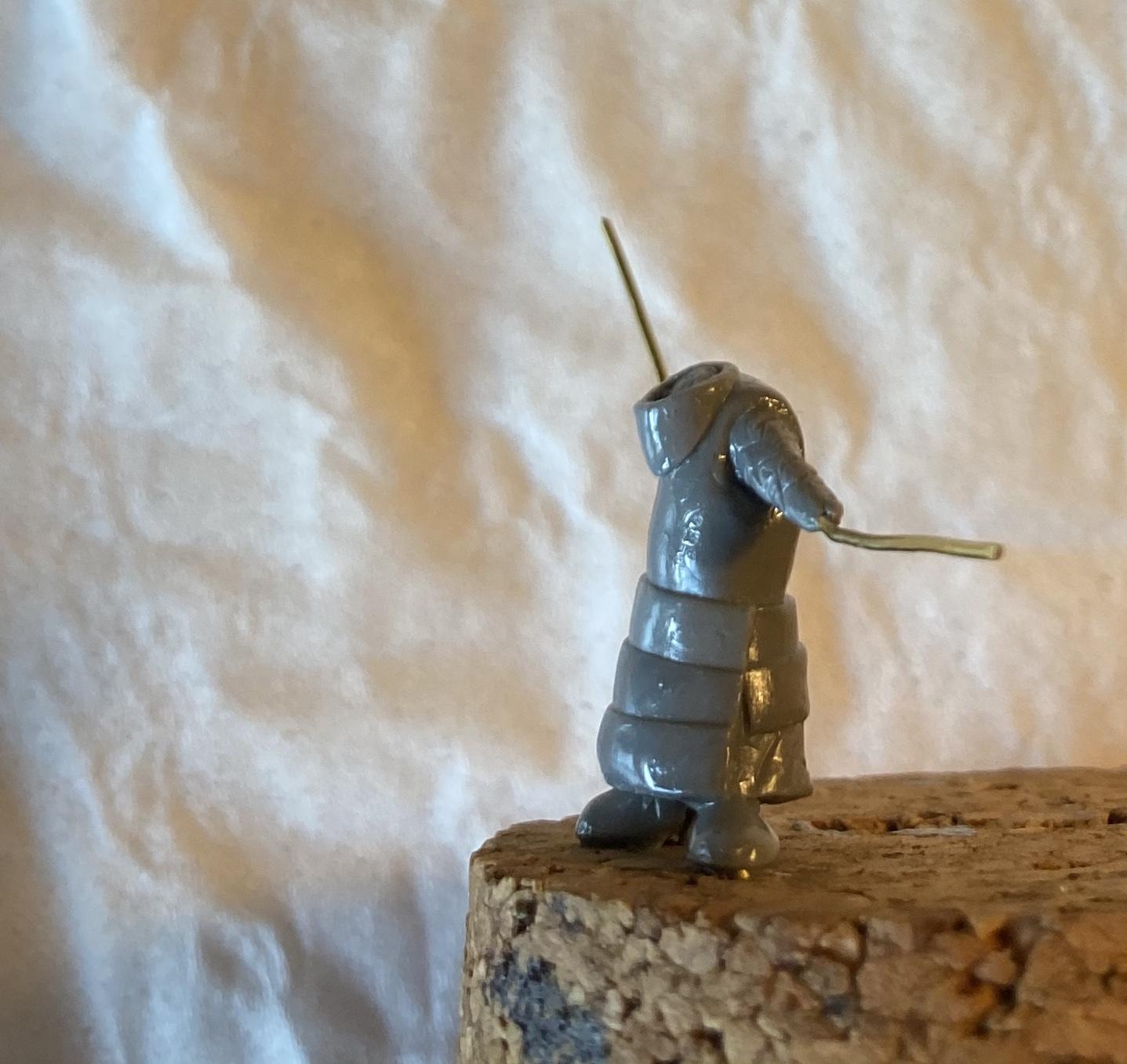 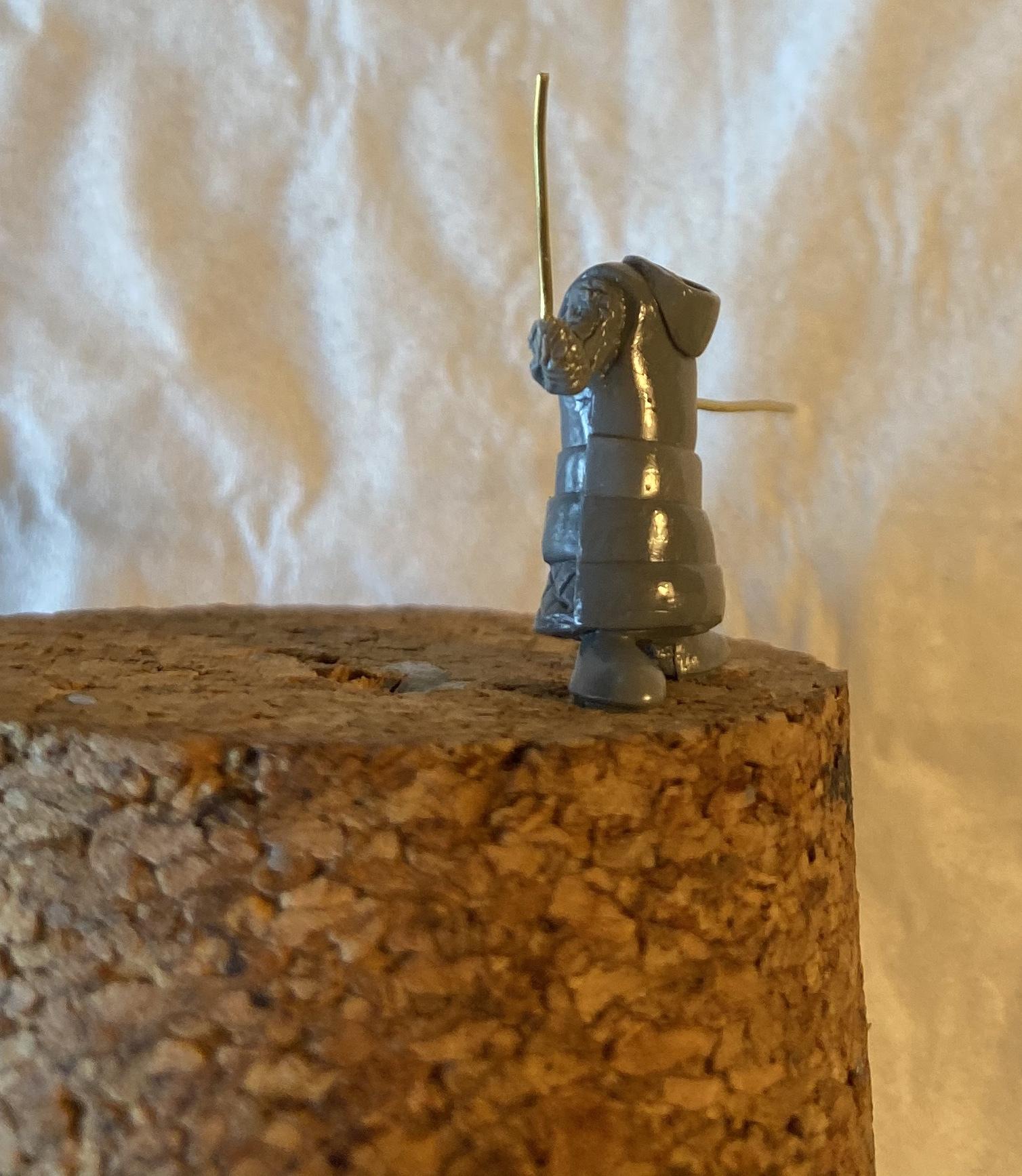 The plan is to have the back part meet with the rim of the helmet, and only let the dwarf’s eyes, nose and moustache show at the front. (On a side note, I fear that this armour will require the dwarf inside it to wear his beard trimmed uncommonly short.

) I’m not sure if the head might end up looking too upright with the gorget like this; but I think it will appear more hunched once the massive shoulder-plates are in place. All suggestions welcome! 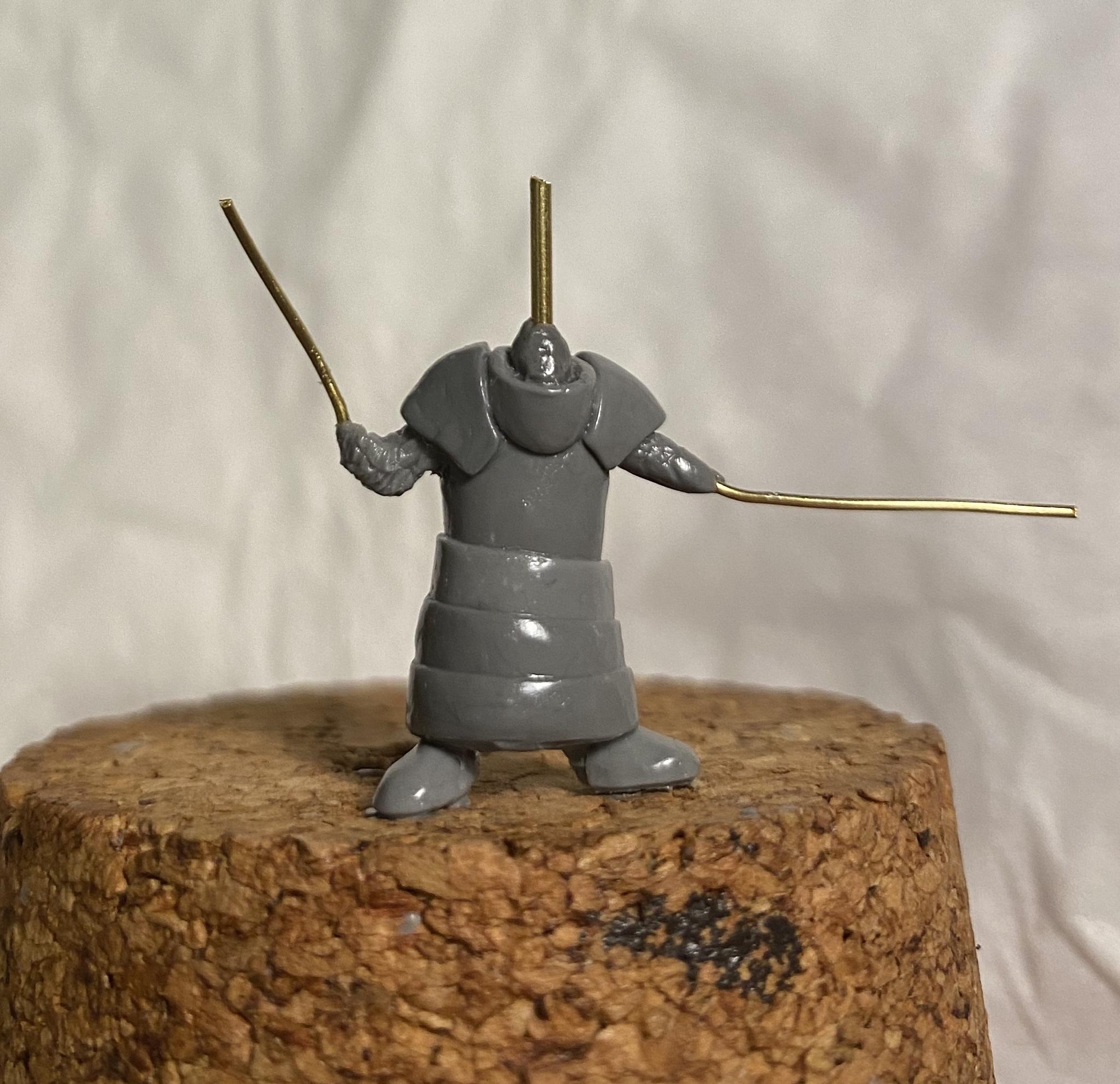 … and got going on the trims. 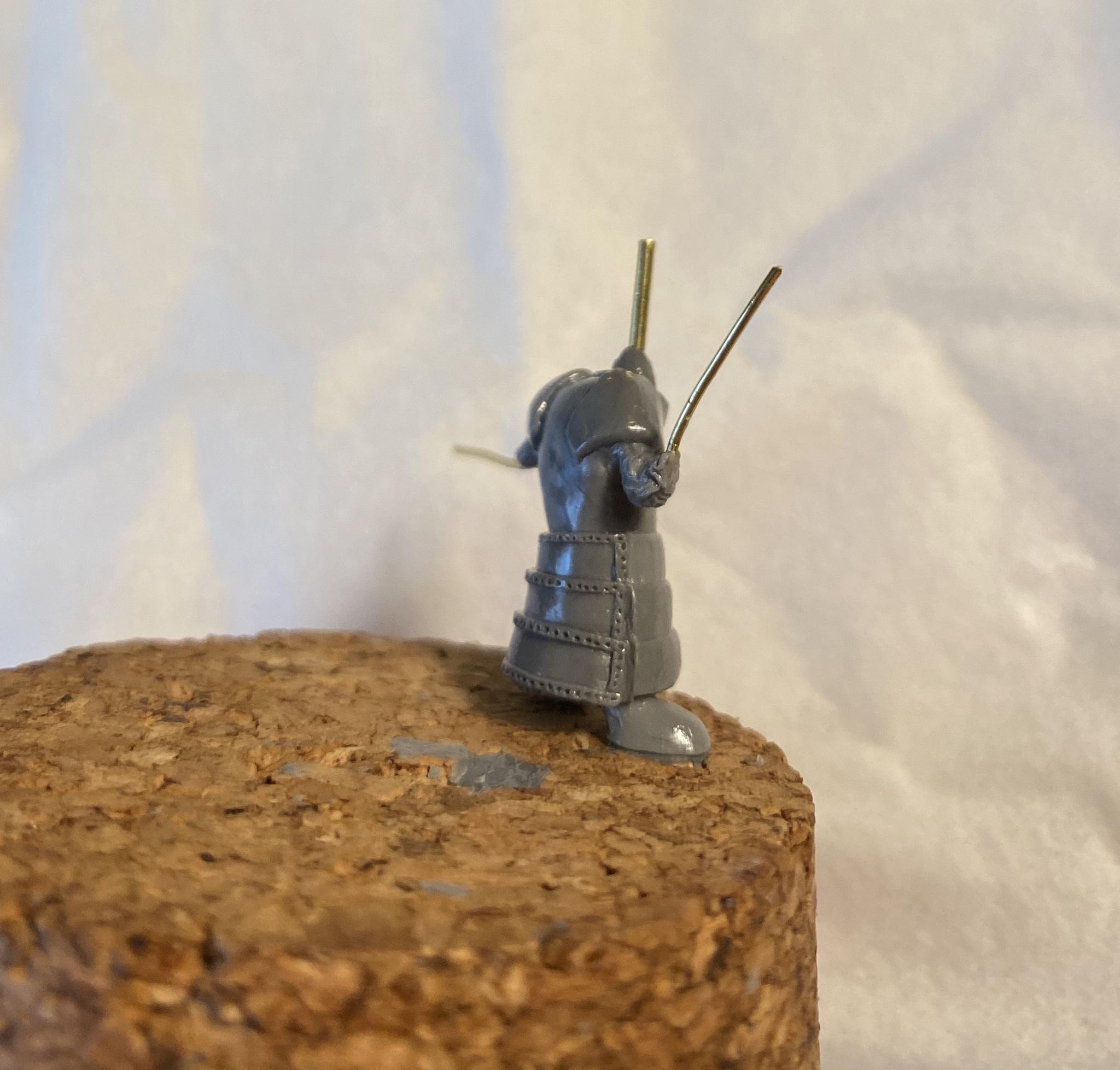 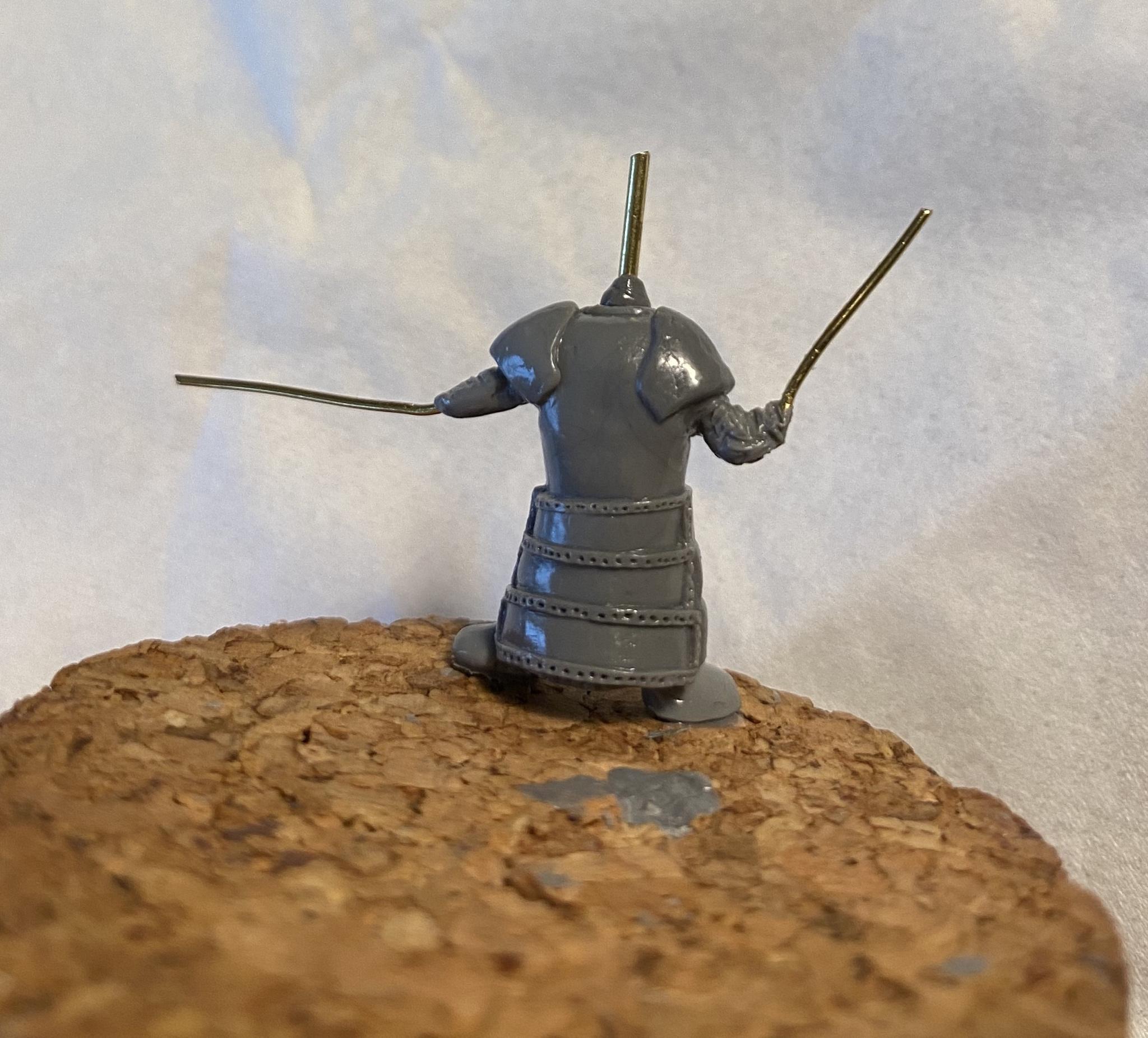 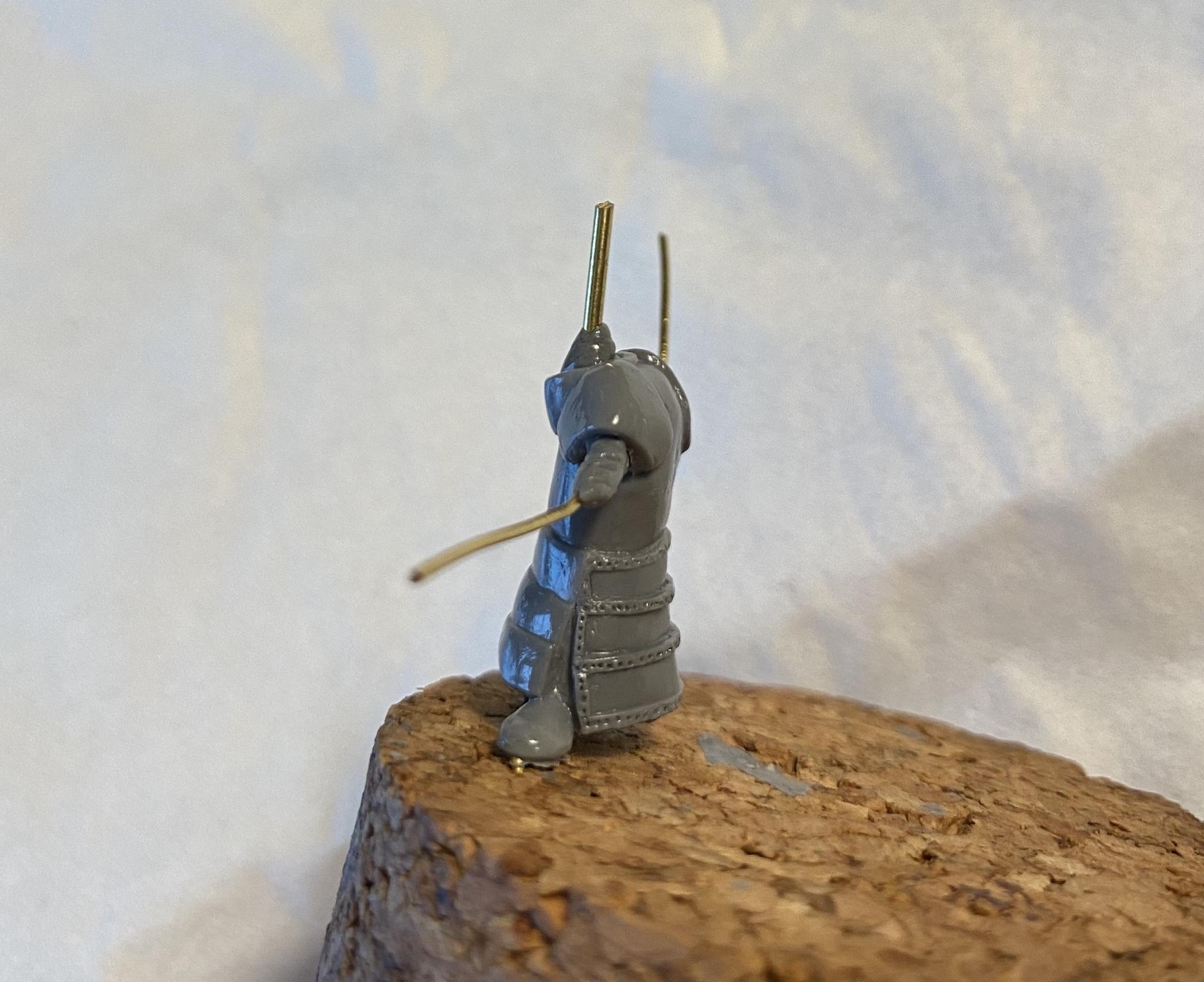 The front plates and the pauldrons will get the same treatment, and then I’ll start worrying about the head. The gorget ended up being rather high, so I’ll have to see what I can do to avoid the dwarf looking too tall. Maybe only his eyes will peer over the rim, without the nose. We’ll see.

Nice to see the sculpting steps. Looks like you needs tonnes of patience( i dont have) and many days to let each bit cure. I keep thinking he is a bit skinny and a bit tall. If you make him a hunch back and add a little to his gut maybe he ll look a bit more squat. One day ill probably be buying your sculpts/casts one day! Haha

As to waiting for parts to cure, that depends on how afraid you are of messing up stuff that you’ve done before - I for one am very cautious in that respect because I’ve already had a lot of simple, avoidable miseries such as fingerprints on the putty. From my limited experience, a few hours of curing are enough for Procreate not to get ruined by a stray finger or tool, but for me it’s still usually just two (max three) sculpting sessions per day.

He is definitely on the tall side, despite my precautions. Not much to be done about that now, I’m afraid, except being careful with the head. But I’d like to add some Chaos-Dwarfy ornaments to the breast- and backplate, which should make the torso a bit bulkier.