I have not been able to work on my sculpt for some days, so this took longer than expected, but now all the trims are in place: 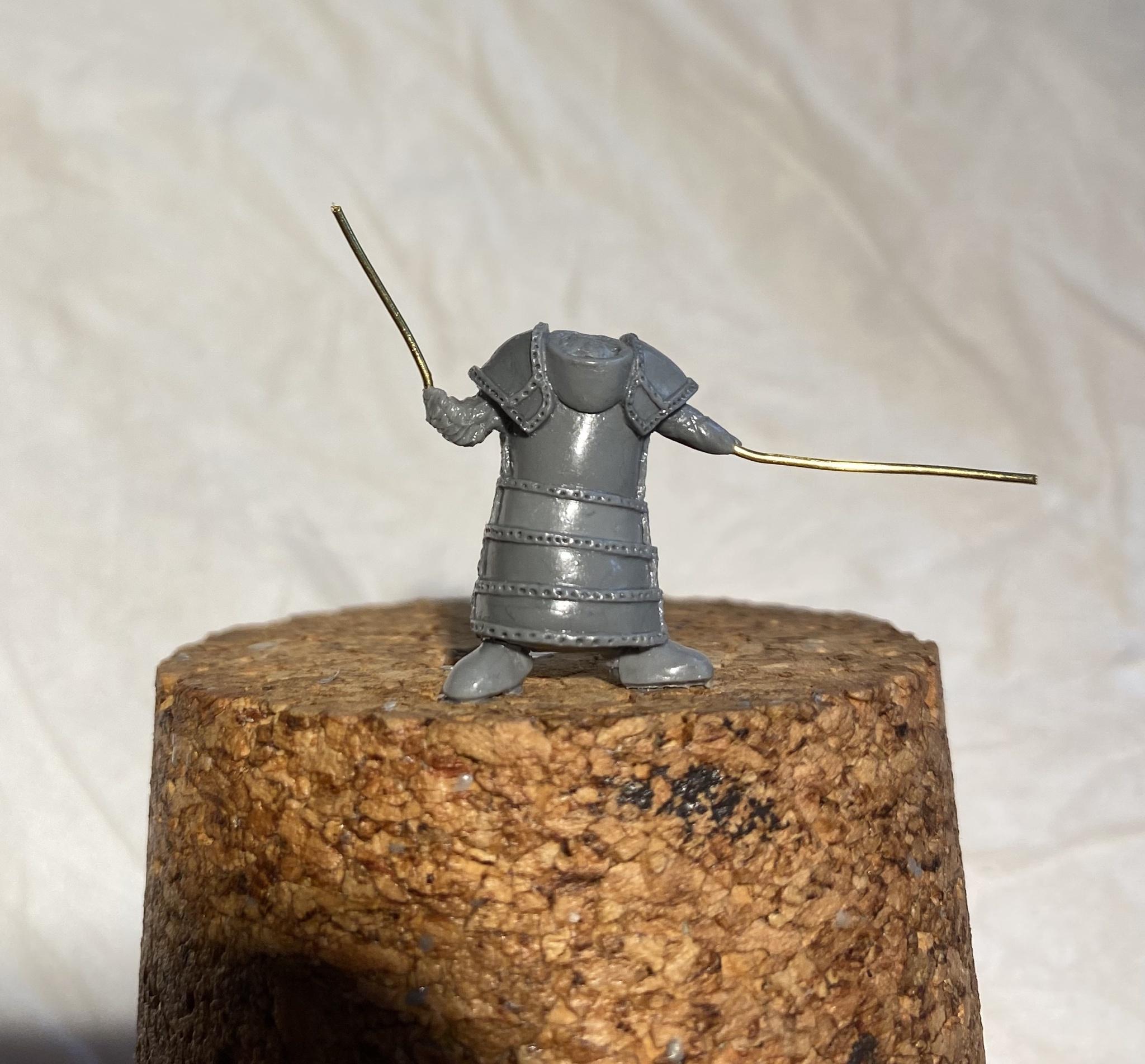 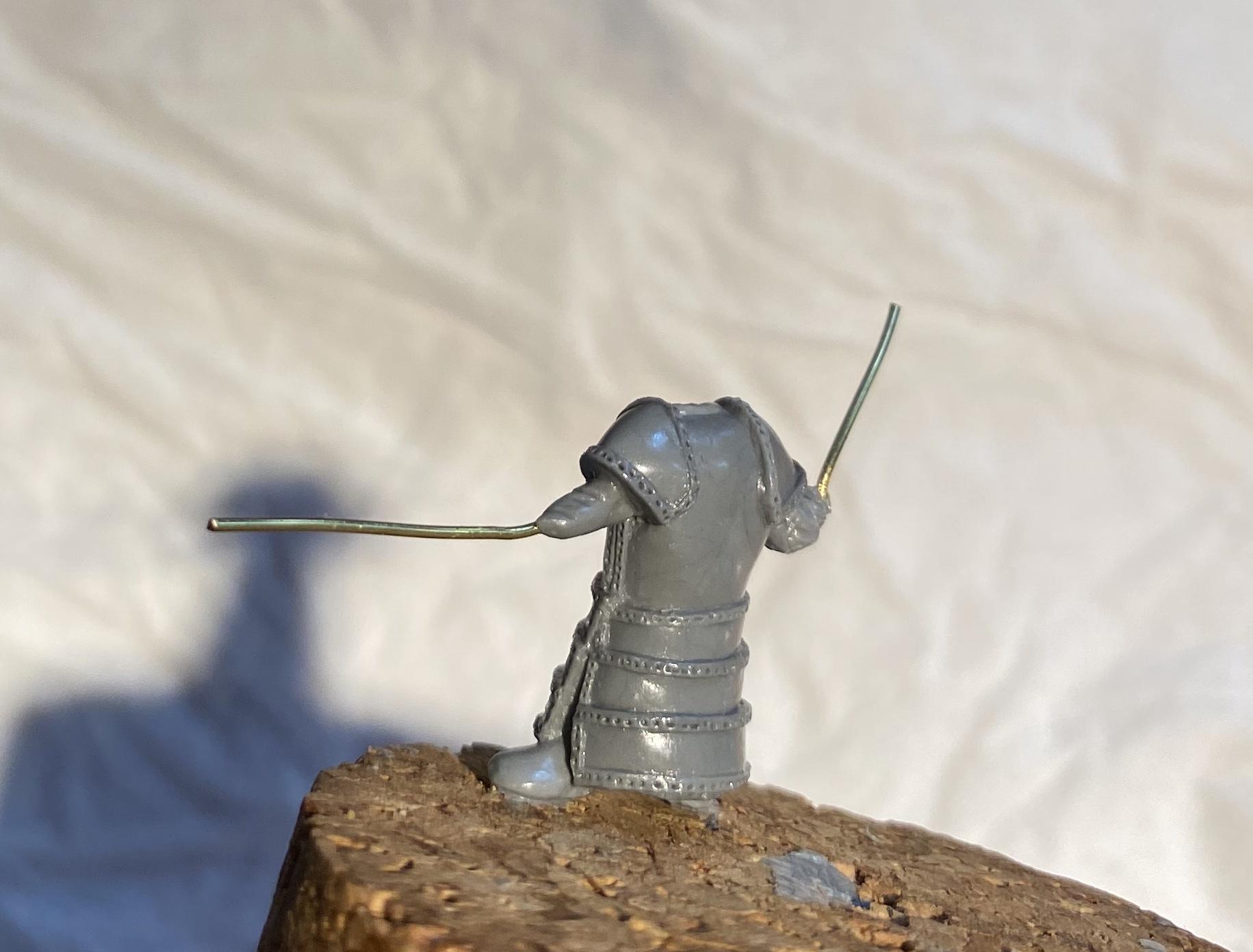 I’ve been growing increasingly unhappy with the gorget; I can’t help feeling that the dwarf’s proportions would be way more fitting if his face were to be exactly in the place where the gorget is right now. So I think I’ll take a knife to the front part and re-sculpt it to be a bit lower down. Here’s hoping I won’t mess up any other part in the process!

Yes, cut away the gorget. You could possibly sculpt a new, small gorget for the back of the Dwarf’s neck, sticking out horizontally.

Cut away the old gorget, made a new one (including a crude base for the head)… 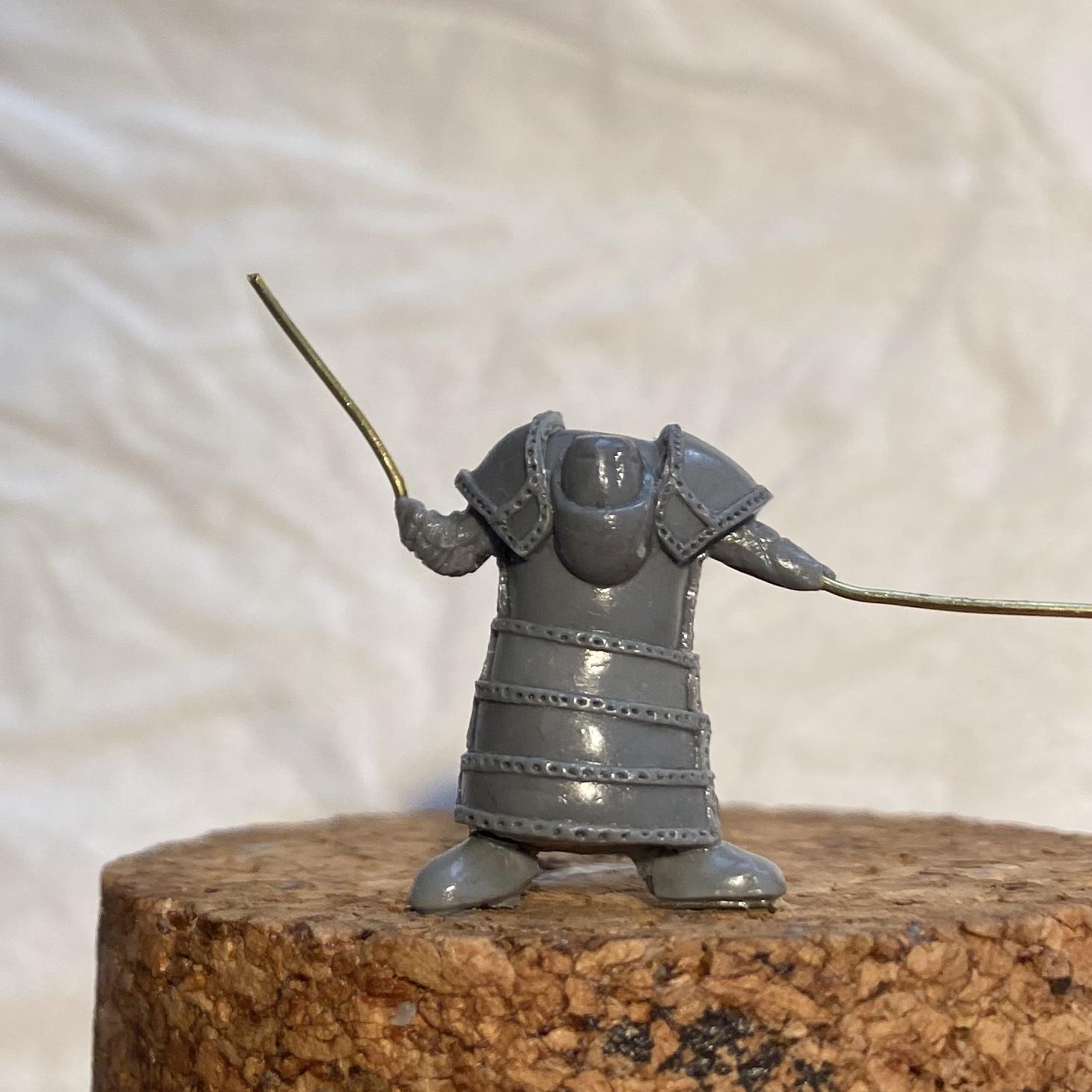 … and added some decoration. 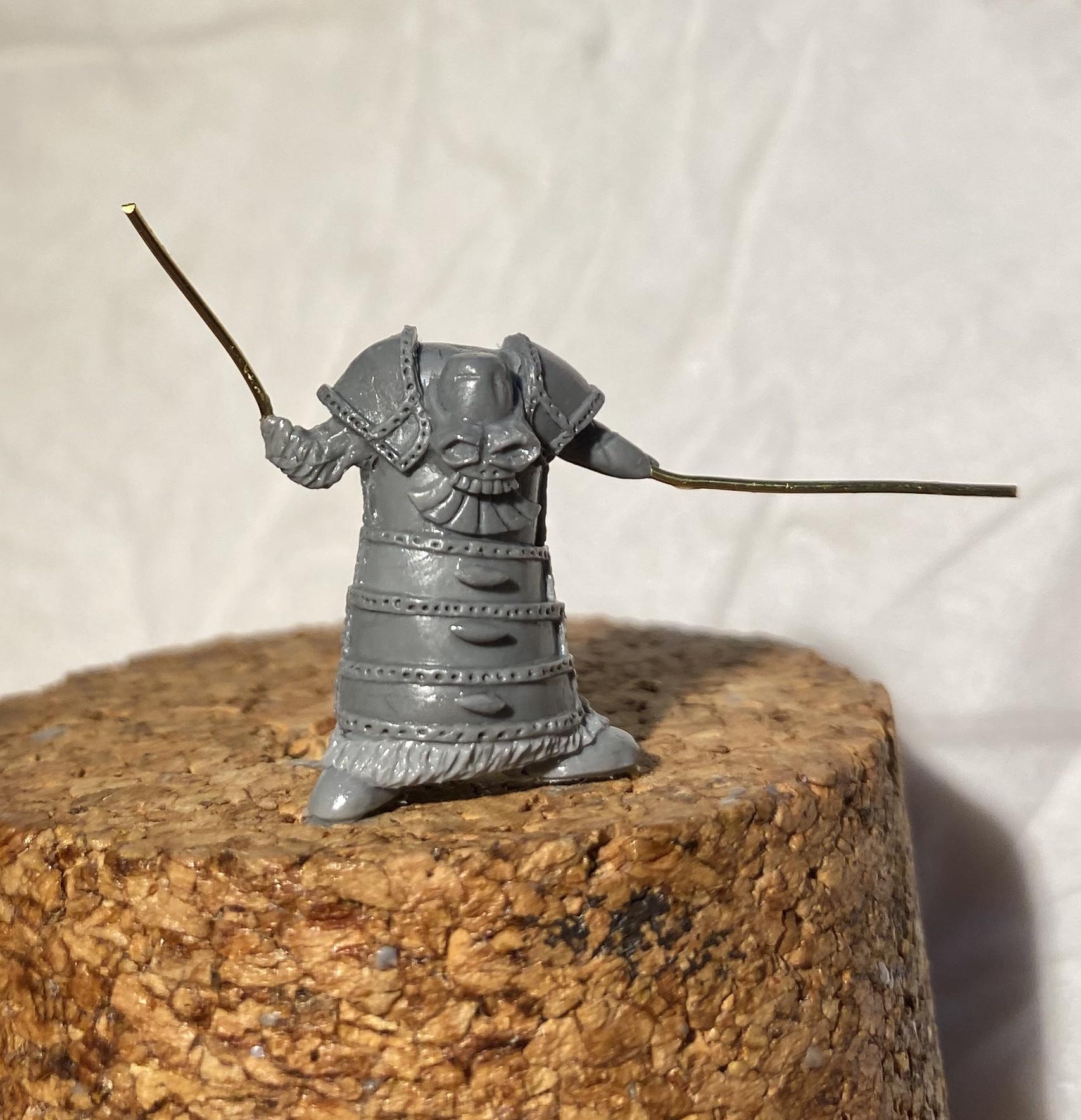 Those ugly lumps on the waist/leg armour will become the straps connecting each segment to the one above. The end product should be more pleasant to look at, so please don’t mind them for now.

Amazing progress - looking forward to seeing this as a completed character

Some really lovely stuff going on in here and great conversions. I love the tiny, but critical changes on your Bull Centaur (combining the Chaos Warrior weapon handle with the Tomb Kings khopesh and such). I also really love the chains on the Chaos Steed - really beautiful look there.

So fantastic seeing someone’s sculpting journey and you’re off to an amazing start and only getting better! The more I see of this dendra-dwarf, the more I like the armour style too

It’s amazing watching this guy slowly come to life. I keep meaning to try my hand at sculpting, but never seem to get up the nerve.

Thanks for the friendly feedback, everyone! The community here really keeps one motivated to press on.

At the moment, I’m working on the face, so the next time you see this dwarf he should already have more of a personality. It’s a slow process, though - I proceed in very small steps with faces in particular, for fear of making a mess of it. Still, sculpting a face does not make me feel half as anxious as painting one!

@HashutsBlessing I’m very happy that you like that Bull Centaur Lord. He’s still one of my favourite conversions. To be honest, the chains were initially just a contrivance to hide the saddle on the steed - but they did turn out to suit the mini’s style, so that’s alright.

Here’s the face! I think it was a good decision to move the head downwards. The dwarf is still rather tall, but the proportions are much better now than they would’ve been with the gorget in its initial position. 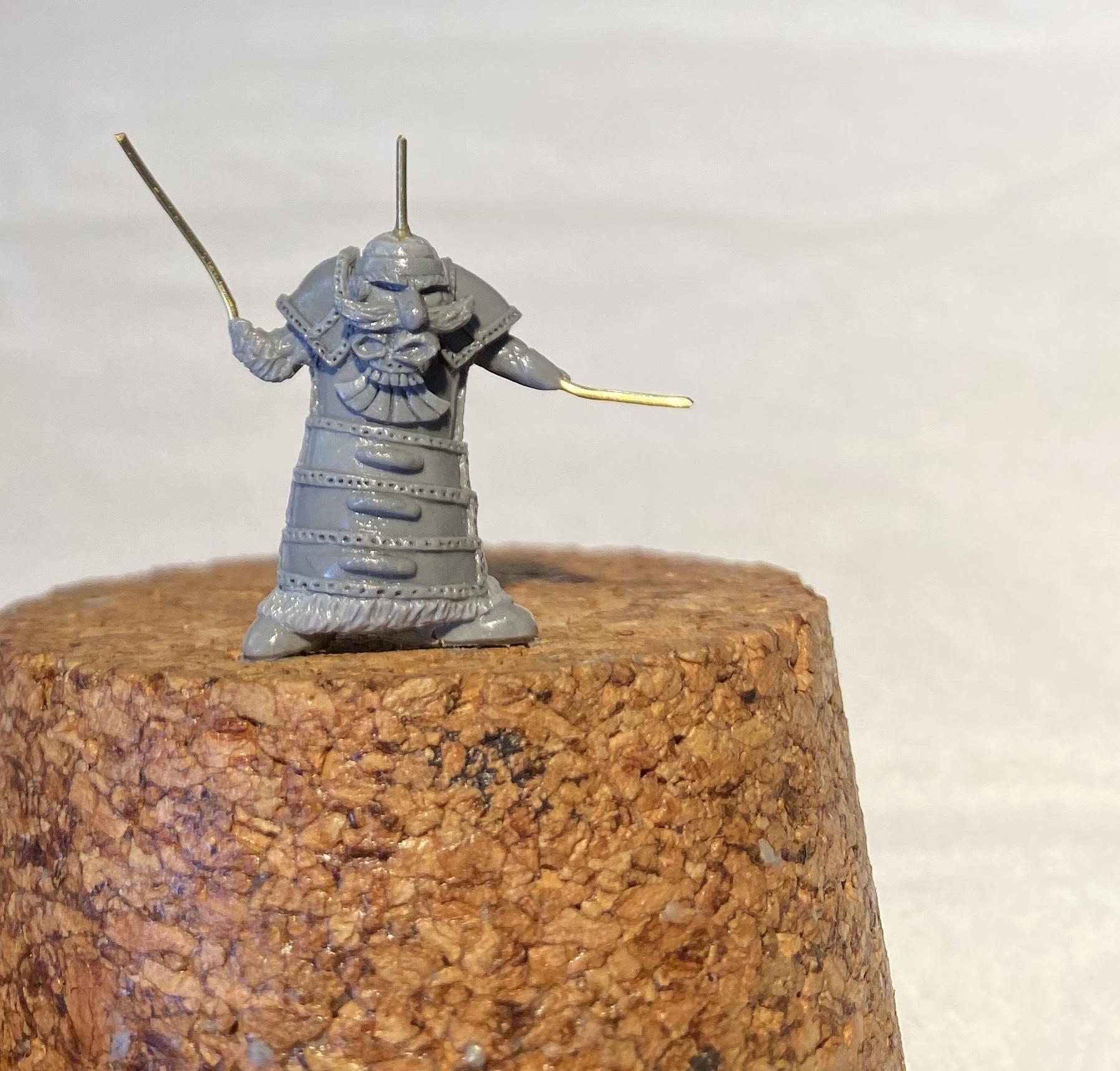 Also, a small announcement regarding the general direction of this blog for the time to come.
I started out with the intention of building an Oldhammer army, and soon switched to KoW. In any case, the goal was to build an army fit for a mass-battle game. Currently, however, I’m in a situation where I must be especially economic with my free time, so I’ve decided to henceforth focus on those aspects of the hobby which I have come to enjoy most, viz. sculpting and converting on the single-miniature-level, and to do so without haste or worries like “I’d love to do A, but my army really needs a unit of B, so I should do that instead”. So I most probably won’t be posting anything like finished regiments on this blog anytime soon. I’m hopeful that an army will be there, in the end, but it’s not top priority for my hobby at the moment. Thanks

@zoddtheimmortal Those Bull Centaurs are still happening, though.

I figured the chains were to originally hide the saddle, but as you’ve said, they really suit the final look as well!

It’s a shame you have to be wise about hobbytime, but it does mean your minis will come out with a personal touch each and you know you’ll love them because of the time you spend with each. Maybe we’ll see massed ranks in the future or over time, these individuals will form up and you’ll have an army of individuals, steadily getting more impressively sculpted as time goes by!

After a GH-induced break, I’m now back at work on my sculpt!

Currently I’m working on the helmet, and I hope it won’t take me too long to get it finished. In the meantime, here’s a picture of its current state to show in which direction it’s going:

My plan is to have the upper two tiers lined with tusks - in the middle one you can see a hasty attempt that I made just to see how it would look. The final tusk-pattern will be done in a new layer over this one.

The lowest tier’s surface will stay plain, but it’ll have a bull’s head for decoration. The base for that is already in place.

Looking pretty good. You started with a very stiff upright pose (guess it was needed to be able to place him in the chariot), so from now on its the small details and decorations that will give the sculpt a more dynamic look. I feel the pauldrons could have been a bit more bulky but thats more a personal style preference. All in all very promosing work, look forward to seeing the end product!

A big thank you to @Admiral for this tutorial - I wouldn’t have known where to start making a boar’s tusk helmet without it.

Neither the tusk pattern nor the bull’s head are perfect, but I knew when I started out that perfect was not within the scope of my skills. Both are recognisable, I think, and I’m pretty happy with the way they turned out.

My wife observed that with the skull-shaped gorget, the dwarf’s face, and the bull’s head, that’s three faces on top of each other, which may be a bit much. She has the right of it, I think.

But at that point I was already committed. Anyway, the paintjob will probably help to alleviate the face confusion.

Now that I’m about to progress to his arms, I’d like to ask you good people for your opinion: The dwarf’s left arm was intended to end in a fist, probably with a handle; when placed on the chariot, it was to give the impression that he was holding onto it. However, I’ve realised that he is actually a bit small for the chariot (the original Mantic driver being quite large), and I will have to make him some kind of platform within the chariot box to stand on. Now I thought: If I have to make him a platform anyway, why not do some basing trickery so that I can take him out and use him as a single model as well? Magnets might be involved.

But here’s the problem: If I want to use him on foot, an outstretched arm with a bare fist won’t look great. Holding onto the chariot would look realistic, but then again, Chaos Dwarfs are obviously given to riding Lamassus or Tauri with a weapon in each hand and never seem to fall off. So I’ve been thinking about alternatives for the left hand - a gesture of command (perhaps difficult to sculpt), a hand resting on a secondary weapon (the right one will hold a polearm), perhaps a sceptre, or a whip?

So what do you think? Should I give this evil little guy an extra toy, or stick with the original fist/handle idea? Ideas welcome

In a rush at the moment, so will read and respond with potential tips later, but it’s looking marvellous from the pictures. Great job, @Antenor!

Here’s my entry for the last GH:

And some WIP pics:

1888×1567 396 KB
(That belt came off again because I behaved awkwardly with my sculpting tool, but I didn’t replace it since it turned out that the beard would cover the area anyway).

Unfortunatley, I didn’t take a photo of that one critical moment in the conversion process when he actually looked like a Squat trying on an Eldar helmet.

A long time ago (I must’ve been about 14) I made an attempt at a short story about an airship-borne Chaos Dwarf treasure-hunting expedition to Nehekhara. It wasn’t particularly good – in fact, it was so lacking in the article of memorability that I myself scarcely remember what happened in it (however, a detail I do remember is that the final battle culminated in a Tomb King being set ablaze by the Black Hammer of Hashut

). Maybe this story was present somewhere in the back of my head, but it only occurred to me when I had already set down the outlines of the project, and I’m fairly certain that as a teenager I didn’t imagine those CDs wearing khaki, much less pith helmets.

All in all, I’m quite happy with this conversion, especially the face - I might like it best of the few faces I’ve sculpted so far. For anyone interested in sculpting goggles, I can recommend this tutorial - it really helped me a lot.

Wow such dedication! Didn’t quite appreciate how much sculpting went into this (which is a compliment by the way - the finished figure doesn’t look “home made” at all and very very professional ) great work and a really original idea!

Cool conversion! The painting looked too much like an English colonial soldier, not chaotic enough. Nevertheless, really great work!

Thank you very much, guys! Glad to hear you liked the conversion. It was an interesting experiment, and a great part of the fun for me was to do something that I hadn’t seen done with Chaos Dwarfs before.

The painting looked too much like an English colonial soldier, not chaotic enough.

Well, that means I got that khaki right!

Yep, loved the different take on this, great colour choice and great idea!

While Im not (still) a fan of hats these are very good, well done.