Actually if you did an option for a bare head the right hand could carry a hat!

A right hand on the shield would be problematic in any phalanx/shield wall unless it is a unit of left handers.

I may have expressed myself poorly here. What I meant was something along these lines: 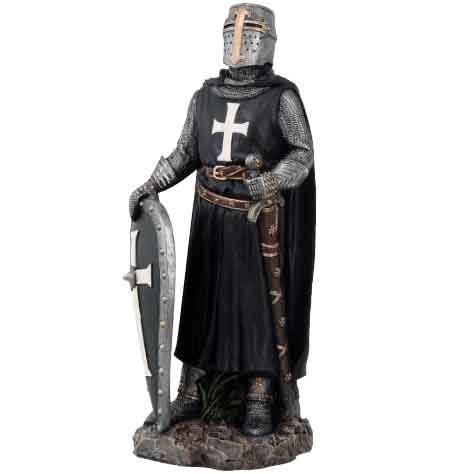 So, a position with the shield at rest on the right side. In battle it would of course be worn left (I gave him the scabbard on the left side, too, so the right hand would wield the sabre in combat).

Actually if you did an option for a bare head the right hand could carry a hat!

Concerning blunderbuss positions, yes, there are a few viable options, but I’ll stick with just one in the end. It’ll take me long enough to do that

Thanks for your input @Uther.the.unhinged !

i like a lot where this is heading!! bravo!!

Happy to be of any use with ideas… certainly would’nt be with skills.

I get the shield idea now. Given the blunderbuss vibe it could be move a pavise with blunderbusses on the back 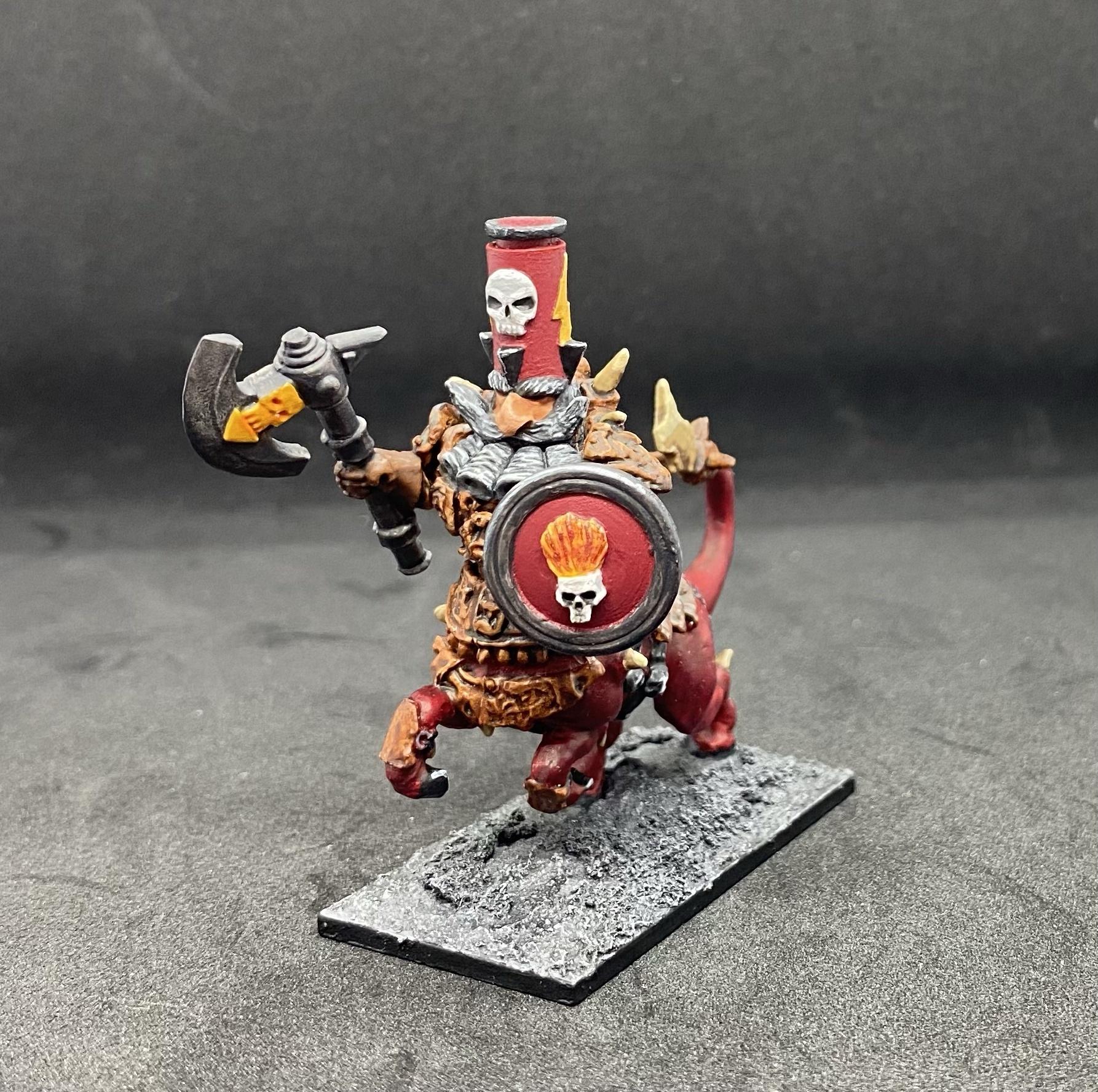 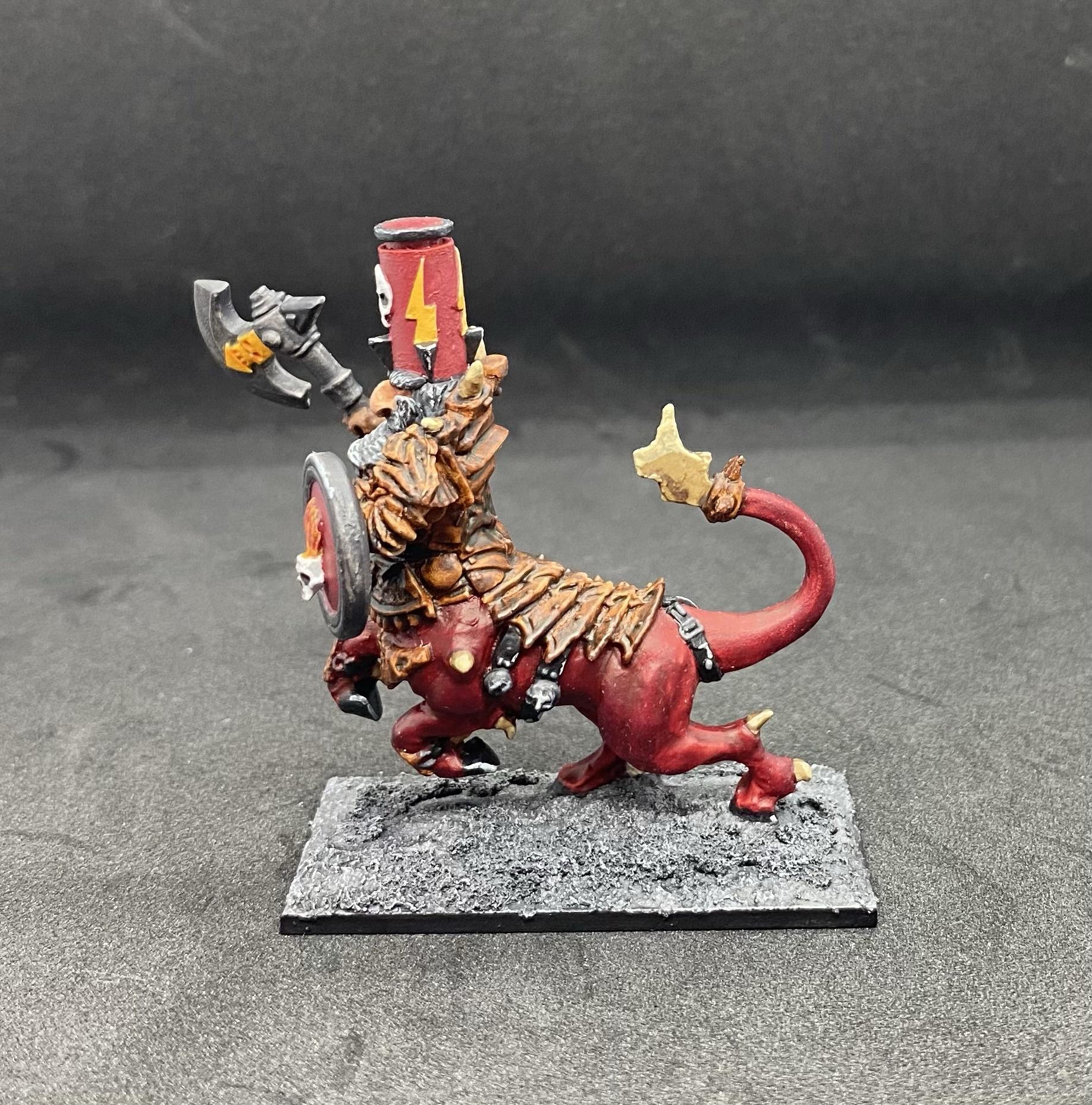 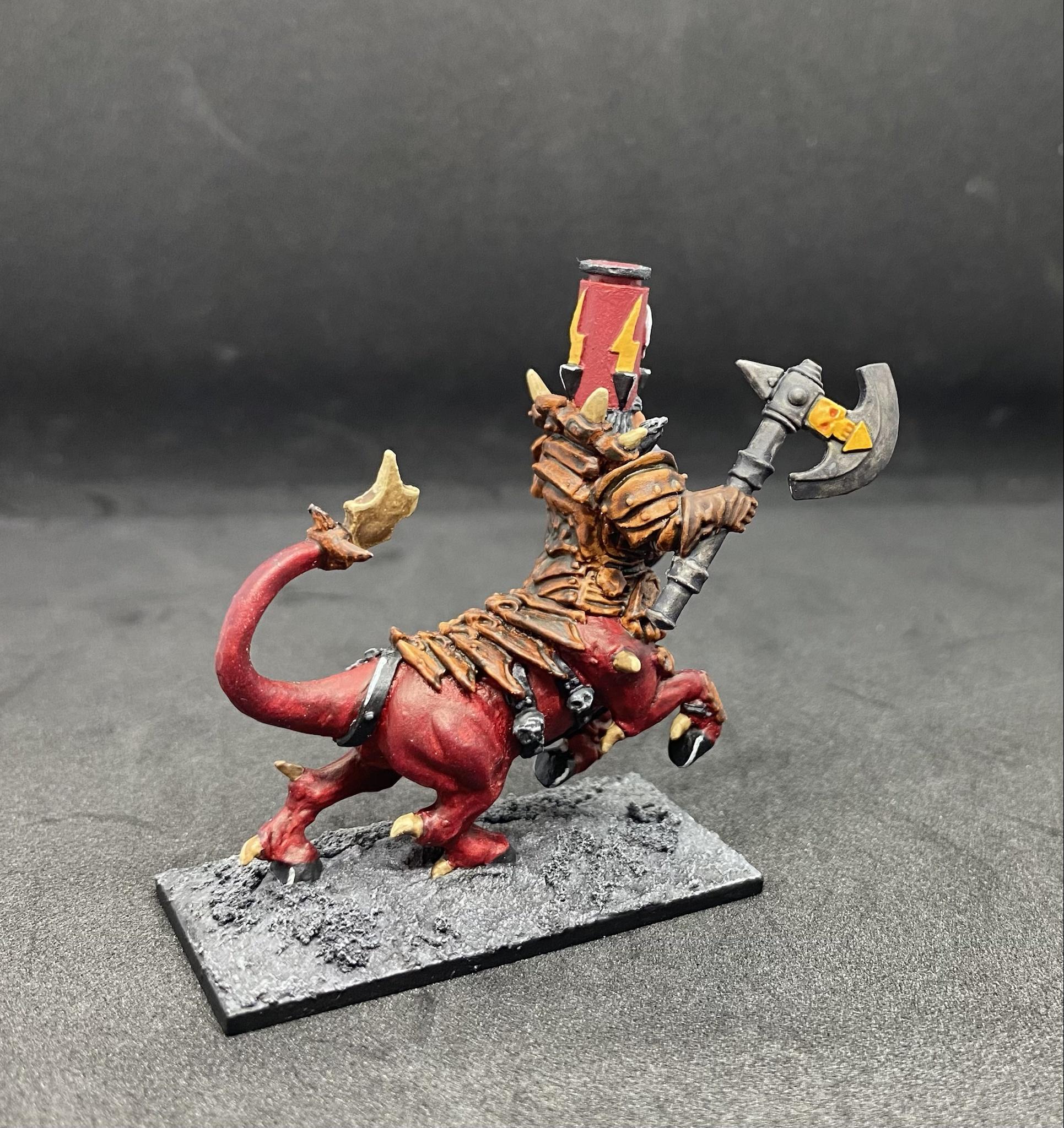 This was a bit of an experiment for me. I’ve gotten the idea into my head, well, not exactly to paint NMM - I don’t have the skills for that - but in any case not to use any metallics on these guys. So I wondered if a satisfactory effect might be achieved with contrast colours, and I must say that from a tabletop distance I could actually be persuaded that this guy is wearing bronze armour. The axe and shield rim also look reasonably like steel, I think. All in all, I like the result, especially measured by the relatively low cost in time and effort to achieve it, so this is how it’s going to be!

The red on the quadruped body is also contrast colour. It certainly saved me a lot of time, but still this model took me a good deal longer than I had hoped. But now that I’ve figured out the scheme, the other six might go more swiftly. Perhaps I’ll do them in pairs.

Always glad to hear feedback and criticism! Thanks for taking a look.

Facial hair look bit bland, otherwise I really like him.

This is really interesting. You’ve made a kit that I’m not a massive fan of really shine here. Made me see it’s potential. You’ve leaned into the lizardy strangeness of the halfbreeds but brought it back to the classic 90s with the dwarf half. Impressive stuff mate. Cool model

Thanks for the feedback, guys!

Facial hair look bit bland, otherwise I really like him

You’re certainly right about the facial hair. It’s basically just black and a drybrush - maybe I’ll do some playing around with beard colours for the others.

This is really interesting. You’ve made a kit that I’m not a massive fan of really shine here. Made me see it’s potential. You’ve leaned into the lizardy strangeness of the halfbreeds but brought it back to the classic 90s with the dwarf half. Impressive stuff mate. Cool model

Thank you! I’m not an avid admirer of this kit’s quadruped bodies either, but it may be the largest amount of BC conversion fodder to be had for the money.

As you pointed out, I mainly rely on the dwarf part to convey the classic CD feeling, and it’s mostly Fuggit’s hats that are doing the trick.

On a side note, looking at the painted thing, I’m really content and even a bit surprised about how well that sew-on button works as a round shield. I’ll note that down as a cheap source of conversion material proven viable.

The next pair is already in the works!

Ah, nice to meet other fans of Dendra armour! Have to check that mod, too, as I have tried to find one to that period for decade or so for TW games. 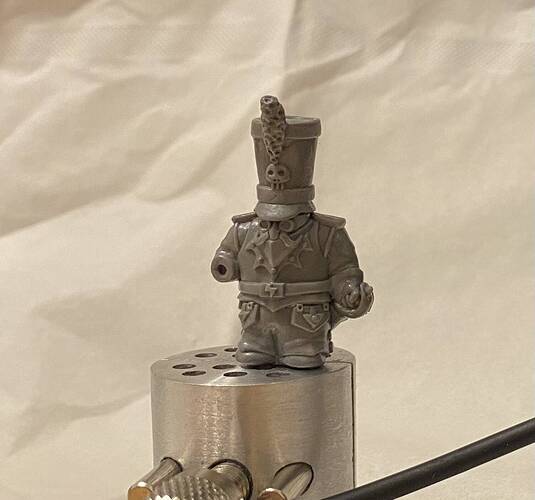 I’ve been out of town for a week and, a small set of sculpting equipment being infinitely more transportable than a painting setup, used a few spare hours to work on this shako. Now… back to painting Bull Centaurs, or continue sculpting this fellow?

Ooof, you’ve done such a great job it’s hard to say anything other than keep going with this guy to be honest

I really like the way you went with the hat, that detail on the front is really different and really works for me

Is this guy one of a kind? He seems to deserve a be-shakoed army.

Thank you for the kind words, fellows!

I really like the way you went with the hat, that detail on the front is really different and really works for me

Thanks! I did most of this very simple skull in one quick go, just before going to sleep, fully expecting to peel it off again the next day; but then I found that it really conformed to the light-hearted, silly, comic-book kind of evil that I love in older miniatures, so I kept it. The plume reinforces that effect, I think, so I’m happy with the overall impression. Glad you like it!

Is this guy one of a kind?

More or less. In style, he’s the sequel to this sculpt and also meant to work alongside with it. He is one of a kind in the sense that I won’t make multiple dwarves like him in different poses. But he will get (probably) two headgear and weapon options, so there’ll be at least a certain degree of variation.

Ah, nice to meet other fans of Dendra armour! Have to check that mod, too, as I have tried to find one to that period for decade or so for TW games.

It is the best kind of armour.

You might want to give Troy TW a chance!

Alright, so I finally got my current sculpting project done!

Here are the single parts: 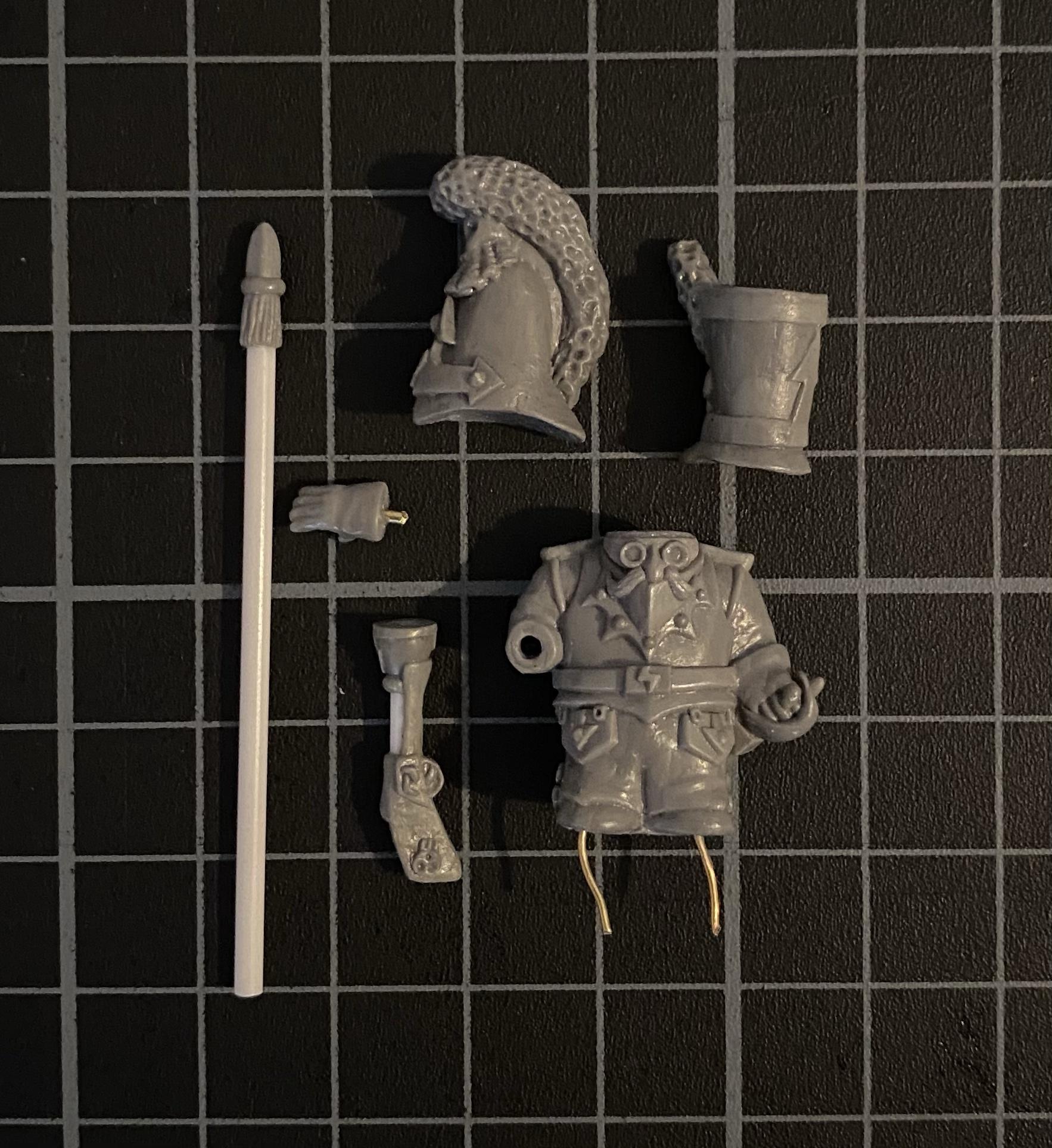 Originally, I wanted the melee option to be some sort of heavy two-handed weapon, but in the end, I went for a pike as it seemed to fit the aesthetics better. Also, I liked the idea of being able to build a pike-and-shot formation with these guys. In any case, the right hand is meant to accomodate all kinds of weaponry - convertibility is one of the prime features I require in a miniature, so it is only proper to apply this standard to my own sculpts as well!

I thought I might have them cast in sets of two, each set containing two torsos and right hands plus one of each headgear and weapon.

I am of course only an amateur sculptor, and accordingly, this miniature is very far from perfect. But I’m quite happy with the way it turned out and will certainly have a lot of fun with those evil little chaps. If the casts come out nice, I’ll see about making them available along with my first Napoleonic dwarf.

Below are previews of the two loadouts as I imagine them (please ignore the black stuff sticking out behind the right hand on some pictures, that’s just an epoxy component I used to hold it in place): 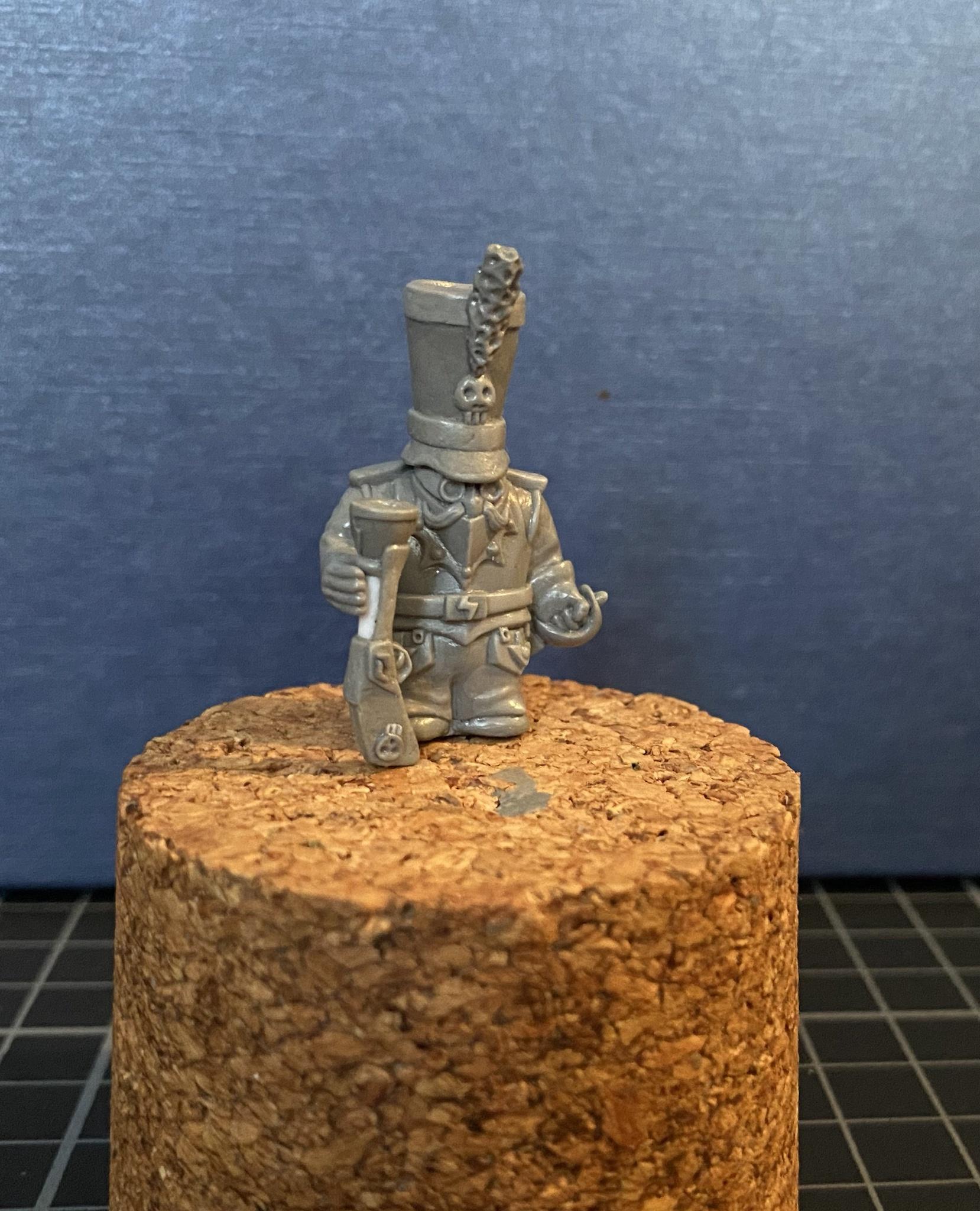 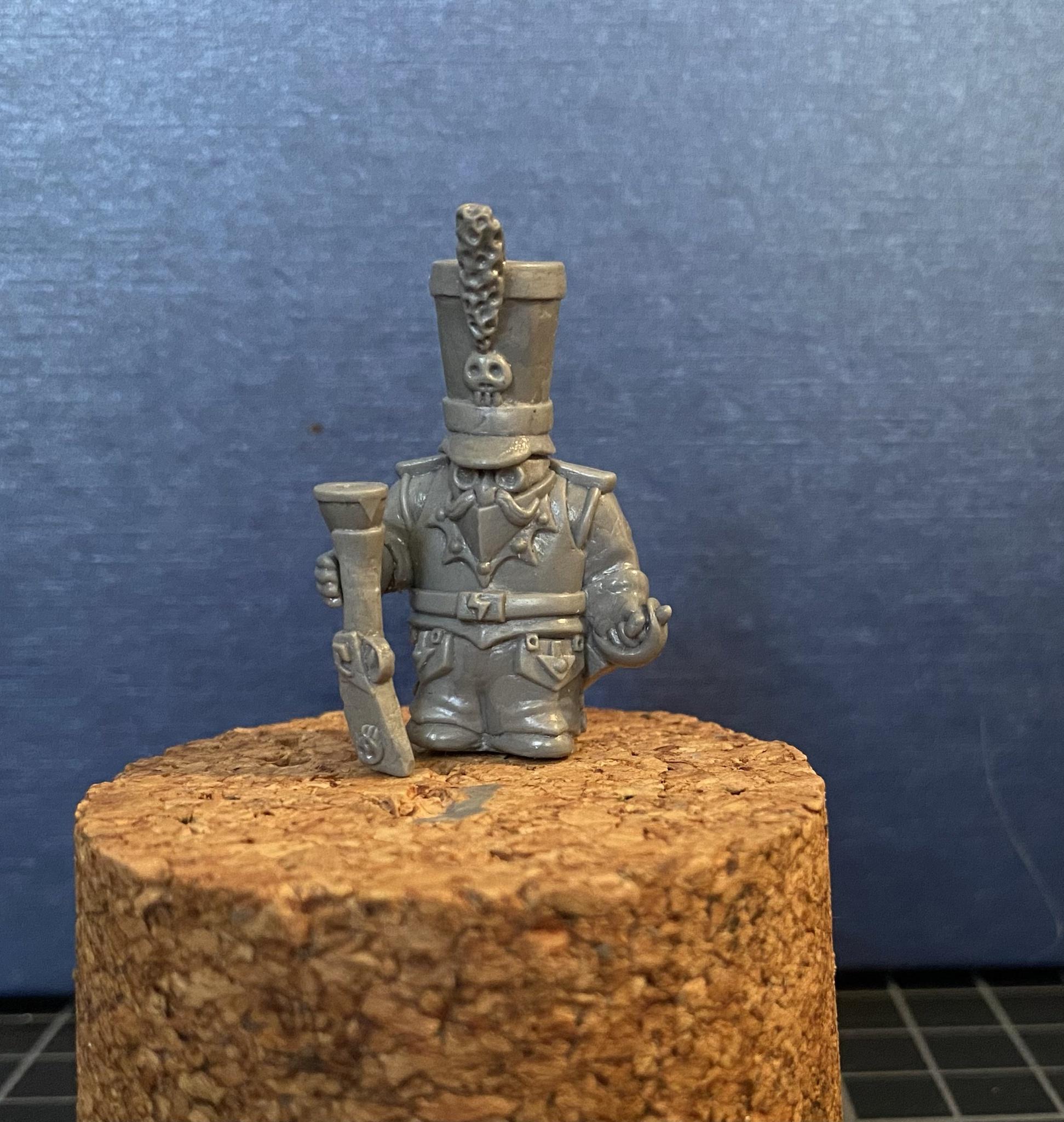 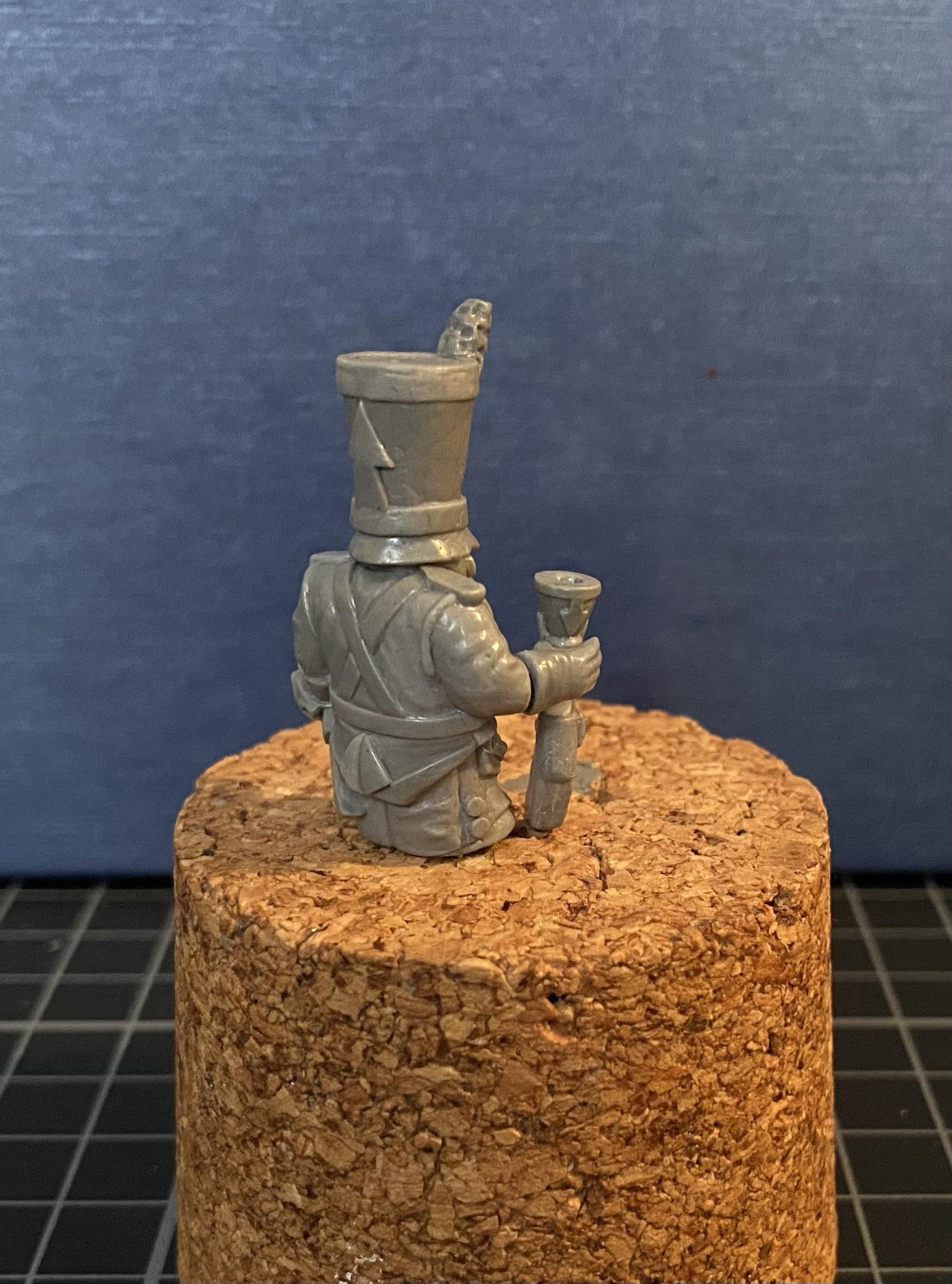 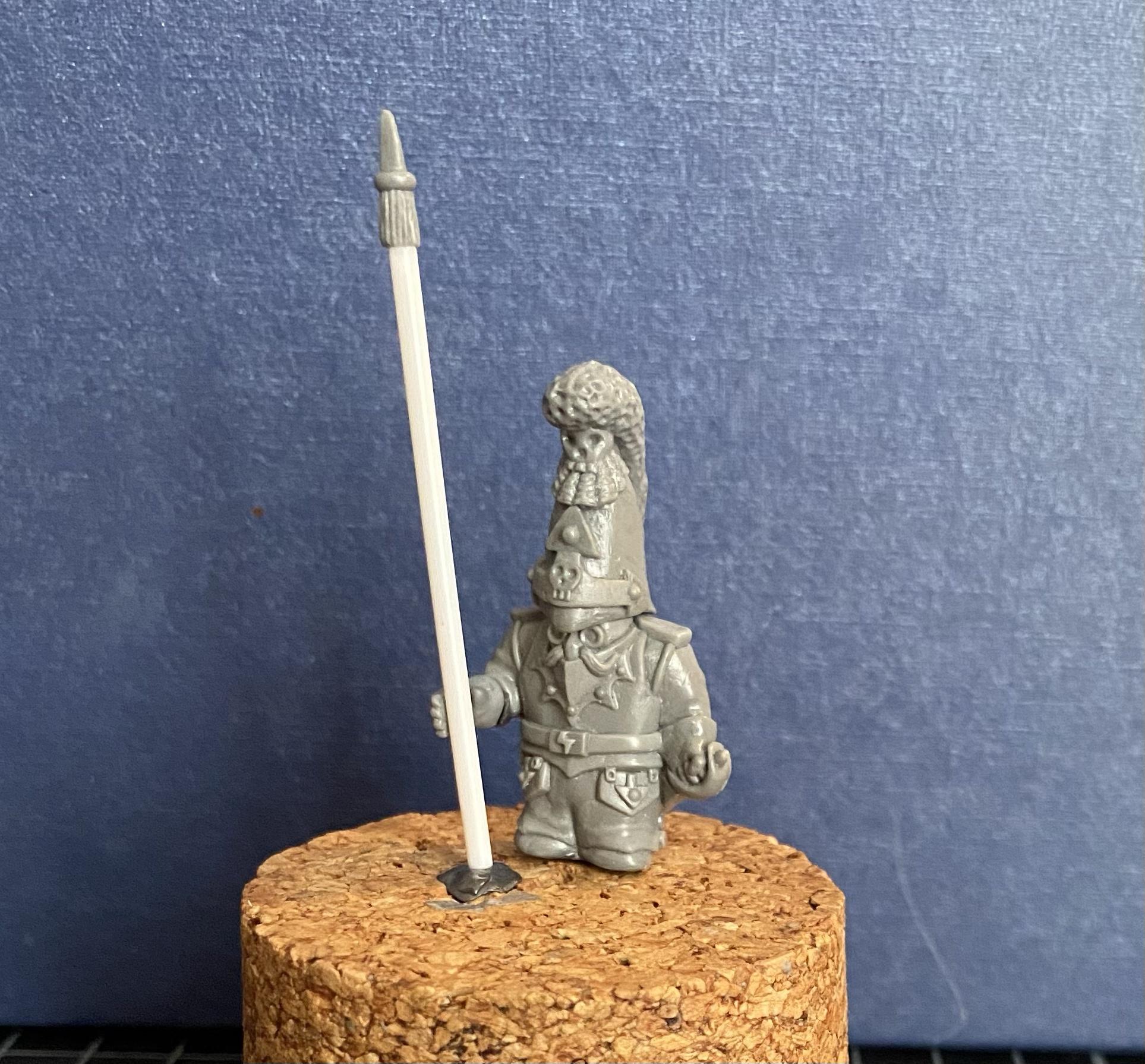 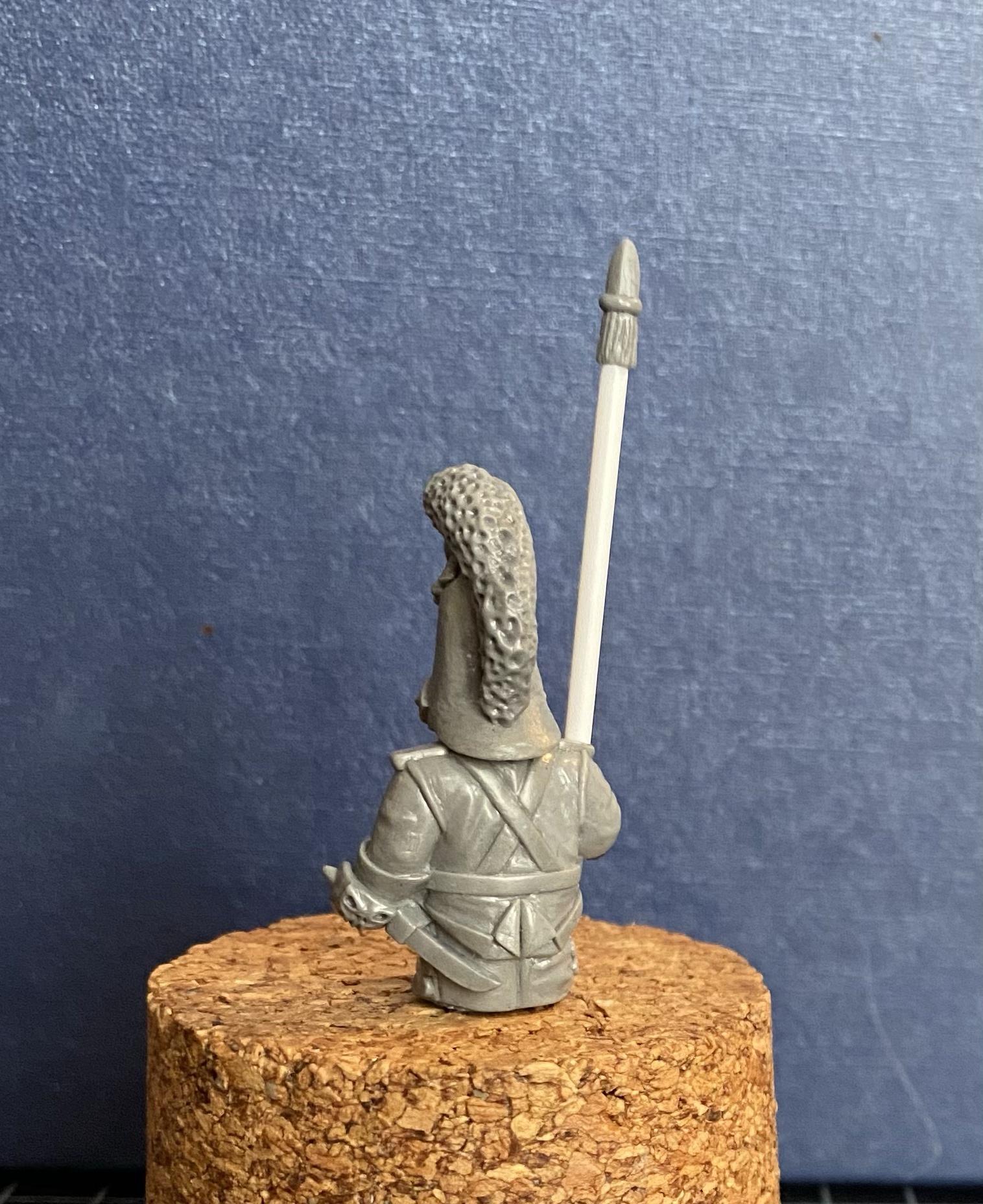 Of course, the bits might also be combined the other way round: 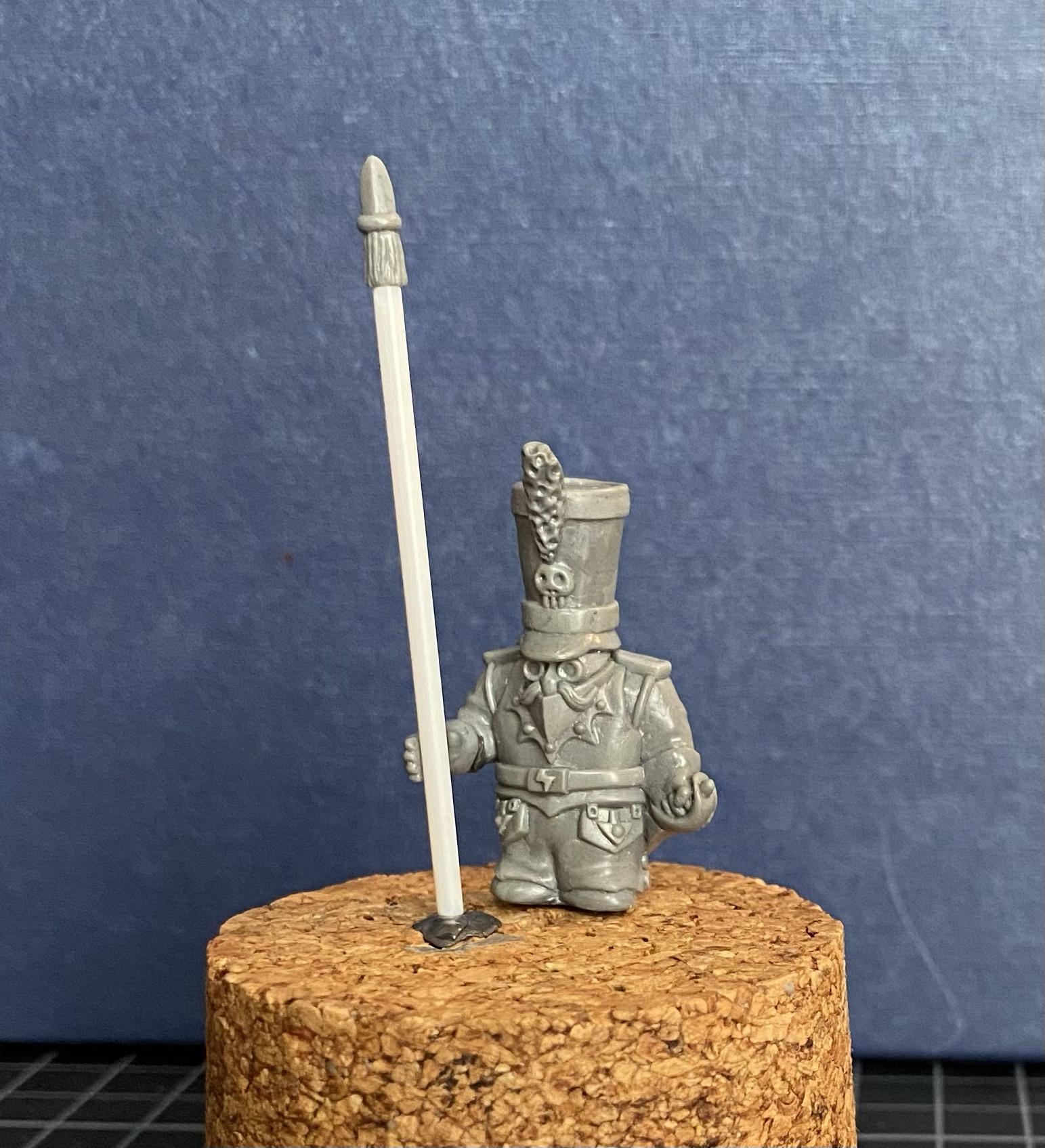 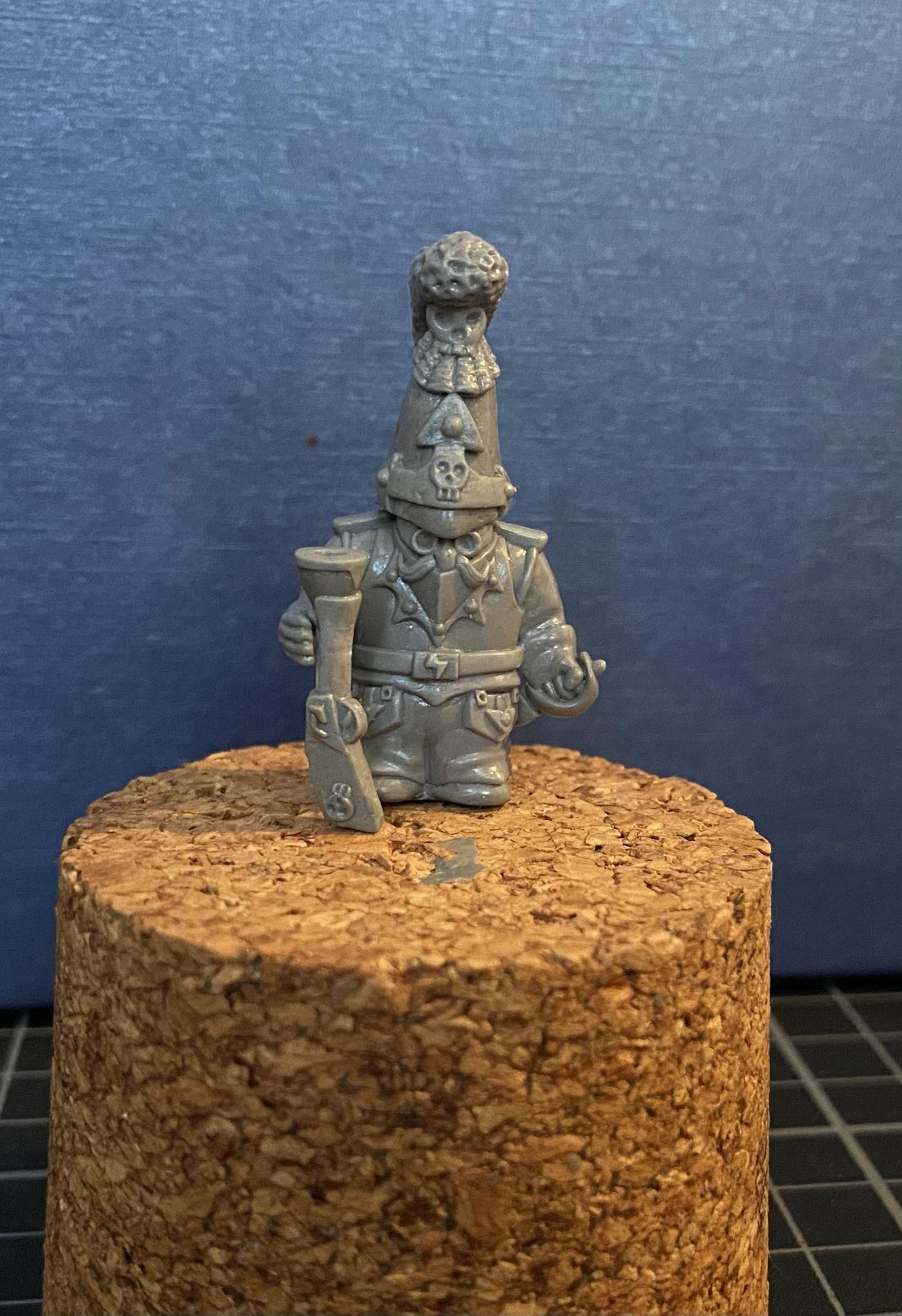 I’ll put the sculpt away for a few days now and then look it over once more with fresh eyes. After any last emendations that I might find necessary, it’ll be off to casting.

As always, feedback and criticism are most welcome!

I can only agree with Bowser, fantastically modelled and something completely new!

Great sculpting as always – I can’t wait for a whole regiment of these guys! From my point of view they look very mould-friendly – I’m fairly optimistic that they will cast well except for the pike perhaps: how about just casting the pike head, drilling a whole into it and gluing it onto a brass rod? Long shafts can be somewhat tricky to cast and they easily bend (or break if made out of lead-free white metal).