Nifty! The big hats seems almost too natural in combination with the Napoleonic style!

Love how compact he looks, very sturdy.
The left hand in the blade on the back is a real nice touch and everything ties together so well!
Very well done!!

Very nicely sculpted, I am curious to see what it looks like painted.

And dare I say rather adorable

Haha! Yes, everything about this is comical and intended to be so. Seriousness was never an option.

The big hats seems almost too natural in combination with the Napoleonic style!

Indeed, it’s not at all easy to properly exaggerate them! I like to think of military fashion in the early 1800s as essentially a big hat competition - that’s how I got this silly idea in the first place. 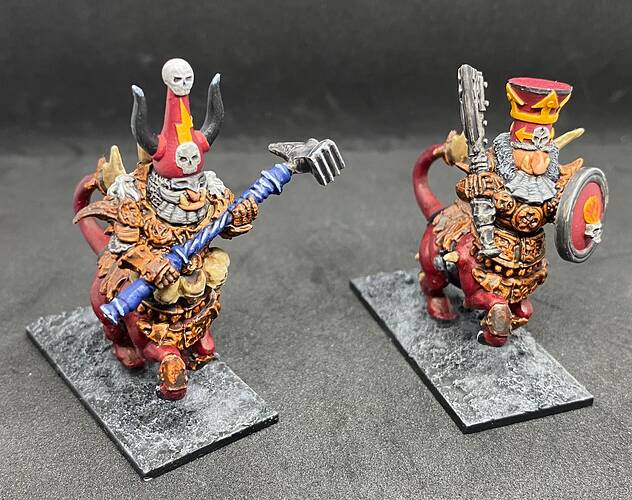 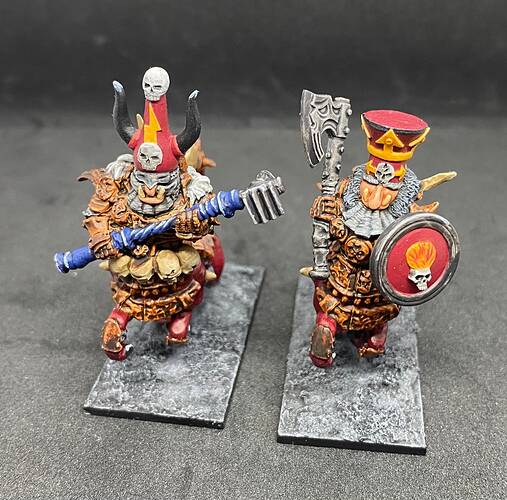 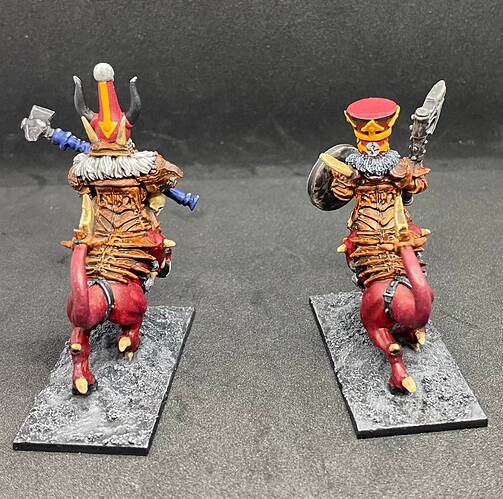 Those are some good looking bulls!

It had never occurred to me the sheer amount of variety and creativity that people would come up with, using the Admiralty Miniatures Big Hats.
It’s a joy to see them everytime, and I’m particularly delighted to see what you’ve done with them.
Those are Mantic halfbreeds, right?

Thank you very much! And kudos to you for sculpting those hats - they’re the life of this conversion project. I am definitely going to get the next set too when it drops.

Yes, they are Mantic Halfbreeds. They’re more of nondescript demonic quadrupeds than bulls, but in my opinion they serve very well as a base for cavalry-sized BC conversions. It’s only something of a hassle to assemble them, as the parts often don’t fit together well (the champoin’s skull belt is actually only there to cover an enormous gap between the dwarf and quadruped bodies

The napoleonic dwarfs are wonderful!

The tall hatted one would make a great cavalry dwarf as a body on centaur with pistol out, just dreaming but he reminds me of a french curaissier

Thank you! Haha, indeed, the most immediate inspiration for his crested helmet was the model worn by the iconic French carabineers: 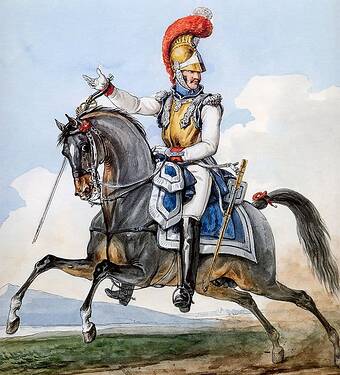 I’d actually really like to make a Centaur in this style - if I ever figure out where to start sculpting a bull. Some day perhaps

I’ve finally found a little time to get some paint onto two of these fellows, experimenting a bit with colour schemes, and I’m quite happy with how they turned out. It’s fascinating how different colours can make monopose minis feel quite distinct (at least to me 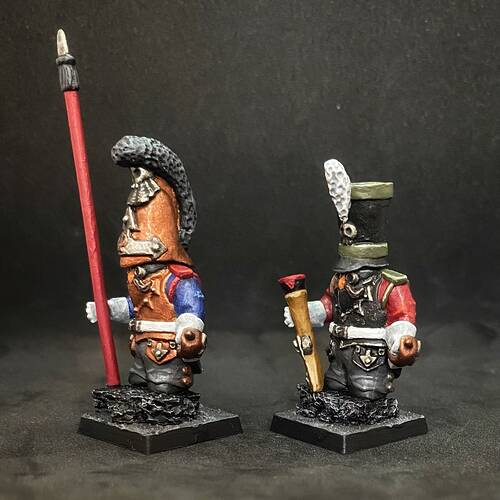 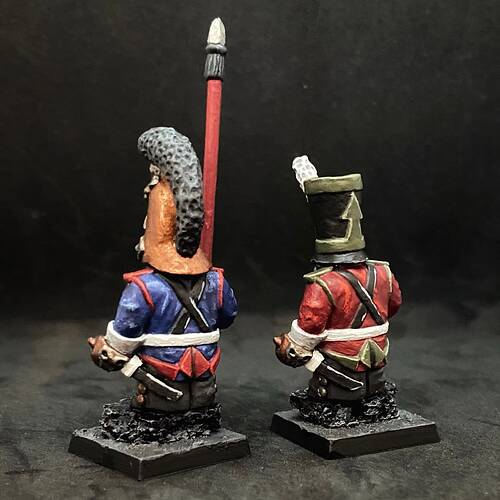 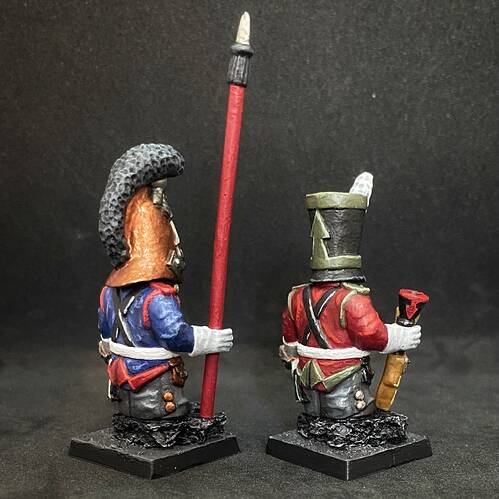 My next goal for them is to get two more of each variety painted - well, at some point - to eventually use them in the OPR skirmish game where the evil dwarves can, in fact, be equipped with spears!

Also, dear @rollforwounds , your cork-and-magnet basing method is a true life changer. Thanks again for that idea.

Nice paint job and congratulations – these look like very successful copies. Both colour schemes work pretty well in my opinion. Are they inspired by historical uniforms? The right one looks vaguely Bavarian but then again, I have basically no knowledge of Napoleonic uniforms.

Truly lovely. I always knew Napoleon was short, but now…

Bravo man! And good pictures too! XD
Walhpoleon watches you

Well spotted, @Anzu ! The pikeman’s colour palette is indeed inspired partly by the Bavarian Garde du Corps (whose uniform also featured the same basic helmet design), and partly by the Mexican Tulancingo Cuirassiers. The other guy’s combination of red coat and green facings was worn by the British 24th Foot.

Well… then I got it completely wrong as I thought that the right one is Bavarian.

First off, many thanks once more for the kind votes that won this fellow the Bronze Hat!

By now, most of you will know that I enjoy a mix of 19th century aesthetics and classic fantasy elements. I’ve always had a predilection for hussar uniforms in particular. The simple basic idea of swapping the regular pelisse for a scale jacket slung over one shoulder had been simmering in my head for some time, but so far I had never attempted to sculpt scale mail for fear of making a terrible mess of it - to say nothing of scale mail falling in folds! The GH announcement was the push I needed to try and make it happen at last. The impending deadline helped me not to obsess over imperfections but to aim at a satisfying general impression. The result is very far from perfect, but I’m happy with it. Shout out to @denelian5 for his tutorial, which was a great help!

On to some WIP pictures. It all started with a Mantic Halfbreed torso and an old Chaos Warrior head. That turned out to be a waste of a perfectly good bit, I’m afraid, as nothing of the face remained visible in the end. 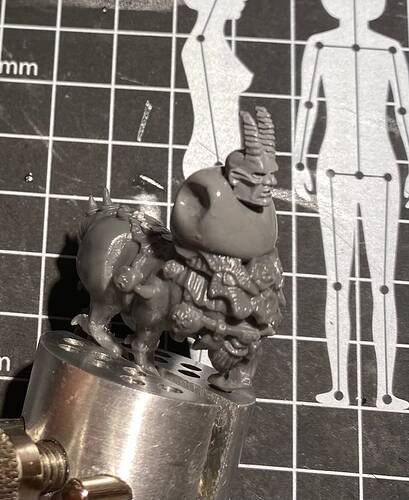 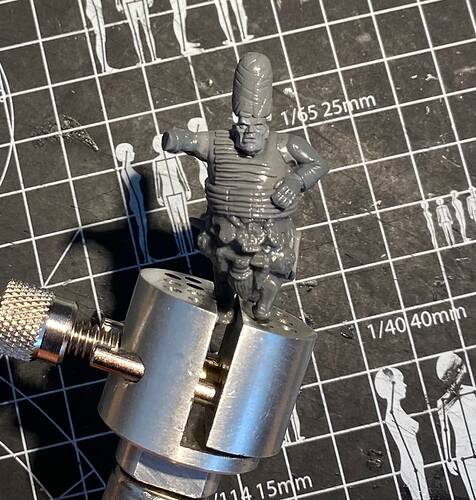 The original halfbreed’s back armour didn’t fit the aesthetics I was going for, so I decided to use the fur-trimmed scale mail of the pelisse on the bull back as well. Also, he naturally needed a sabretache.

The arms and hands are from GW dwarf kits. 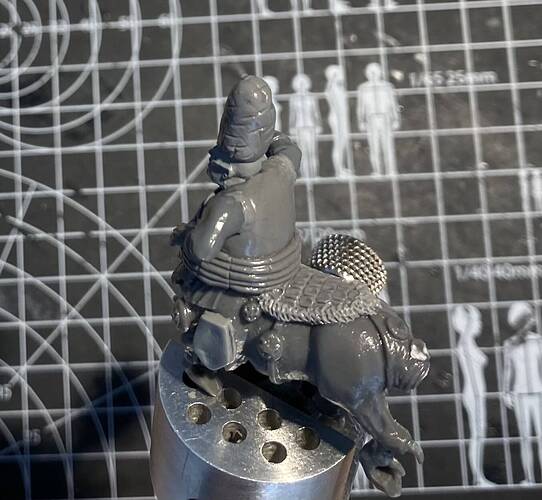 Some more work on the face and dolman… 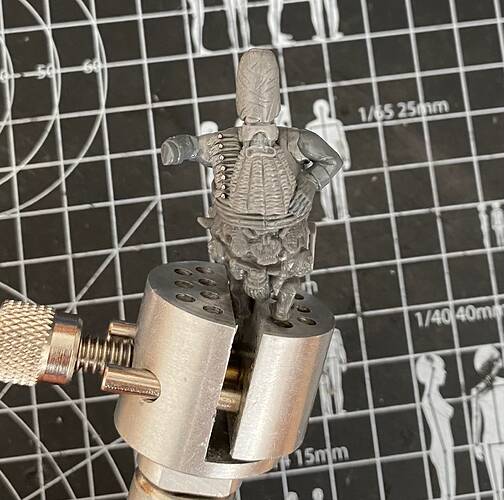 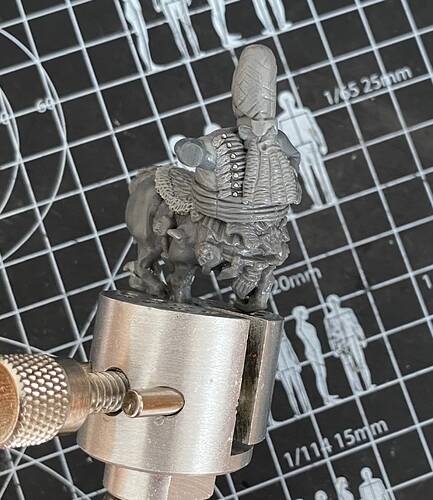 …more work on the face, kalpak (the skull is a bit from a Khemri chariot, as is the sabre blade), saddlecloth, and finally, the pelisse! I was pleasantly surprised at how nice the folds looked. 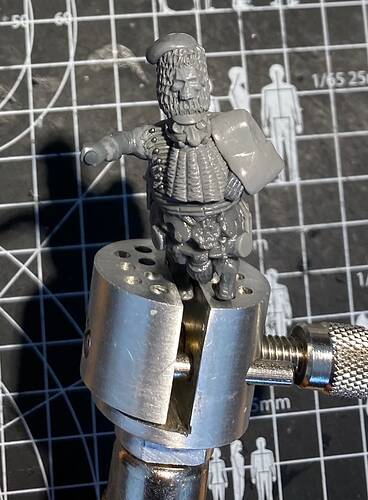 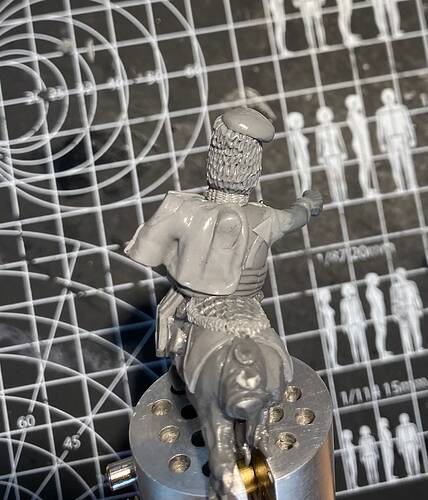 And here’s the finished conversion: 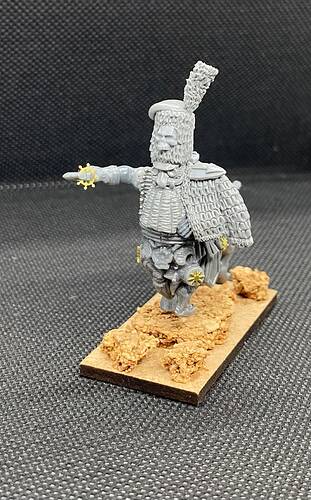 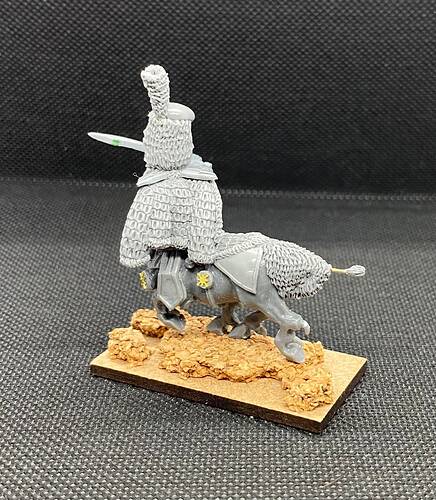 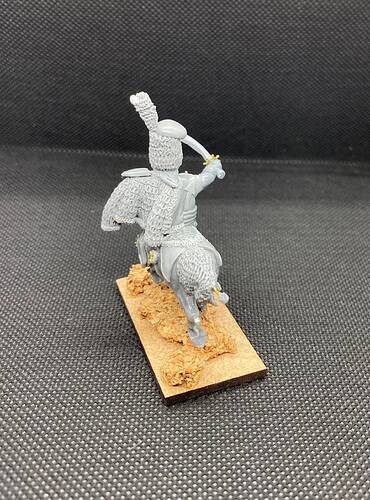 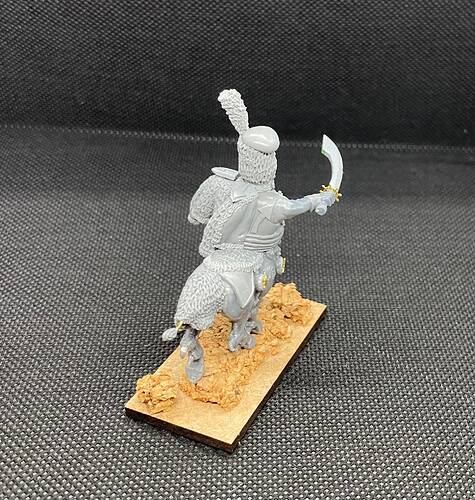 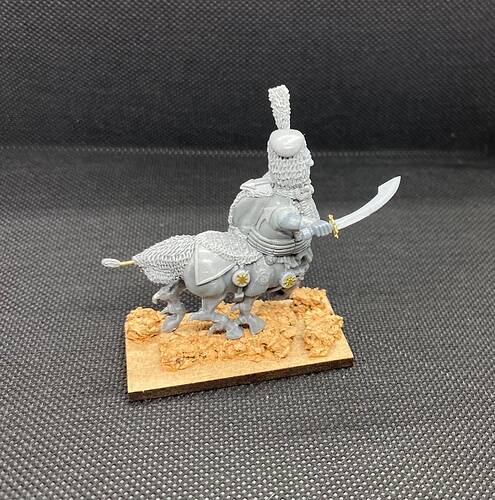 The colour scheme was hard to choose, as there is no shortage of beautiful examples in the history of hussar uniforms. Eventually, I took my cues from the same source that had already provided the inspiration for the kalpak’s design, namely Sweden’s “Yellow Hussars”: 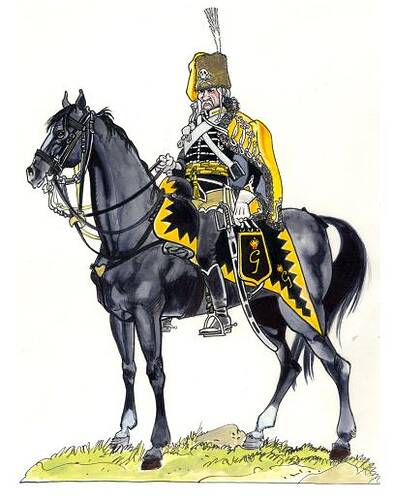 And this is the final result! 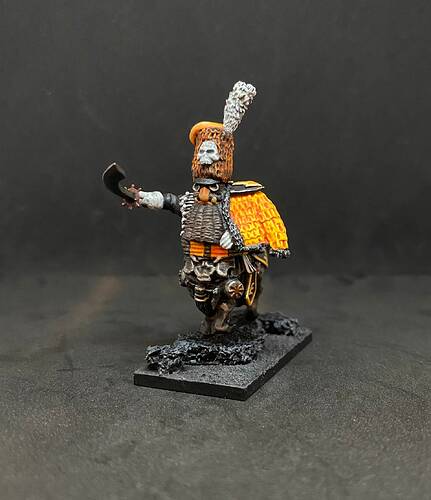 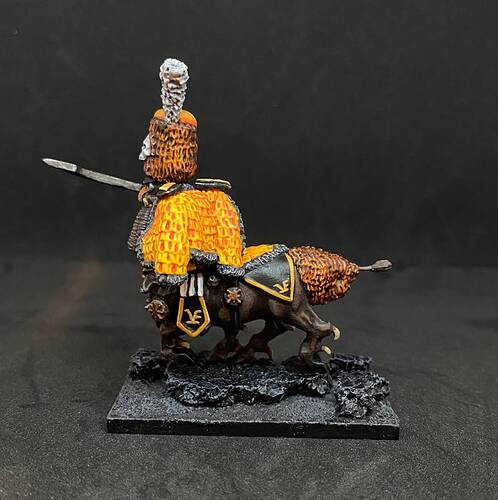 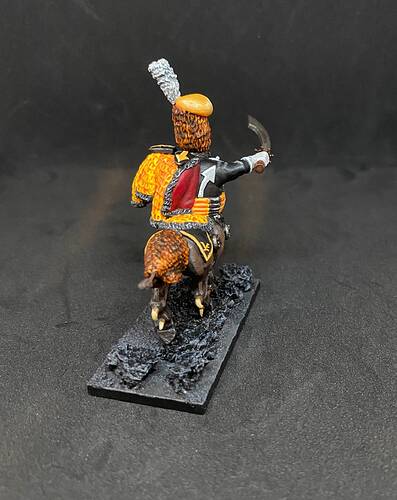 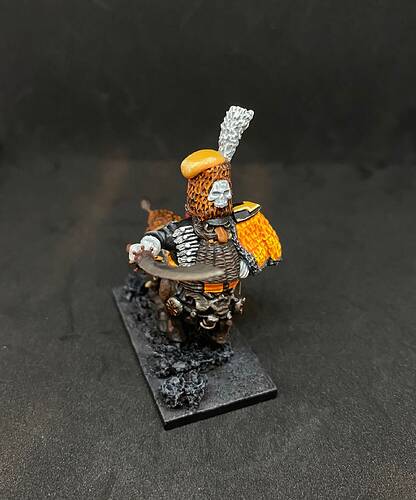 It was great fun to convert and paint this fellow, and I am very happy with how he turned out - I think he is my favourite conversion so far.

I love all of it, from bits used, through the converting process to choice of colours and execution!

Congrats on the bronze hat, man!