Five bull centaur heads done! Some better than others, but overall I’m content with the result. 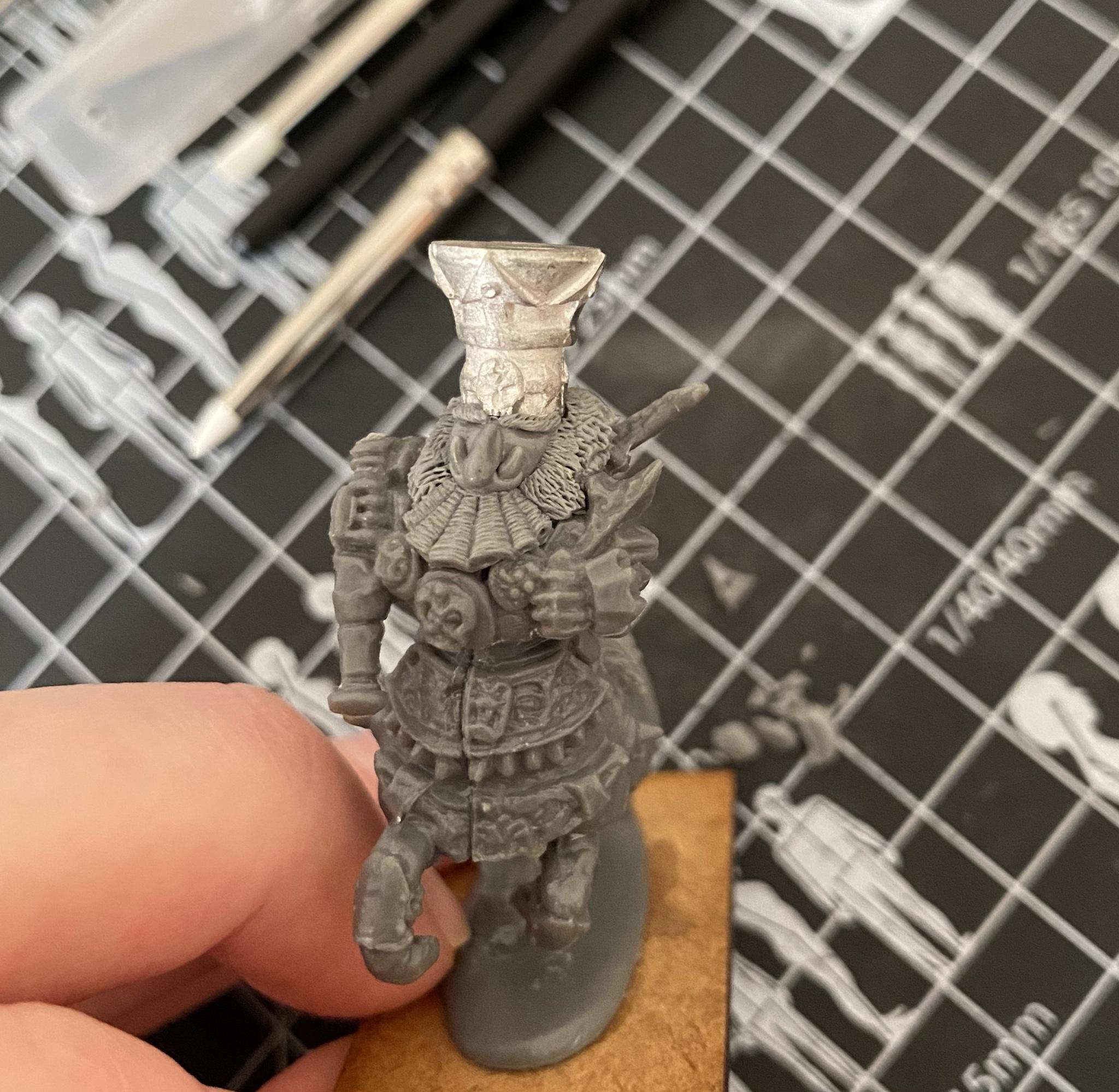 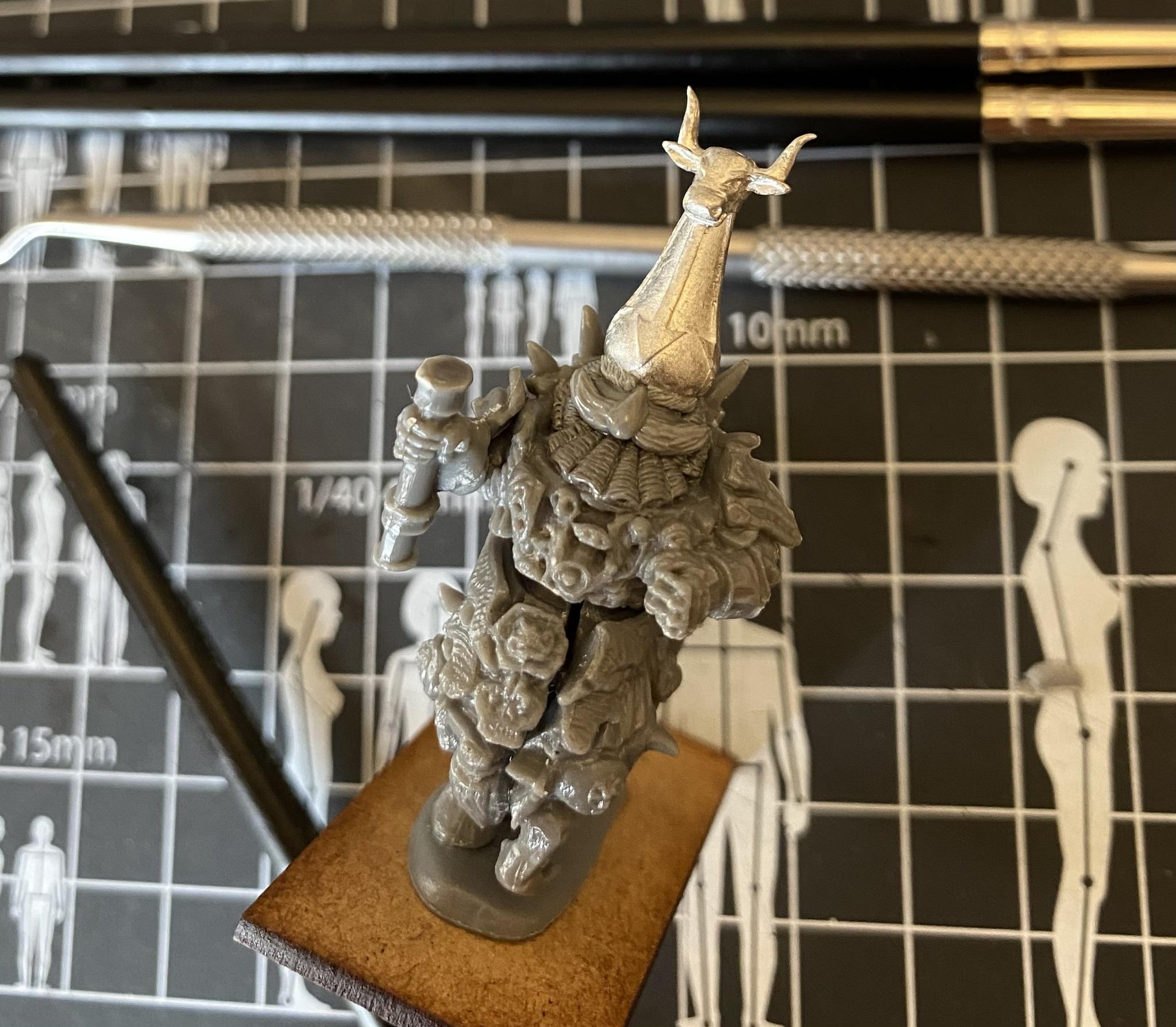 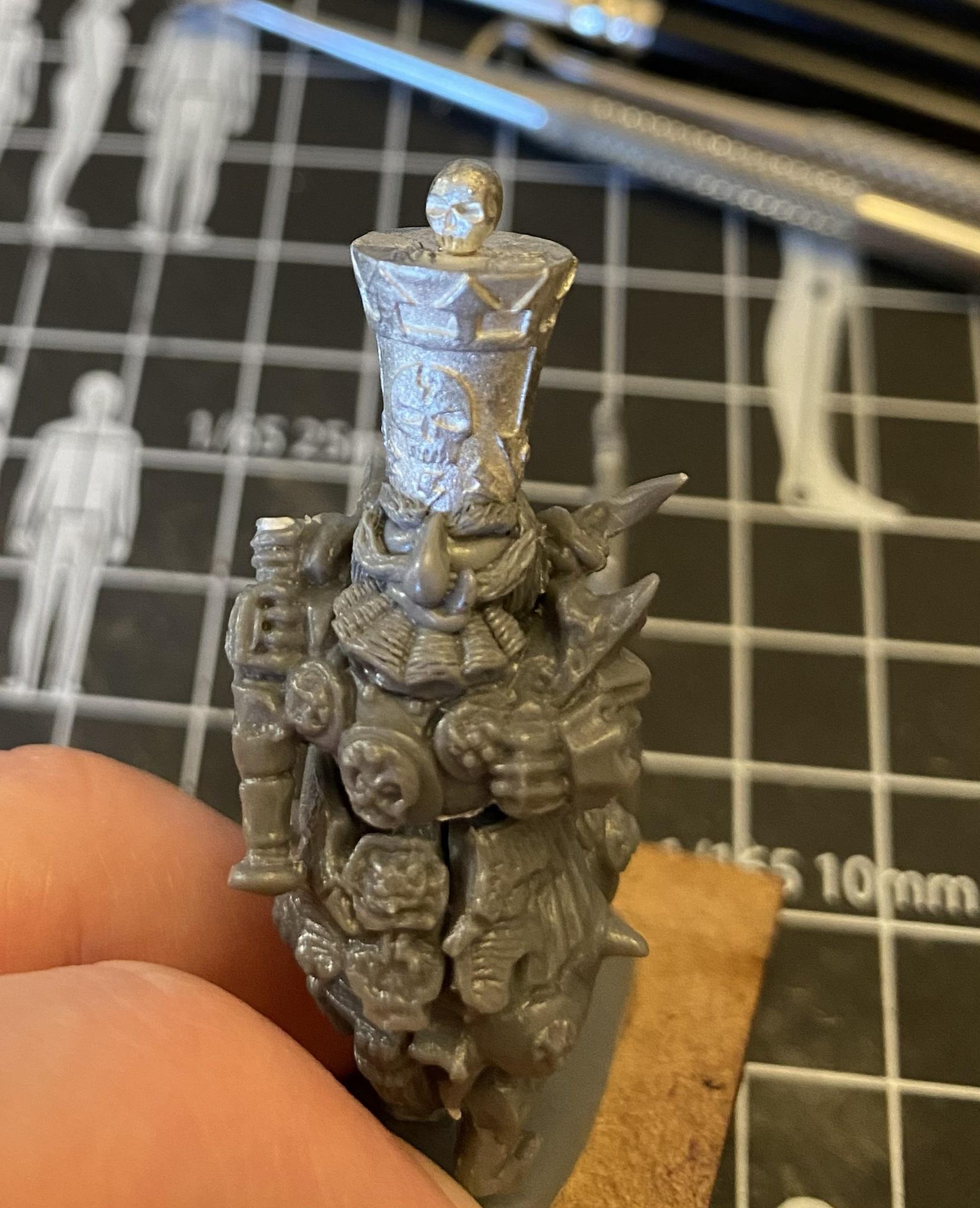 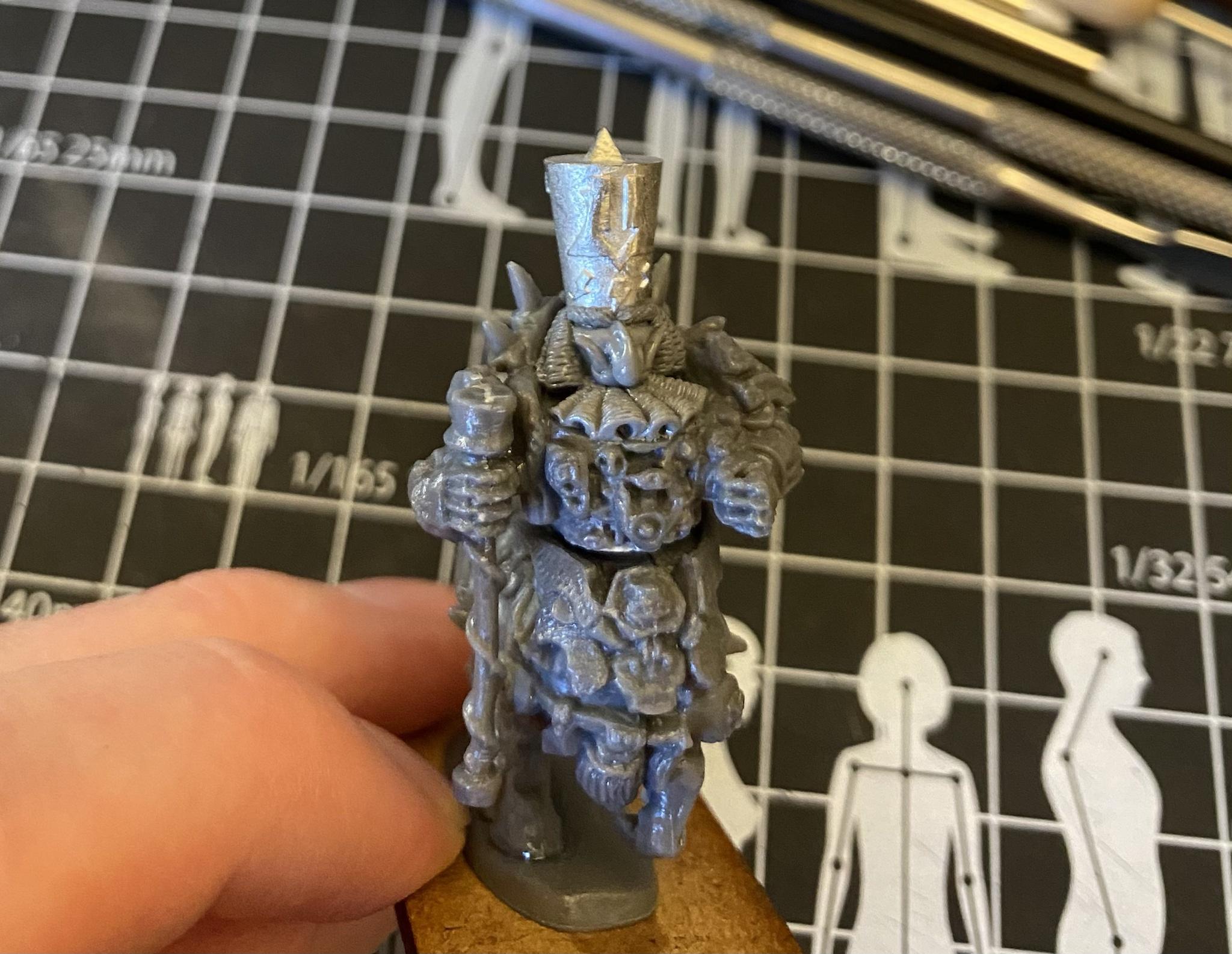 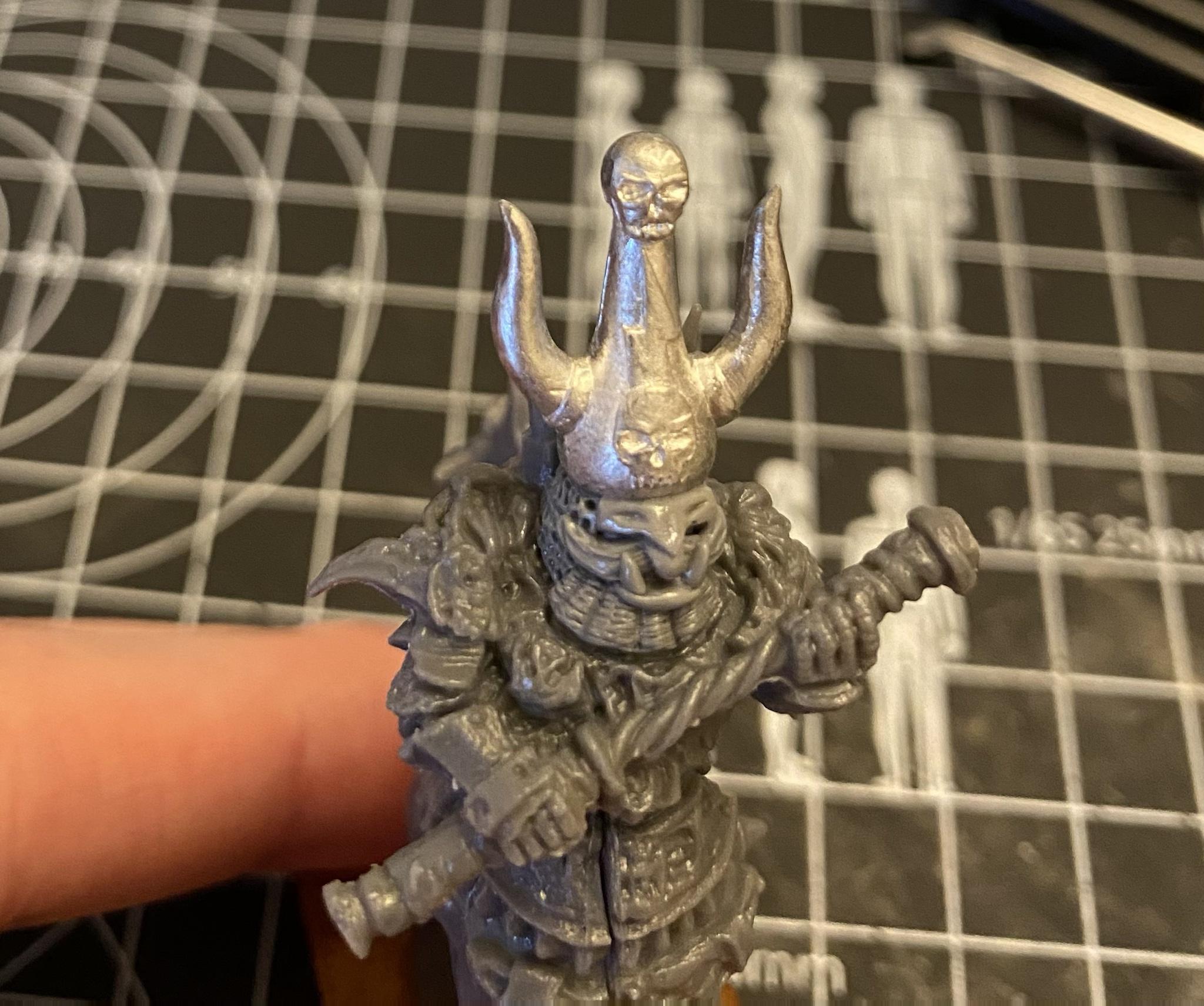 Edit: Just saw that these five heads took me 12 days. Believe it or not, that’s a very good pace for my standards.

They are fantastic! I have to say no. 3 is my favourite. I love his sneer.
12 days seems quite rapid for such quality, by the way.

Look great. I save days painting by doing small tasks in the morning before work like applying a wash , pva glue the base etc. Maybe small sculpting tasks can be split up like that idk. Keep up the good work

I have to say no. 3 is my favourite. I love his sneer.

Thanks a lot, Uther! Might be my favourite too. That face actually has a backstory, which will be posted along with the finished conversion.

Look great. I save days painting by doing small tasks in the morning before work like applying a wash , pva glue the base etc. Maybe small sculpting tasks can be split up like that idk. Keep up the good work

Thank you! I’m indeed always sculpting in baby steps scattered over the course of the day and letting each bit cure before continuing. E.g. sculpt the moustache, wait, sculpt the lips, wait, sculpt the nose, wait, sculpt the tusks. Doing anything in the morning before work, however, is completely out of the question for me. I have a hard time getting up as it is, I’m glad if I manage to get some coffee into my belly before heading off

Really beautiful conversions on the bull centaurs. Looking forward to seeing them painted!

I hereby declare this conversion done! 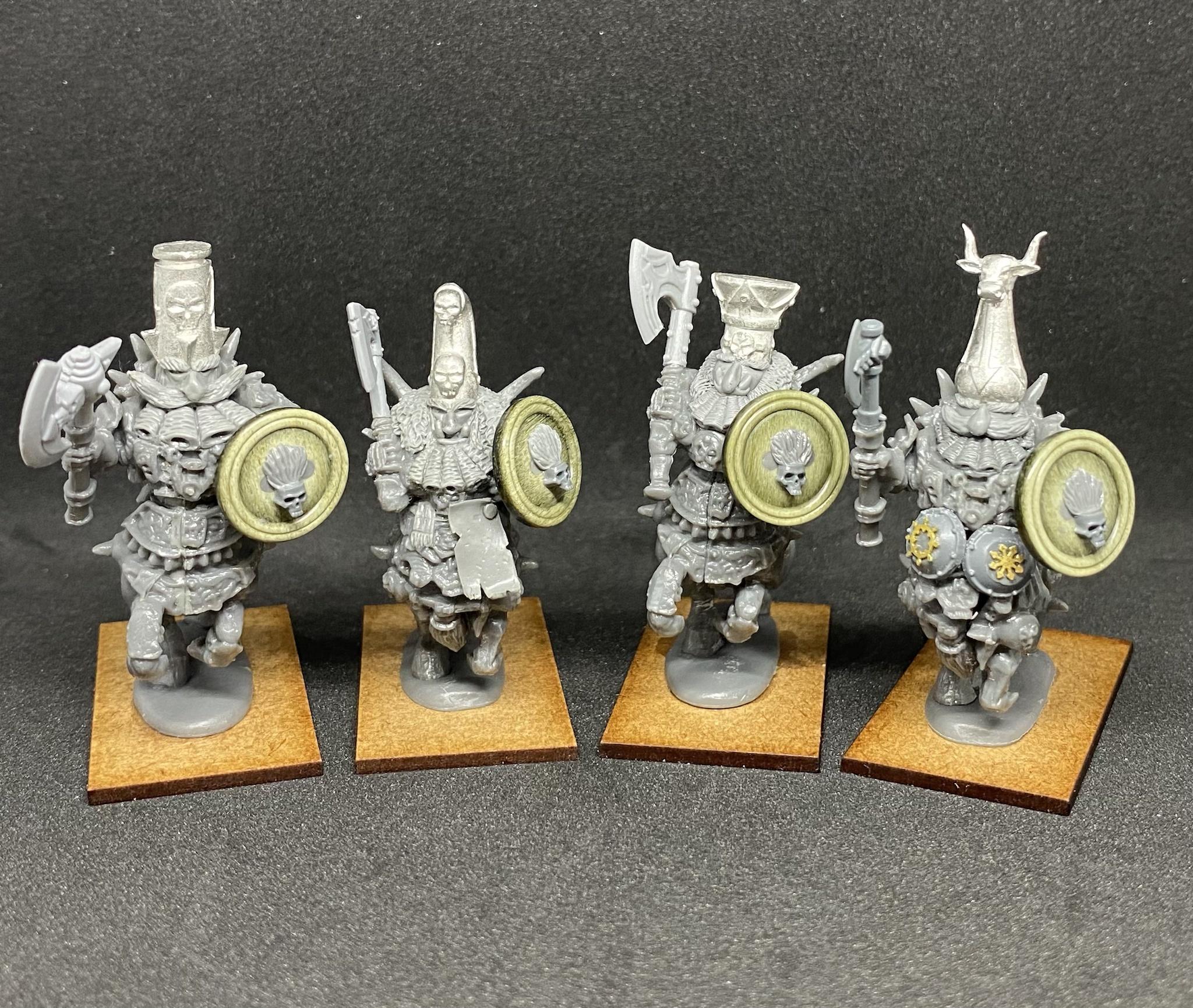 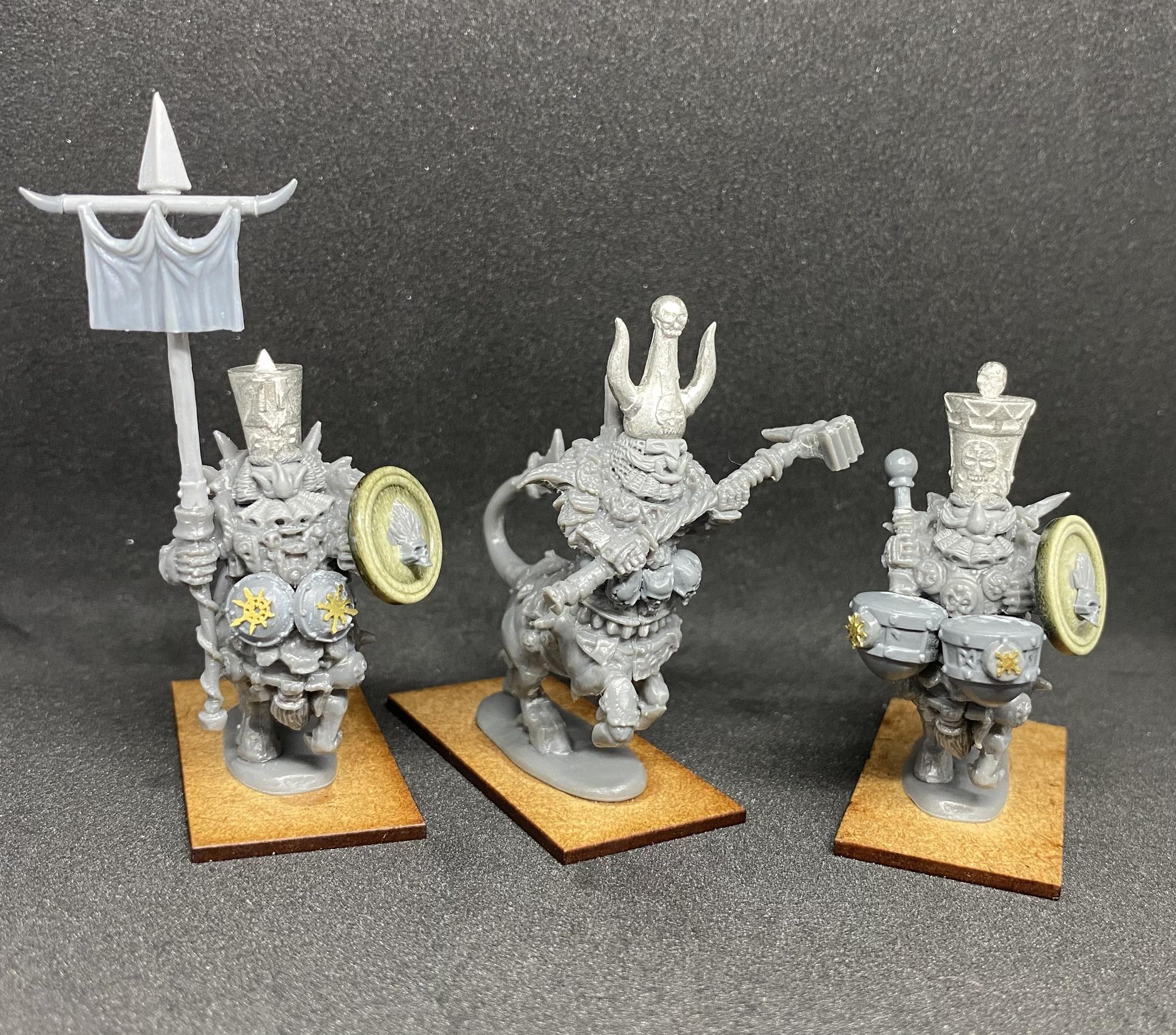 Regarding the musician’s curious face, @Uther.the.unhinged: The poor guy actually used to play the trumpet. However, he had to switch to drums after losing half of his teeth because the unit champion behaved awkwardly with that maul of his in some battle. That is the reason both for the single tusk and the expression of perpetual hatred.

Dwarven Bucklers to cover the transition between dwarf and bull torso are an idea I stole from @Iceman, so thanks for that

I freely admit that I went cheap on the shields: instead of scultping the devices myself, I just cut up some GW skulls and only added flames to create the flaming skull icon, as I’ve already done a number of times. But I think that the hats and faces are doing most of the optical heavy lifting in this conversion, so that should be fine.

The task of getting these things painted seems a bit daunting to me right now, but I will get around to it some day.

Edit: In retrospect, I’m glad that I did only seven of them, because they do not rank up well at all. It will be just about possible to arrange these on a KoW cavalry regiment base, I think.

Poor musician. I guess he suffered for his art.

Antenor they should rank up fine if you offset where you glue them to the bases just slightly or at angles. As you havent built up their bases you could still change 1 or 2. Looking great. Plans for a colour scheme? Or will they all be different?

Great work on the Bull Centaurs! Good sculpting and slick conversions. I like the use of the Chaos stars, and the clever flaming skull shields. Lovely beards with tusks, and great use of @Fuggit_Khan 's hats as well.

Thank you for your kind replies!

@Zoddtheimmortal Good idea with the bases, I might give it a try! But super glue might have the final word on this one… but it makes no matter. I actually like the idea of a little more space between them, so that the conversions can stick out more clearly. Vanity pure and simple.

Regarding the colour scheme, these Bull Centaurs are part of Azrubal’s Host (my KoW army) and will consequently get the usual red, bronze, and black treatment. Nothing fancy - my paintjobs never are. I
try to put most of my hobby time into improving my sculpting skills, so painting gets a bit neglected, I’m afraid. I mostly do it because the final satisfaction with a conversion comes with the completed paintjob and I dislike playing with unpainted minis. In general, I’m happy with a paintjob if it looks good on the gaming table - and I hope that I get to see a gaming table again soon!

So cool and so full of character . Truly great work @Antenor

Greetings, all! Remember this little fellow?

Well, he has been turned into metal, and here he is in colour: 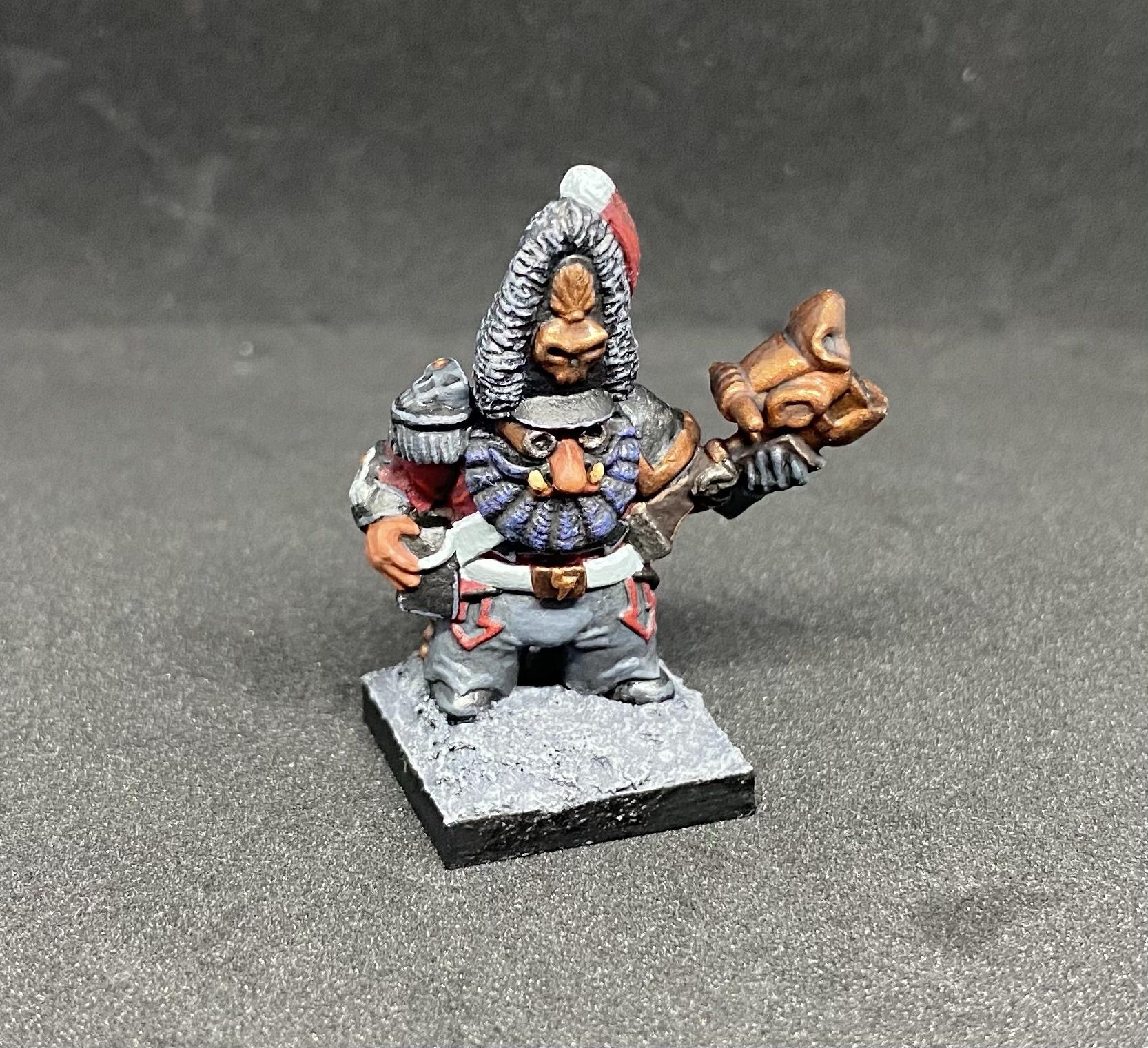 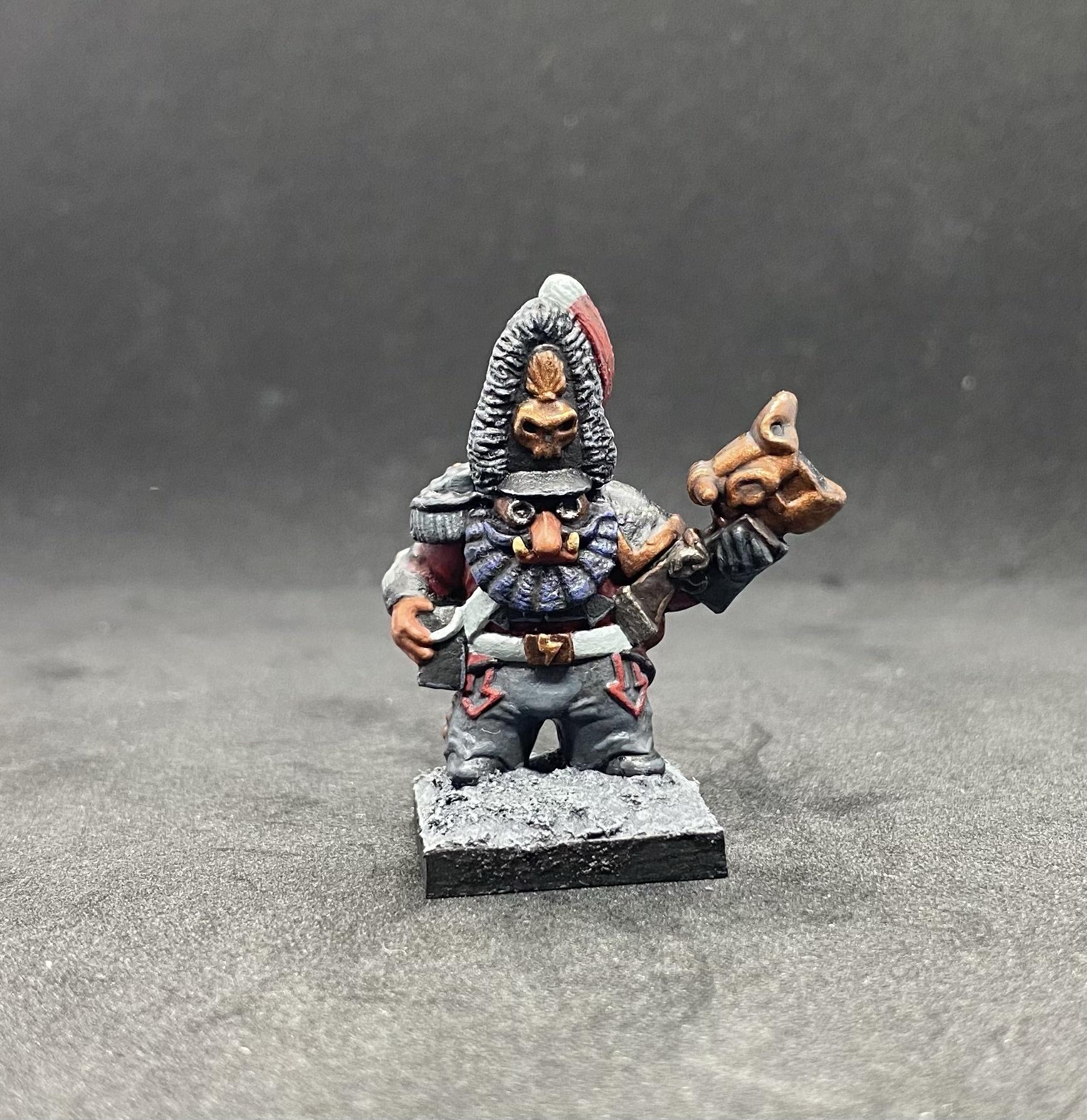 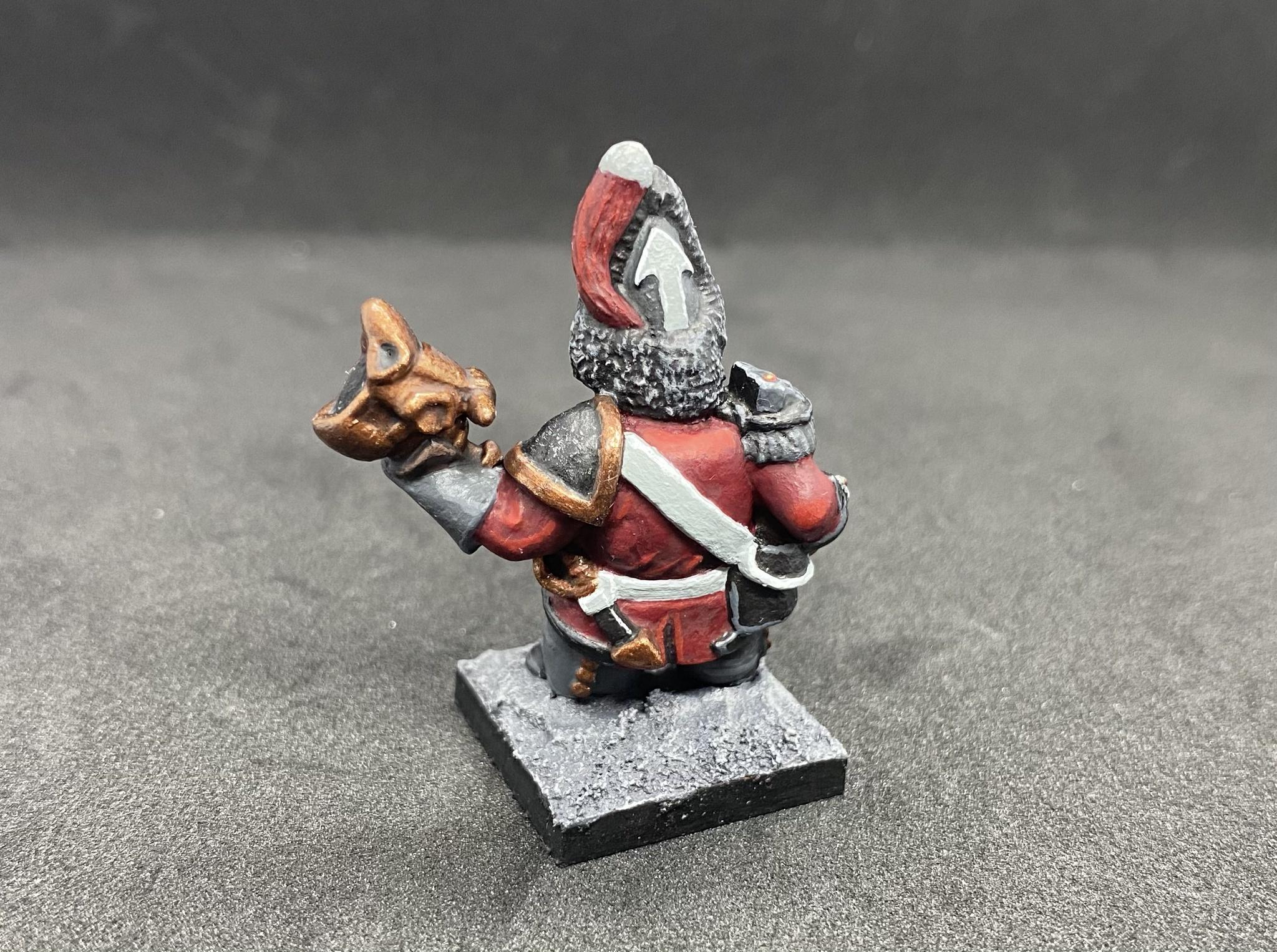 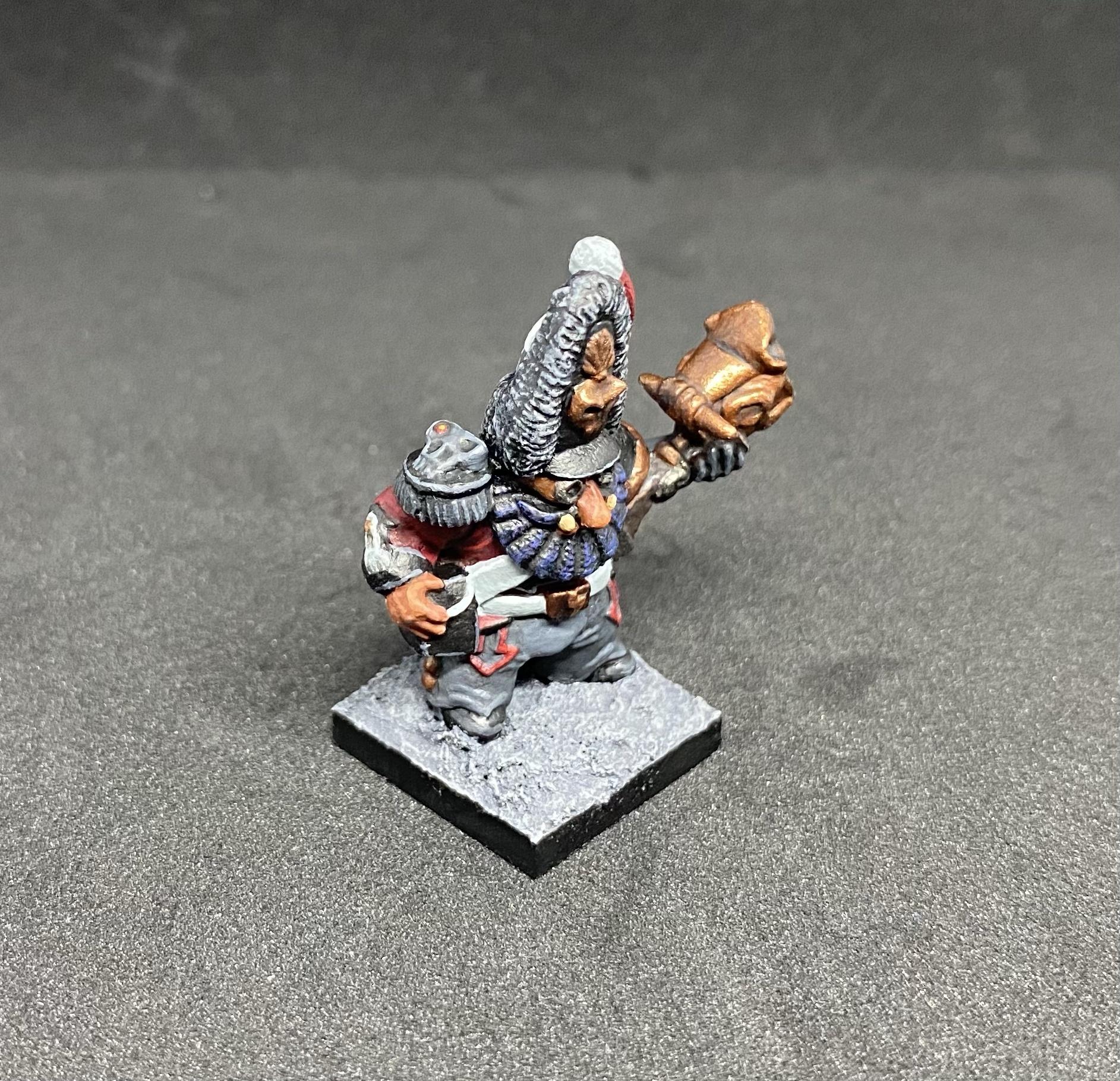 As I already wrote on the Discord, it is funny how painting one’s own sculpt gives one a feeling of completion, although it is not part of the sculpting process itself. I painted this guy in one of my bouts of motivation over the last two days, and only now this project feels completed to me. It is also quite interesting to revisit, in painting, all the parts one has sculpted (and to utter the same curses over the same spots again).

Well done, both sculpted and painted! It’s a treat to see it all come together like this.

Congrats on getting your sculpt casted. He is a cool little dude. Wouldnt be out of place on some sort of steam tank. He has an engineer look about him

Wouldnt be out of place on some sort of steam tank. He has an engineer look about him

That must be the goggles. I think I’ll make three or four more dwarves in this style, and goggles will be the element that’ll tie them all together. In my opinion, they fit the 19th century vibe really well. (That’s right. It’s a stylistic decision entirely. I am not running away from sculpting eyes!

@Fuggit_Khan see above for a face-sculpting tip if eyes would ever pose a problem. You’re well versed with goggles.

So I’ve got a KoW game coming up, and an Infernox is an efficient way to get 140 pts on the table.

In this case he is represented by @Admiral’s beautiful Dwarf Statue sculpt, which I’ve been planning to use as an Infernox for some time now as it fits the army list entry wonderfully (an oversized melee hero with the “Hellforged” keyword).

The Dwarf Statue comes with two options for hands, so that one can build a caster-type with a torch in on hand and an awesome flaming bull spell shooting forth from the other, or a more hands-on kind of guy in the process of teaching manners to a goblin (as in, ripping his arm off). Both of them look great, but being a vile heretic and near unable to paint an unconverted miniature, I decided to save those bits for future builds and try something different. After a bit of rummaging through the bits box, I went for an axe and a multi-purpose claw.

I had the idea of painting him as not quite an animated statue but rather something like an evil fiery spirit trapped in a dwarf-shaped bronze frame, mainly because I wanted him to look and feel completely different from my Obsidian Golems. Since the whole thing consists of nothing but metal and magma, the paintjob basically became an exercise in drybrushing.The result does no justice at all to the sculpt, but I managed to get it done quickly (which is something I need to practice if I ever want to field those 2000 pts), and I think it will look alright on a gaming table. I’m looking forward to watching this guy smash into his enemies’ ranks for the first time, and hopefully many times after! 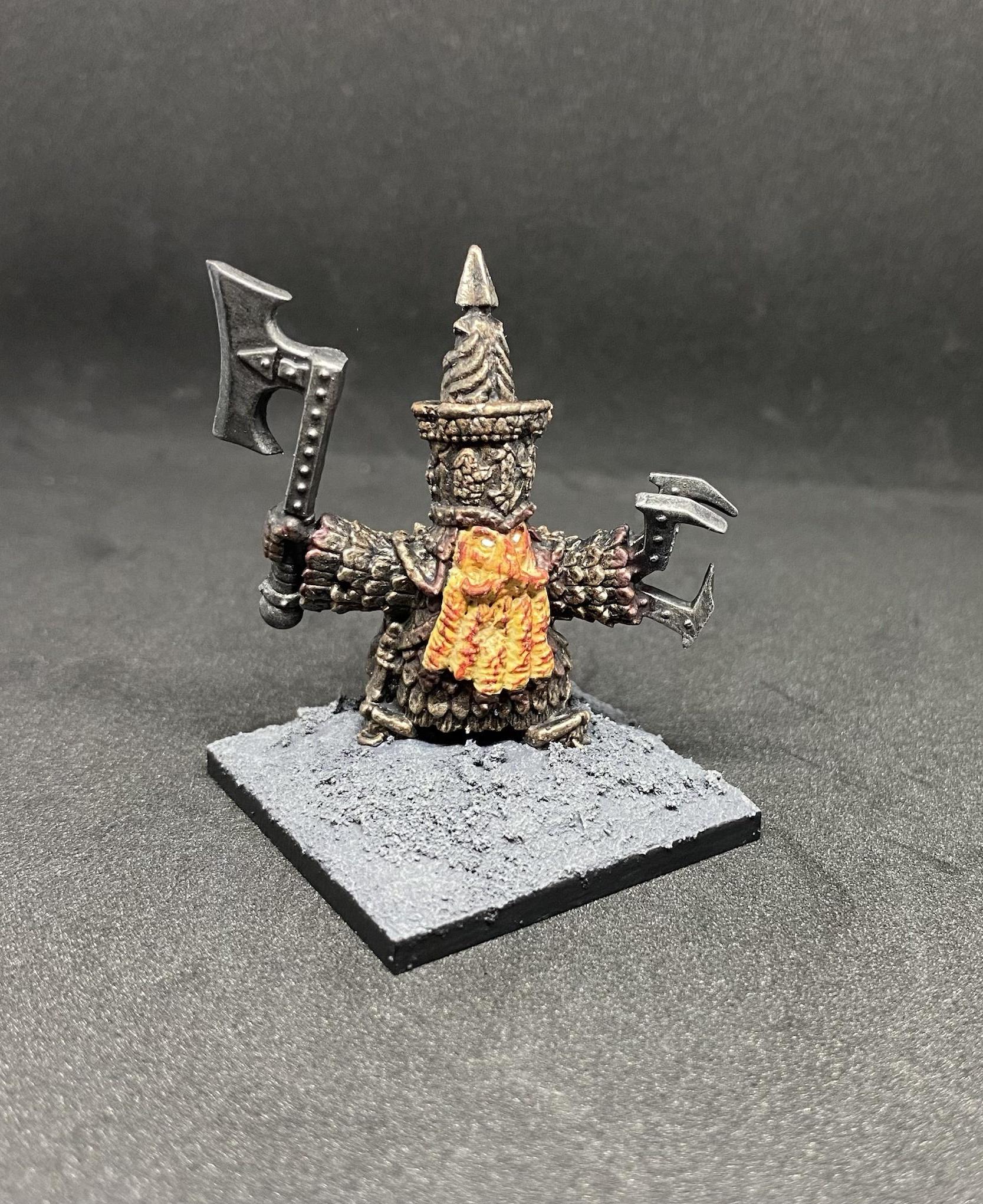 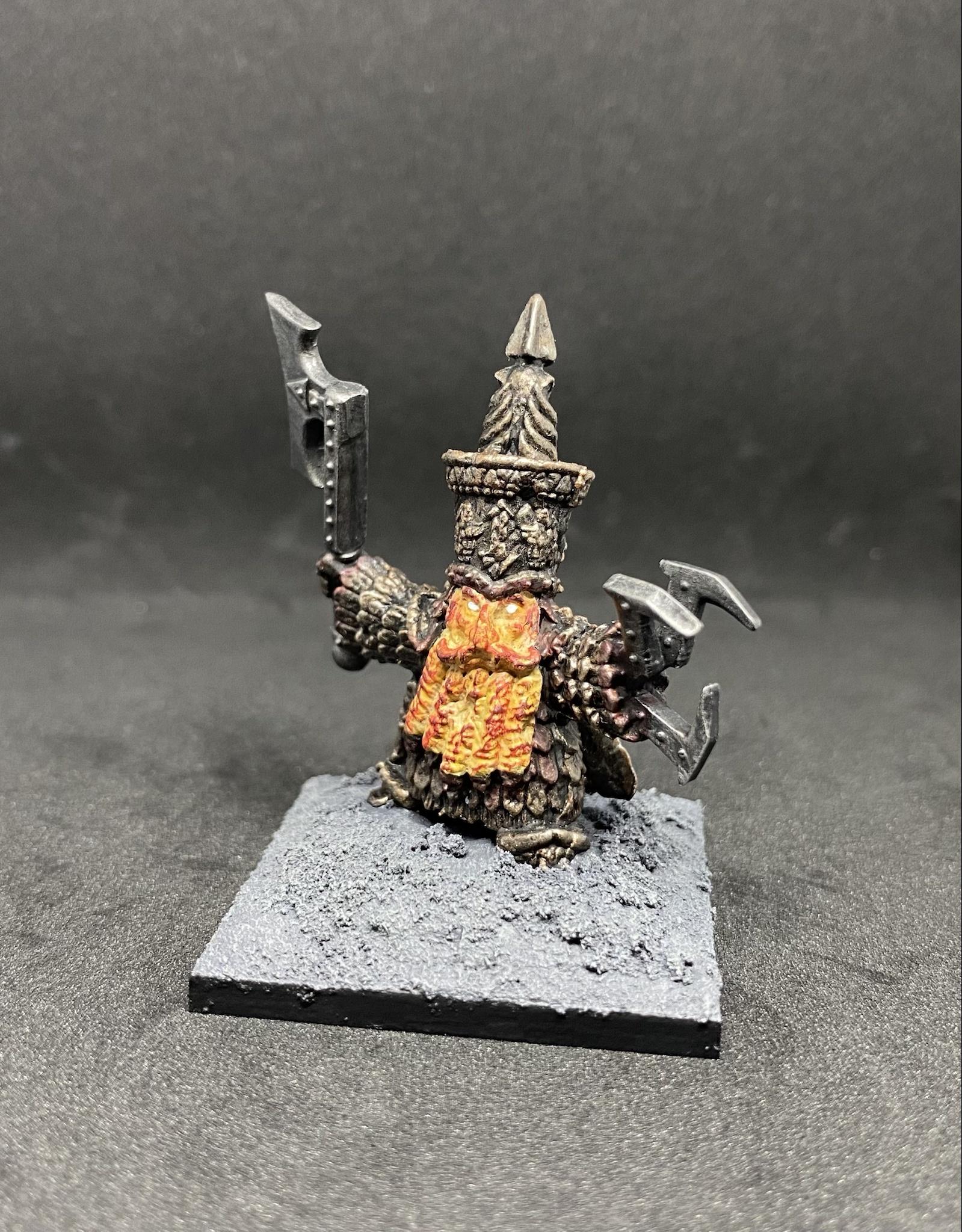 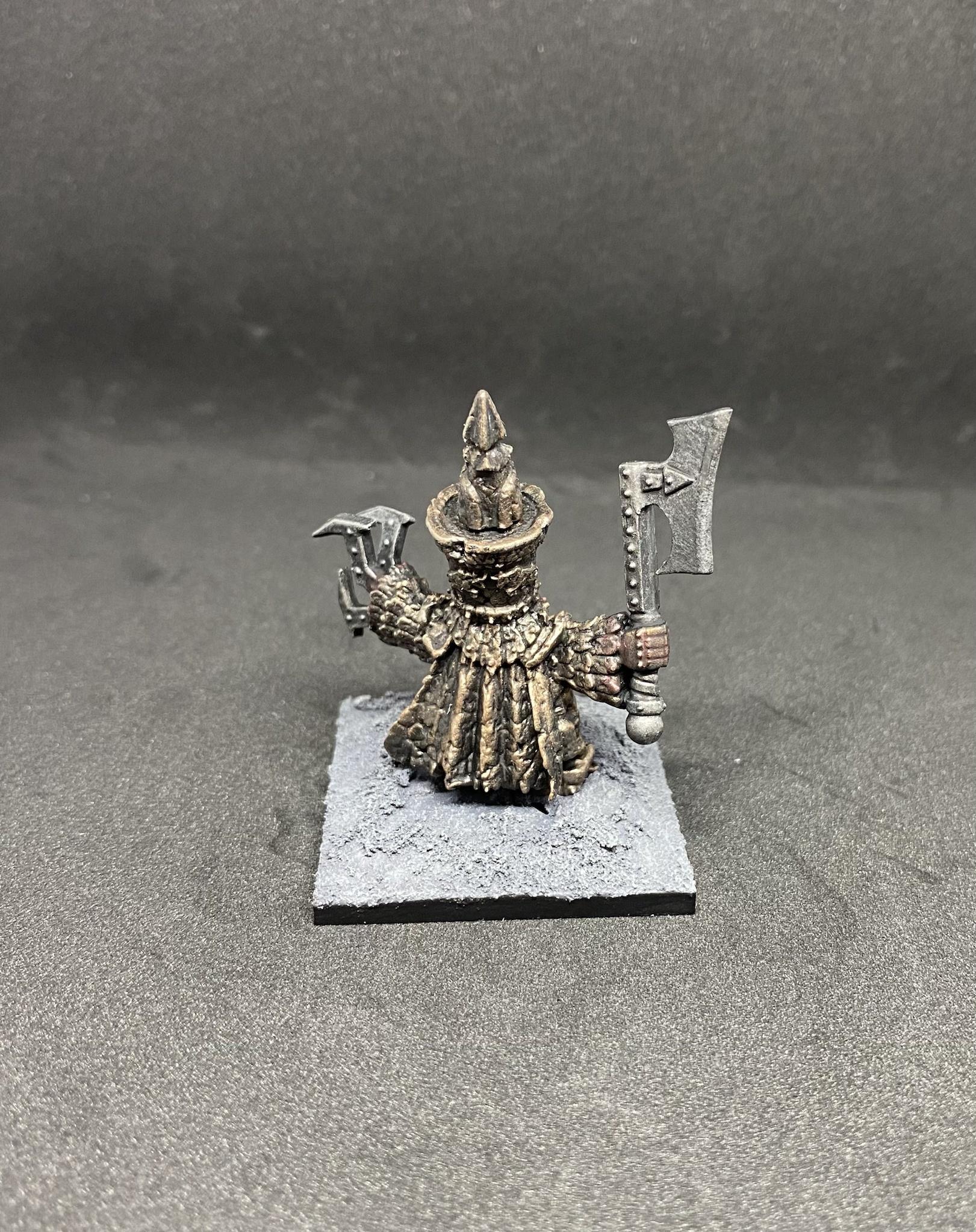 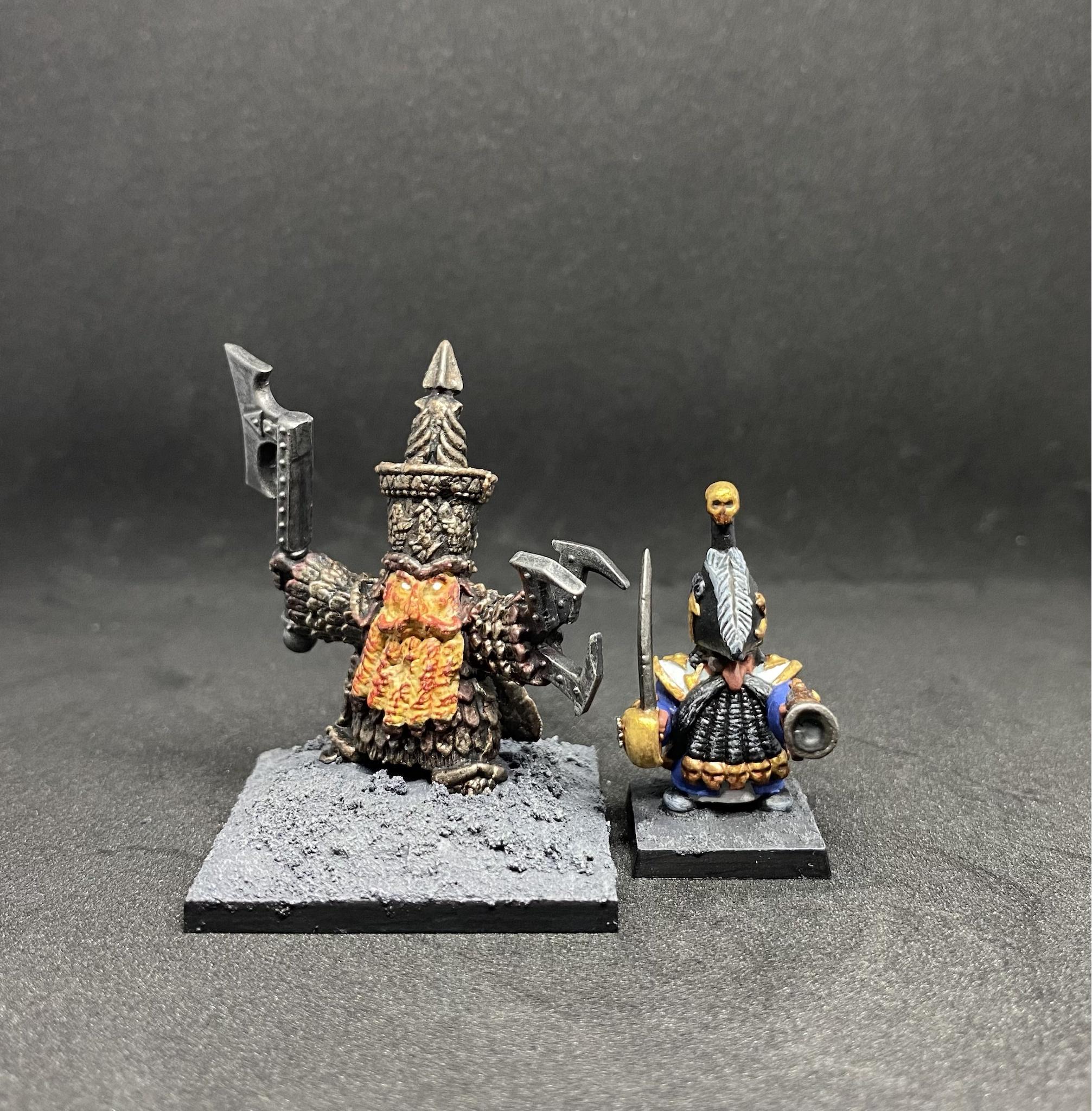 Nice conversion and paintjob! He looks brutal. I am curious to see whatever you convert with the leftover bits in the future.

The amount of detail I cram in on sculpts should make them easy to drybrush, ever a fine technique not to be sneered at. It’s lovely seeing one’s cast sculpts be converted like this.

I finally started working on my next sculpt! It’s the sequel to the Grenadier, so once again there will be a mixture of Napoleonic and Medieval Fantasy aesthetics. I’ve got a little wishlist for this chap (we’ll see how much of this I can manage):

And here is the current state of affairs: 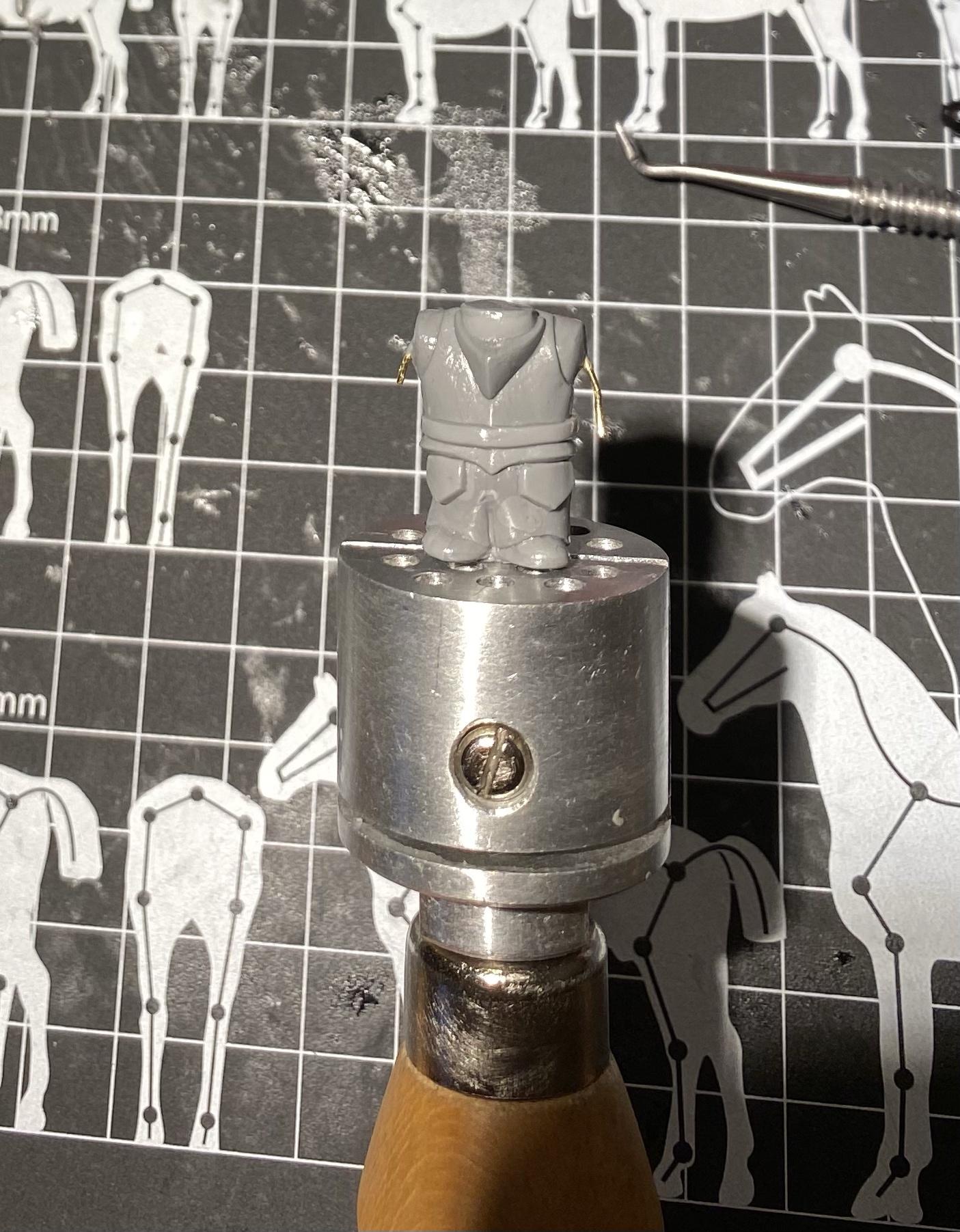 The armour will basically be a Napoleonic half-cuirass plus tassets and a bevor. The bevor will hide the dwarf’s beard (booh, heresy!), but his moustache will hang over it (in a manner similar to that of my ill-fated Mycenaean evil dwarf).

Contrary to intentions, he’ll turn out slightly taller than the Grenadier (though perhaps not quite as corpulent), but at this stage I’m just going to roll with that - it’s a very small difference and will not impede their compatibility.

I’ll keep posting updates and commentaries to document the progress. As always, I’m happy to read your feedback and suggestions!