3D prints, an emissary and progress on the Artisan’s contest dwarf

After vacation, a family visit and an involuntary temperature-induced hobby break, it’s about time for an update.

First of all, an expedition force spearheaded by a particularly vile individual by the name of Yzenor Anvilbrand has arrived on our shores (a while back I might add). I did not manage to document this earlier here, so thank you once again for the lovely miniatures along with the nice & unexpected emissary and letter @MichaelX!

Yzenor is a fairly tall fellow but he will certainly find a new home in my force. I’m fairly impressed by the quality and level of detail of the prints. And no mould lines to scrape off! If there is a single argument for me to get a 3D printer in the future it would be this. I don’t think that Fabelzel’s miniatures mix particularly well with mine, so I am planning a Mordheim spin-off with them. 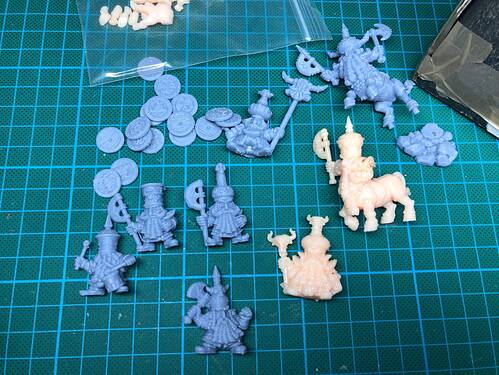 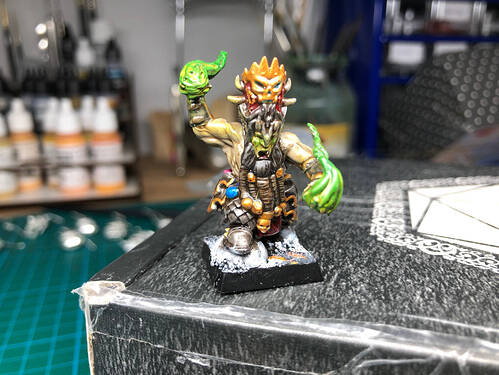 Work on the Artisan’s contest dwarf has continued. I decided to redo the hastily applied lacing on the armour and added arms, shoulder plates and a beard. @Admiral asked me to do a tutorial on how to do the armour which I will do in the future but not on this model as I had to figure out by myself how to do it. The whole project so far was a steep but invaluable learning experience as I was consciously doing multiple sculpting steps at once instead of ‘quick-saving’ all the time. This not only accelerated the whole thing but also made it easier in some places to get the desired results (the helmet tutorial mentioned above truly was a sculpting epiphany for me): doing the lacing together with the panoply armour plates (as on the shoulders) was a lot less frustrating than applying them to the already cured plates. 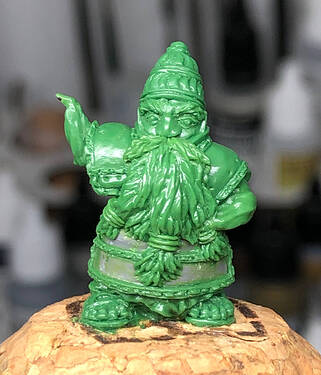 I also got some dollies from Michael, so I might contribute to the Brazen Bastards project in the future. However, after my contest dwarf is done, I want to focus on clearing out my WIP back log and work on a non-CD project I have planned for a long time, so no promises that this is going to happen this year.

I also moulded and did a few test casts of the hobgoblin sculpt but more on that later in a separate post on my casting blog.

Excellent sculpting for the Brazen Bastards! Love it.

Cheers. I did start with the dwarf sculpt before I got the dollies, so I did not bother with scale or customizability. This guy is going to be monopose. If there is an interest in my sculpts, I’m quite open about digitizing them (be it for Brazen Bastards or otherwise) since I don’t want to bother with the logistics of having an external caster and selling them myself. My only condition would be that they shall be available for free similar to Fabelzel’s sculpts.