I am building a chaos dwarfs army. I bought several years ago a second-hand chaos dwarf army. For a campaign in the dark land I decided to paint and increase my army. For the occasion I also begin to build a chaos dwarf fortress. Pictures can be viewed at this adress Sign in – Google accounts.

(it is possible that the access is limited to google account, I am not sure, so If anyone meet any problems, just warn me I will post pictures directly on this thread)

The base is an octagon (it is my chaos dwarf analogy for the chaos symbol with 8 arrows). I am going to sculpt the wall and tower to give the appearence of basalt prisms. I also did some rock piles and cauldrons of melt metal.

Hope enjoy and see you for the next advancement.

I don’t have a google+ account and don’t plan to.

So there are the pictures: 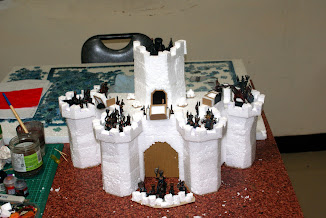 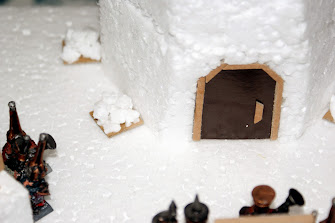 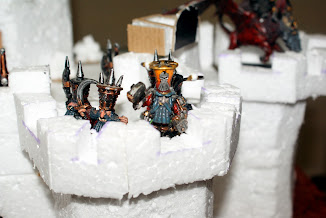 Hope you can see the pictures this time.

Nice indeed on both minis and fortress! You might want to change the crenellations to the ancient Middle Eastern style since Chaos Dwarfs are partially based on Assyrians and Babylonians. It’d help distinguish the fortress from Old World human styles. You could also add Lammasus, Bull Centaurs, lightning and other frescoe decorations to the walls (just paint 'em on), like those on the Ishtar gate.

Other things you might want to do with the castle could include torches, braziers, poles with trophy skulls or even beams from the walls where corpses of slain enemies or slaves hangs in the wind. Raid the bitz box!

Thanks for comments Admiral. They are very pertinent. I will modify the crenellations, I did them too large to fit with ancient Middle Eastern style.

I plan to add bull centaurs and chaos dwarf warriors decorations. Actually I did some molding in order to increase my chaos dwarf force, and I discover that half-mold do perfect decoration for flat surface (walls and bases).

Additionnal details, torches, braziers etc… are very great idea. I had not considered them yet. I keep them in mind.

The link to the chaos dwarf fortress is just amazing. Thanks a lot for sharing. Hope to have new pictures for the week-end.

Great to hear about the half-molded models! That’s such a great idea. I look forward to see more on the castle. I really like the layout.

Nothing like a bit of fortress making! Looks great! Like to see more of the Chaos Dwarfs themselves!

Hi, some new pictures of a trial for the tower of my fortress and also about half-molded models.

For the tower, I sculpted first hexagonal faces in order to imitate some prismatic lava. Then I marked out the midle part of the tower to make flat wall to glue some half-molded models. I also change the shape of the crenellation. I added some pipes to reproduce some pipe exit for pouring molten metal on any ennemies would like to climb the wall !

Unfortunately or not, I used GW black spray for base … and the polyester began to melt !! If I am good enough with the painting I can imitate some corrosion and dammage effects.

The pictures of the tower

I plan to add a hatch and some torches.