"They came from the Deep !"

I have just uploaded the first Nautican Army PDF (draft 4.0) for playtesting and feedback.

There’s an army poll for those who are willing to provide some quick feedback:- http://naut2.blogspot.com

Please let me know what you think. 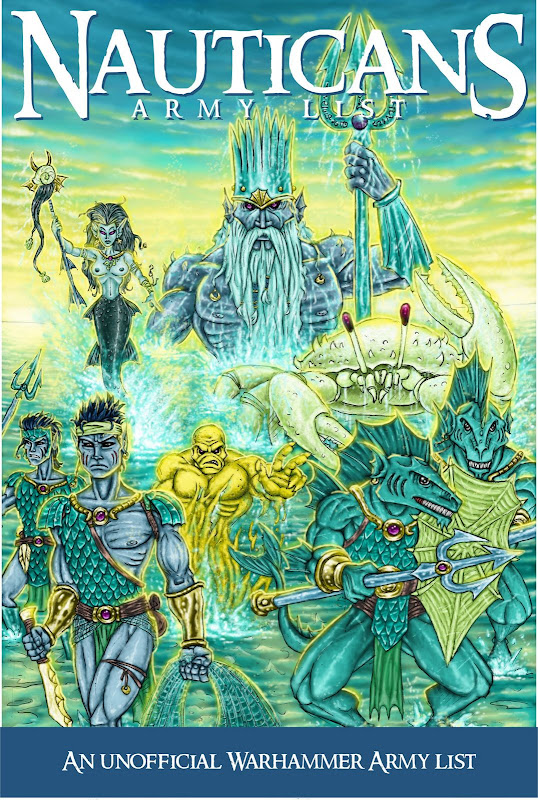 I have not read yet but promises to be interesting

thanks very much Balseraph. Let me know when you’ve had a read.

My first oppinion is that AB isnt balanced the weapons with spear,halberd abilities and armor piercing is plain wrong.

Spells with effect based on casters level is 5 ed idea, and it doesnt exists in warhammer, some spells are too easy to cast for what they do,

and creatures you described dont exist in warhammer world, and dont fit rly

i think it is on the level with Balseraphs compilation…

In what way are the weapons unbalanced ? True, the trident has some unique abilities but other armies contain racial specific weaponry that have unique benefits.

Nothing wrong with injecting some new rulesets providing they don’t conflict with existing rules.

Which spell are too easy to cast ?

How do you know the creatures don’t exist, we’re showing you that they do in fact exist but just haven’t been seen before

Thanks for the comments but you’ll need to elaborate a bit before I can post a more useful reply.

Do not worry about the opinion of Gar.

He sees negatives everywhere. On the Polish forum, he called my work a junk compilation… Although I doubt that he ever read it. He knows Warhammer world only from 6 ed where the fluff has been almost nil.

He abuses and criticizes everything. The best way is to ignore him.

There are too many units, and they each have too many special rules. It really needs to be pared down. The sea storm affects the enemy too much, it can immobilise most of the army. Healing through homeopathy: I know it is a magical world but that is really unlikely…

I’ll have to check this out. Who did the cover?

Balseraph, ok thanks for letting me know.

Yes over-complication seems to be an emerging theme on the forums responding to the army list. I will take it into account in the next draft. The Sea Storm has been significantly reduced in effect. Have another read, it is area effect and has limited impact on the enemy and is costly to employ partly because the Chanty Singer is weak and relatively expensive to select. Homeopathy - ok, you got me. Point taken

Willmark, check out the credit in the Acknowledgement page (behind the cover) for contact details for Gareth Pannan, the cover artist (and most of the content too)

I read only few pages, for now

Some of my sugestions. Use or no

2. Creatures from the Deep have a regeneration save of 5+… IMO it will be ok when you add - when within 6" or 12" to water terrain

3. The fisher speargun - are you thinking on something about like harpoon? If yes, it range imo must be shorter - 8"

4. Summon water elemental spell - this elemental is to strong as on 9 casting power. IMO 10 will be ok.

5. spells 5 and 6 imo should be possible to cast only at some distance from the water terrain - because they are based on the water

6. I think that you could add a special rule to the army- when fight in the dry terrain or the desert… they receive some minus(to movement… or strenght… or …). in the end, it is counterproductive to their natural area.

When I read the rest - I will send you my sugestions- if I find something. But I really like the idea and execution

Thanks very much for the comments folks.

I am collating them all the suggestions and well reasoned arguments from various forums this weekend and I will post back here with the likely changes to the army book. It shouldn’t take too long then to update the website and pdf so hopefully a new draft will soon be swimming it’s way up from the Deep soon

The army book has now been updated to draft 5.0 to take into account of all the feedback and suggestions I’ve had across various forums. Overall, there has been a reduction in the number of special rules, some other simplifications and some restriction on use of certain units. I think the army’s looking somewhat more balanced than before.

Please let me know what you think. Thanks,

(see links in my signature below)