Just spotted this on BoW:

There’s an unconfirmed rumour going round that Alan Merret is leaving GW, although no solid info, so could just be that, a rumour.

Who is Alan Merret? Is he important? Is he the boss?

The current CEO is a complete idiot, the things he has said in press conferences is madness and explains allot of the GW bullshit. He told his stockholders the company primarily sells models just for people to collect and paint (Not for their games! Yeah because the hundreds of barley painted 90$ land-raiders on eBay at any one time where failed art projects), and famously said at a press conference that they don’t need to do any market research or listen to their fan’s complaints because their such a niche company marker research would be a complete waste of money, and that regardless of what their fans say have been saying they still buy GW miniatures so obviously their not doing anything wrong.

Alan Merret is not the man who made the terrible comments i talked about above, he is a the man in charge of “Intellectual Property Development” and also in charge of The Black Library, and big part of the Golden Daemon. Some GW insiders say he actively disliked the fan base, was the reason problems occurred in the lore, and micro-managed the creative team into bad decisions and was generally contemptuous of them. He has also been attributed for being responsible for the atrocious lore rape that was The End Times, and for Age of Sigmar (but this is not confirmed).

He actively blocked projects which where popular with the fan-base, but which he didn’t like, for example bringing back Gene-stealer cults (which recently happened, supposedly against his wishes, and is sited by GW employees as a sign of him losing favor). He is simultaneously sited by GW employees as being both a guardian of the IP, and for runining it �?" so its difficult to say if him leaving is a good or bad thing, people are saying conflciting things about him. The only consistent thing im hearing form reliable sources is that the people that worked under him (the creative team) did not like him. Assuming he actually is leaving, this is a rumor.

Awww... man I really hoped Alan Merret was the CEO (he is not)

The current CEO is a complete idiot, the things he has said in press conferences is madness and explains allot of the GW bullshit. He told his stockholders the company primarily sells models just for people to collect and paint (Not for their games! Yeah because the hundreds of barley painted 90$ land-raiders on eBay at any one time where failed art projects), and famously said at a press conference that they don't need to do any market research or listen to their fan's complaints because their such a niche company marker research would be a complete waste of money, and that regardless of what their fans say have been saying they still buy GW miniatures so obviously their not doing anything wrong.

I thought that these things came from the previous CEO (GW has a new one since a couple of years)???

I actually like A LOT of the things that GW has been doing in recent times. On the top of my mind: re-enter social medias, listen to disgruntled fans and bring back a point system, restore White Dwarf as a monthly magazine, reduce prices for starter sets, introduce more and more softback books...
system 12 August 2016 04:15 #6

After doing a little research your right Skink, the old CEO Mr. Kirby has been gone since 2015! The new guy (Kevin Rountree) seems to making an effort (although I remain suspicious). I’ve been so busy hating GW that I didn�?Tt even realize that they made any changes! And you know I had noticed the starter sets looked allot better.

Who knows maybe this is a signal that the company will start turning things around.

Try to join their facebook AoS or WH40K group on facebook! They have operators that answer most questions posed in the comments. From time to time they also psot pics of users’ armies. Really, really, like it

Things are a bit more complicated. Here a rough summary:

Kirby, a tax accountant, has been the idiot in charge for maybe 2 decades. A.o. he bought out the original founders, initiated GW becoming a public company, profiting most from that decision as a major stock holder.

For years he was chairman AND CEO (illegal in many countries, frowned upon in UK), until he bowed to pressure and let Mark Wells become CEO in 2007. Wells focus was on efficiency, lean structure (one man stores, dropping specialist games and bits service) and high profit marges. He left surprisingly January 2013, probably due to a conflict with Kirby’s autocratic regime. Kirby once again acted as chairman AND CEO until January 2015, when Rountree became CEO.

Rountree has been accountant for GW since 1998, rising to Chief Operating Officer before becoming CEO. He ended the crazy reign of Kirby and is now transforming GW to a rationally led company again, removing one of Kirby’s bad decisions at a time. He still has to deal with both major game systems being in an awkward shape. AoS was emergency fixed recently with a point system, 40k will probably get a new rules set next year, with new Codex production almost stopped for a year. Formally, Kirby is still nonexecutive chairman, but he is not the person in charge anymore.

Alan Merret is a buddy of Kirby and has been part of his autocratic and irrational regime. Being a long time employee, he has filled several positions in the company. For several years, he has been responsible for the intellectual property. He seems to have been a driving force behind the infamous Chapterhouse lawsuit, believing that GW owned the IP on Roman numbers and the concept of grenade launchers and hellebards. Under oath, he claimed that GW’s products are inspired by nothing and that the hobby consists of buying GW products. He also seems to have been the dricing force behind the weird naming strategy after the lawsuit (Astra Militarum instead of Imperial Guard, only English names in all languages), the scrapping of Bretonnia and Tomb Kings and Warhammer Fantasy alltogether, following his layman’s view that this will make GW products more copyrightable (which of course is complete nonsense). Rumour has it that his opinions and attitudes were hated among employees esp. in the design studio.

Thanks for the deeper insight here.

This defiantly sounds like someone who needed to be removed for GW to clean house and win back people who have been alienated by the companies practices. Who knows perhaps his removal is a step towards restoring some of the familiar names, and other bigger even more important things that people loved.

Thanks for the roundup Firehammer.

It’s a great day that Alan Merrett is gone. I should point out he was also the key decision maker for Warhammer Forge dying a very quick death and the guy who put an immediate stop on proper Chaos Dwarf releases (until the recent Shartor and ltd ed models).

It will be interesting to see how GW’s change in direction will pan out over the next year. The new Warhammer Quest was a bit underwhelming, but a few more games like that would be nice.

The new Warhammer Quest was a bit underwhelming

Yah I’ll be honest I thought the minatures in silver tower where awesome looking. Been meaning to pick up a few on eBay from bits sellers.

The new Warhammer Quest was a bit underwhelming

Really? I don't own this game nor the older version, but I read nothing but positive reviews online.

For years, veterans demanded a new release of Warhammer Quest, being the perfect (stand-alone) introductory product for the Warhammer universe. My box of Warhammer Quest has been the foundation of our RPG group for years, providing nice generic heroes, foes and modular boards.

The new Warhammer Quest is perfect ... for the fraction of Fantasy Chaos players who are into Tzeentch and not repelled by the AoS aestetics. Monsters are Tzeentch only, boards are Tzeentch only. And you get several Fantasy Space Marines and Dark Eldar as heroes. So not generic at all, very special interest.

What are the chances that a general public will find the following interpretation of male and female elves attractive: 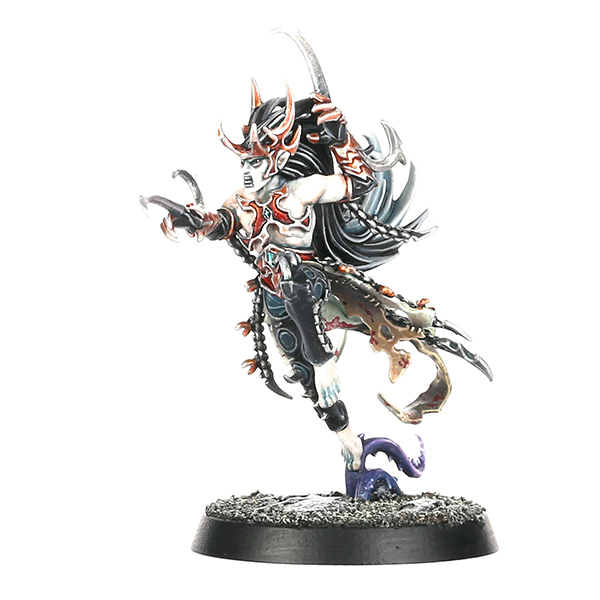 Actually, now that you mention it, those guys would be perfect in Warhammer 40k as an Harlequin Shadowseer & Dark Eldar Wych hero

I said underwhelming, not bad. Firstly, it’s the rules are pretty different from the original WQ. Secondly, the Tzeetchiness is a bit weird, not quite a dungeon crawler as much as going through spangly technicolour corridors. For what should have been a proper entry-level dungeon crawl with a GW edge, we got an LSD trip at an outrageous price. If GW could just hold back a bit on the miniatures and drop the price accordingly, they would attract so many more people into the hobby.

A few people have pointed the finger at Merret for the canning of Warhammer and introduction of AoS. If such things are true (plus all the many other terrible bad things I have read about him) then good riddance.

Maybe there is hope for GW yet

First I am coonfused, which one is a female elf? The second one I assume?

Lastly, “Hope”, implies that the idea of something better might come alone in time. GW has had time a lot of time, more than 20 years to be factual. In this time they made fantasy worse and worse.

There is no hope for GW, let them sell models and die as a business. Nature tends to weed out the weak, lets hope nature has a similar effect on a buiness.

As a Dark Eldar collector literally wanting these models to make dark eldar conversions (planning a female Archon) and a Tzeenchian cultist I have to say Firehammer’s point really hits home for me.

When I look at that model I don’t think Dark Elves.

When I look at that model I don't think Dark Elves.

But that's the whole point. These are not Dark Elves. These are Aelfs whose battletome hasn't been published yet! They were not designed to be Dark Elves!
next page →