A Warhammer scale model of Zharr Naggrund would be the ultimate battle location and scenery piece for any of us, and the very thought conjures up mirky visions of awesomness so truly great … that I can’t quite picture it

I know this idea has been bandied about in the past, and it’s fun to think about, but I’m wondering how to practically go about building Zharr Naggrund?  No, not the entire city, that would be crazy. Maybe a district or portion of the great city… or, I suppose, it could even represent a significant outpost or fortress.  I’m not thinking some crappy little Games Workshop Watchtower either, something tabletop size! 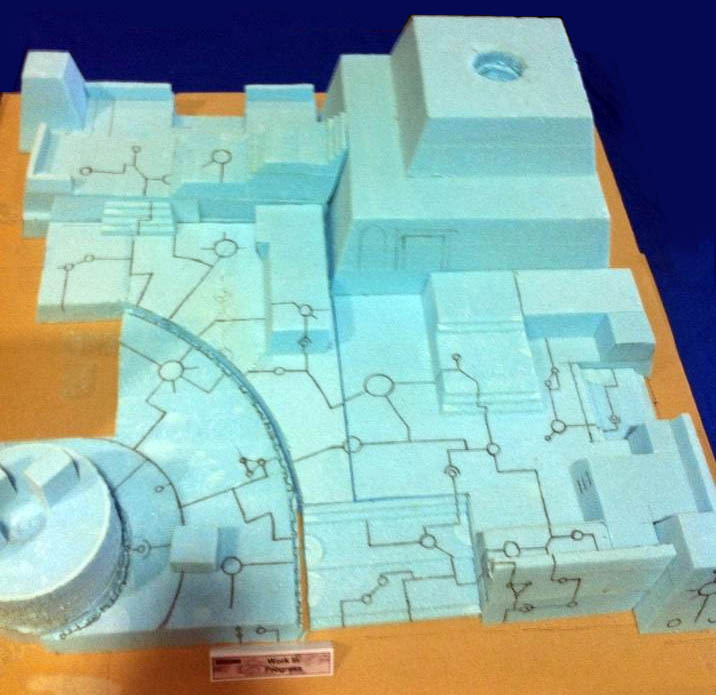 It seems this wouldn’t be so crazy or daunting a task if one was to tackle this is smallish bite-size stages, say an array of 40x40 cm (~16"x16") board sections.  Might make it hard for Warhammer unless there were lots of wide open areas, but for Mordheim or other scenarios this would be the ticket.

My thinking for this is A) each section would have common pathway entrance/exit spots, such that when you line up several sections all the paths are the same width at the border and all meet up at the same places, B) within an individual board section the variation in height along each side would be selected from no elevation, 2" rise or 4" rise, so that from one side of the same section to another site the surface could be flat, sloped or stepped, and C) additional 40x40 cm ‘blanks’ would be needed so that there could be raised areas where the steps from the elevated edge of one section can lead to the ‘ground’ level of the next (which could itself be the start of another staircase or sloped alley or something).

So here’s the basic layout idea, viewed from top-down and then edge-on, with the blank risers shown in a darker colour.

So those riser sections could also be modified for underground passages, mining areas, forges, etc etc.

I have no problem with the level of crafting/hobby skills needed to be able to start building these sections, and they’re a manageable enough size that I could create a simple one in a day and maybe more complex ones over a week, and could easily have something to start assembling very quickly… but what should be on these sections?? In my mind each section would/could be a stand alone piece, with the possibility that several could be put together to represent a larger building like a temple or something, but again… what should be on these??

I’d really like to get some thoughts and ideas from the community in regards to what might we expect to see in Zharr Naggrund? I’m not necessarily thinking of making dioramas with characters and models, just buildings and the like.  Here’s my initial ideas for sections:

Shipyard (i.e. leading to the Falls of Doom)

Forges (large and lots of small ones).

Slave Housings (maybe these are just circular openings in the ground with grates over top?)

walls and buildings under construction

It also occurs to me, in the case of forges, for example, that one could sit down and create several small forge buildings in one sitting and then sprinkle them around several tiles, as the assembly line approach would speed up the build time.

And, am I going crazy? I could have sworn I started a thread about this a year ago or so but I can’t find it. Maybe I just started the thread of thinking with my imagination.

I cannot imagine it in warhammer scale without my head hurting. I think just a ziggurat would take up the entire table.

Some buildings would fit on your sections, but others, say an arena or barracks would need 2 or four to be effective. Would all the edges have to be “dressed stone” to create the effect of the city?

Would all the edges have to be "dressed stone" to create the effect of the city?

I think so... And yes, it would be big to do a main temple of the primary barracks, but main streets and other buildings would work.
Nicodemus 28 October 2013 04:30 #4

So some updates to my thoughts for this…

Use 0.040" thick polystyrene sheets as the base for the ground, with insulation foam underneath if additional height is required, this way the “ground level” sections can be placed flat on the table top for gaming without the need for additional stairs or ramps to access the tiles. I’m also debating whether to go smaller than 40x40cm/16"x16", as that’s still pretty big. Maybe 12"x12"? Smaller means easier to complete, but it means making more sections and scaling down the size of things that can be built on any one board.

Anyway, here’s some further ideas for board sections/areas:

tall walls with faces, CD symbols and bull heads carved into them

Pumphouse for water from beneath the ground

elevator (straight up and down several levels)

Darkforge building in a volcano-like building with a lava moat and lava coming from pipes in the building, etc.

You seem to have it all thought through. Very interesting ideas. Will the terrain feature a visible Daemonsmith place, such as a small plaza with obsidian obelisks, unholy runes and braziers surrounding an open warp rift? If given some equipment, tools, a workbench, a cage and perhaps a piece of Daemon-vessel-to-be (such as a Hellcannon or K’daai armour suit) or similar stuff it would probably convey the message.

What colour should Zhar Naggrund be?

I’m bringing up this old thread, since I’ll start making terrain in a very near future. And I plan on making all the terrain evil, twisted, dead, ashy and nasty.

This night I found some really cool shaped polystyrene plates in a dumbster. I thought “this could be some evil looking walls” - so that’s what they’re gonna be.

I thinkof Zhar Naggrund as black. Black stone with black soot and black ash. … but that’s not very nice to paint.

So I was thinking about going very very dark gray instead. That’ll leave a bit of contrast for soot, ash and oil stains.

But what do you guys think? The colour of Zhar Naggrunds stone?

And if black - anyone have a good method of doing that? Black easily gets boring.

I think marbles or granites as a rule though a proper marble would be hard to paint. I particulary like Snowflake obsidian but that for me painting it would be impossible

Found some great pictures looking at those stone types - but it’ll be a daunting paintjob. Need to find a technique for painting large areas quick and effectively. Perhaps it possible to find some kind of marble spray paint. I’ll have to look into that.