Below are the 10 Entries received. In the spirit of non-biased voting, each of them is given a number. Pick which one you like the best, and cast your vote. All votes will be made public, and thus we shall know if people are creating accounts to vote for themselves, etc. It would also be appreciated if you tell us why you voted the way you did.

We have some very high quality entries this time around! Well done to everyone. Casting a vote will be hard for me! 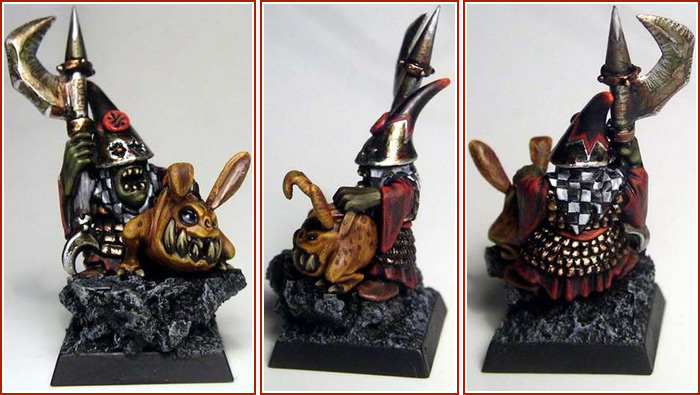 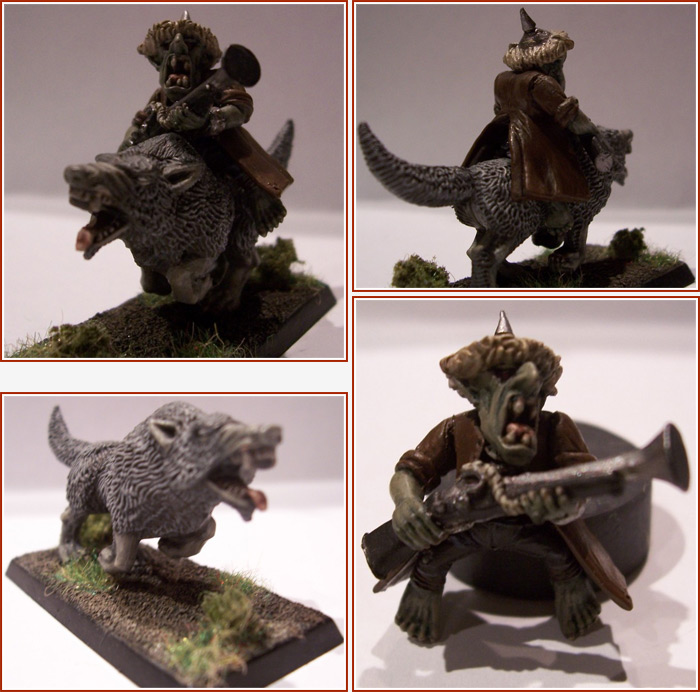 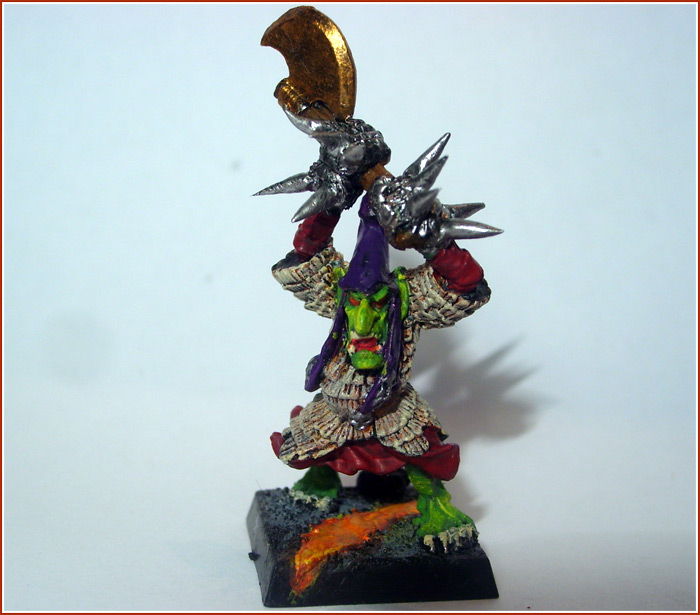 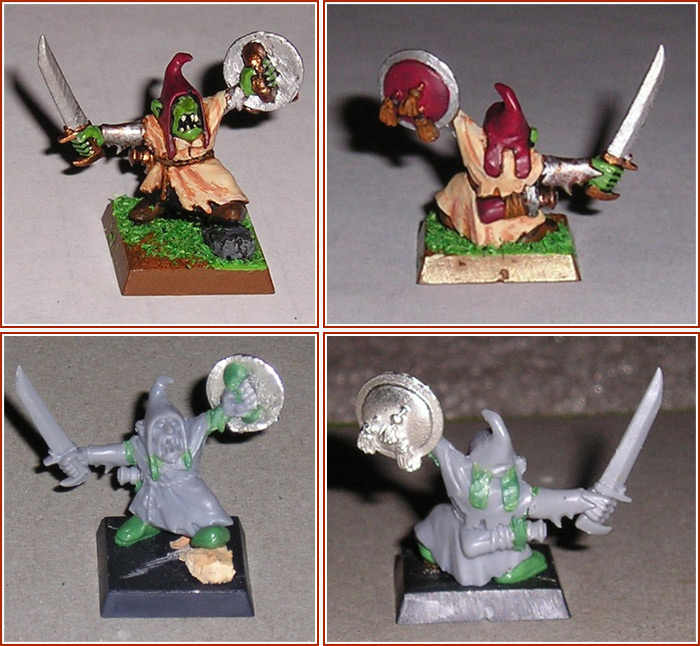 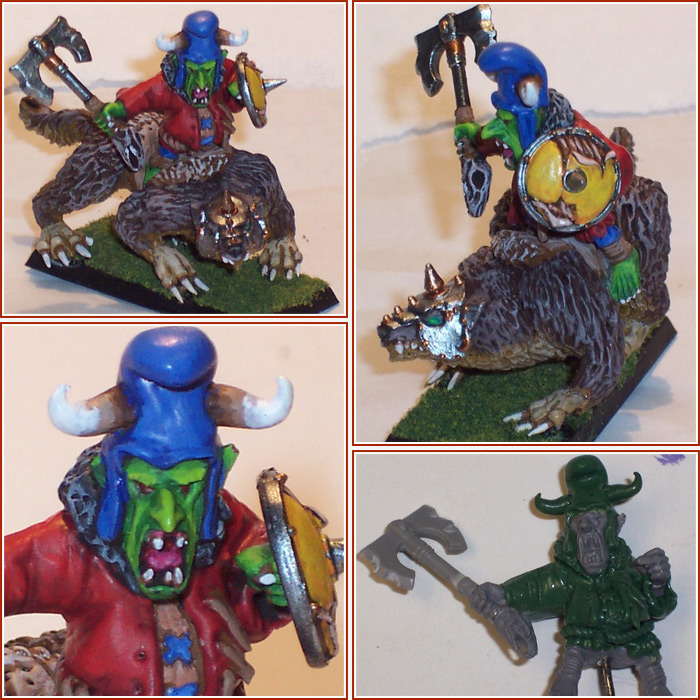 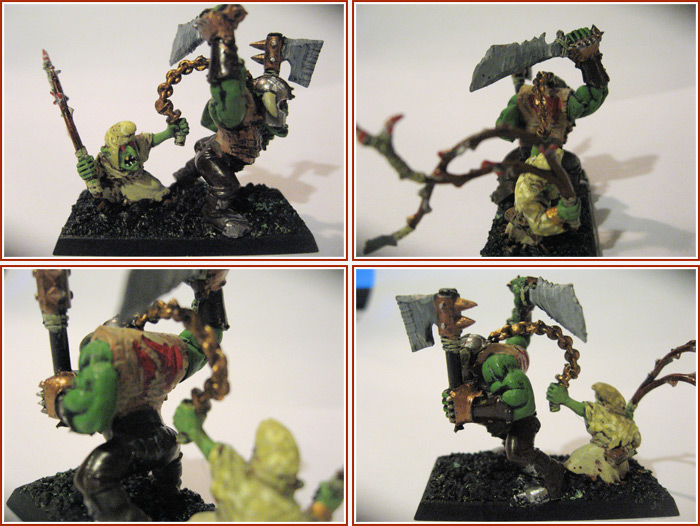 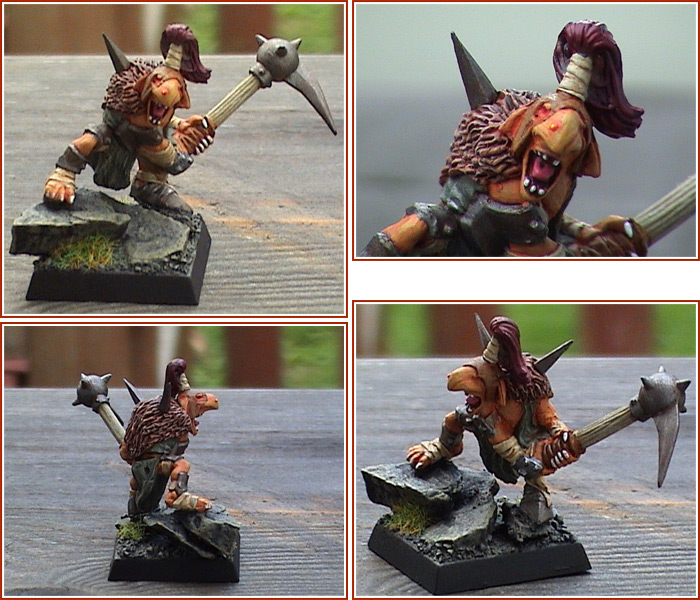 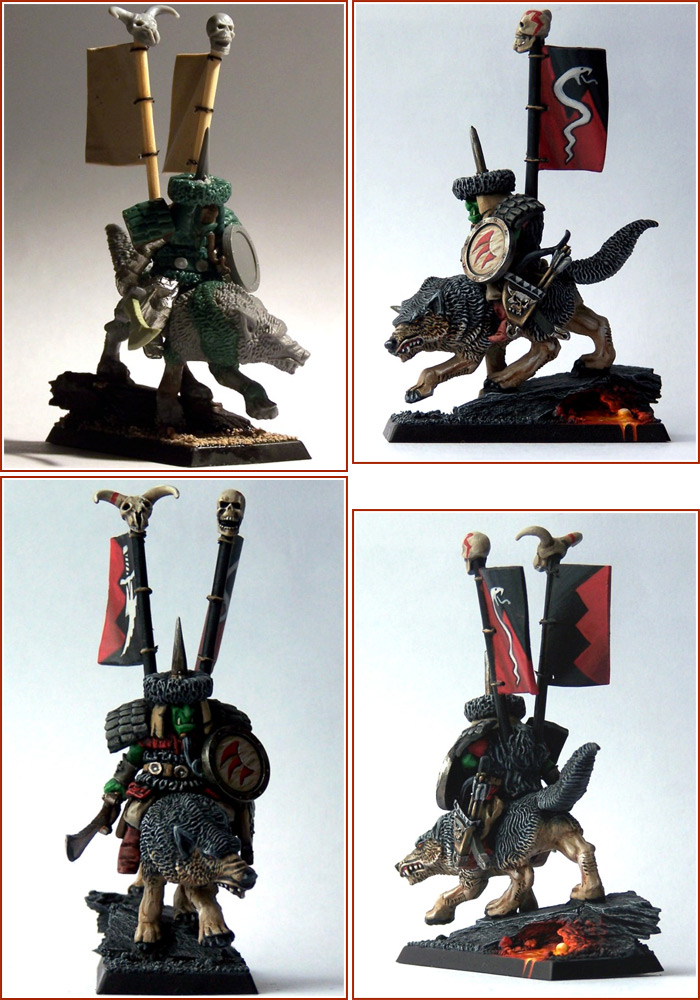 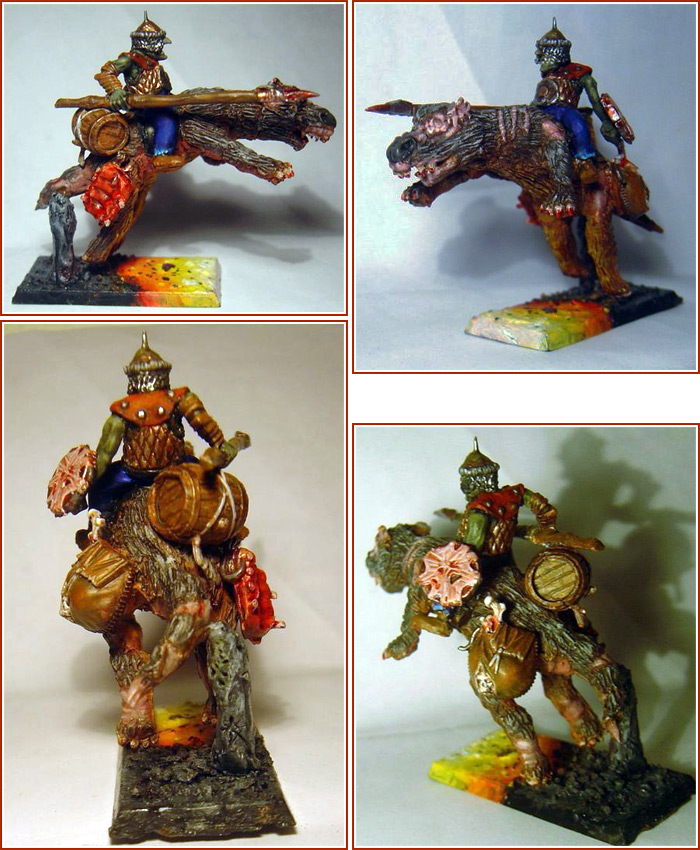 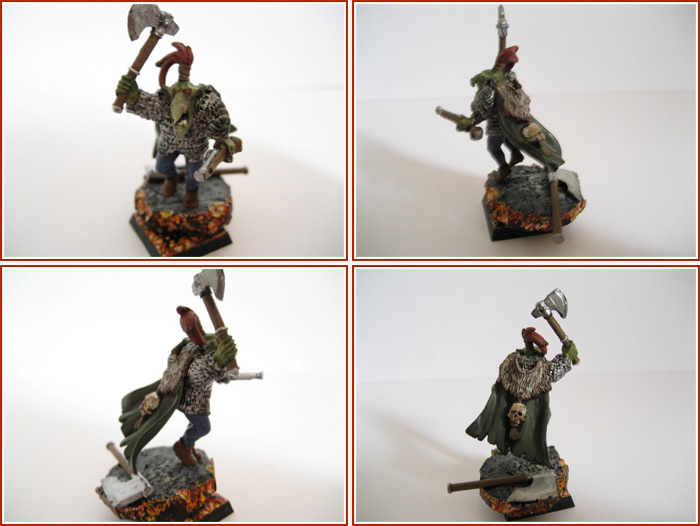 Man, some great entrys… This site continues to churn out great results.

A couple of realy nice entrys there, my two favoreites being number 1 and number 8.

However, im not a fan of back banners and I dont like the head so much on number 8.

I also loke the hat/masky thang on nubmer one and the realy nice paint job (think metallics).

Quite small pictures! But from what I can see, the pose and paint job of entry 7 are really cool. This boy has the right attitude! :hat

I have to say though that he looks too much like a gnoblar, for the nose mainly. I also think the skin tone is quite un-greenskin-ish. My vote goes to no. 1, strong colours, great metallics and the right level of sneakyness. ^^

All very cool entries. I am jealous I wasn’t able to toss mine in, but they all give good inspiration!

I liked 8 the best. The mongol-look is very classic to me. And I also hope that is the look the hobgoblins will go with when we ARE re-released. (a push away from the cartoony look).

I’d love to see a guide on that modeling too… It looks almost identical to the DOW hobgoblins.

Entry 1 is awesome. Good colour scheme, good look all round etc. I would of preferred 7 with a more greenskin look although i know all hobgoblins dont have to look like that. All of the entried are excellent in their own way but my favourite is 1

i voted for number 7

it is a very good converted and painted model, but i can see no names on neither of the entries…:~

Xander but where is my entry?

I send it to you do you remember?

i voted for 8, i love the style of him but it was a hard decision as there are some great entries.

Inspired stuff love them all.:hat off

Xander but where is my entry?
I send it to you do you remember?

Entry 5 gets my vote. It has the feel of the 5th Edition Hobgoblin models but still has that darker edge to it that 7th Edition has. And the Wolf is simply stunning.

Hi everyone, don\'t forget to get cracking on your Golden Hat #3 Entry!

Dont know if this is the right place for this, but maybe this could be changed to 'Dont forget to vote for your favorite Golden Hat Entry!'
PyroStick 1 October 2007 06:05 #13

Hi everyone, don\'t forget to get cracking on your Golden Hat #3 Entry!

Dont know if this is the right place for this, but maybe this could be changed to 'Dont forget to vote for your favorite Golden Hat Entry!'

Argh, so many nice entries. I have no idea who I’m voting for, and I don’t want to vote for mine. Not sure which one I like best; 1 is just plain cool and has a wicked dark paint job, 7 has an interesting colour scheme and a nice pose, and 8 has the classic mongul look and the wolf looks awesome. This is going to be a hard decision.

Let the record show that Revlid changed his vote to Entry #1. I have adjusted the poll.

Some great painting and ideas there. #2 is good, #6 is very fun, love the colour on #7, #8 seems far too independent to be a slave, got to love the squig-bunny on #1. Too many to choose from! I’ll think about it.

You forgot my entry again… Is it on purpose?

Great conversions here, from the subtle to the extravagant and from the hilarious (bunny ears on a squig, I never thought I’d see the day!) to the horrifying!

It comes down to 2 for me though,

#7 would be the one I would take in my army through personal preference, great conversion. Well Done

#8 is how I always pictured Hobgoblins, one of the best looking wolves I’ve seen and a hero that looks like a hero!

:cheers to all who entered

I vote for #1 because, although it looks nothing like I imagine a Hobgoblin to be, or how Hobgoblins have ever been depicted anywhere, it has a Burtonesque charm that I can’t get past. Also, beautiful painting, especially metallics.

EDIT: Otherwise it would have been #8.
EDITEDIT: Also, these small pictures really suck.

My guy looked so much better with large pics.

I voted for the sixth entry as I think it really rocks! The idea is great and the painting is very good. A close second was the 8th entry and the squig-bunny (1st) was simply hilarious! No wonder so many people vote for these.