Well I had a cool idea for the walker the chaos sorcerer used when his legs get all stone. My idea was that instead of having the walker be just a pair of legs it would be a flying dice. The only thing I am having trouble coming up with is how to make it look more like it is a fusion of technology and a demon because I always liked the idea that chaos bind demons into their weapons and guns. Heres some pictures of what I have so far. Any ideas are greatly appreciated.

A common theme that GW uses is fleshy overgrowth of the mechanical components. Look at the new soulgrinder and you will see what I mean. I think the soulgrinder is a bit over the top, but Im sure thats what they were going for. The hellcannon has a better use of this, in my opinion, and is more relevant because it was made by Chaos Dwarfs. In the wheels and gears of the cannon are more subtle levels of the overgrowth. This suggests (to me at least) the cannon is largely mechanical, but held together by demonic sentience.

The disc of tzeentch looks chaotic enough. or the necron destroyer for a more mechanical option.

Yours look nice already. Is it qoing to fly or to walk?

I love what you have already done. The use of gear pieces is great.

Try adding some sculpted daemon faces into the floor of the device. Have the center (floor) be like that of a Hellcannon. Veins, like wires, pumping daemonic lifeblood might also encircle the device somehow.

Keep at it, and WELCOME TO CDO!

We look forward to many more pictures from you!

Thanks for the welcome, Xander.

I am going to try and make it look like it is flying by getting some sort of clean plastic rod. Not sure where to find that but oh well. Thanks for the idea on the soul grinder. I definitely will look that up.

I’m still unsure of what I’ll do for mine, my count as army standard is done but this idea has merit as well… Hmmmmm.

Welcome! Do as Mr. Xander has said, perhaps a strem of fire with the odd, subtle, daemonic face in it trailing from the back and have aethyric energy, flames and lightning coalescing from the ground to and from the centre of the bottom of the disc (it could be the support instead of the clear rod. Alternatively, use one from a GW flyer model

), again with subtle daemonic faces in it…

the metal parts are so cool, this thing so steampunk, it kick’s asses… i love it! i want it!!! :hat

hehe, really cool thing ^^. have you made it from a watch? i wouldn’t do anything magic (fire) or daemonic (organic face) on it, i’m from the steampunk fraction, what you need is a kind of chimney oder an exhaust (don’t know wich is the right word for this, what i mean… the thing on back bottom of cars… where all the smoke comes out :D)… yeah, you need smoke (or steam? or exhaust fumes? damn english! :))

well, I have a place around me that just has a ton of hardware stuff for really cheap. So to tell you the truth I am not really sure what it is from. But it was just a metal gear from something machiney. I have been thinking of just adding the faces like on the hellcannon to the bottom under the boster so it looks like there is a some sort of daemon engine lifting the machine off the ground. As for smoke that is an awesome idea, but I am not really sure so to make it look good. You got any sites, Snotling, to help me with that?

sure i can. there are countless ways to create smoke. i know two

you could just use green stuff to sculpt some. there you have the possibilitys to make it look magic or daemonic. you could create mystic shapes or faces. 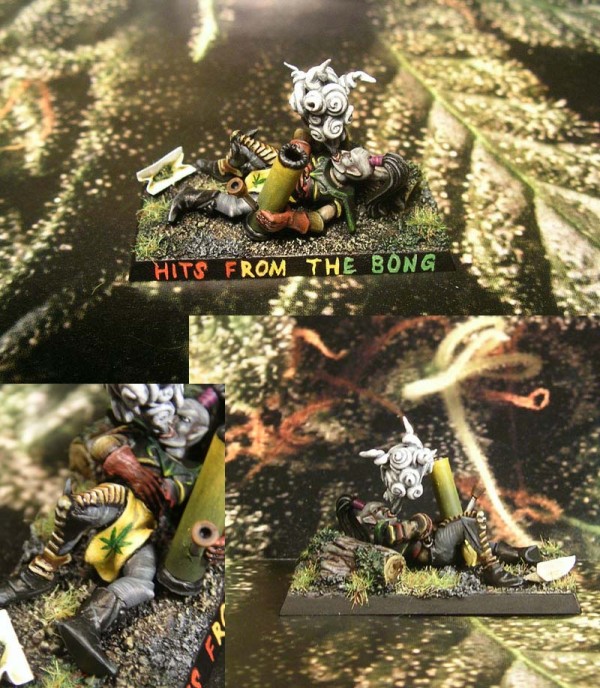 the other way is to use cotton. this way is much easiert and looks even better, imho. right now i don’t have a pic where it is used, but it looks really cool when it’s painted. i suggest you to use this way ^^