[Archive] New Squats in the next mistery box?

Is possible ? New Squats before that Chaos Dwarfs ? :o

Or only is several models in the next mistery box ? :~

Anyone know anything about Dark Heresy? Is this a boxed game?

I doubt somehow this would be the mystery box, FFG seem to be treated as completely separate.

Is possible, but I don’t know.

Dark Heresy is a 40K rpg - the equivelant of Fantasy Roleplay, with fairly similar mechanics I believe.

The link in your post doesn’t work for me, Henroth, so I don’t know exactly what this is about, but Squats are officially dead in the 40K setting. They haven’t just been shoved into the background, they’ve actually been eaten by the Tyranids and are never coming back. The closest we’ll ever see is the Demiurge, an ally race of the Tau, who may embody certain “Dwarfish” tropes in a 40K way, but won’t share the background of the original Squats.

Dark Heresy is like a 40k version of D&D role playing, and i don�?Tt think squats are coming back gw wiped out there home world with a nid invasion so they are not coming back

oh just beat me in there Thommy H

Theres a large discussion about it here largely debunking it as fake due to the sprue and the models next to it not matching in colour, theres even phototshopped close ups - not very good due to resolution.

Bloody GW and thier inability to make a good looking Squat army/list based on the Epic army, had to kill them off didnt they - mumble, mumble

GW need slapping for killing of the squats in the first instance … Hairy bikers with big guns and huge beards whats wrong with that ! But squats I doubt will be on the menu in a long time …

Think this is the link, I guess:

And all the fuss seems to be about this picture: 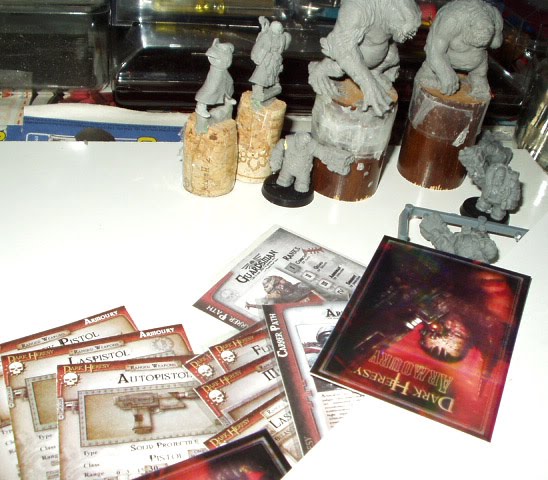 What appears to be a Demiurge

I really doubt its about Dark Heresy. If anything RPG-ish, it would have been about the Rogue Trader RPG, but thats already announced, revealed and with limited edition collectors items already for sale. Not much of a secret…

besides the real problem was that squats were just short IG and having two of the same army was not in the picture for Gw… Like it or not, that’s the way it is…

I really doubt its about Dark Heresy. If anything RPG-ish, it would have been about the Rogue Trader RPG, but thats already announced, revealed and with limited edition collectors items already for sale. Not much of a secret...

No, its a standalone system derived from Dark Heresy. You do not need Dark Heresy to play it.

Regardless, my point is that its not a secret.

I think the sculptor is just using the dark heresy artwork for reference/inspiration.

Could they not just make a Ratling Empires army? I know they wouldn’t be squats, or demuirge, but they would be stunties with beards… in space… If they had power armour and high tech weapons as well…

No, its a standalone system derived from Dark Heresy. You do not need Dark Heresy to play it.

Regardless, my point is that its not a secret.

My point was that it's part of the Dark Heresy range, not a different game. My understanding is that Dark Heresy is supposed to cover three different areas: Inquisitors, Rogue Traders and then I think the last book is for Space Marines. It's like how the Lord of the Rings Strategy Battle game got three editions, one for each movie. Same game, slightly different focus each time.

And why would they do that, Grim? I don't want to start a debate here, but Squats weren't exactly mega-popular when they were killed off. It's only since they fell into obscurity and GW stopped people even mentioning them on their forums (to stop flame wars erupting) that they developed this weird fandom. When 2nd Edition was going and they didn't get round to making a Squat book no one cared. The reason the design team didn't feel inspired to write something for them was because there was zero demand from players - the reason for that is that, actually, they really did suck! They were a poorly focused mish-mash of vague ideas that amounted to little more than "Dwarfs...IN SPACE!"

Then is a new models of Demiurges, but… for Army Book or only for Dark Heresy ?

I can very well imagine the “Dwarfs in Space” theme, as long as it’s done properly and not as ridiculous as the Squats. GW were right to dump them because they understood the whole concept did not feel right anymore. The Demiurg are an obvious try to bring the Dwarfs back to space and if they turn out to be more on the evil side then all the better!

What to make of the picture, well let’s wait and see. These could be prototypes, or fake, or even a new FW project. We’ll know more on Monday.

Well if so i want squats !! they have pirates squats

I don’t really care to be honest if they should do that, simply pointing out that there is already a stunty race in 40k with beards and guns…

Squats/ Demiurg/ Dwarfs in Space, all the same to me. I know there are fans out there for these things, but GW clearly do not want them back as an army. If they wanted to do something the Ratlings are something GW have shown an interest in supporting.

The variant SM and CSM armies in 40k plus all the main titles means GW should not do a new army for 40k for a loooong time.