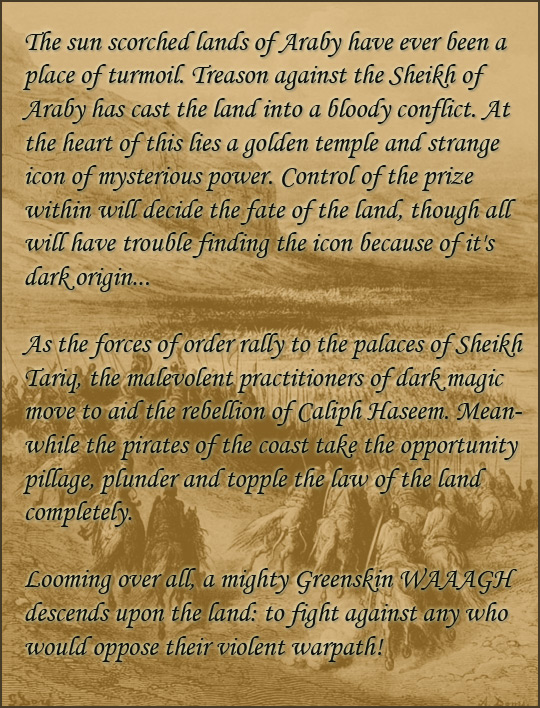 The sun scorched lands of Araby have ever been a place of turmoil. Treason against the Sheikh of Araby has cast the land into a bloody conflict. At the heart of this lies a golden temple and strange icon of mysterious power. Control of the prize within will decide the fate of the land, though all will have trouble finding the icon because of it’s dark origin…

As the forces of order rally to the palaces of Sheikh Tariq, the malevolent practitioners of dark magic move to aid the rebellion of Caliph Haseem. Meanwhile the pirates of the coast take the opportunity pillage, plunder and topple the law of the land completely.

Looming over all, a mighty Greenskin WAAAGH descends upon the land: to fight against any who would oppose their violent warpath!

The fate of Araby will be decided by you! Coming in October 2007, prepare for the Animosity 2 Campaign!

The desert sands contain much oil. Oil to fuel our industry! Gather your forces, fellow Dawi’Zharr, for riches and slaves await us in foreign lands! Hashut! Vorgund! Zharr-Naggrund!

so what exactly is this?

Wow, these are awesome! I seem to have a fetish for all converted armies! I love the Djinns/Ogres, those are so cool.

Maybe my next army is Araby? LOL!

EDIT: These guys are cool:

Hey, wow! Thanks for editing my post, it looks much better

The A2 site will be open on September 1st! I’ll be sure to post a link here for you guys! Best of luck to you during the campaign!

Another campagin? Good good. What was the first Animosity like? Any better than NC?

Hey, wow! Thanks for editing my post, it looks much better :P

The A2 site will be open on September 1st! I'll be sure to post a link here for you guys! Best of luck to you during the campaign!

Player-run campaigns are almost always better, Uzkul. Animosity 1 was an excellent campaign, and I`m sure this one will be even better.

Yeah! its getting close to the start! i love these kinda narrative campaigns with a backstory!

The opening of the website has been delayed, hopefully it will be open this weekend. I am one of the leaders for the Covenant of Shadow and we would be glad to have dwarf industry on our side

Just out of curiosity, does anyone know when you can start reporting your games there?

I’d participate if I had a CD army. T_T

What side should the Dawi Zharr join - the Covenant?

Heh, I have no idea what is going on with this thing. Ah well.