[Archive] The Word of Hashut- Issue #9 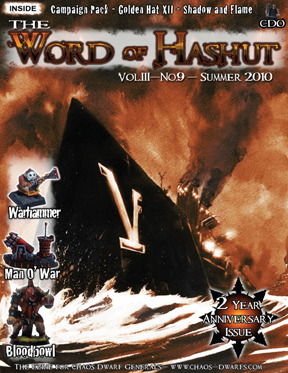 Over a month late. However unlike the last few times I’m not going to say that this will never happen again. the reason is unlike the last few times there was some legitimate reasons for it being this late: Namely as discussed here: http://www.chaos-dwarfs.com/forum/showthread.php?tid=7955 and here: http://www.chaos-dwarfs.com/forum/showthread.php?tid=7433&pid=133459#pid133459

My son is doing much better now, his jaw is healed up and his surgery for something unrelated went well and he is recovering. I’m doing better day by day and tomorrow have some tests to further nail down what has been causing me issues. So suffice of to say I didn’t want to get this out this late but as a wise man once said: "Life is what happens when you are busy making other plans."

On to a few more things I hope you like this issue. Considering the challenges I’ve had I’m glad its now done. But that also brings me to another point: there were a lot of issues with this edition, and I mean a lot. There were a lot of people who did not come through when they said they would. To be completely honest that is not fair to me or the entire Word of Hashut staff. I’m not mad, but at a time when I could least afford it, I was scrambling to fill with replacement content and the plan for this issue basically had to be chucked out the window. In the future I ask that people adhere to the deadlines and if you sign up for something follow through with it. In the bigger, broader picture it will help me get this out on time.

Onwards. There is plenty of content in this issue to enjoy and I hope you enjoy the effort.

As with previous issues there are a few more ways to view the Word of Hashut:

FOR THOSE WITH LOW SPEED CONNECTIONS: you can access a low res (its around 30 megs) version here (caution it will look terrible if you print it from this file)
Click here to download the Low Rez version of The Word of Hashut!

As I always say there will be something that we have missed so please let me know and we will get it corrected.

Lastly l’m looking forward to Issue #10, we have a cool theme in mind and if we can pull it off I think everyone will appreciate it, stay tuned.

Thanks to everyone involved in the latest issue!! And thanks Willmark for putting in so much time on this one at a difficult time. Cheers mate!

oh cool I wasnt expecting WoH so its a nice surprise. downloading it now.

Great work Willmark and to every one else on the Word of Hashut Team, cant wait for my internet to get connected at my new house so i can down load this and start reading, only 5 days but they are going to be a long 5 days to wait

Thanks for yet another great Word of Hashut!

Thank you guys and especially Willmark for another great WoH! :hat off

I will read the issue today - smooth and extensive!

It likes the front page.

It likes the front page. :)

Another awesome issue, cheers guys, and in particular Willmark :cheers

No small part to you however

For me the issue held a lot of promise. In particular the Campaign Pack could have been much better. Not that what we did was bad but there was supposed be a BR for each scenario… I blame myself most of all, that was way too ambitious.

Glad to see you managed to pull it through, shows that you’re not letting the difficulties of life get the better of you! Downloading it now. Let me know if I can help with the next issue!

soooo, I guess you did get my edits

glad to see that.

Not that what we did was bad

Yes as in you wrote it, I did the layout, artists provided art. This is not a commentary on how it turned out rather I had a much bigger plan for it.

I actually think it works better just as a campaign - the battle reports would detract from the narrative at this point. They’ll work better in the next issue.

Well, this is a great issue

- I find the vs HE tactica really useful saying as I always lose against one of my best friends High Elves (damned Dragon Prince - in the end I always just stick a massive unit of Hobgoblins on him so he can’t do anything for the rest of the game ;P!

Thanks to everyone that was involved,

Guess I’ll wait for the Issuu version as the other one makes my computer go all wonky!

I gotta say Baggronor, that comic continues to impress.

Thommy H: If I’d known you were doing daemon engines, I’d have used that Earthshaking Canon to match and saved Chaos Squats for another time.

The Daemonic Engines article was actually written for the previous issue anyway - which is why it’s not as 8th Edition compliant as it should have been: I had to retro-fit it at the last minute to make it work for 8th! I also didn’t do a very good job of that because I didn’t have the new rulebook at the time. So, if you plan to use the Daemonic Engines rules in your games, please use the following errata: