As many people may or may not know, in 2005, the black library released a novel called Grudge Bearer by Gav Thorpe. In the last chapter, there is a notable event involving the Chaos Dwarfs. They engage in battle with the Dwarfs and many things are revealed about their potential new look and fluff.

Amoung the things revealed is a great war machine called a Kollossus. Here is a small excerpt from the book which should constitute fair use for discussion purposes.

It strode forward, a great mechanical giant, belching smoke and fire, the air around it shimmering not just with heat but also diabolical energy. Plated and riveted iron and fashioned in the shape of a great bull-headed man … ‘A kollossus,’ … From firing platforms on the behemoth’s shoulders, Chaos dwarfs spewed out gouts of fire, incinerating dwarfs by the handful as the mechanical beast stomped though their lines. Its heavy feet crushed them with every tread, while shells chattered forth from a rapid-firing cannon mounted in the mouth of its bull head.

I decided to convert such a beast, using him as either a unit filler, Great Taurus, a Death Rocket, or perhaps some Ogre unit. So here is my attempt at a Kollossus.

The parts! An old Ork Dreadnaught, some parts from those dollarstore cannons, and a 60mm base I fashioned. 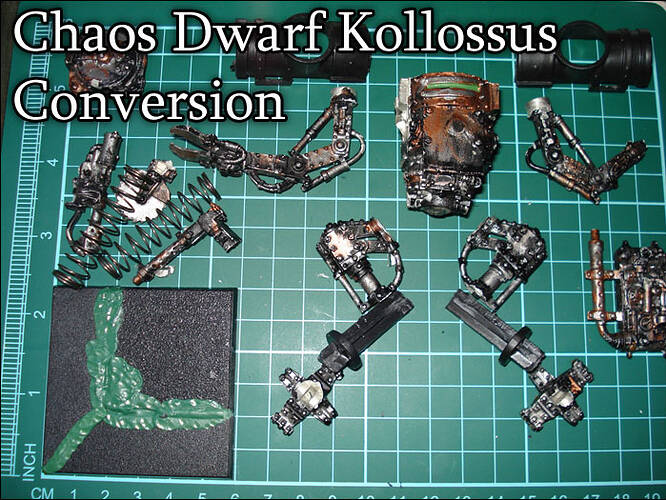 I built the legs a bit at a time. I wanted them to be stable so they could support the weight of the structure. I pinned each joint as I built it up. It could stand freely after each addition. 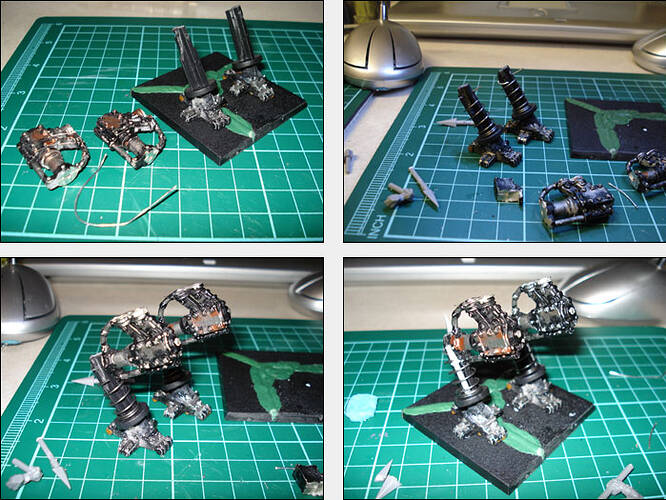 After I attached the torso and all still stood freely, I glued the feet to the base and Green Stuffed the joints and made hooves. I also rigged the arms into some of the cannon parts with the use of some 20mm bases as well. 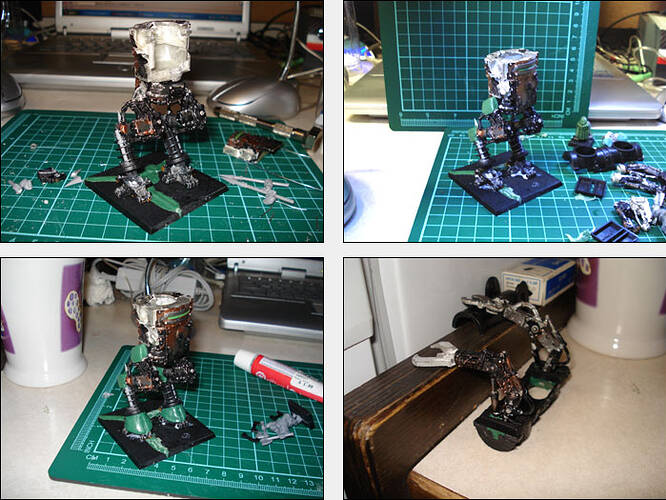 Testing how it would look, I set the arms/shoulder on top without glue. I proceeded to add magnets inside the manholes and made up two Chaos Dwarf crew for the shoulders. I also glued the Stubber (that’s what Necromunda calls them anyways) to the back-pack as a second exhaust. 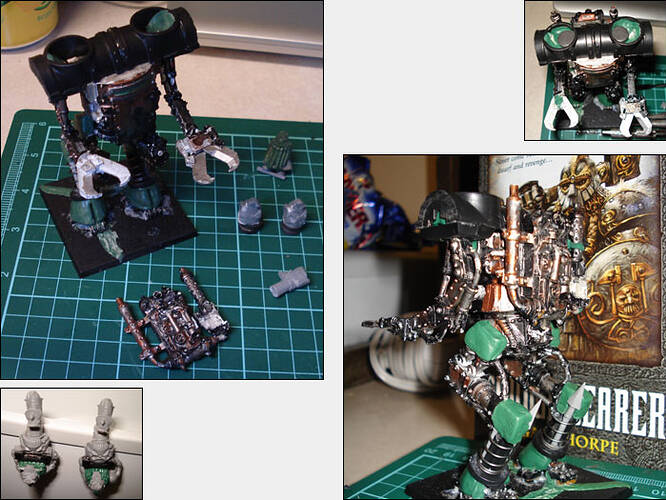 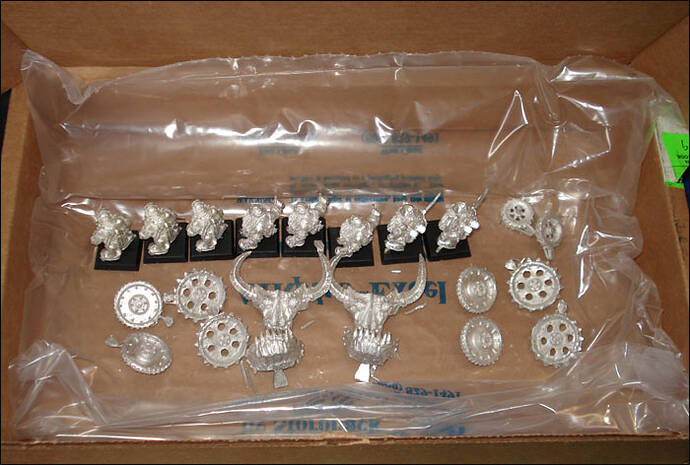 Using the Bull Skull, I used GS to attach the pieces to the head-piece. I added a wheel from the BFSP Dwarf cannon as a fan exhaust at the back. (I drilled 8 holes in it) 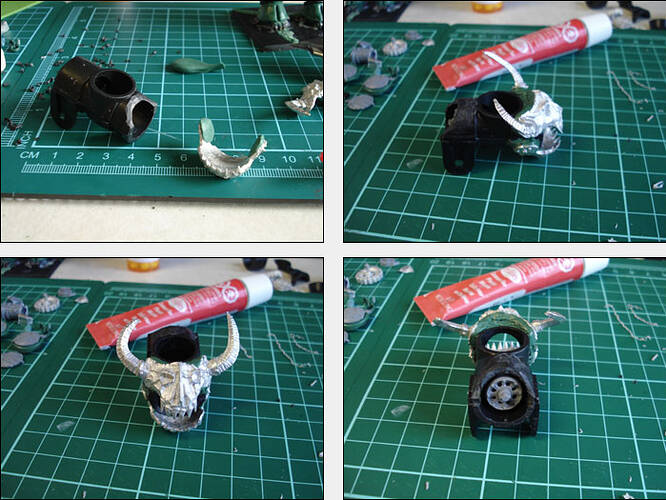 Here is stacked up next to some Chaos Dwarfs. Torso looks a bit weak… (Blunderbuss article coming soon) 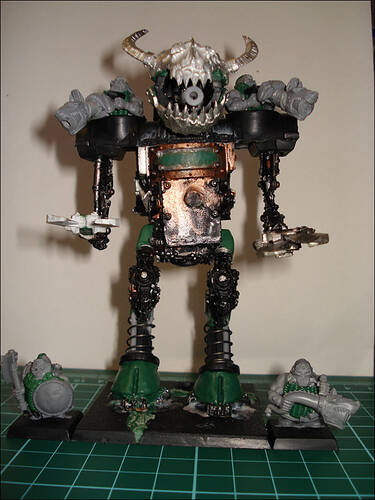 Built up the torso! 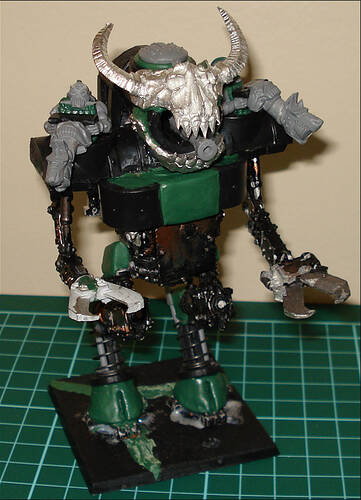 Also, to use it as a Great Taurus, I can swap the manhole covers around. Or you could have all 3 holes covered, if you like. (I still need to make a character to fit properly inside it) 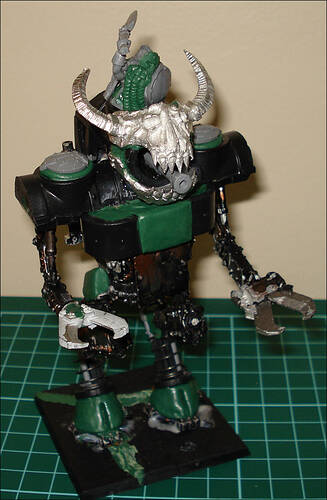 Having no real plan in mind when I started, other than what is written in the book, it came out very well! I am very satisfied with the result.

EDIT: One thing I forgot to mention, I am going to be adding rivets to the GS joints.

I have taken the advice of many and bulked up the limbs of my Kollossus, your comments and suggestions are welcome as always! 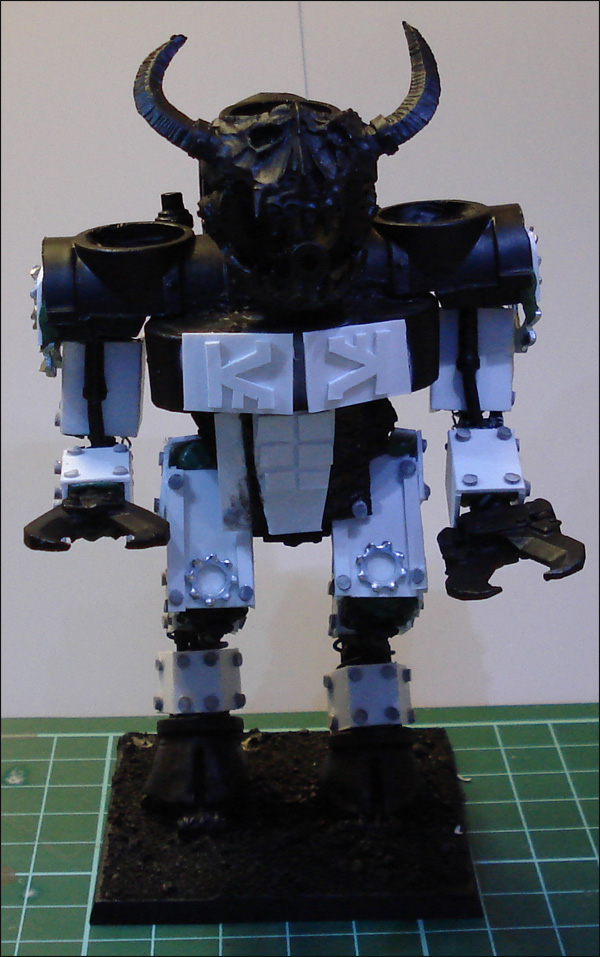 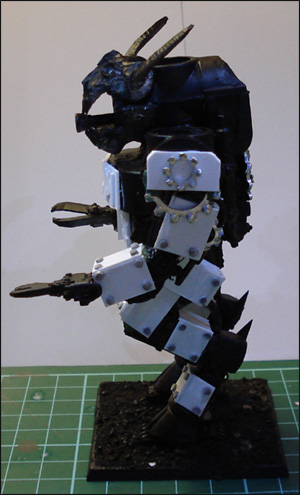 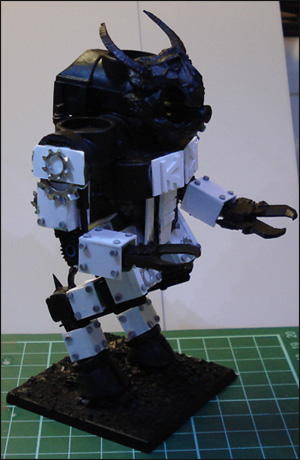 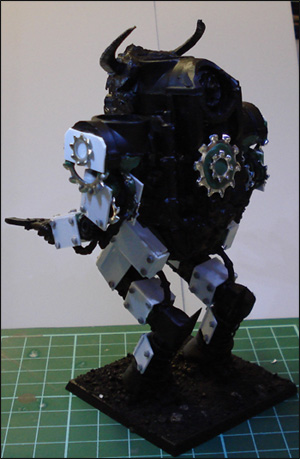 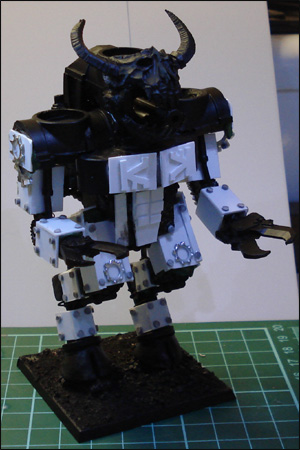 I’d love to hear your thoughts!

! I have the same gears on my helcannon wheels, what a small world

It looks excellent. Once you are finished painting it, it should be extremely cool. It won’t really be as replicatible as it could be, but well… I suppose others can make their own versions. It is good to have a prototype.

First that model cries out for a decent base, not quite sure what, but for such an impressive model it really needs one.

Second IMO you should add some chains, or skulls on spikes, or something to give it that bit more detail.��Not quite sure how to describe it, but it looks like its too new…?

When you paint it you could do some large ‘scratched rust’ areas, which I could have a look for some links.��Basically areas that may not be black/ red painted metal etc, but where two parts grind against each other and scrape off rust or grime that’s built up. This would be a better way to paint it than something brand new IMO.

Third I think you should stick some bolts onto his hooves. They look a bit too plain, and this might show up more when its painted.

Good suggestions, as I did before, I shall take them to heart.

Great work dude, I love the way you’ve bulked up his limbs; it looks a lot better now. Looking forward to seeing it painted!

Glad you think so! Thanks for the comments!

Here are a few links

Damn it! Now I feel I need to build one!

:hat off to you, thats pretty darn impressive. I do have one suggestion though which might make it fit more with the background. In the passage you included, it described a “rapid-firing cannon mounted in the mouth of its bull head.” It would be good if you maybe used a multi-barrelled sort of weapon, such as a hellblaster (esp. if you can find the classic one), do something with the organ gun bits from the dwarf cannon, or anything along those lines. Other than that rather pedantic quibble, its a great model

I hear what you are saying AGPO, I actually have the classic Hellblaster, and looked at it. It was too big for his mouth, maybe I will add a couple more little cannons to it.

I had the same thoughts as you.

ah well, maybe we’ll just have to wait for GW to release a mini-hellblaster or something. I do like the blunderbuss conversion though, and I have a fair few of those classic chaos warrior horns laying about the place. I recognise the mask and the marrauder arms, what else did you use?

What else did I use to make the guys?

cool conversion to bad you cant use it

As requested Xander, here is my sugestion for your rapid firing cannon… … …:0

Its the thing on it’s left, our right…can you guess what it is yet?