Blood Bowl is one of the best games GW has ever put forth, and with the Greebo Kickstarter campaign it was finally time for me to take the plunge and get myself a truly awesome looking Chaos Dwarf team. And thanks to Greebo’s record-breaking delivery (less than a month after the campaign ended I had the models on my desk) they were in time to keep my BATG 2022 score low.

These are among the most awesome models I’ve ever seen (of any game system) and I am glad I went a little overboard and got not only the basic team (with all the kickstarter goodies it came with) but also a few add-ons and star players. There was barely any work to be done, no mould lines, no leftovers from printing supports, no warping or flossing, only the Bull Centaurs required a little bit of milliput for gap-filling after assembly. And the details are amazing.

Here we have the main team: 6 Chaos Dwarf Blockers, 8 Hobgoblins, 2 Bull Centaurs and a Minotaur. The Chaos Dwarfs are quite large (scale creep is real) but look great, but honestly it was the Hobgoblins which really sold it to me. How crazy is that? Hobgoblins! Still, I love those.

Next we have the coaching staff. The coach on his throne, a team mascot, a cheerleader and a biased referee, I also got the markers for Bribe, Apothecary and Mage. On the far left is the bonus Greebo Gargoyle they threw in with every pledge and on the far right is Iron Steve, the guitarist from their pretty cool Chaos Dwarf rock band. I just had to have the model, instantly fell in love with it. At least I could restrain myself from getting the rest of the band…

And lastly we have the Star Players. There are models for the (currently not supported) legacy Chaos Dwarf star players Hthark the Unstoppable, Zzharg Madeye and Rashnak Backstabber, one for Grashnak Blackhoof (who just got rules in Spike! 13) and good old Morg ‘n’ Thorg, plus the current star players The Black Gobbo, Lord Borak and Hakflem Shuttlespike. And one for Akhorne, because look how adorable that little guy is!

I will have lots of fun painting these. And playing, probably. Maybe it’s time to actually get the basic game? Or at least the templates and some dice off eBay…

For my first Golden Hat XXXVIII entry I painted “Iron Steve” from the Greebo Dwarvageddoom campaign.

I have focussed on painting quantity for quite a while now, and while I am perfectly fine with my tabletop standard and newly used battle-ready standard, it has been a long time since I took my time with a single model - and I have neglected training that particular muscle far too long!
Since this was a Golden Hat, I really wanted to leave my comfort zone with this model. And that meant three main things: trying to paint that flame, making use of that large canvas which is his cloak and make his skin more interesting by giving him appropriately rocky tattoos, all of which would be “firsts” for me. 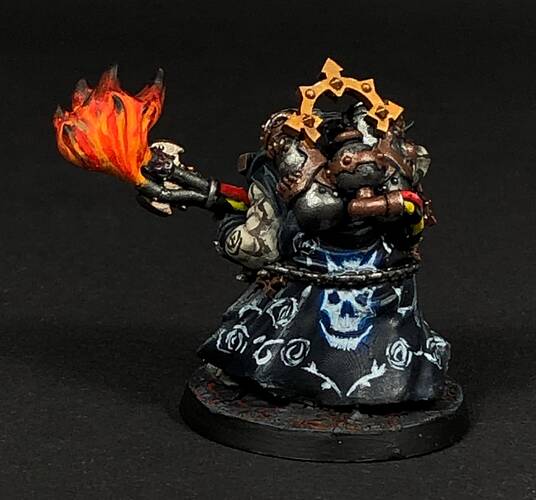 I am quite fond of how it all turned out, the flames look nice from behind (the front is nice enough, but I don’t reaaaally like how the flames are modelled there, backside is much nicer) and the freehand coat came out good. It was truly a thrilling experience, and an area where there is a tremendous learning curve ahead of me, especially the gap from how I imagine stuff and how I am actually able to paint it

I decided very quickly on a skull, heavily inspired by a Squidmar video. I wanted to have it surrounded by roses, which in the end was much harder than I thought and actually more difficult than the skull. In my mind I saw a dense group of high-detail roses, similar to something like this. But my skill level was nowhere near being able to paint it

I therefore decided on something a little more abstract, which turned out not half bad. 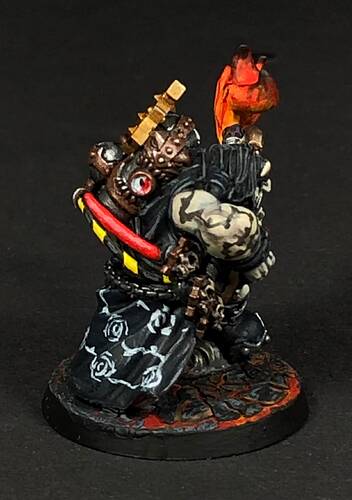 I anyway wanted to paint rose-thorn-vine kind of things on his arms, so I just continued that element on his cloak. I think the coat turned out better than the arms, I should have made the tattoos really go around his arms instead of staying on the visible surface, but I realised the mistake too late. The hazard-striped hose was one of the first things I decided on, that was a total no-brainer for me

I am quite happy with the base, which I did in a way I wanted to do for a long time. I always wanted to try using the citadel texture paints over a layer of paint so it stays visible in the cracks. I was not 100% sure it would work, but thankfully it did and it looks pretty rad, if I might say so myself. Especially considering it’s basically no work at all! I liberally slapped red paint on the base and mixed it randomly with orange and yellow directly on the base. Then it’s just the regular thick coat of texture paint (Mordant Earth, in this case) and that’s it. I actually liked the stage before the texture paint already, gives off a psychedelic vibe 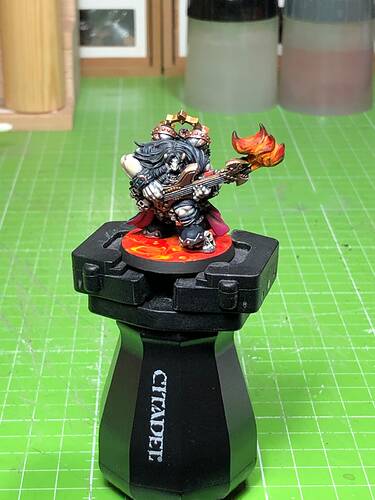 And here he is, the bass player of “Flowers is for Elvsess” (with a grateful nod to @Abecedar, I think about that phrase at least once a week 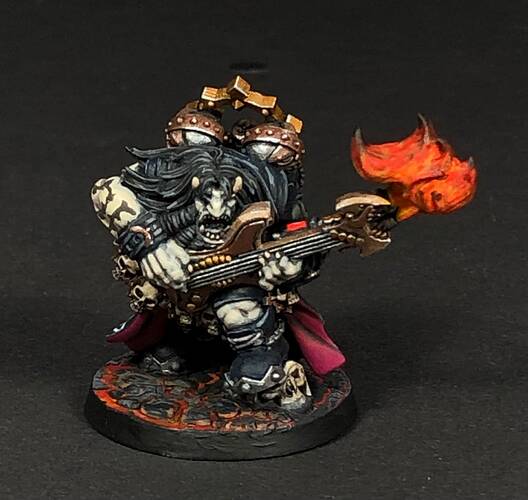 Love this guy! Amazing work on the freehand, that was such a worthwhile leap. Would never have guessed it was a first attempt

Thanks mate, much appreciated!
It’s a great model, and the slightly larger scale did not hurt with the freehand obviously

So I did some dryruns of varying success 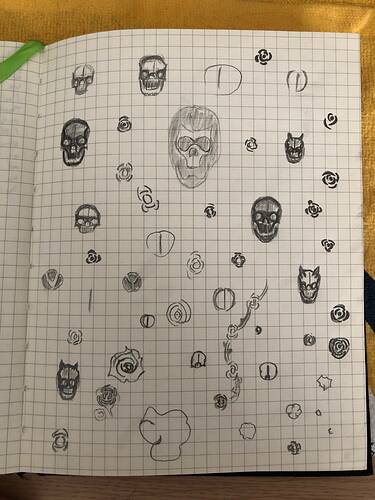 So happy you entered to comp @Jasko! Great model!

Reminds me a bit of Lobo.

Now I want the Mini too…

Now I want the Mini too…

I am getting a lot of joy out of the Greebo models even unpainted and without having an actual game of blood bowl. And those Chaos Dwarf rockers are awesome. I am still fine with only getting the bass player, but my conviction is crumbling already