Set the stage! Light the lights! Stop buying so many things!

[January Update]
Disaster has struck me.

[February Update]
With the addition of some texture paint to the bases, I have put 70 models at Tabletop Standard.

These consist of:
50 BFSP Night Goblins - 32 spear and 12 bow - with two command sections.

20 Stormhobgrots - I think I’ll use these as Black Orcs.

They are not well painted but they are definitely off the list. I will go back over them more to make the ash on the bases better and tidy up some drybrush stains.

Black primer was an experiment I doubt I will repeat. It works well enough for modern night goblins which are mostly robe, but Black Templar contrast is easy to use and allows for zenithal highlighting. Ive still got 40 black primed night goblins to go but will give them a rest for now.

I did receive my Russian Alternative K’daii this month. I also got a chance to buy the Hobhound Handler for a decent price and couldn’t let that pass me by.

Bashed out 18 Chaos Dwarf warriors which have been on my painting table since before the Goblinning. 16 warriors and 2 heroes, who promptly got Absolutely Nothing Useful Done against Jac in my first game since 2002!

I scored a classic Doom Diver this month, in a lot of junk I promptly sold on. Big win for me to only take a +1. I’ve uninstalled eBay, that’s how serious this is.

A storm is coming. Instead of finishing individual regiments, I have been stage-painting about 200 greenskins. When the payoff comes, it will change the game.

For the glorious Chaos Dwarf army of Mourngard, I plan to paint: 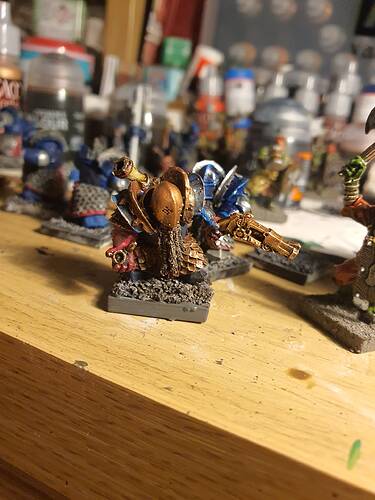 For the filty Greenskin slave rabble beneath Mourngard, I plan to paint: 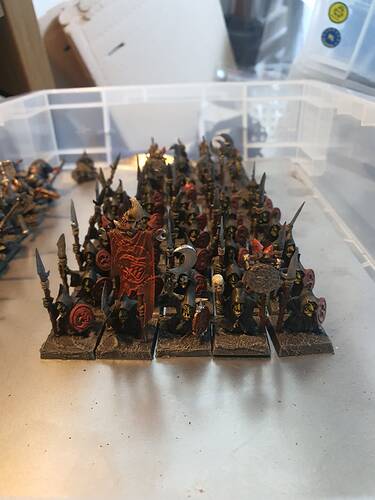 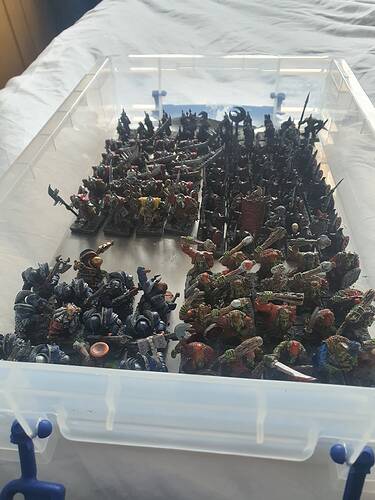 For my Team Yankee 50 point intro list, I plan to paint:

On completion of this project, I will spread some boot polish on toast, toast it, scrape off the polish, eat the bread and presumably get so drunk I go blind.

I had a plan for an orderly 50 point list. But then I realised batch building was more efficient and I could do batch painting just as easily.

If I get them all done, I will then presumably drink a tall, stiff quad of vodka (the Narkomovskie 100 grams) and watch these heroes of the Soviet Union crash and burn on the Elbe. Or the Don.

Scroll to the top for my JANUARY CRISIS!

Tough luck! Damn those birthdays and the people who love us

Good things come to those with much goblins. Looking forward to February

Somehow for me, positive is negative and negative is positive on BATG.

Stay tuned for The Goblinning.

Big text updates! Pics to come later when I’ve finished tidying up glaring errors but the Night Goblins have put me into a negative score at last. See top post for details.