@Oxymandias : Saw this on facebook, and for some reason I thought of your army 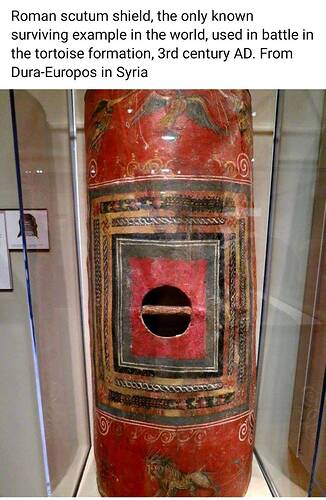 Yeah @denelian5 ive seen this one! It’s a amazing isn’t it. That hot dry climate has managed to preserve a wooden shield for so long. Makes me feel vindicated about the red shield choice!

the more I look at this, the deeper the curve is compared to our modern presentations of it. I wonder how typical it is.

Well, as to what was a typical curve of Roman Scutum shields, I have no clue whatsoever. On the other hand the proportions in this particular picture seems somewhat warped from the objective/distance used to take the photograph. Or maybe it’s just the cropping of the image that warps it?

Would all the shields have been painted identical, or woud there have been some leeway of personalizing the shield? We all know the romans loved to scribble on things, why not their shields? Or maybe have an artist add imagery to symbolize accomplishments or divine attributes to help guide them in combat?

According to bits and pieces on google, they went through distinctive eras, encompassing both the convex and flat designs.

Visual designs did indeed vary but largely by manufacture, not personalisation; I’ve found no examples of significant graffiti, but I’m also not clear on whether the average legionary was literate. That said people are people and soldiers are soldiers, I’m sure personalisation took place. There just aren’t apparent examples I can find so far.

It’s also noteworthy that provosts are likely to have purchased shields in relation to specific recruitment events and campaigns from carefully instructed manufacturers, who would be given formal standard specifications. This is why many paint-jobs reference the legion, most notably the surviving examples of the Legio Hispania. Defacing or personalising the external face of the shield, when it presents the ‘face’ of the formation in such a way, sounds like a disciplinary issue to me.

The curve in this picture may also be due to warping over time. It’s just thin sheets of wood glued together. It’s a marvel it’s even in tact at all isn’t it.

Here’s a hot take from Vegetius:

“Lest the soldiers in the confusion of battle should be separated from their comrades, every cohort had its shields painted in a manner peculiar to itself. The name of each soldier was also written on his shield, together with the number of the cohort and century to which he belonged.”

so, right you are @denelian5 - personalisation did take place, but from this sounds like more of a practical and formal usage.

@Oxymandias - regarding the curve, warping was inherent to manufacture and intentional for the usage of the shield:

"The scutum was sealed together then heated and placed in a press while still hot. This press would give the distincive rounded shape. It was then allowed to cool naturally, then when it was removed from the press the scutum would retain it’s shape.

The convexity on that preserved specimen does seem extreme and may well have been influenced by age - but it also compares favourably to contemporary depictions: 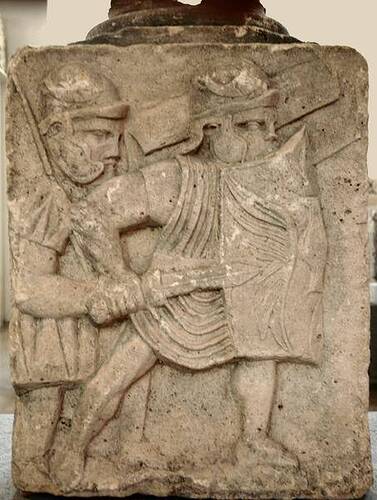 from a pedestal in Mainz, and 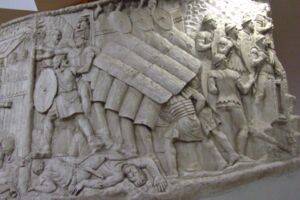 Flatter scutums (scuta?) also started to appear around the imperial era but Trajan’s Column is considered evidence that they coexisted, which makes sense, because design and manufacture were spread across Europe with each legion over time, and changes in design would take similar amounts of time to cascade outward.

It’s not clear to me from reading why the flatter design became the standard design, but presumably has to do with shifts in formation doctrine and challenges presented by the time-consuming and error-prone wood warping process.

Interesting, I almost mentioned “name/number of cohort” in my example but thought to myself “- no… that’s more of a practical thinking than personalisation, so I’ll leave it out”

Thinking of it, as you said: defacing the all important (from the perspecitve of recognition) outside would most probably be a disciplinary issue… but what about the inside of the shield, facing the soldier? Now wouldnt’ it be interesting to find little divinations or such there? Or simple phrases like “hold the line”. This is all conjecture and wishful thinking, of course but I seem to remember something of the sort from some other culture… I just can’t place it at the moment. ^^

On the construction: heating and press glueing pieces of wood to form what is todays equivalent of plywood (but with thicker parts/layers) is quite form stable (look at press glued furniture). I don’t think age in and of itself would warp it that much, now the conditions of storage: wet/dry/warm/cold/underground/under constant or varying pressure is a totally different subject. Especially wetness/humidity could do quite a number on the shape I would think.

The shield in the photo seems to have the handle intact (not sure if it’s the handle but there is a horizontal stave visible through the center hold) which would help stabilize the shape of the shield. From the looks of it, it seems that the top and bottom have a lesser diameter than the middle of the shield where the “handle” is placed. This could indicate a slight distortion, but than again the perspective of the photo is a bit off so it could also be just the objective warping it. Or just how it was designed.

I don’t think the wood working process would be that time consuming or error prone when done on a larger scale. Industrial settings has always had a way to work out the kinks.

I agree that the manufacture of the curved scutum would have been mastered - but I don’t understand why the flat scutum, which already existed as per spanish indigenous examples and was markedly inferior for the formational and individual warfare conducted by the legions (per the deflection point above), would have replaced the curved scutum over time. So, I just speculatively made that up.

And yes I personally imagine the interior of the shield would have full on “born to kill” barracks-room stuff, maybe even religious or superstitious trinkets, just because that’s what we all do. I put stickers of wallabies on my work laptop. It’s a natural human thing. I haven’t seen any examples yet though.

regarding the curve, warping was inherent to manufacture and intentional for the usage of the shield:

Sorry didn’t make myself clear. Yeah the curve was definitely in the design of that shield. Was more speculating that the curve may have become more exaggerated over time due to warping

I seem to remember hearing an archaeologist on a radio program talk about runes on the inside of viking shields, animal names the likes of “bear” etc. but I can’t seem to find them - so I’ll settle for these example s of runes being inscripted on shield handles, albeit in silver or brons so they might have been ornamental shields for all I know: 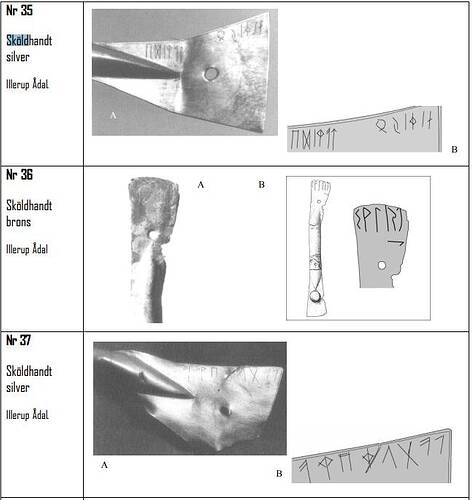 The middle one is interpreted as a name “Svarta” - meaning Black. I’m more inclined to interpret it as “Sparta”.

Seems totally fair, I was thinking about it as I was writing my last two replies

As to replacement of the curved scutum with flat shields: Following the crisis of the third century, the infantry equipment of the Roman legions were simplified for cheaper and more streamlined production and field repair.

Segmented plate armour (lorica segmentata) was phased out, because it required special facilities to stamp out and was a lot more difficult to repair in the field than mail (lorica hamata). Helmet designs were changed to a simpler but still practical form. Pila were replaced by plumbata darts. And simple oval flat shields, which had long been a part of Roman armies, completely replaced the advanced curved scutum.

Much of the Roman army remained lethal and professional for a medieval military into the 11th century, but it is still painful to see the best parts of antiquity disappear due to cutbacks. 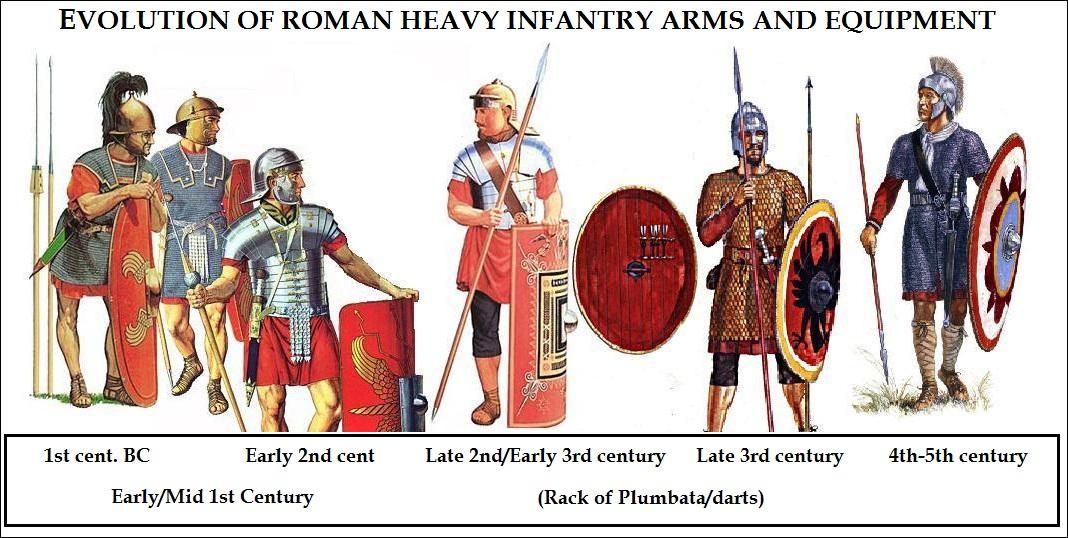 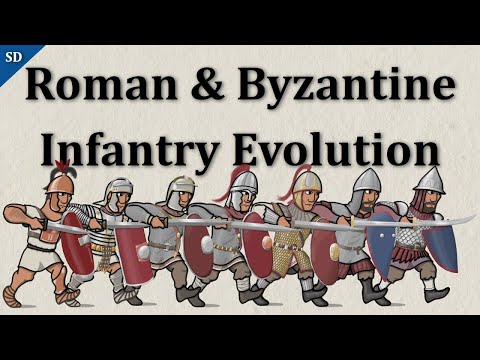 Speaking of the jaded Imperium Romanorum, a parallel process happened with its high culture, as described by Thersites at the very end of this video:

To give but one example: Rome had largely been fairly easy-going when it came to sexuality for most of its history. But after the third century crisis, Roman writers are very prudish, very judgemental, very uncomfortable with sexuality. They also tend not to have much of a sense of humour, if any. Almost all the Roman literature, and I guess also all the Greek literature from the Roman period, that occurs after the third century crisis, is very bitter. It’s acrimonious. It’s not fun. There’s no life in it. The scholarship becomes very stilted, very backward-looking.

Rome just really isn’t the same, and it’s hard to explain if you haven’t dealt with the material in great detail. Just the fundamental mood of Rome, the fundamental mindset just goes through a major shift after this fifty year crisis. In many ways, you can argue that, for all practical intents and purposes, the Roman empire ends with the third century crisis, and the middle ages begin."

I can support this view based on my own readings. Ammianus Marcellinus is interesting, but he never ignites laughter. Procopius is likewise largely bereft of humour, despite thrilling material. Suetonius, in contrast, offers plenty of gossip fun and jokes, having Augustus quote the Illiad’s lines for a spear-waving hero upon seeing a well-endowed dockworker, or immortalizing this rhyme on the building of Nero’s golden palace following the great fire of Rome:

Even the dry Tacitus will sometime skewer someone with his sharp pen. On Galba: “He was a man whom everyone thought would have made for a good ruler, if he had not ruled.” The later Roman stuff makes for more boring reading.

This draining of fun from the culture helps explain emperor Julian’s self-deprecating humour in the Misopogon (the Beard-Hater), which did not find any takers at all in such a humourless age, least of all in the very Christian city of Antioch. The bookish Julian was refreshingly out of sync with his own times. Filled with the enterprising energy and vigour of high antiquity, he modelled himself on classical Greeks and Romans. Julian wanted to revive both paganism and Augustus’ Principate, and sought to tear down the stilted and openly autocratic Dominate established by the nigh-on totalitarian Diocletian. To Julian, the emperor should be accessible and approachable, the first citizen among theoretical equals, and able to both take and give jokes, quips and puns. Just as had been the case before the crisis of the third century, before humour withered amid severity.

I put stickers of wallabies on my work laptop. It’s a natural human thing. I haven’t seen any examples yet though.

Well, the Romans very much liked their graffiti, even in military contexts, so I think it is very reasonable to believe that they personalised their gear to some degree when it was not too obvious.

I agree that the curved form offered some distinct advantages while the disadvantages (mainly the shield being somewhat unwieldy in one-to-one combat) where mitigated due to formation warfare.