They look very wretched indeed. If they are hobgoblins, im not sure you could get more impoverished for enslaved gobbos. You could also make a chaos dwarf slave driver at the back of the unit just for fun too : )

Not sure what stats they will use yet. I’m bidding on a large lot right now. If I get them these will be sneaky gits and I’ll convert up loads to be spear and shield looking ones for regular ground pounders

Cpmodels do norse dwarves. The shaman looks the part for your army. Not sure if he is tall enough? £2 though…

@Zoddtheimmortal ill have a look! 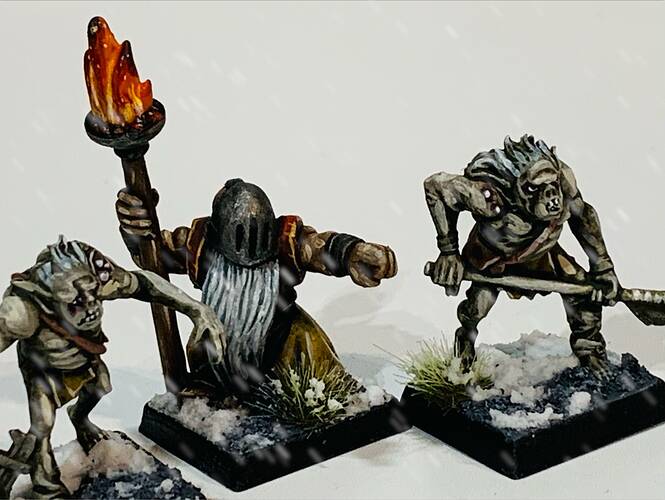 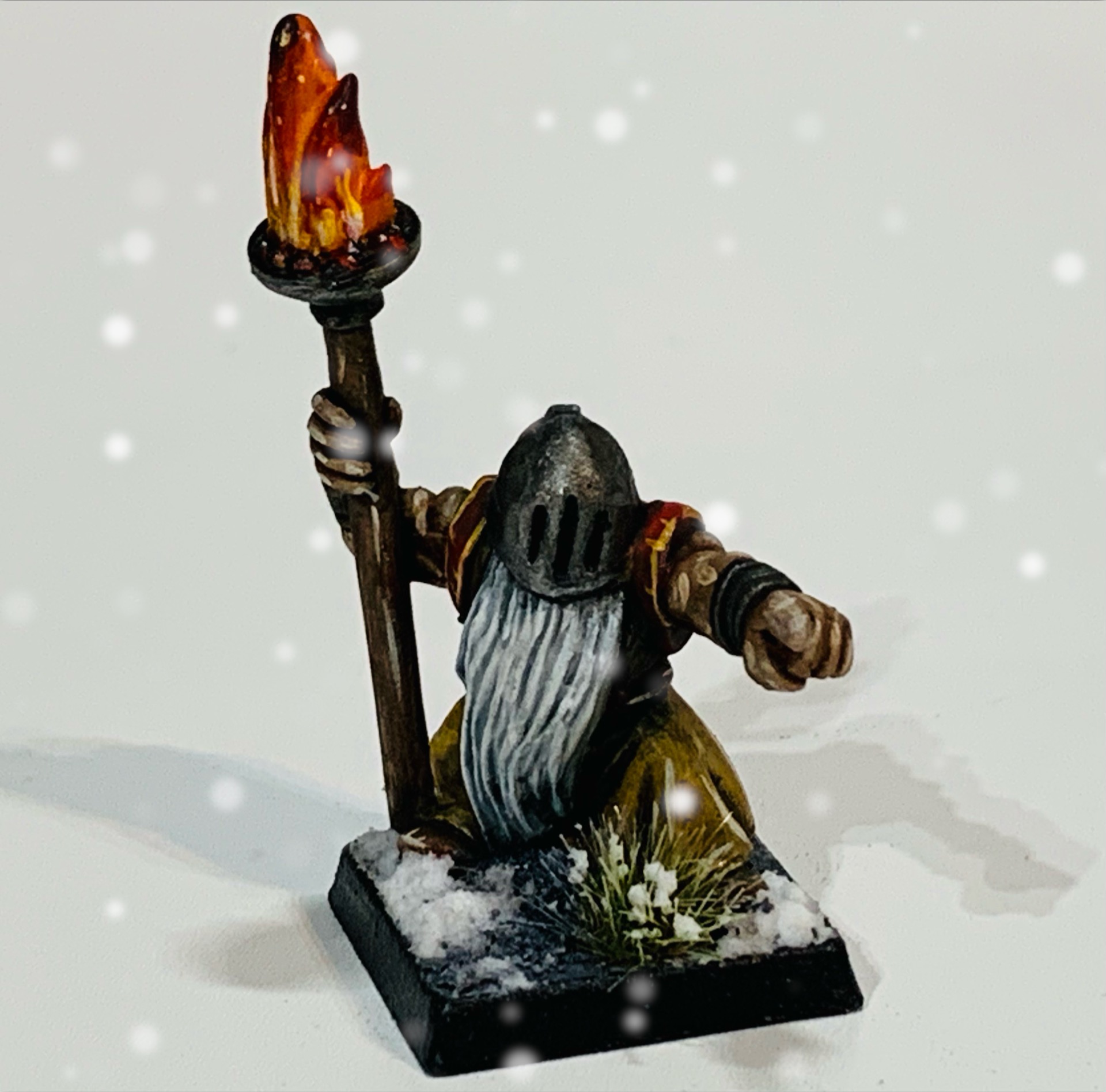 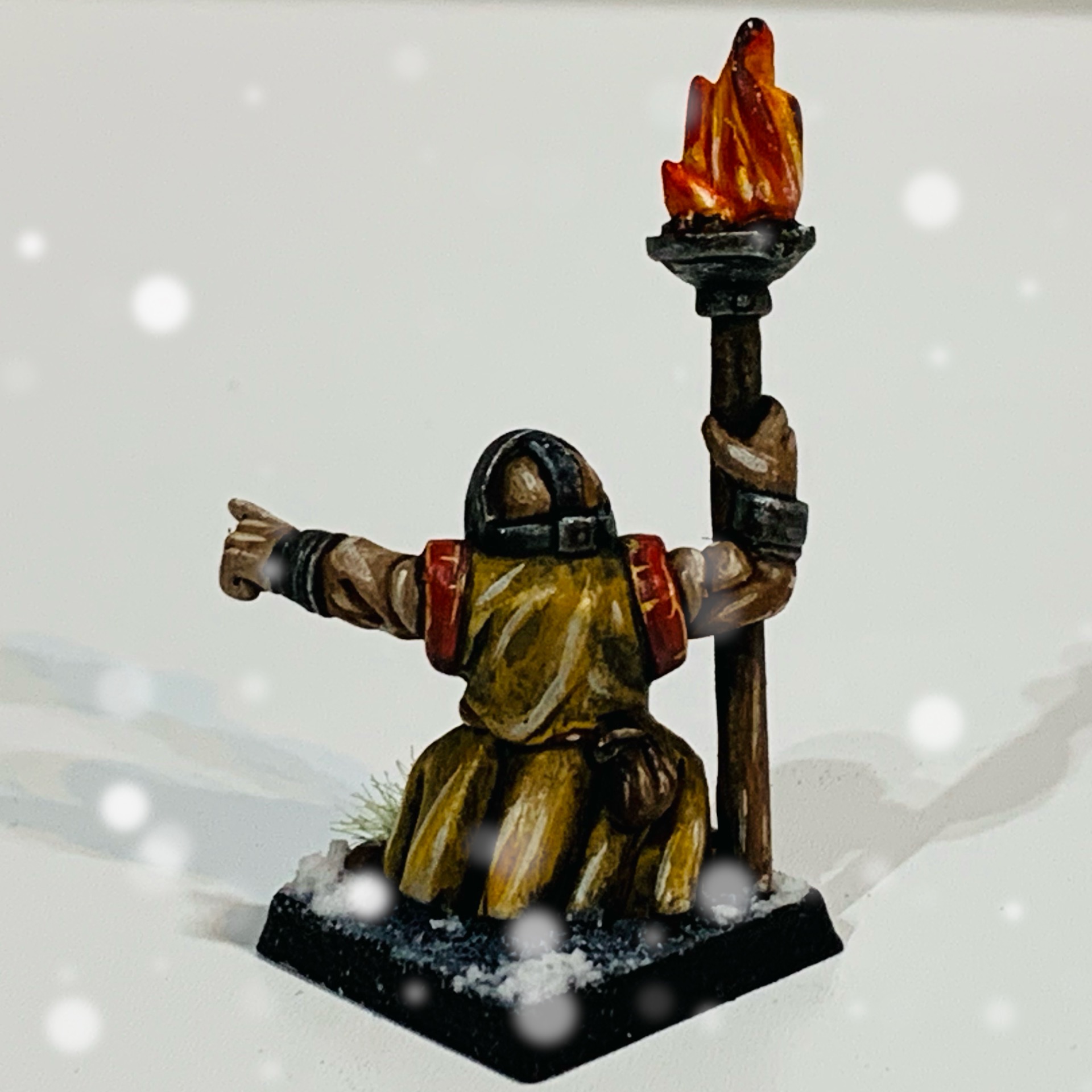 We are joined by a sorcerer from Titan Wargames. I think this is sculpted by our very own @Baggronor ? Correct me if I’m wrong!

Very nice, a great fit with the Hobgoblins

I think this is sculpted by our very own @Baggronor ? Correct me if I’m wrong!

You are indeed right!

Great painting as well, Id love to get my hands on those goblins…

you’d have to be quick! @Oxymandias is building a horde army with them it seems

@tjub haha @MichaelX is referring to the fact that I just won about 200 of them on eBay. After selling the extra bits they came with they cost me 20 pounds (240 SEK/ 23 euro) - proper bargain.

If you want some goblins drop me a message bro. I’ll never paint them all hahah

They look like they could be used as ghouls too, in your colour scheme anyway. 10p a model…nice

As it should be haha

As opposed to my previous favourite army- forest goblins. Id go to any cowardly lengths to save the little buggers from their doom. Hiding in forests or behind allies, i guess it was in character but also inherently wrong…haha

i guess it was in character but also inherently wrong…haha

Haha these will be sent to their deaths in their hundreds without a second thought.

But if a single dwarf dies…there will be retribution

Tiny little update: was on a hobby hangout call with some CDO homies the other day and needed to find a model that I could achieve something with in a small amount of time. This Minotaur, ogre, monster thing was nearest to hand. 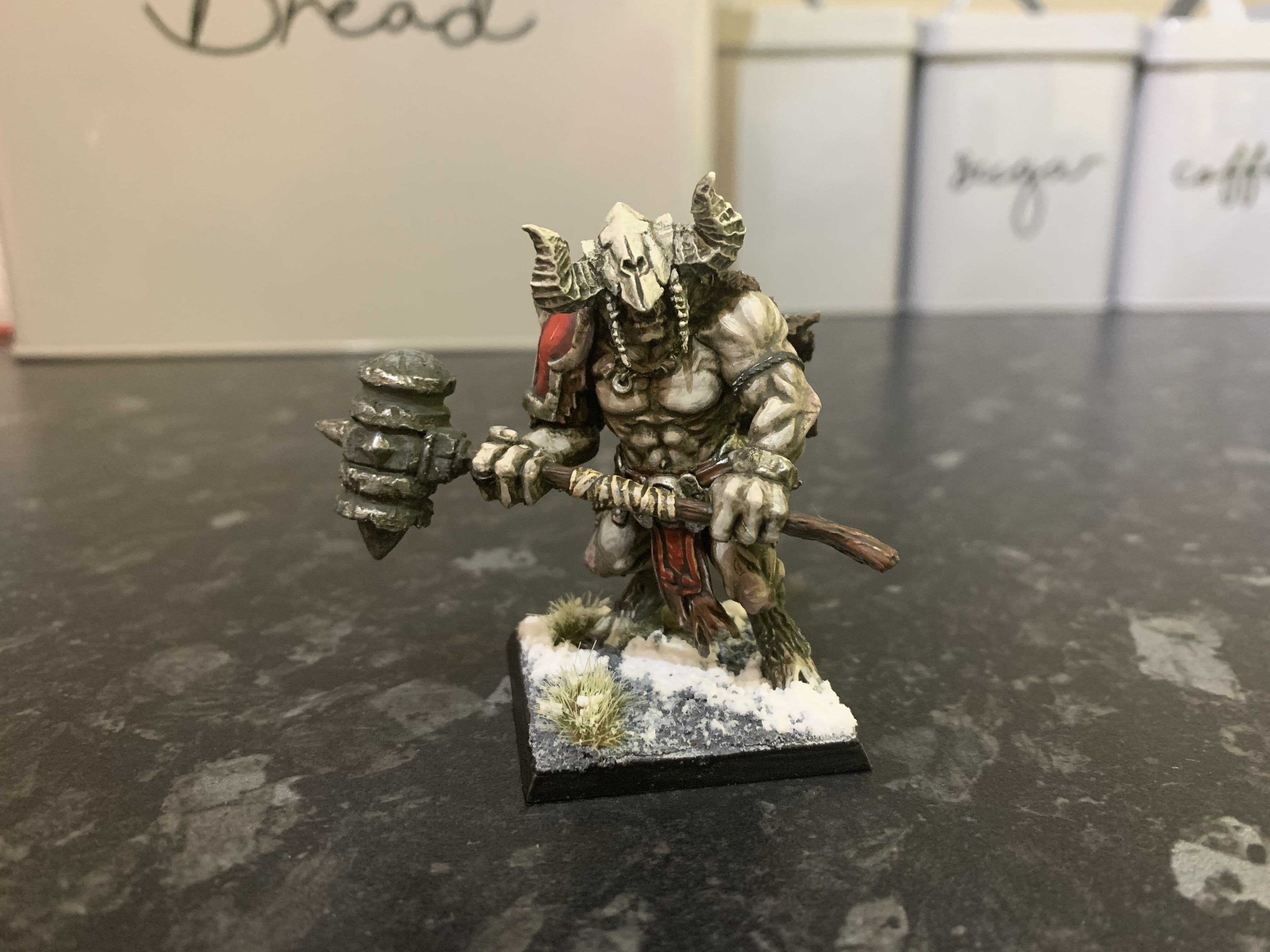 What company makes him? No idea. Where did I get him from? eBay? I think? Haha.

He will serve as a dutiful unit filler to add to the barbarian ragtag look in trying to achieve here. 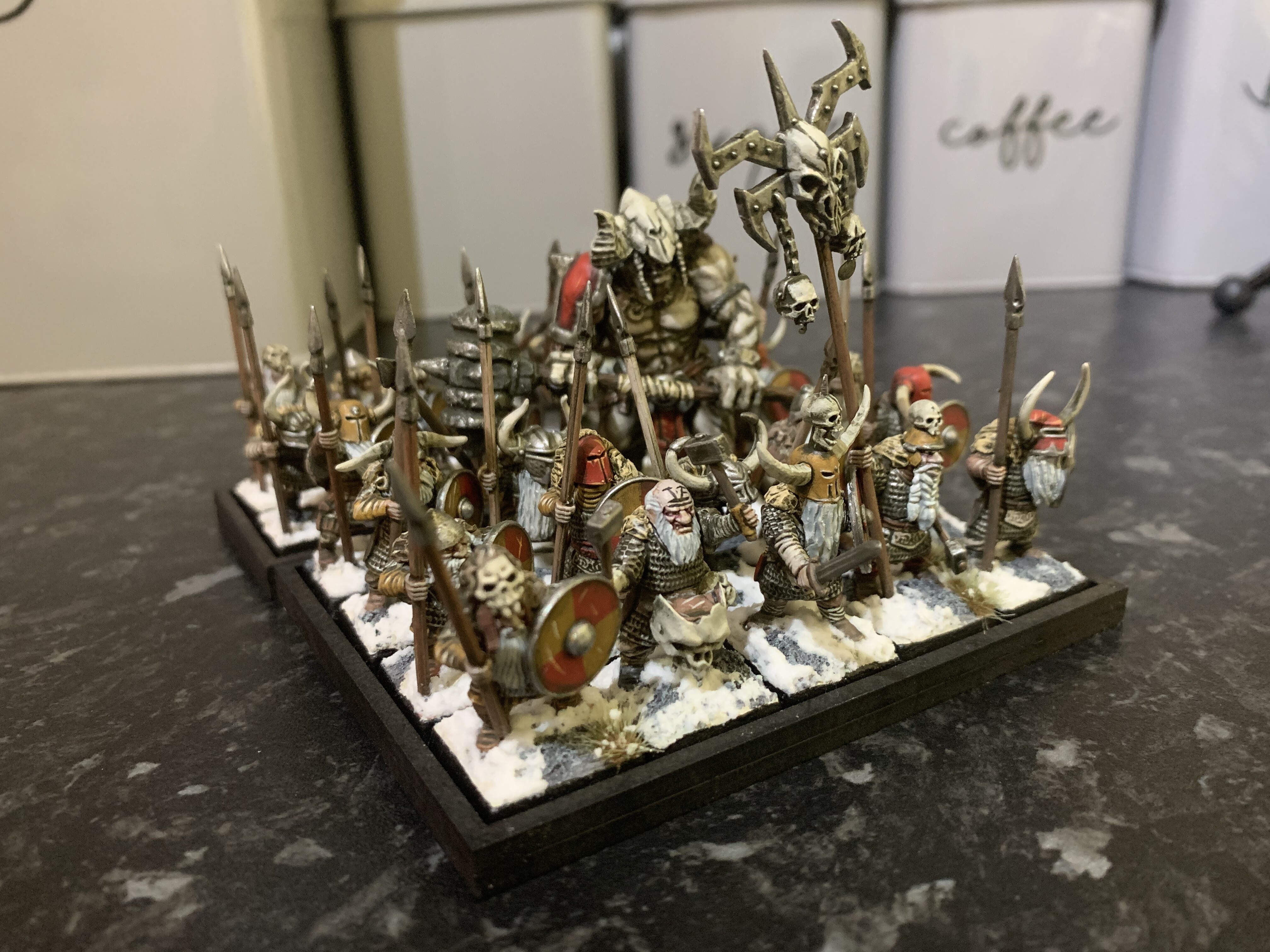 Wow these are amazing, this is going to be great sight to see all completed 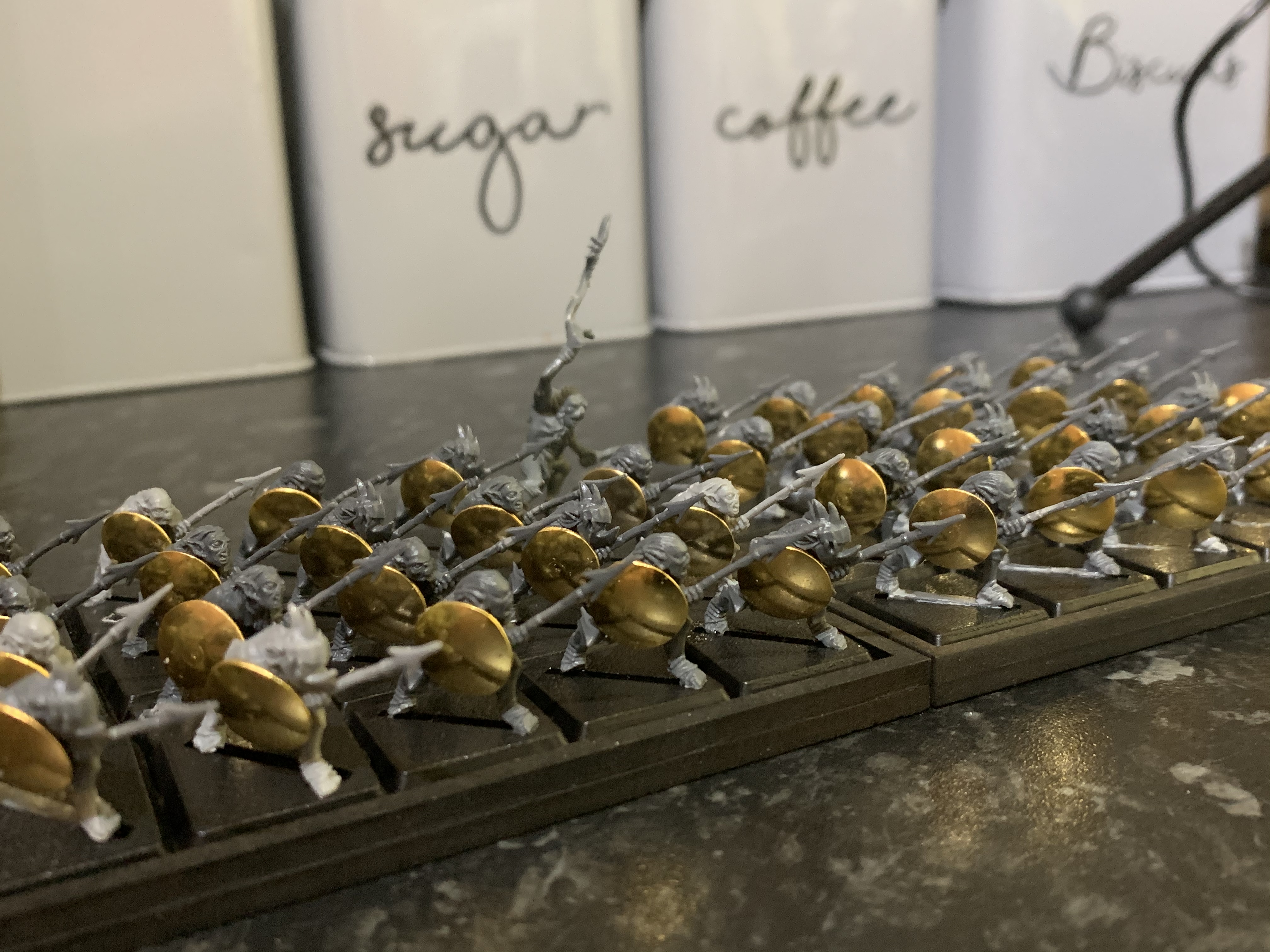 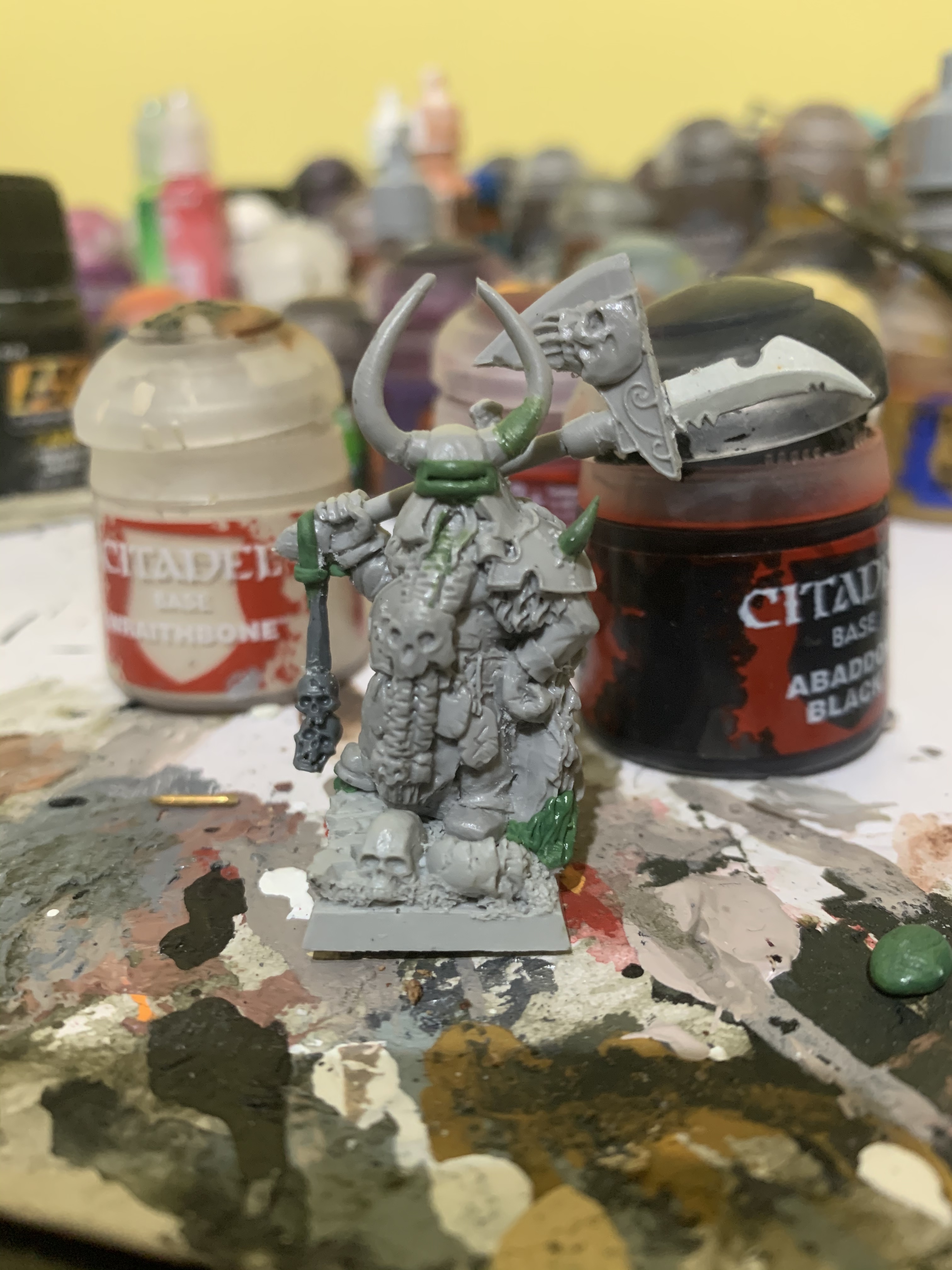 Are those shields pins? Awesome, that’s one of the best solutions for round shields I’ve seen ^^

Dang, you are cranking these out at such an incredible speed! And it all looks great as well…

So I won this cool chaos dwarf model on eBay. Very cheap. This was the picture 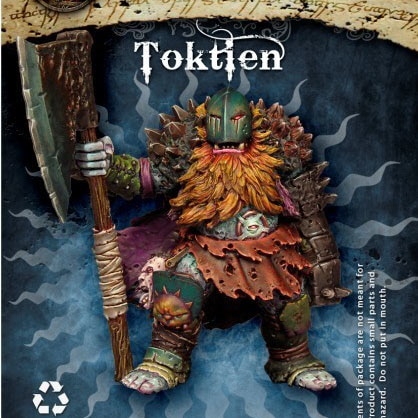 I thought he’d be perfect.

But then he arrived… 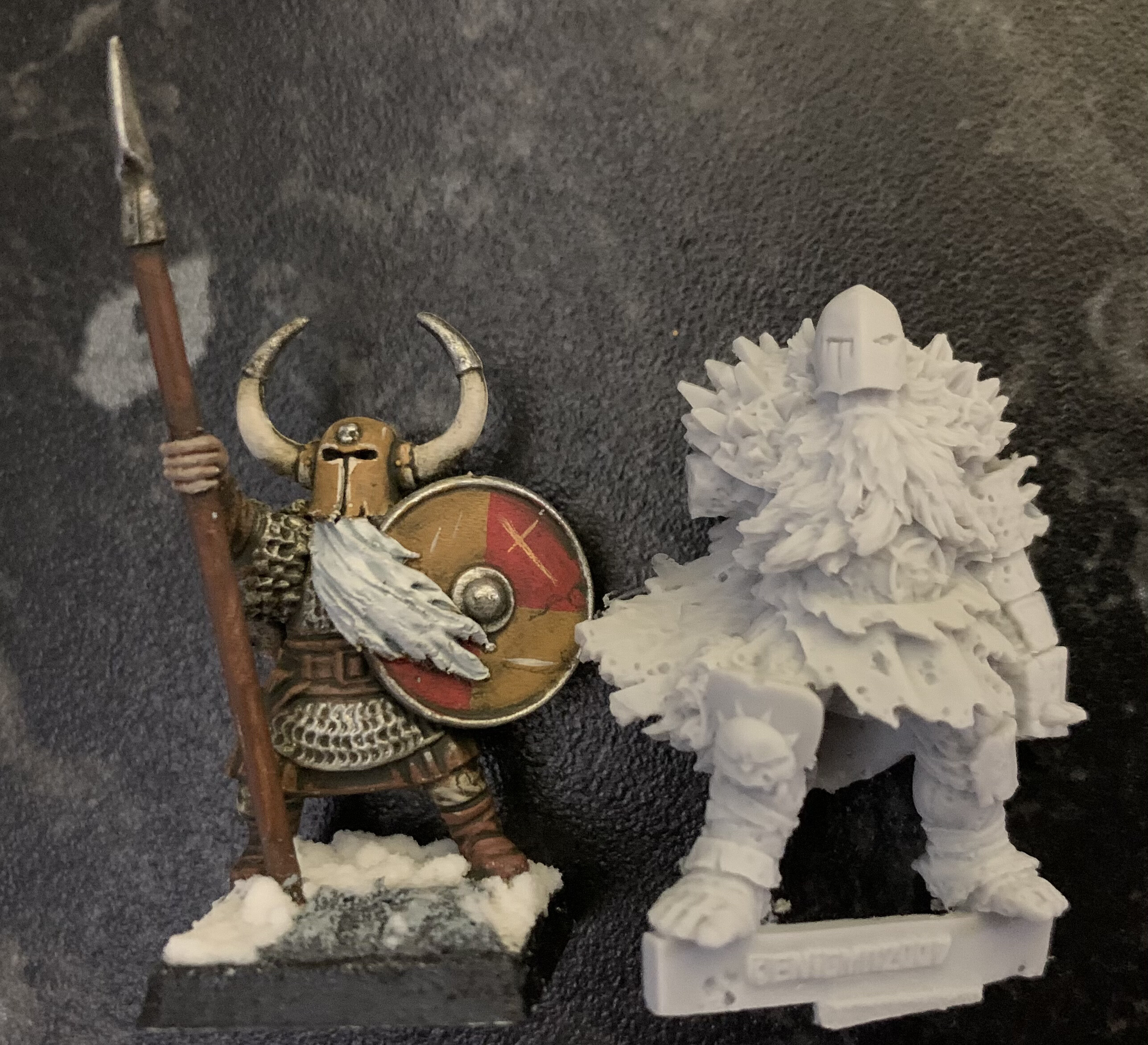 He’s absolutely massive! Taller than a stormcast eternal! Now bare in mind these oathmark dwarfs are almost a full head taller than most dwarf models.

So I had a plan 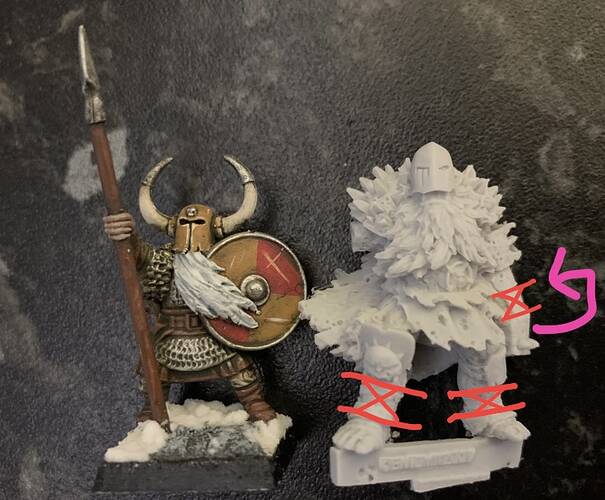 I decided to remove part of his legs (the easy bit) and part of his arm (the hard bit because it was attached to his cloak) in an effort to make him more dwarvish. 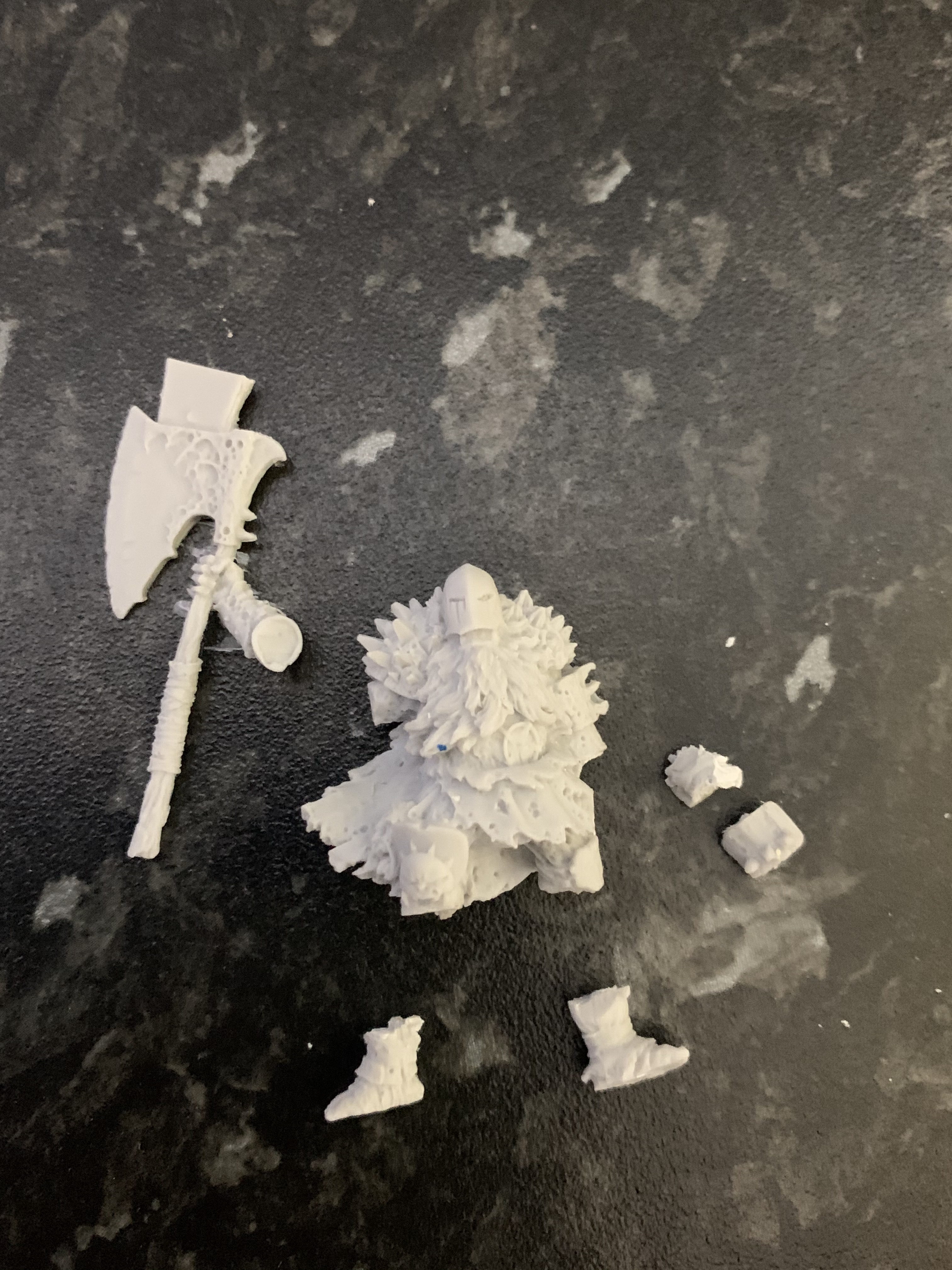 Here is the result of this 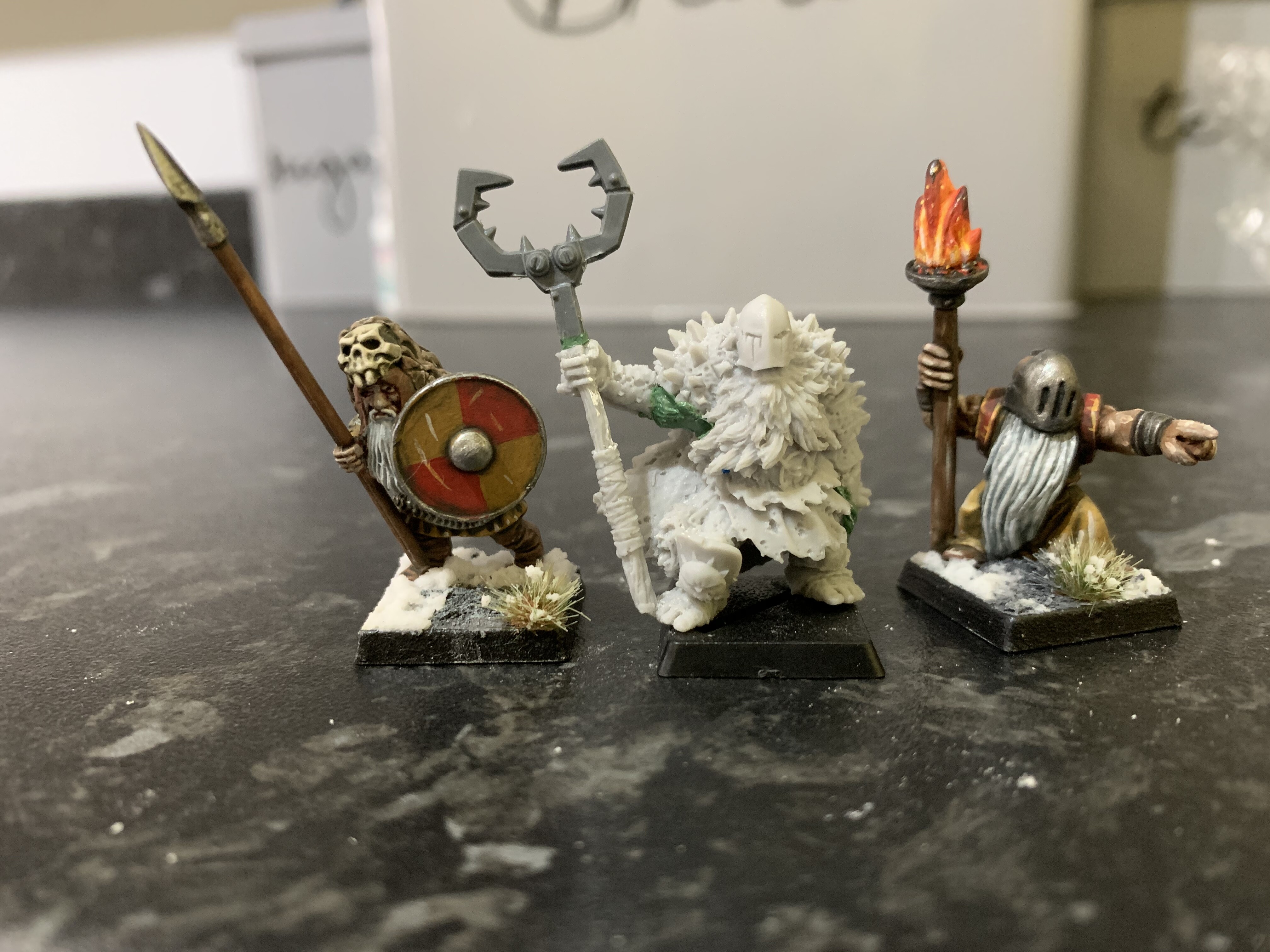 He is still massive! But I think he looks a bit more like a dwarf. I’ve given him a man catcher…for mordheim reasons…

Also he isn’t taller than the general now 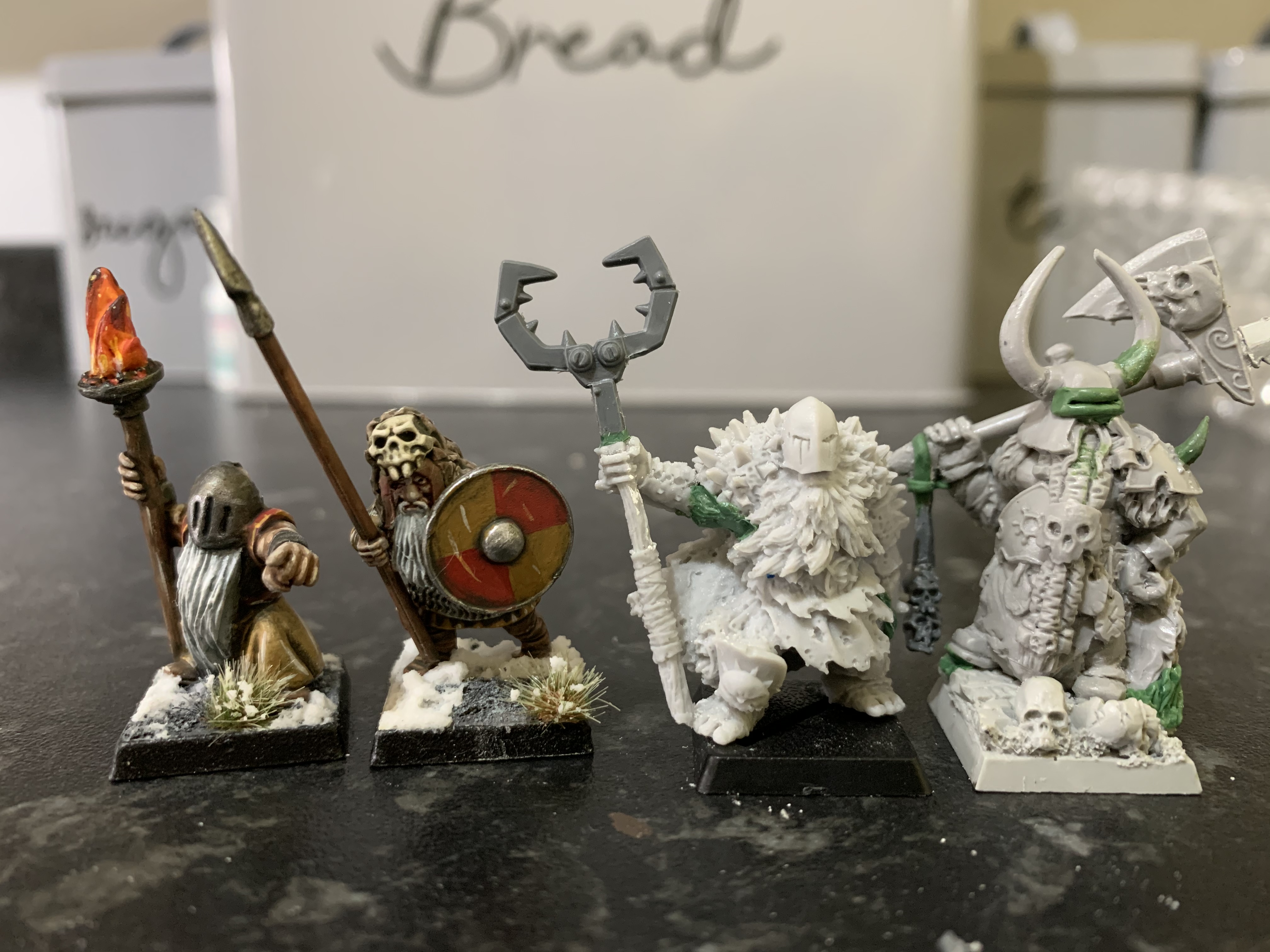