Kings Of War 2K Abyssal Dwarfs vs Kingdoms of Men

The last couple of months have been very poor from a modelling perspective, with most of my creative endeavors directed towards garage roof repairs, and other real life items. Oddly for what is one of the first times I can remember, I am spending more time gaming than modelling. My local gaming group has finally come out of a long 5yr hibernation and resumed monthly (soon to be bi-weekly) gaming sessions.

This report is the second outing I have had in the past couple months using my Red Queen’s Wardens. I have no photos from the first game, but it was 2.5K against 2 players on the other side. They played the game like two separate players rather than coordinating and as a result I took the win. It helps that in KoW Abyssal Dwarves are a very hardy army.

Below is a photo of the line-up at the start of the second game: 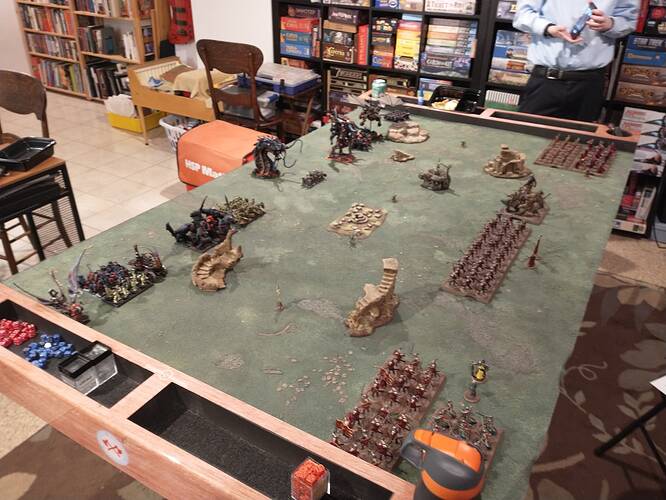 The units in green on this side are Gargoyles and Slave Orks (old Ikore Celtos fomorian models). Still need to finish basing, then will post pics. 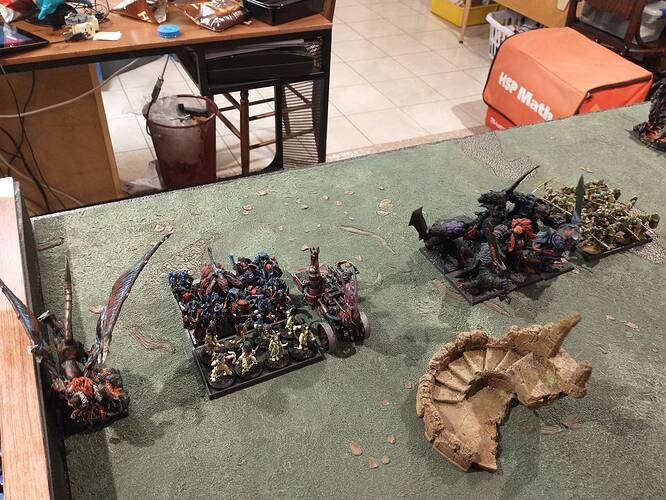 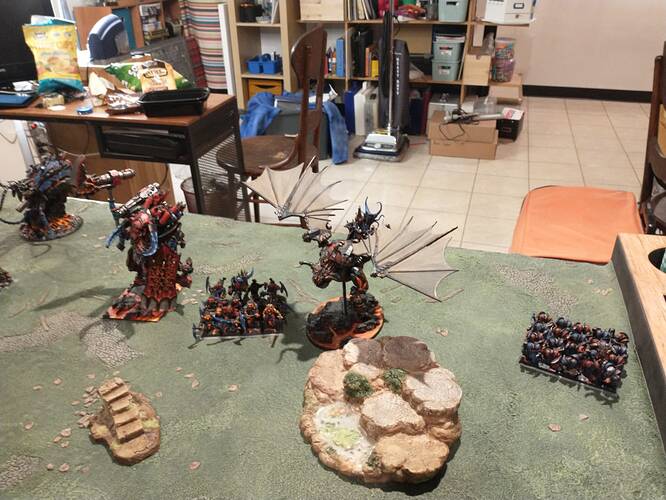 The game progressed very quickly and was finished through turn 4 in just over 2 hours. The two Titan’s clashed in the middle of the board while both his bear riders and my obsidian golems were able to run mostly unopposed in other locations on the board. From the get go this game was a complete bloodbath with each of us destroying unit for unit in quick succession: 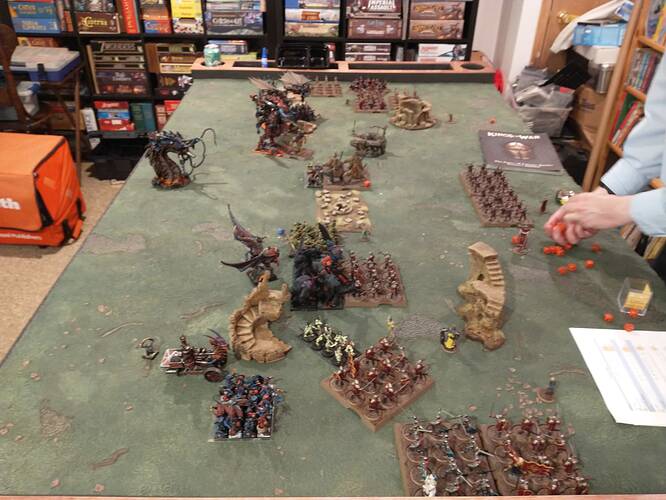 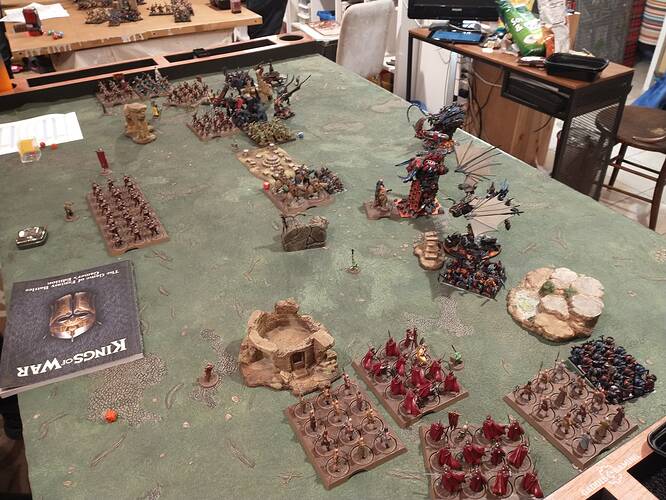 It took both my Hellfane (the Siege Giant/Infernal Golem model) and my Sorceress on Winged Abyssal to destroy his Giant, which meant I did not have time to pick up and remove the nearest objective marker. The Ankgor Heavy Morter proved a useless table ornament for this game doing zero hits to anything before it was destroyed in turn 3:

Meanwhile the Obsidian Golems made short work of several units while taking minimal damage on the right flank. The flame cannon also dealt heavy damage. I was skeptical that it would be useful due to the short range, but blocking his movement on the right flank allowed me to get it in range on a units flank which was devastating: 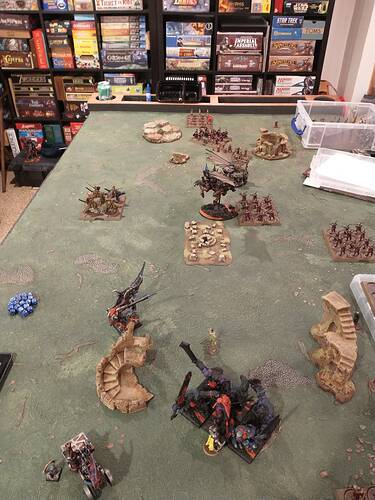 The final turn, he had six units left to my five, and four of the six objective markers (including the 2 with higher pts value in his possession to my two. This gave him the win by a small margin. I had cleared the right flank, but had no enemies in close range. He was close to clearing the left flank and had units in position to hit my flanks the next turn. I suspect had we time to play out the game that he would have destroyed both the units I had on that side of the board, while I would have spent the remaining turns just trying to get back into combat: 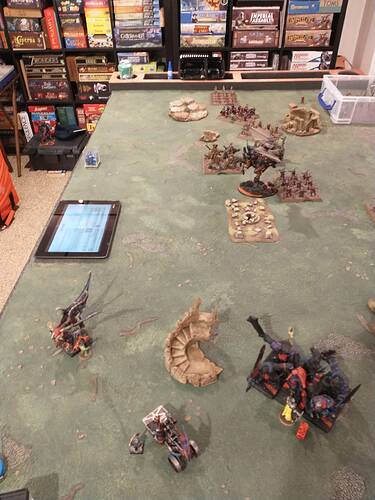 The game was so fast and deadly that it was a complete blast to play. The most fun I’ve had losing in a long time. A great learning experience. Definitely still learning how to maneuver with skill in this game. More to follow, as I have another game night coming up on the 11th. Cheers! JR

Love to see i-Kore minis getting an outing!

A huge fan of iKore models. I will also add a unit of Blood Reavers as Slave Orc cavalry in the near future. As I’ve no doubt demonstrated by now, my army builds are quite manufacturer eclectic. I have a substantial number of iKore celtos as well (picked up 60 models for $90 in an ebay auction several years ago). I intend to build (at some point in the next decade) and paint a full barbarian army with troops, missile, cavalry, chariots, catapults, and giants at some point using primarilly Celtos Gael, Heartbreaker Barbarians, Chronopia Firstborn/Sons of Kronos, and Grenadier collosal lords.

Chronopia sons of kronos still pretty cheap on the market based on what ive seen, at least in part because I havent hoovered up a couple hundred like I did with the blackbloods and dwarfs!

Lol… I’ll keep that in mind. I thought about using swamp goblins for my CD army. Their blowgun guys could stand in for Hobgobs archers. Have an upcoming unit made up of various Chronopia dwarves too…

Im painting up blowpipes to use as forest goblin archers in an orcs and gobs army. Theyre so small!

That’s the best quote of the day.
Always good to see some KoW battle reports, with the sole exception of Warhammer 5th edition, I think KoW is a better system than Warhammer in terms of balanced armies and smooth gameplay.
Thanks for sharing

Interesting, I don’t actually own any, but probably not the right size for hobgobs. Post em up when you have em done.

Just played again last night, so another briefer battle report incoming. The “useless table ornament” was only slightly more useful. Still trying to decide if I actually want to keep it in my list.