so far we are into 2h of discussion, because we are all fresh into this, we think thesafest way to go for start will be a supermario platformer style

jumping around, getting “superpowers” like spear throwing, extra hit point and stuff, changing his sprite when getting different powers (maybe a half naked hobbo in the start, then full warrior/archer/gits/hero while progressing)
facing many bosses at the end of the levels, like lammasu

astragoth, in a Metal Slug Boss fight style (Instead of the HEAVY MACHINEGUN! we might hear BLUNDERBUSS GUN!

but yeah, so far we are just throwing ideas around, but the platformer seems the easiest of all so far

Very nice starting idea. I look forward to whatever you cook up.

One of the best games I have ever played, is the point-clicker Pyramid: Challenge of the Pharaoh’s Dream (1996). It let you do a ton of things, learn a lot about ancient Egypt, and it was all centered around the building of the great pyramid. You got to find the north star, feed workers, manage stone transport on the ramps, play boardgames, pull out the dead ruler’s brain through his nose and a slew of fun stuff. @Antenor and @Oxymandias may possibly be interested in the above link (notifying you on the off-chance), though watching videos sure isn’t the same as actually playing this gem.

Something like Pyramid, centered around the building of a megalomaniacal monument to some theocrat’s glory or to the dark father, would be absolutely splendid. Not the first game to tackle, but if you get your appetite up for more, then I strongly recommend watching through it (and better yet download the game files if possible, though I have no knowledge of emulators and so on) and see if a CD version of the Pyramid could be attempted. I would gladly help come up with ideas, write stuff and so on, and in fact we could involve all manner of writers and artists around here if such an ambitious project ever was attempted.

It would be good to limit such a dream project in scope compared to Pyramid to not become overwhelmed. Or perhaps divide it into several independent games. But this is all dreams for later. Fingers crossed, and may Hashut guide your path.

Now you have my attention.

Sounds great. If you can think of a way to utilise a chaos dwarf running around with a blunderbuss splattering elves or slaves it would be very much fun.

Mario or dr robotnik as the hero? ( both chaos dwarfy)

Hashut bless the Italians!
In the original mario games I believe there was something that made mario rather large for a short period, could you do something like this where the Hobgob powers up into a black orc? - If you wanted too anyways, just an idea.

Whatever you come up with, I can’t wait to play it.

I was thinking more of a temporary power up like metal slug. A sort of ammo system, so you get now and arrow, throwing spears, a wolf mount, idk, something of sort similar to metal slug, while moving forward on the screen.
But yeah, something with appearance change!

But that is for the future, first we have to build the logic xD

Has anyone ever played the Homestarrunner game Peasant’s Quest? Good ol days of flash… I could see that hybrid text adventure format working well with a Hobgob git lurkin around making mischief.

1st small update. We are toying a bit replicating a sort of Mario logic for the horizontal levels, hotboxes and all.

Tonight we will discuss on the lil progress and more on the logic.
I will start and try some pixel art for it.
Gotta find the right style, I don’t wanna it too complex due to time management, but still wanna it being recogniseble as an hobgoblin.

The main feature I wanna apply is the possibility, like in metal slug, to find weapons, here being the same idea of power up: bows, spears, sword and shield acting like a ammo/durability system, AND an extra life like for mario with his mushroom

If you get hit, you drop your weapons basically.

What would you like to see? Any wild suggestion?

WE ARE TOTALLY INEXPERIENCED AND UNQUALIFIED, keep it in mind

You could have a kill -streak counter and when it hits max you become an invincible wolf rider and rampage forwards, but only for 15 seconds or so.

Well we cant go past “The Black Hammer of Hashut” 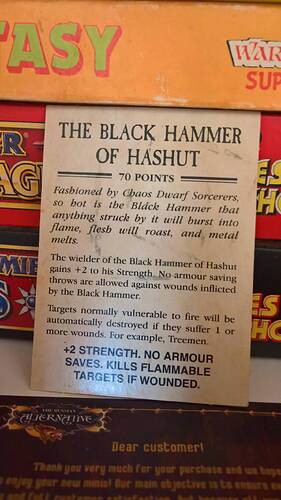 My favourite from back then is still the Earthshaker rule that halved movement of what it hit as ground shook around them, mwhahaha

Well now I’m not one for pier pressure but…

I think we’d all love to read that

I bowed to the peer pressure and wrote a scene in the stories subforum. Does that make you a bad influence?

Off to the subforum I go