Amazing stuff, with your incredible painting skills too this one is going look great

Scrapped together a lobster themed daemon engine palanquin for my sorcerer conversion. A lot of leftover ideas and inspiration from the recent nautical Golden Hat. Finally had a use for one of the two itty bitty steam whistles I made a long time ago.

Also had a crack at a hybrid base to meld my steampunk and lava basing together (lavapunk?). Will probably have to do this to some other units to tie my army together, especially if this palanquin ends up marching alongside an infantry unit. Guessing I’ll need to smash up a few more kitchen timers before this army is complete. 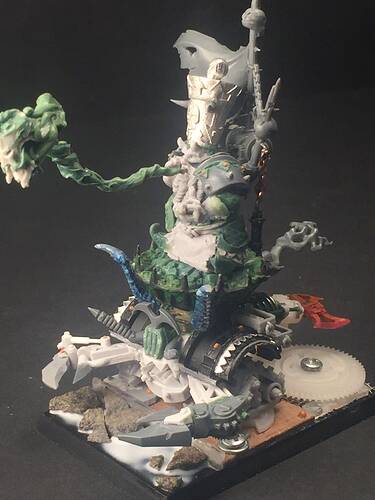 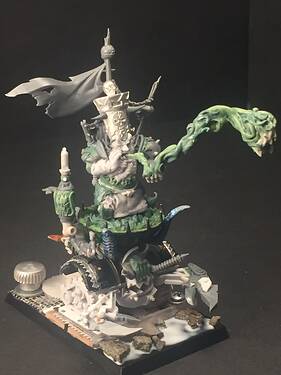 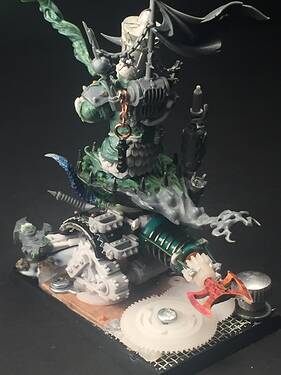 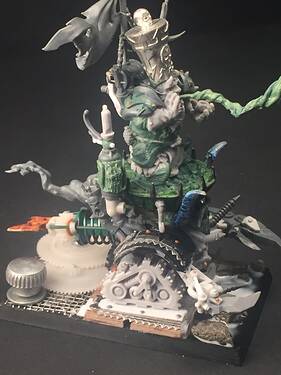 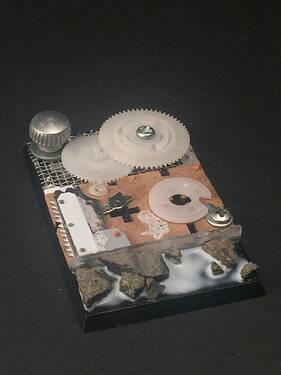 Another astounding conversion. I found myself expecting legs after reading the description, but the treads definitely work. Interesting base idea. Really need t see it painted I think to get the full gist.

Legs were definitely in consideration but overall I like the sturdiness and perceived stability of the treads for a mobile platform. Also have other legged creations coming down the pipeline that claimed some bits. But more on that later… I’m never quite sure if I consciously make those decisions or just post justify them after going down converting tangents.

I’m not completely sold on the base either. For now he’s just pinned so I can bail down the road.
Also totally snagged the cable pull actuation idea from your submersible.

Well exceuted! I missed that on the initial pass and had to take a second look

I was cleaning and sorting my bits boxes recently and got distracted thinking about potential uses for some bits that have been kicking around for a while. Apparently I’m just trying to run the gambit on steampunk sea creature creations. I don’t exactly know what these will end up being used for, likely some troop filler once my infantry arrives, treating them as minor bound daemons housed within a daemonsmith’s mechanical tinker toys.

The extra K’daai bits seemed like a good starting point for jellyfish, just zapped them with a heat gun to give them some shape. These tiny builds are probably where I have the most fun. The shark creature is from Wargame Exclusive with only a few slight modifications. 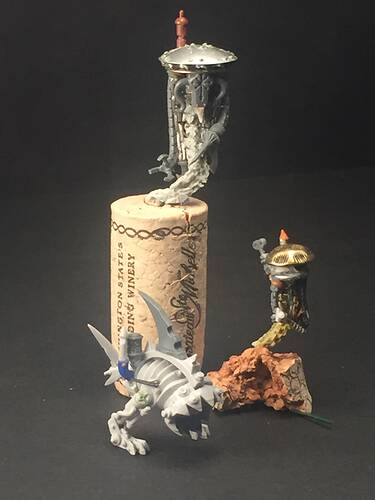 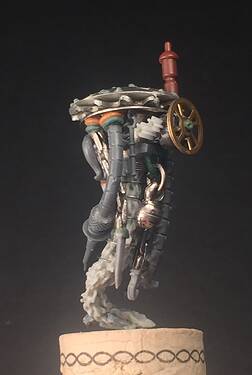 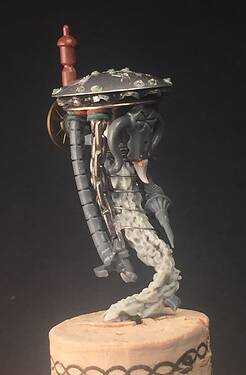 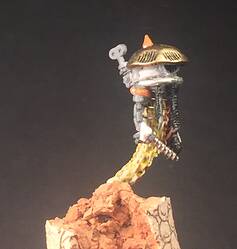 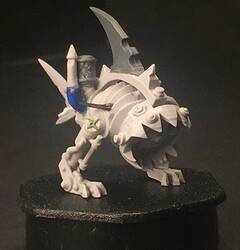 This is hilarious and ingenious. I love your thematic. A very unique army yet so perfectly Chaos Dwarf.

That 90% estimate from the previous Skullkraken post may not have been very accurate in the sense of time. I did manage to whip through the painting on the crew amidst the meditative repetition of applying rivets. Of course I found more places that needed bits in the process. I also may or may not have started another EVEN LARGER endeavor. Hopefully I can get it to a stage worthy of posting teaser WIPs soon. 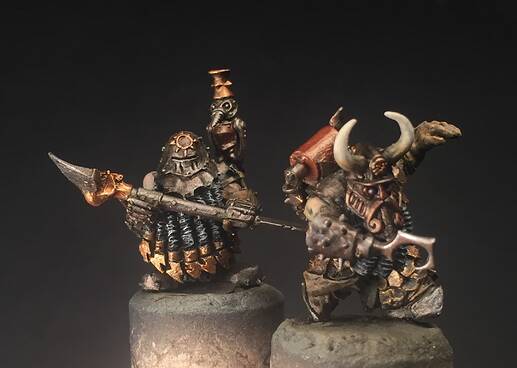 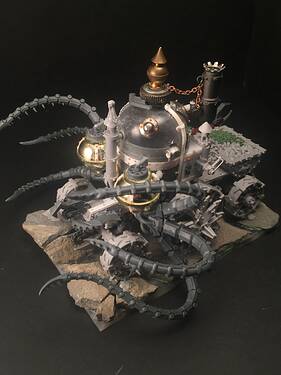 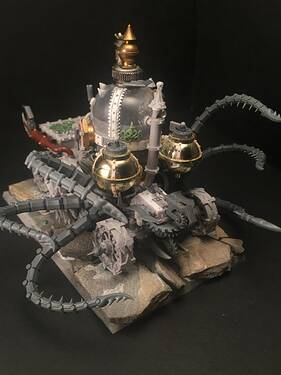 image2448×3264 1.8 MB
Polished the kitbash off with a Reavers/skull/kraken insignia mashup. Overall not a whole lot of change but mostly just wanted to document the final WIP stage before priming. 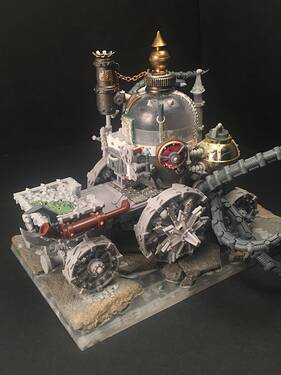 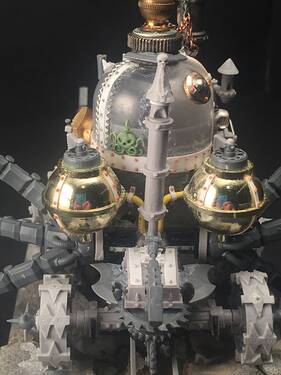 Cross dr octopuss with a submergible vehicle/tank and thats what you’ve built. Very nice. You bits box must be huge. I rarely recognise the bits you use to create your army

Thanks a bunch, my bits collection has certainly amassed over the years. Had the good fortune to act as an ebay seller for several friends looking to pawn off their leftover bits including Skaven, 40k orks, dark eldar, imperial guard tanks, etc. My commission was mostly just keeping the pieces I wanted. During that time did a fair amount of buying and reselling to get my money back but pocket the cool parts.

I end up at some amalgamation of admech tubes, dark eldar spikeys, 40k ork blades/claws, chaos space marines, fantasy chaos, and chaos dwarfs. Spattered with Kharadron and a host of Mage Knight Black Powder Rebels I’m still patting 4th grade me on the back for having the foresight to collect ad nauseam.

Love the Kraken insignia, really finishes off the piece nicely. Really looking forward to seeing it painted. Well done. Over the years, my bits box has become a large bit’s bin. Sadly I have slowly depleted my GW bits as myself and my dwindling gaming group have moved away from GW games. I find myself using more random household stuff, chopped up zoid pieces, legos, random action figure parts, etc. Still pick up the occasional genuine GW bit when the conversion calls for it. Need to do some organizing… always.

A welcome distraction arrived in the mail after 90ish days! These models are fantastic (especially the remastered “harquebuses” kit), been getting them cleaned up and ready for assembly and converting. I think I’ll go for units of blunderbuss warriors, infernal guard with fireglaives, and immortals. 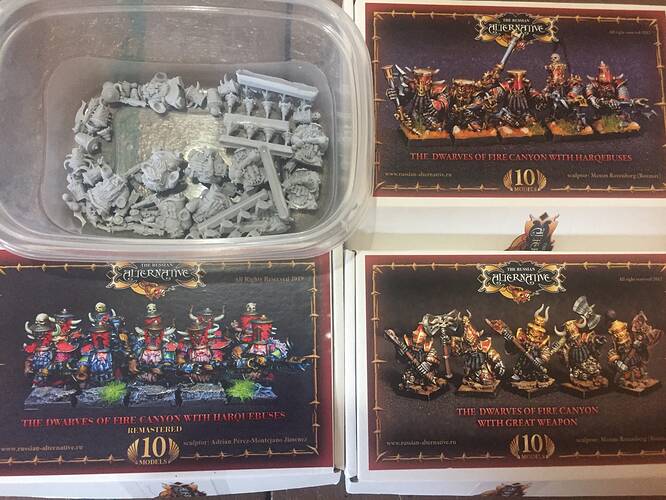 Ouch, they took some time…
How do you fint the digital sculpts vs the hand sculpted models? And how would you rate the resin?

Nice one , so a bunch of masterfully painted units ( probably converted with additional clockwork stuff added) incoming shortly then.

I must admit i try to avoid resin as much as i can. Metal seems forever ( could be endlessly painted and stripped) resin is a one attempt at painting and then careful handling ever after as a knocks seem to shatter stuff. The models fo look cool though…

I look forward to seeing it all painted : )

TLDR: I’d certainly recommend any of these kits

The resin seems to be of better quality than I’m used to, or maybe it’s just better quality control compared to Forgeworld. Very little processing required and none of the ugly bubbles, mold mismatch, & flashing I’ve grown to “cherish”

from the paragon of wargaming miniatures… Only one or two of the 60 minis (ordered some for a friend as well) had anything noteworthy to clean up, other than that just a quick clip & scrape. Although I do agree and find there’s something unparalleled about having nice metal models on the table.

As far as digital vs hand sculpt… that’s tough to answer. There’s some noticeable added uniformity between the digital models (armor patterns, beards, etc). Detail on the digital sculpts is a bit shallower but crisp and clean while the hand sculpts have deeper details but grittier. Not entirely sure I’m finding useful words but those are some of my passing thoughts. The slight uniformity is one of the reasons I plan to use the digital ones as basic chaos dwarf warriors.

The remastered harquebuses is my favorite kit for the variety of bits including blunderbuss options, but individually speaking the older harquebuses kit has some of the most characterful helmeted/masked head options I’ve seen and awesome variety in the weapons themselves. Very piratey and exactly what I want in an infernal guard unit. The great weapon unit will hopefully make some big hatted imposing immortals, although will require the most converting since I think I’d prefer them with shield & hand weapon. (I thought these were a better starting model for immortals than the Russian Alt’s basic warriors kit)

I dunno about “shortly” haha, but I’ll try to live up to everything else. I’m in the process of trying to figure out 3D printing some magnetized movement trays and bases to rank these up nicely.

Had to get this guy off my desk before mass infantry assembly begins. Overall happy with how the kitbash came together with some paint on it. I definitely spent wayyyy more time building this guy than painting. 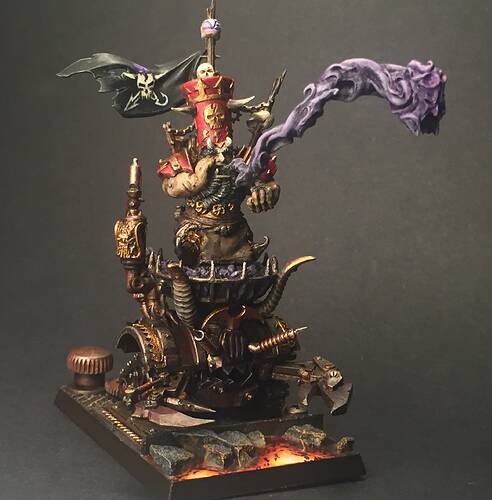 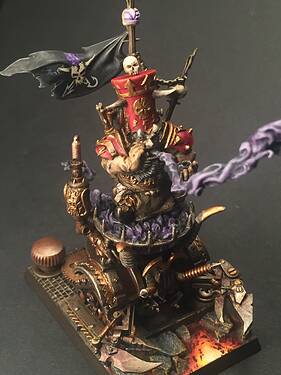 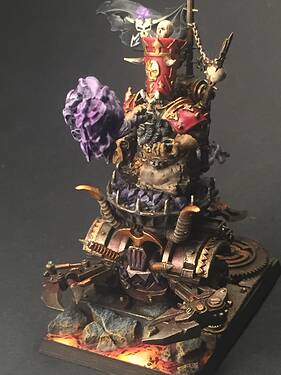 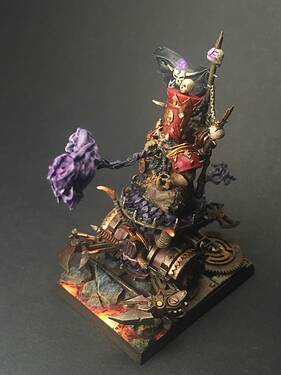 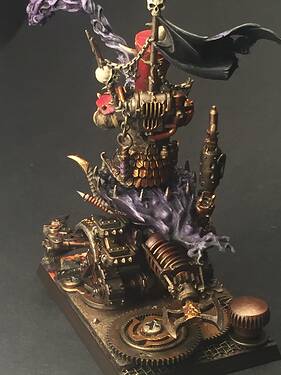