What an amazing build. Such a big project, yet so much love put into the small details, I’m sure I’ll find something new each time I look at it. Beautiful sculpting work on the octopus parts. A well deserved victory indeed!

Absolutely fantastic. Such detail, such loving care and an asscannon! Awesome.

This guy is awesome, such a cool little touch I did not notice at first, I see that a lot on your projects that I notice things on the 3rd/4th views

Superb. I hate you

I’ll never be able to even picture such thing xD

It’s the level of planning @Loidrial

I think you, like me, are a more chaotic creature than @Reaver

He has this mad ability to think of something, write it down, and then do it.

@Loidrial , @Oxymandias almost as if it’s his job to make something from an concept or plan

I’d say there’s a fair amount bit searching to align with a vision, writing down the notional uses for the bits, realizing part way through there’s no Hashut-damned place for your daemonsmith to stand despite the giant base, reacting to the poor planning, and then greebling my way across the finish line.

Steampunk greebling is a passion at this point. Although I’d say the most enjoyable part (And I think @Loidrial can appreciate from his trash builds) is having the bits box and the trash box side by side and rifling through it at the onset of a build and finding new uses for stuff that has sat unused or could’ve easily been tossed in the bin. Just as good as Christmas.

I hope to document a bit better my Walhut tribute, coming soon to a nautical blog near you. Now that Michael has made official his new hobby of sabotaging my BATG with great ideas.

i can drop the mask and reveal it to everyone.
i’m just an orc in disguise with borrowed curly beard @MichaelX @Oxymandias
BEHOLD CHAOS DWORKS!

Excellent work as ever. And the phrasing is no accident.

But even the best hobby projects consist a lot of reacting to mess-ups and fixing unforeseen problems. Cover it in detail to hide stuff, technical or decoration, it matters not. Ramping up the amount of detail hides faulty areas and makes people think it’s some kind of next-level creation. When in fact the basic shape is wonky, or the proportions are dodgy. Been there, done that.

It fills me with joy to see a horseshoe crab sculpted, and sculpted so well at that.

Thanks Admiral! I have no idea why when I needed something to elevate one foot of my crewdwarf, my brain leapt to horseshoe crab. It was fun to sculpt, so I made a second one to be not so trod upon.

My not so secret steampunk sawce!

I should be glad the latest contest is Hobgob and not Lamassu themed. Otherwise I would’ve spent a walrus weights worth of green stuff and time on some Dornian Heresy level well… Heresy! As it stands the true coming of Walhut will be slated for future Oathbreaking.

Rorrhak the Accursed, emissary for The Great Unification, sent to @delgdeathaxe

Thanks @MichaelX for setting up this momentous event in Dawi-Zharr history.

Only real converting effort here was to add Reel the steam shrimp. 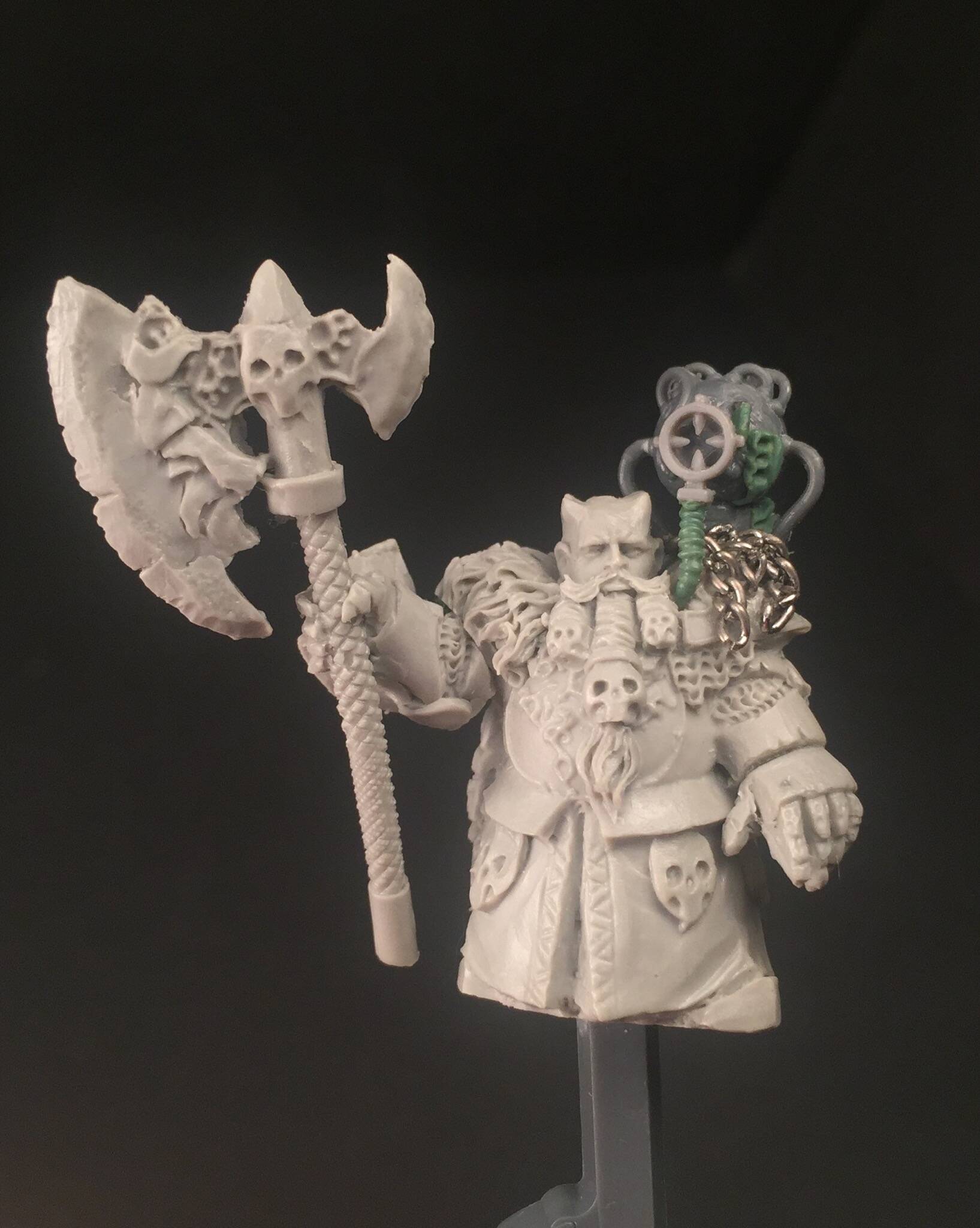 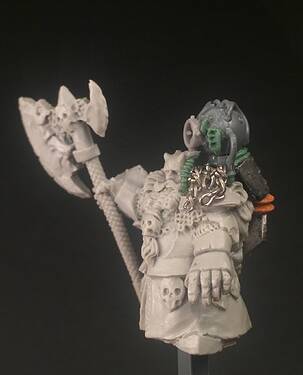 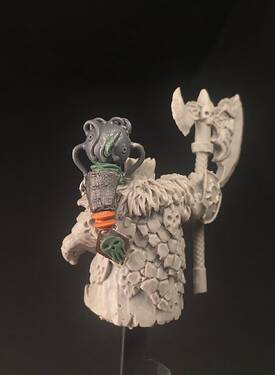 One of the few models (ever) that I am happy to look at a close up picture of the face. Greatly inspired by some of @GhraskDragh grimdark CDs, my riff on it anyway, done with @warcolours paints and the aid of translucent violet and translucent flesh with long working time (desperately needed). I’ll add his lore passage below with many o’ Reaver easter eggs and a callout to his cracked face. 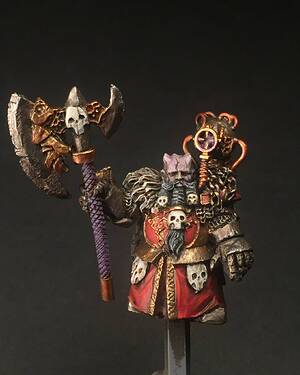 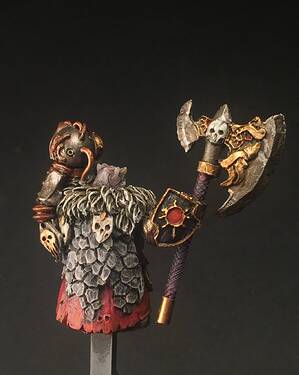 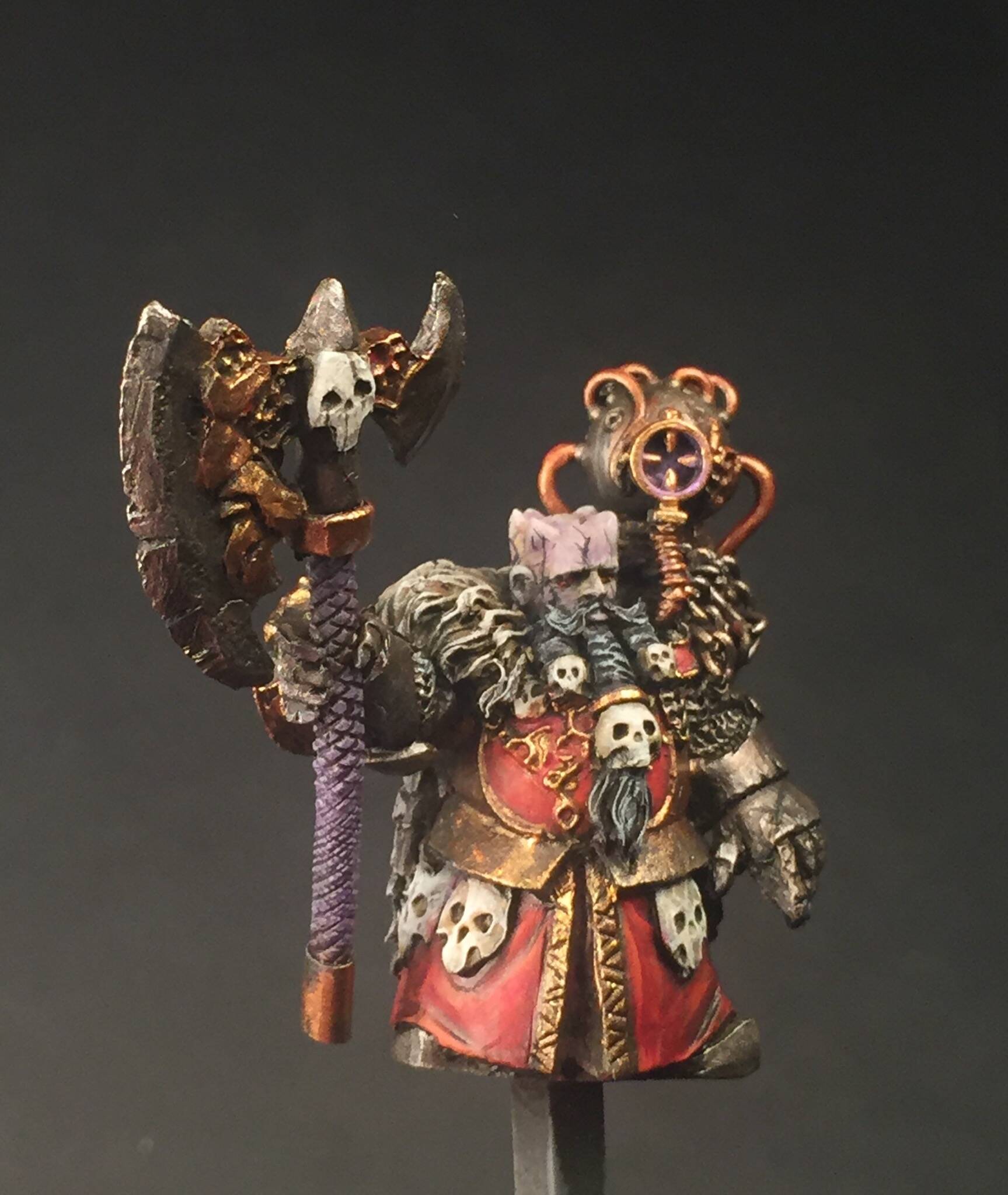 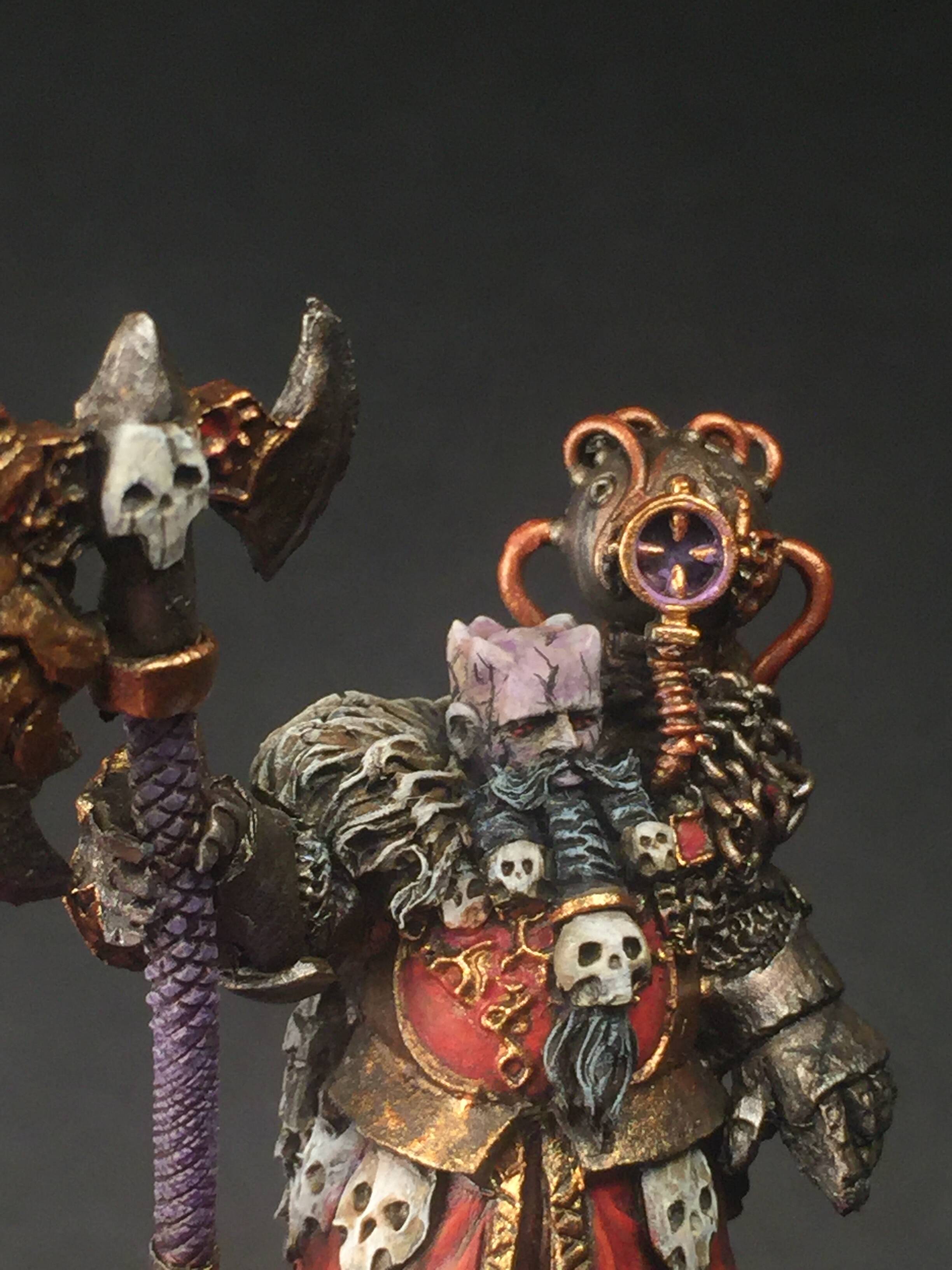 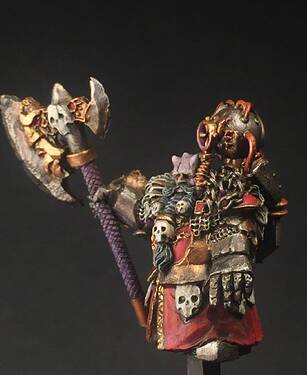 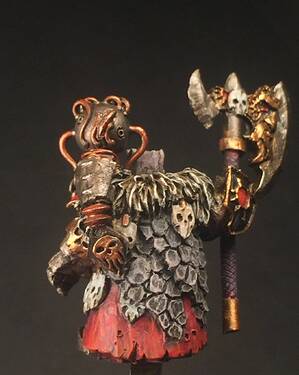 Rorrhak’s ironclad warship lay at anchor, assigned to coastal patrol near the Dark Lands. A summons had been received by the Grand Admiral of the Ironclad Fleet to provide an emissary for the Great Unification. With the wayward, elusive Grand Admiral off at sea, the onus was on Rorrhak to represent the Ironclad Fleet. As the captain nearest the Dark Lands, a daemonic familiar, Reel, arrived instructing Rorrhak to make his way landward and meet with Xrakir of House Xander….

He had witnessed the Grand admiral shrug off many similar requests, feeding each letter to his nearest familiar (often an odd tottering brazier with feet) in a belch of violet flame and returning to pour over his map-table without hesitation. For this particular summons to be considered with all seriousness, it must be of dire import, however Rorrhak had a sneaking suspicion the Grand Admiral had found something in this missive that aligned with his overarching goals of plunder and conquest.

Wading through the confusion of hobgoblins on deck he barked orders to prepare a landing craft to go ashore. The waters were oddly calm on this portentous day, and the encouragement of a whip brought the small party to land with haste. When the water was less than one hat deep two hobgoblins were shoved out of the boat to secure it at a stone mooring. As Rorrhak stepped onto the pier, Xrakir and his iron-helmed retinue were clearly discernable amongst the rabble at the small resupply camp. Despite their stoic and uniform appearance one could still detect an air of impatience.

After gruff discourse, a pact was signed and Xrakir boarded the landing craft. He would be shipped off to eventually convene with the Grand Admiral and serve at his side. Only the tumultuous tides know what his fate holds from this day forward. As for Rorrhak, his task loomed ahead of him. The Great Unification was not yet complete…

Day 1:
Since departing, this obnoxious familiar has not left my side. I have no doubt it will accompany me for the duration of the journey and enact the will of its master should my path wander. Never sleeping, never wavering, ever vigilant from within the glowing socket of its sizzling metal vessel. Only brazen fools steer against the currents of the Grand Admiral, as he has always led the Reavers to fortune and infamy.

Day 4:
Such a lengthy forced march over land best not be all for some idle palaver. I’d rather be eaten and digested by that hideous tentacled creature the daemonsmiths were attempting to engineer as a replacement for the prow cannons. Errant maniacs, I can only hope they work that daemon to death before I return… If I return…

Day 11:
The sorcerous energy from this daemonic familiar seems to punish even the mildest of insubordinate banter or criticism of the task to which I’ve been assigned. One member of my retinue was turned to stone overnight, his face cracked in two. Was this due to his outburst of complaints over our thankless mission? Perhaps the Grand Admiral sought to use the stone curse to set an example, or is this purely the will of Hashut.

I hardly even dare to think. Perhaps it can even read the echoes of my very own thoughts?

Day 14:
We have nearly arrived at our destination; I pray to the Dark Father we don’t find a shiver of sharks lying in wait. It is mightily unusual for the landlubber brethren to trust the vagrant and erratic Reavers of Uzkulak.

Love it, such a cool mini a real treat to have as an Emissary.

Dawi Zharr measuring depth in hats is a wonderful touch. @Fuggit_Khan may approve of this.

Doubtlessly there would be a Parliament of Daemonsmiths dedicated to the study of metrology, developing their own Hashut Harmonized System of Units.

Took a long time for this to come full circle. Looking forward to the next emissary exchanges and the 'round the world sculptapaloozathon

Behold some not very exciting and altogether far too time consuming unit filler for a surprise infantry regiment I’m working toward, a retinue to accompany my recent emissary from @Xander … More to come in the near future, pending a bit of international shipping.

I’d like to say this was all just as planned… but… In the process of acquiring some gnoblar bits that will end up in my Walhut Heresy project… The other ogre bits used here just came along for the ride, and I’m happy they did. 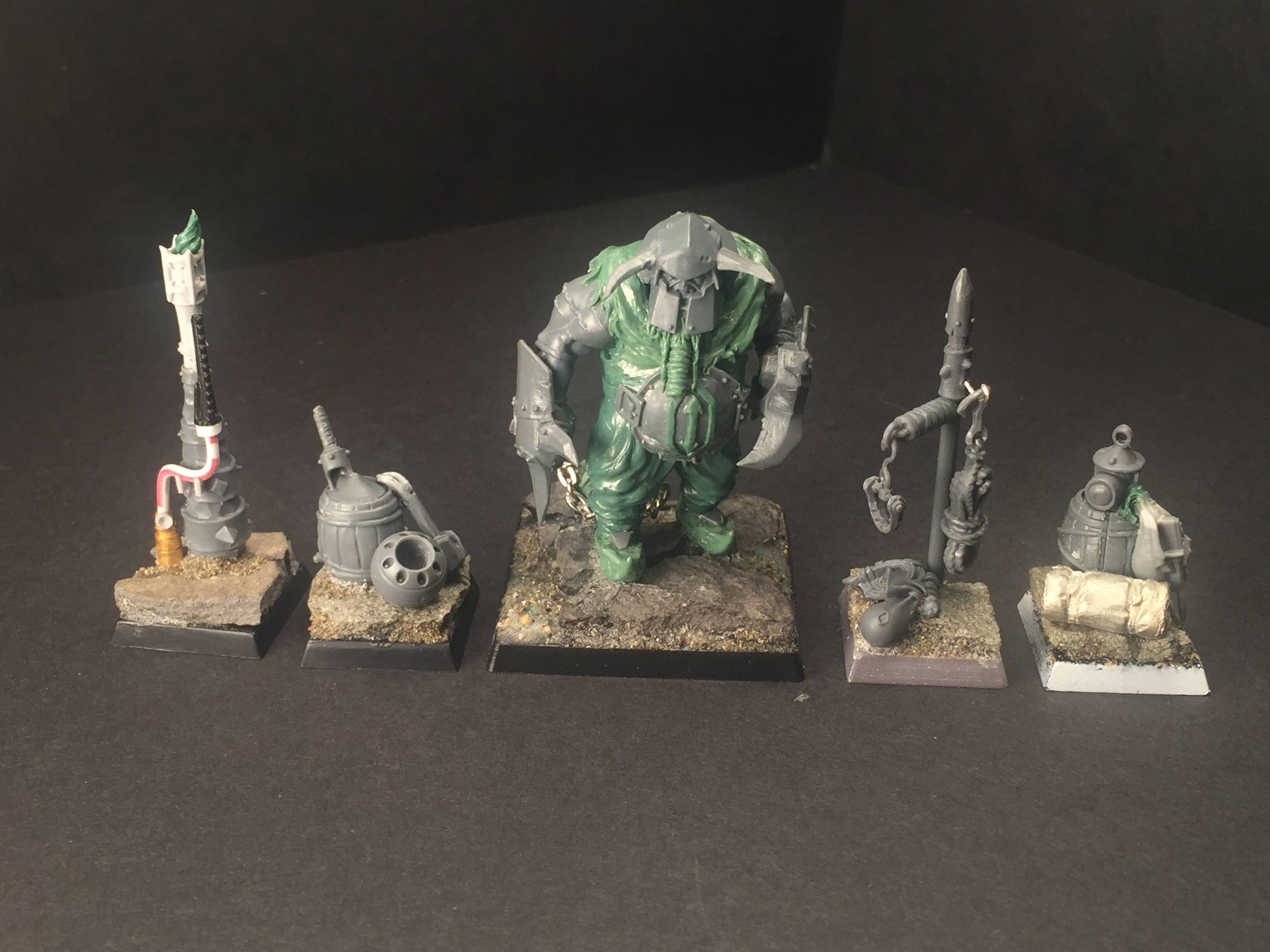 Started off making a few bases of camp supplies. The barrel with scoop was an absolute must-use piece that I reveled upon finding it buried in the bits bag.

Also note the use of rope doing regular rope things @chitzkoi … Being stored for future survival situations that require legitimate use of rope: Lashing gear together, towing equipment, setting up shelters, rappelling down your Ziggurat to clean off all the elven blood, heavy duty clothes line for hanging up (dangerously heavy @Oxymandias ) trousers and undertrousers. It’s amazing how useful rope can be, best not to squander it. 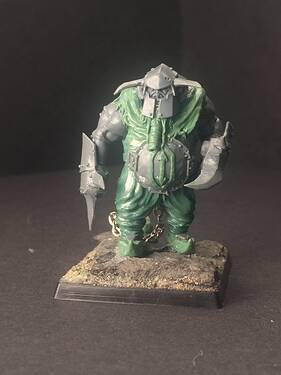 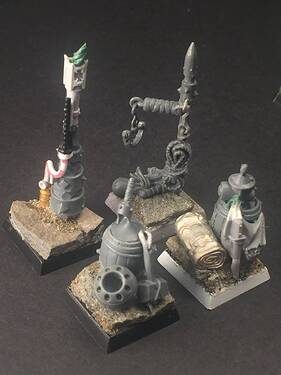 This slave ogre was a long process for me. Started off as just arms, head, and wireframe. Lucky to have scored one of the helmed heads we just saw appear in the Artisans Contest entry by @Iceman . Slapped the gutplate (with slave rune that @Antenor spotted straight away) on when the belly was suitably rotund. Had to do some thumb surgery since I only had left hands. As has been the recent theme on CDO, I like how he looks from the rear with his chain weight. Not perfect but hopefully some paint will make up the difference. It was good practice and I think he’ll fit in the unit nicely. 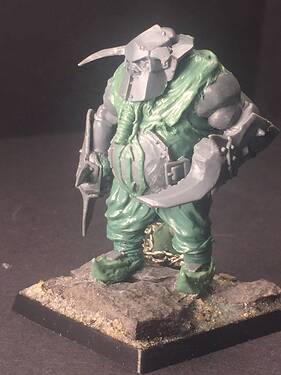 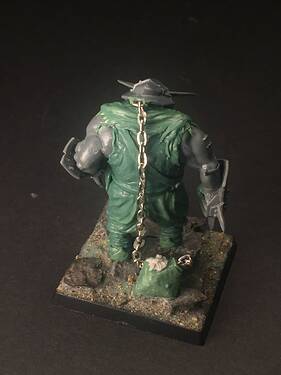 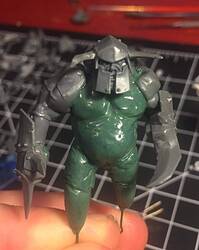