Ran out of stuff to paint at home so had time to translate a scribbly piece of loose leaf into a page in my lore book. Hopefully this gives me some motivation to finish painting the titular warmachine. 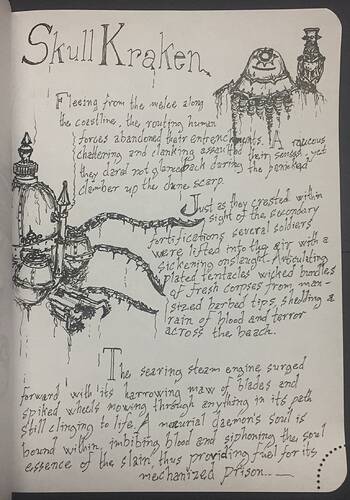 Sometimes it takes a while to get the motivation to proceed. Still have to paint up the CD pirate force for my Nautiloid Sub, and the crew to my dragon cannon built several years ago. Somehow I never get to laying paint on those.

Fosche syndrome hits hard with completed big kitbashes sometimes. I’ll be sitting there forgetting that one actually has to move the paintbrush around for anything to change.

Cleaning my phone today realized these sketches inspired by @chitzkoi ATWD stories never made an appearance here. Mostly including them for the sake of completeness. Definitely will need to revisit the sketchbook when I read some of the newer segments. 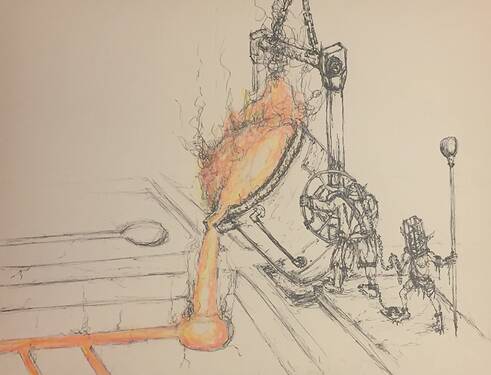 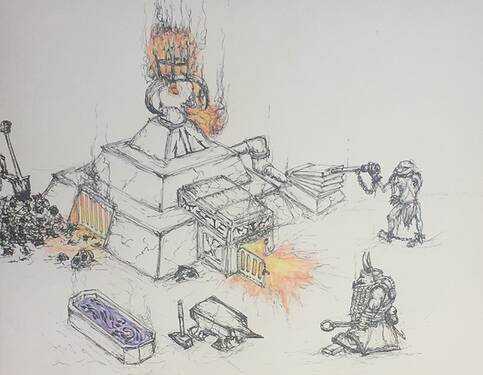 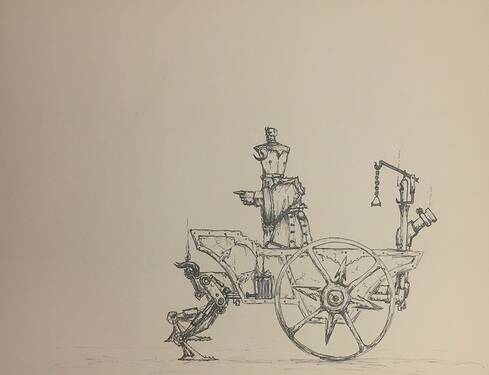 Since I already have a siege giant, Golden Hat XXXVI was the perfect chance to try something different. Thankfully the idea generation phase took all of about 30 seconds of scrolling through the previous giant themed Artisan’s Contest where @Loidrial left wonderfully evocative concept art just sitting there for somebody to pick up.

During a Scibor sale I split this kit of berserkers with a buddy. I ended up with just these two that were a little too aesthetically different and scale different to fit in other units, despite my lore-splaining trying to convince myself to use them. I was happy to use the Scibor minis here since the slightly larger size could imply that they are expanding to their (perhaps even giant sized) final spectral form. Aside from being inspired by the giant Artisan’s Contest this was the only additional rationale I had for entering in the giant Golden Hat. 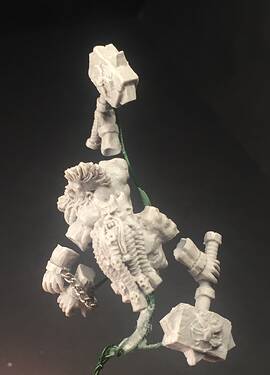 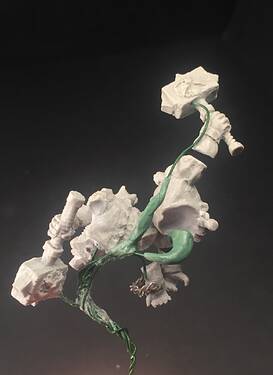 First thing I did was head straight to the Dremel tool with these neglected minis, they’d been in the grey pile too long and it was time to knock out two in one go! Surgery removed the legs and saved them for a later date in which I can hopefully create something slightly more in-scale with other CD minis. Luckily the loose hand bits already had the bracelets to match Eddy’s art. I just had to cut the arm near the elbow and attach the forearm to the hand, hollowing out the joints a bit with the dremel to create the gaps.

These originally dual wield hammers but I liked the idea that these two Djinn were chained together and crammed into a single amphora. I drilled out the hammer handles from a pair of hands and chained them together which helped declutter the model a bit and made me think these brothers were imprisoned to eternally serve based on some slight against a sorcerer during their living years.

Most difficult part was getting a wireframe to match the pose I wanted and still leave the gaps matching the reference art. I decided to lean into the spirity Djinniness when needed but tried to exercise clever attachments like the corner of the hammer to minimize the extra spirit weaving I’d need. This took a lot of time, wire, and baking soda glued to my hand to accomplish. Unfortunately got a small infection in my finger from stabbing myself with wire. Green stuffing helped to confirm the pose I landed on had good negative space. 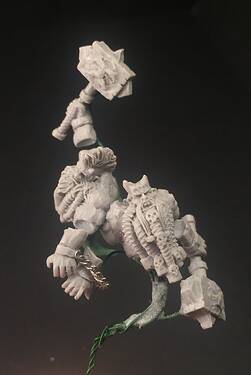 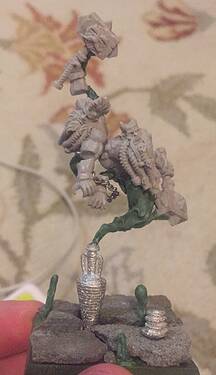 Since I didn’t want to add a scale reference dwarf like the reference art I ended up going for the ceramic amphora being stabbed into a crevice as if they are summoned in some magmic invocation. The base was somewhat plain still which resulted in the idea of the lava rising up due to the summoning perhaps to imbue their lava hammers with power. 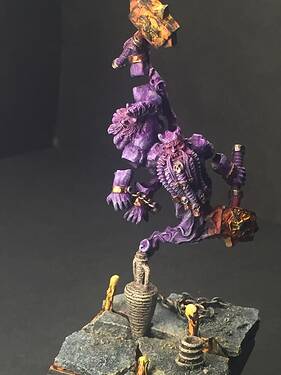 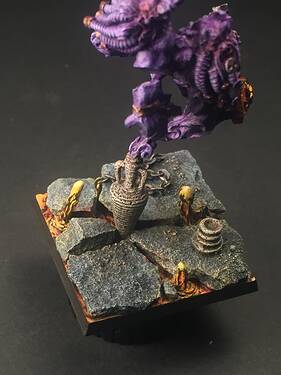 Not much to comment on painting really. A lot of Warcolours transparent violet pushed around and a couple of bright metals to make the bracelets and beard ornaments pop. Long winded description of a fun build… If I had to guess, these will be very fitting as troop filler for my unit of immortals… but more on that later… 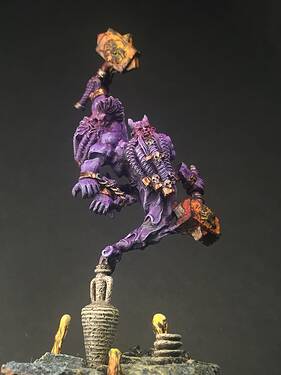 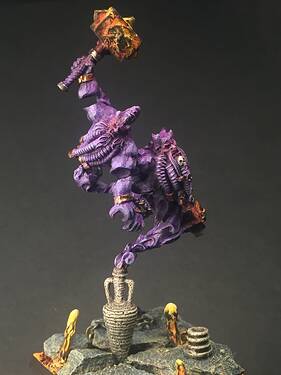 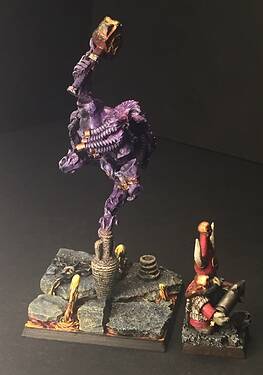 Love seeing the WIP here, the void space in these makes them look really cool, would love to see a pic for scale, I know there are some on the base but next to a mini would be great.
Also love the outside take on the comp

All of this is fantastic man! I cannot believe that my work inspired someone to create something on his own!
It’s really awesome! The feeling is right, the conversions are right, the color is spot on.

I’m so happy that such great unit filler could take form!
Truly deserved podium too

Thanks Eddy! Glad to have done some justice to it. Now the rest of the unit just needs to live up to it!

And that’s why I asked, love how it looms over that guy, nice work mate

Or maybe get sucked in head 1st, beside a sorcerer gleefully casting a spell to trap them

Haha! I do have another ceramic left! 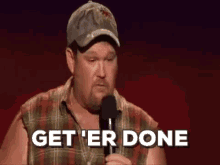 Wonderful! Magnificent build. The amphora and base are marvellous touches as well. Such a good iteration of @Loidrial 's concept art!

Also, @warcolours check out your paints in action.

Beautifully painted and very well executed conversion that catches the eye and pulls you in with a Keanu “whoa”. I struggled a bit to see this in the position of a giant except as a counts as, but a very striking model nonetheless. Now if you’d done this with 7 or 8 more berzerkers in the same style all attached to form limbs a body an head… all still coming out of the amphora… (an idea for your next model)…

I agree, I don’t think it ever was headed in that direction to be honest (not even as a counts as since I didn’t base it accordingly). Being based on Eddy’s art was my main grounds for submission. Now your idea, would be much more… well… giant!

I loved the Brothers Djinn! The great thing about CDs in my opinion is the freedom to have fun with them. These are certainly fun finished to a high degree. Great t o see.