One of the core issues with Chaos Dwarfs RH in the modern age is the lack of options compared to later lists. How can I use my classics with their crossbows? What if I want an Iron Daemon? Why would a dwarf not use some form of polearm when they are at such a reach disadvantage?

It turns out our friends-for-gold have a surprising amount of utility that can be used to field equipment not envisaged when RH was originally published. Here’s some examples ripe for converting, but please add more if you have ideas!

And many thanks to Thom Thumb and @Ihsan997 for many of these great ideas!

Remember also that Pizarro’s Lost Legion is a rare Mixed Formation, crossbows in front and pikes behind, covering both of the above!

The other point to note is that RoRs come with a minor character. There is some excellent opportunities for new models and conversions there, however you do pay a premium for them in points. Additionally, RoR can’t be taken repeatedly so you are limited to a single unit of that weapon choice without branching into DoW or alternative RoR entries.

I like this. Coming up with unique CD replacements for the RoR including characters sounds like a fun contest theme.

For crossbows: you could also take dwarfs and equip them with crossbows and heavy armour. You have to live with a hatred for orcs and goblins special rule though. Forgot that chaos dwarfs cannot enlist dwarfs.

Pikes would be indeed quite flavourful for more historically inspired CDs. Slingers could be proxied by duellists with throwing knives or pistols. I would also love to have chariots but that seems a bit tough, at least if you want to have chariot rules.

wherever the hell the Kathleen Halftank came from

Another reason why I’m so excited for the @oldschoolminis Kickstarter.

Thanks for getting this started, man. I’ve thought of a number of thematic and flavorful answers…I’m not a person to ask about statistics, rules, or balance, but I quite enjoy the thematic side of things.

Foremost on my mind is T3 for many of the units. I got to thinking about possibilities for imagining the balance (and thematics are all about imagining):

Do any of the above seem plausible purely in an aesthetics and lore sense?

I would just ignore the bit that says that CDs can’t take Dwarf units and get crossbows from there. Failing that, Ruglad’s Armoured Orcs are a bit more hefty than pesky human crossbowmen.

which version of pirazzo’s allows dual use? I thought they had to either all take crossbows or all take pikes

which version of pirazzo’s allows dual use? I thought they had to either all take crossbows or all take pikes

Apparently they need to be mixed even: according to the special rule ‘mixed formation’, the first row needs to be crossbowmen while from the second row on they are pikemen.

This was why i asked, taken from WHA: Dogs 5th

The way described above is way more flavourful. The rulebook version just makes you turn the regiment into yet another bunch of either pikes or bows in an army that has no shortage of either. 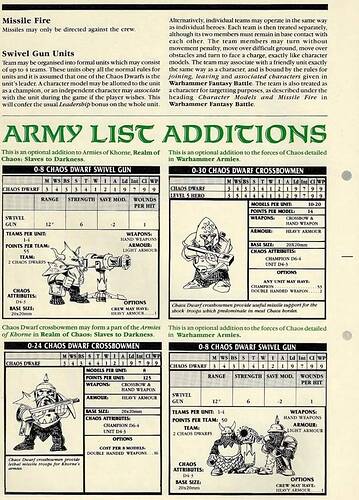 Here’s their rules for 6th ed, they came from the 2002 Annual

Ah that’s much cooler. Makes them a distinctive choice.

Beardlings is great as it also gives good reason for the equipment choices. Pikes and crossbows are safer and require less skill than a great axe or blunderbuss.

Toughness as armour could work, but if you are trying to say a model has a light armor appearance but counts as T 3 heavy armour, then you need to find a lightly armored Chaos Dwarf model, which seems pretty uncommon.

I like option 3 as well. A slave unit lead by a CD master, the RoR character, is very thematic, however then you’re looking at non-CD models for the rank and file.

One alternative is the corruption of our other stunted friends, the halflings! I’m not sure the fluff reasons for not seeing Chaos Halflings, but standard Halflings have M 4. The rest of the stats are a bit of a mess, but a Chaos Warrior has a minimum of 1 point higher than a human almost across the board. It seems reasonable that a Chaos Halflings would be similar, bringing them in line with a human’s stats!

Im a big fan of chaos halflings : ) they are hobbos alternatives for me.
Just painted a mutated one. Need more…

Chaos goblins as well is another alternative