Was Ancient Egypt a Nicer Place Than Ancient Mesopotamia?

Some themes of Trkanjec’s nuanced drift is that of Egypt being a more serene and harmonious place suspicious of strict legal codification of people’s status. Egyptians often portrayed themselves as embracing families and couples, with Mesopotamian art traditions being lacking in this regard, but excelling in terms of depicting atrocities committed by one’s own side. Mesopotamia early on came to see domination, aggression and exploitation as something good, glorying in conquering warlords and developing strict legal codes with a famously draconic bent. While both were ancient monarchies, Ancient Egypt comes across as a culture who loved the good life, in contrast to the more pessimistic and misanthropic outlook of Mesopotamia. The latter also sported a constant phenomenon of impoverished robbers roving the fringes of the lands, without a similar thing being mentioned in any Egyptian sources outside of intermediary periods of collapse and disorder.

It may be added that Mesopotamian kings had themselves depicted with whips, and some even claimed the title King of the Universe. I cannot remember a single instance of Egyptian artists depicting people being flayed or impaled, in contrast to Mesopotamia. Trkanjec’s argument is not one of ancient Egyptians being bereft of evil or shy of e.g. depicting the killing of enemies, but it is one where the nuance difference between ancient Mesopotamia and Egypt is a noticable one, both in sources that have survived and in contemporary ancient Greek sources.

Whether one agrees or not, this rather long essay is worth checking out for anyone interested in the period (hint, Tomb Kings and Chaos Dwarfs, hint). 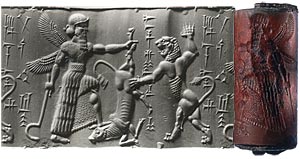