And here we have the last 10 Squig Hoppers, these are from the current Gloomspite range. As with all these models, I love them very much. Lots of character and detail, nice variety, dynamic poses, a joy to paint. Aesthetically we have serious Goblins riding serious Squigs here, compared to the either/or approach of the previous sculpts

I again changed my recipe for the Squig hide, but I am very happy with it. And it was a little faster as well.
Actually, these models represent quite a milestone: all core and special troops are now painted! I will move on to Characters now, finally.

First we have the two excellent models from the infamous Battle for Skull Pass box. I always wanted to have them and snapped them for very cheap on eBay. They were „painted“ but could be salvaged with a nice soak in LA‘s Totally Awesome (nothing beats this stuff at stripping plastic or resin, especially not for 1$ per 950ml) 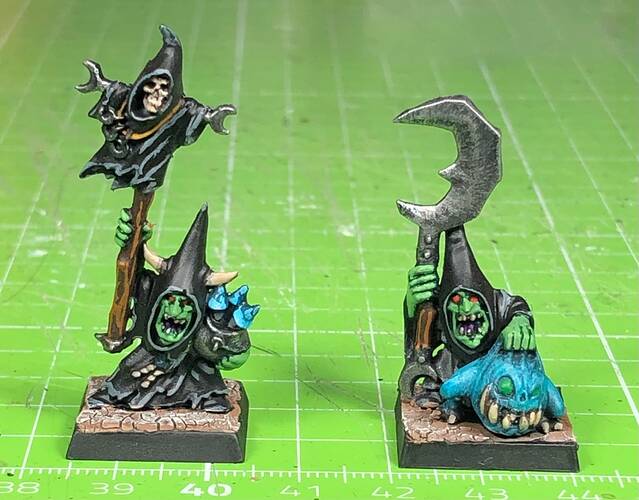 These models don’t even have too much detail and we’re painted pretty fast. First shaman and big boss done.

Then we have Zarbag and this one dude, finally completing my Zarbag‘s Gitz warband, which I use as different models throughout my Waaagh. 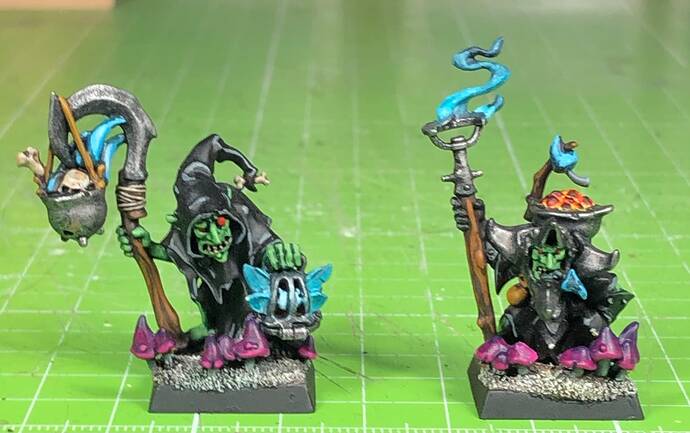 These are very nice models, and a big step up sculptingwise from the BfSP models. They’re also significantly taller (hello scale-creep). The tiny mushrooms are part of the model and are usually part of the sculpted round bases, but they were easily integrated into a square base. Lucky for me no parts of the actual models were on the bases! Second shaman and big boss done.

Then we have this little shaman from Avatars of War. I really like the sculpt, and it came with both staff as well as resin-spell. I couldn’t decide so I combined both. I’m not entirely happy with how the staff turned out, maybe I’ll go over it eventually. But for the moment it’s fine and the overall look it nice enough. As I always said, AoW makes very nice (albeit tall, but not too bad after scale-creep) metal heroes. Third shaman done. 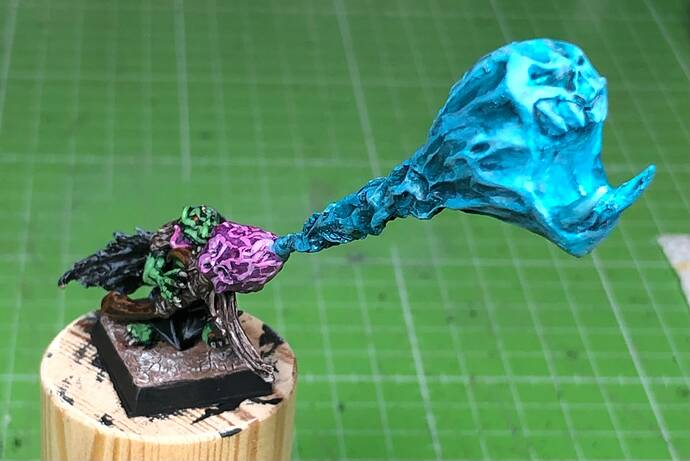 These all look great as usual, you are making me think about revisiting my night gobbos…

Thank you my friend, that is high praise

Oh boi i love these!

Thanks Michael, I really appreciate your enthusiasm for my Night Goblins

Super motivating. Next ones already in the pipeline

Painted my Waaaghboss. This is Avatars of War’s Skrigg Dwarfmocker and I really love this model. It’s funny, it’s quirky, very Goblin! Comes with an optional beer mug to really sell the “dwarfmocking”, but. I gave him a shield from the Stabbaz-kit, cause shields are awesome and a must-have for Goblin characters. 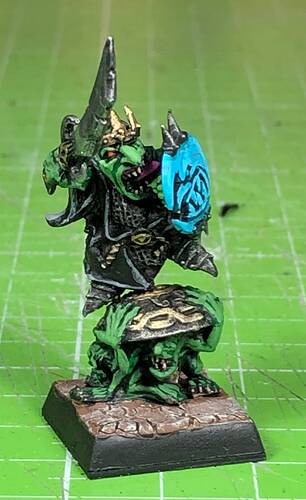 I also put some paint on the Gloomspite Loonboss. I mean finally a Goblin in truly heavy armour! The weapon’s great too. With all that armour and lack of black hood he really stands out, and I gotta say, I wish he had a hood under the armour, like that guy from Zarbag’s Gitz. Still, great model. Technically I’m happy with my paint job, but I may have made a composition error here. I painted boss and mushroom base separately, and I think it might have looked better if that large blue mushroom weren’t blue. Especially from the side the colours are not distributed among the model all too well. But it’s too late to do anything about it now. I might put another coat of coelia greenshade over the mushroom to darken it down a little, not sure though.

Finished the Shaman from the Forgeworld command unit.
Love this guy, I mean what a model! Just an excellent pose, good amount of detail. Compared to the plastic Goblins, the forgeworld ones have this more skinny look we see throughout their range, but it’s still a nice fit. 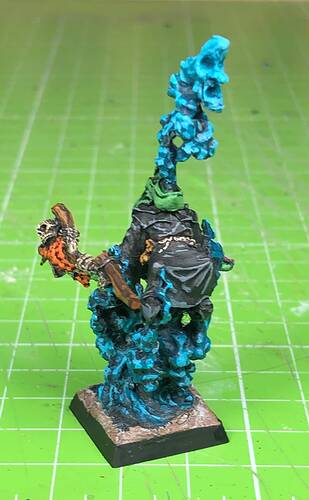 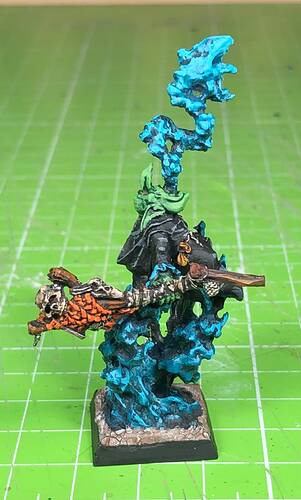 Good job! Always been a big fan of this Shaman, will have to try my hands on a conversion some day…

Finished the arguably most important model in the army, the Battle Standard Bearer, as I cannot see myself ever fielding an army without him. It’s yet another fantastic model of the forgeworld command unit, and it’s without a doubt one of the coolest battle standards I know. It’s got everything: shoddy goblin craftsmanship, dwarven beard trophies, two massiv bad moons, what’s not to like? 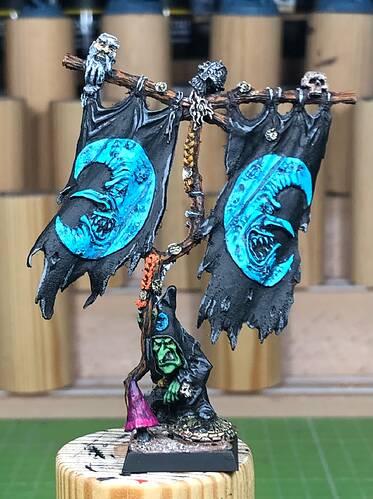 Amazing army. I love how you blended old and new models together. You made me change my mind on new Age of Sigmar models!

Thanks so much, that is high praise!

Credit goes to he Gloomspite range there as well, the models do fit very well with the old range, slight scale-creep aside. But they do rank up nicely.

I find scale creep in greenskins to be much more forgiving. I believe they have much greater variation of size than humans do. My 40k ork army has 1980s up to fairly modern models in it and I like the variation. The same variation in humans may not be to my taste

Absolutely! I mean there even is this “Orks never stop growing and just get bigger the more powerful they get”, and while that may not be specifically mentioned for Goblins or greenskins as a whole, I think that’s very easily reconciled.

Finally managed to wrestle down this beast of a model. The Fungoid Cave Shaman is crazily detailed, I could have used the whole rainbow of colours and still have duplicates, so many different areas on the model. Really challenged my limited palette approach.
I’m fairly happy with this one. The lantern thingy did not turn out like I wanted, but the rest is pretty good. Although I should have switched to my good brushes for the detail work, that was really a mistake on my part. I’ve become too set in my painting ways the last months, I need to keep this in mind when it comes to Skarsnik, I will not tolerate any sloppiness here!
Still, this is a fine model and I was equal parts scared and excited to paint it. Very happy I tackled it and overall proud of the result. He will be my new Great Shaman on the battlefield. 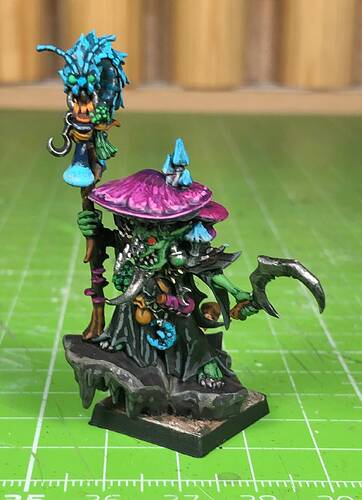