The task: dissect, discuss and agree upon an all-in-one 2000pt list from Ravening Hordes 6th edition.

What roster stands the best chance against a random opponent? @Jasko provided some good prompts in Discord, so I’ve rustled up a starter list to get us thinking.

If this were patted into shape, it would be fun for players across CDO to stress test the same army with their models.

Edit: the values next to the names are their base points value so I don’t get muddled. Quantity is the bold number on the right hand side. 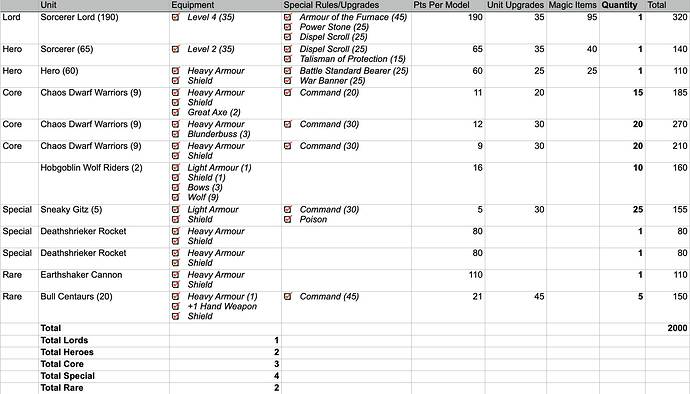 Here’s a couple takes from me, one high magic and one low. 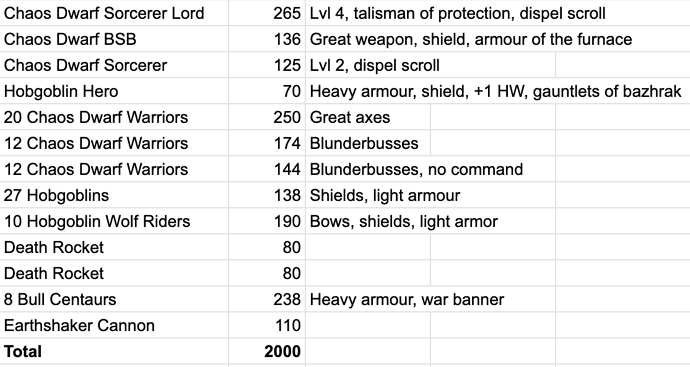 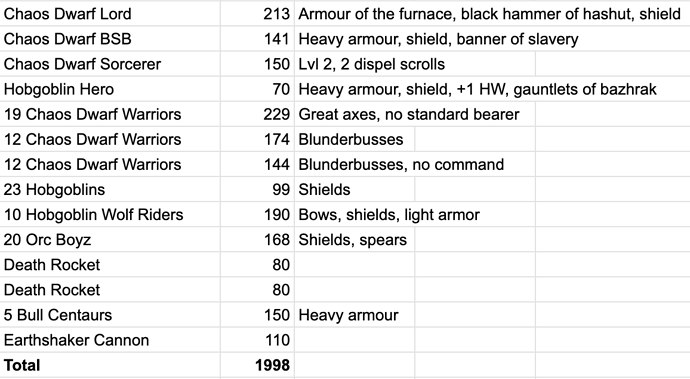 Units have full command unless noted.

Another option for the first list is to exchange the unit of command-included blunderbusses and a death rocket for a unit of 20 great axes and another hobgoblin. Less shooty, more hacky. I’m not sure which would be better for a catch-all list.

Personally I’m not a huge fan of sneaky gits. They’re squishy as hell and wrap-around requires a huge unit to be worth it. The poisoned attacks are nice, but in a tournament style one-size-fits-all I’m not sure they pull their weight.

I am, however, a big fan of greenskins in general! Cheap front line troops that can pack a punch (orcs), be surprisingly sticky (hobbos with a 4+ sv in close combat), or just a phenomenal pain in the ass (wolf riders). Throw a hobgoblin hero in for some more inexpensive murder! And when you are within range of a standard CD general you are holding them with a leadership higher than anything available to the standard O&G list.

Also, my personal choice for blunderbusses is units of 12 as it is the smallest unit that can muster a strength 5 volley and can be spread out to a wider 6x2 when desired. They aren’t likely to work wonders in close combat even in a bigger unit (damn the lack of shield!) so depending on positioning you can either stand-and-shoot or flee when charged. I like one unit along the battle line and one in reserve to guard the artillery, and I use a command section based on that.

Nice writeup @flagellant04 ! I like those lists a lot. I was dismayed to learn Sorcerers can’t wear magic armour. I thought that was part of their shtick.

How do you get 4+ save for the Hobgoblins?

Wow, that’s a change I’ve never I’ve never heard of before. Power creep for days lmao. In 5th you didn’t even get an armour bonus for it!

Back on topic, one thing my lists don’t contain is hobgoblin bolt throwers. Two can be taken for the price of one Death Rocket with 10 points to spare. I think that might be a good call to help with armies like ogre kingdoms or brettonia.