So I finally got my Laestrygon done. The model came with a spear, but I thought that some sort of nasty axe or mace might be nearer the mark for the “counts as ogre” thing. A bit of rummaging in the bits box proved fruitful, so here he is – Death’s Ploughman! 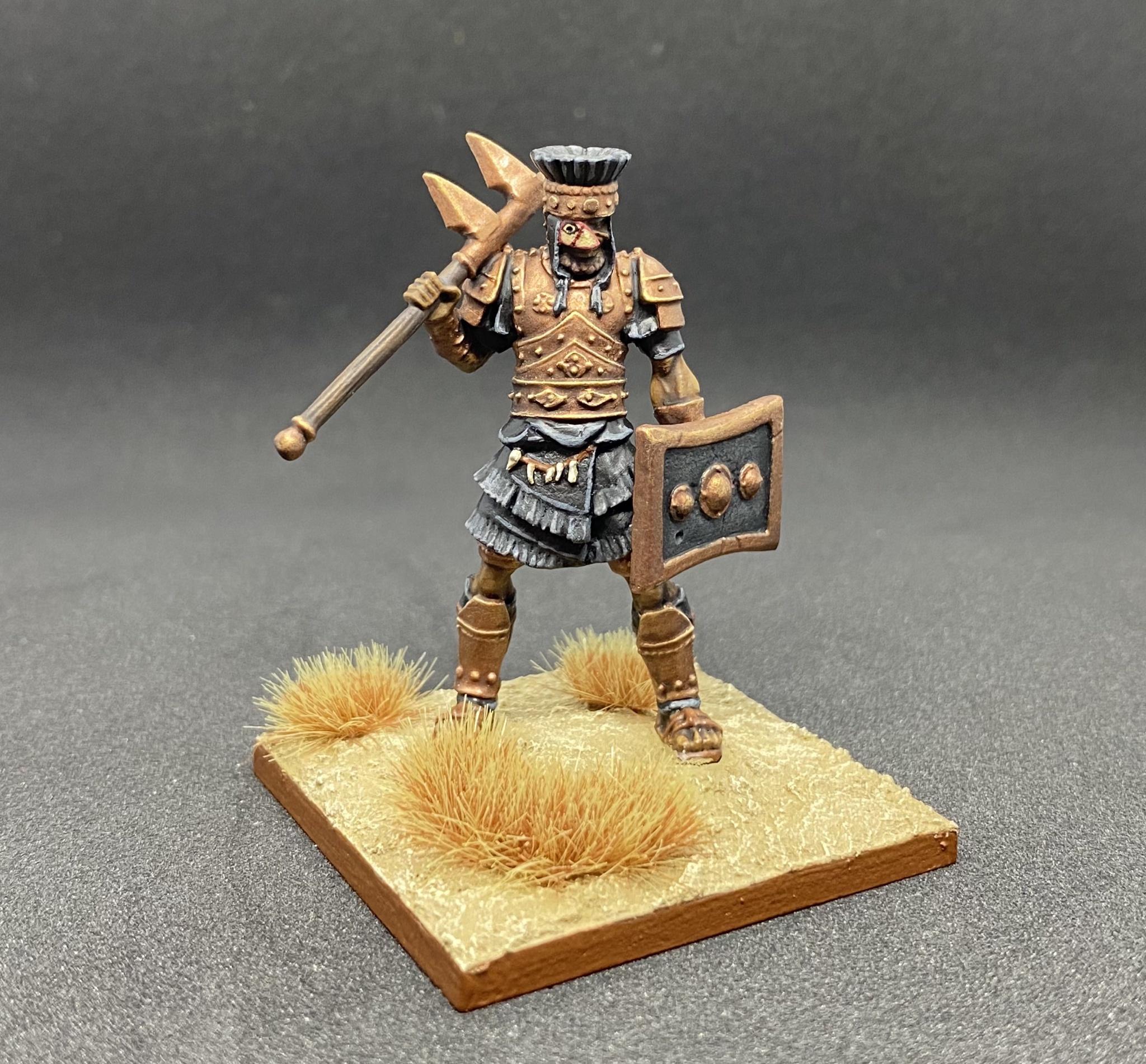 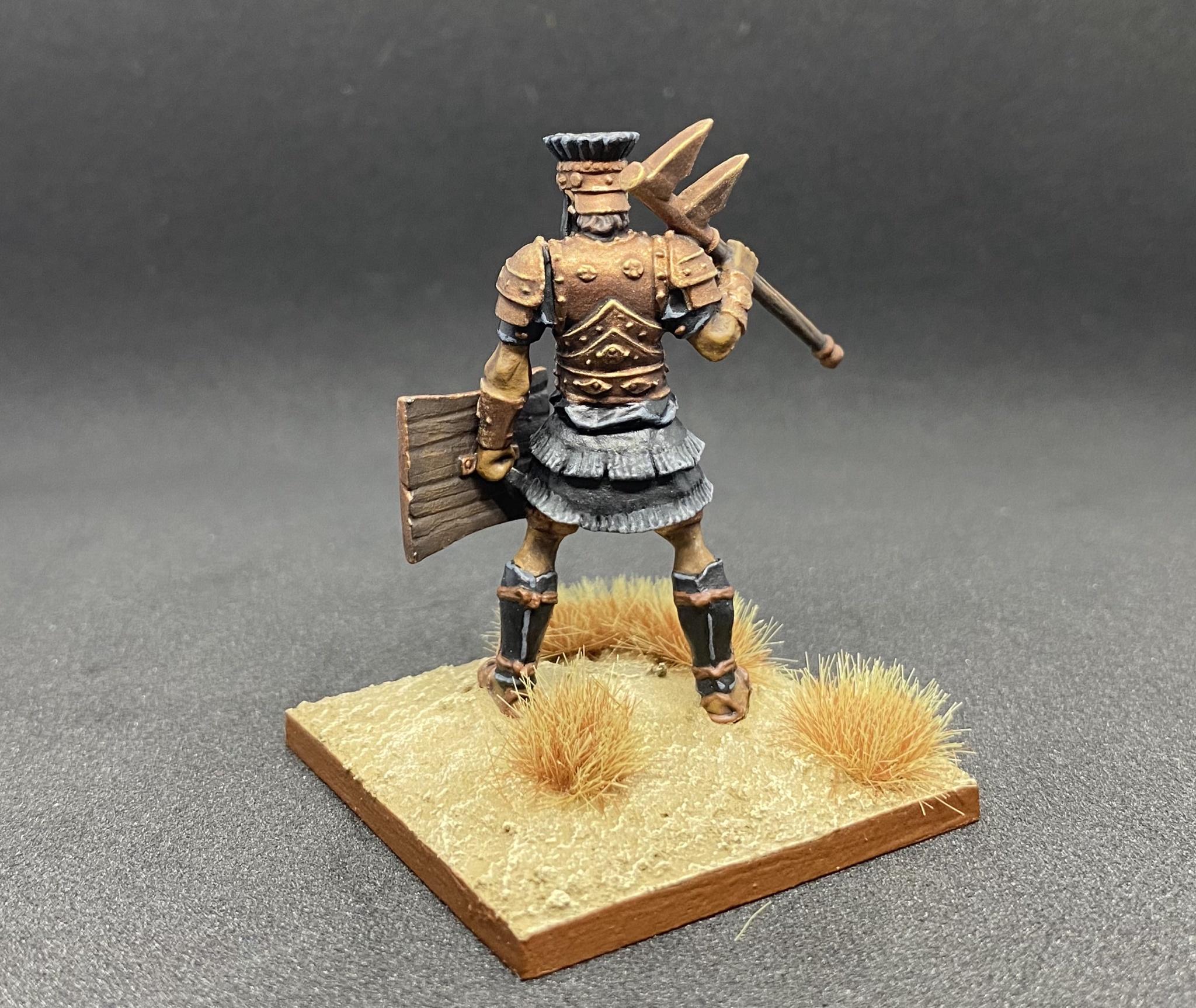 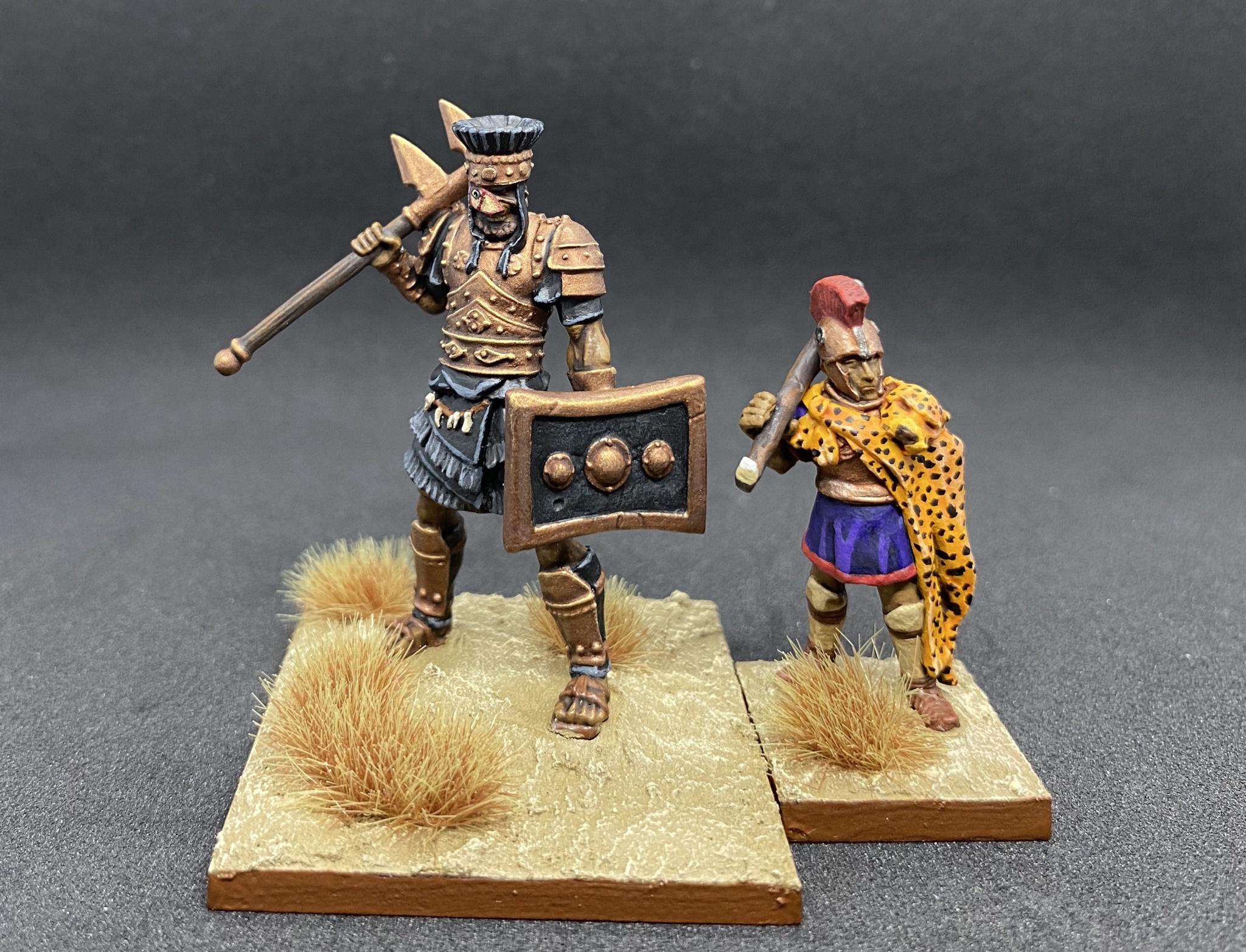 Why is he wearing that partial mask, you ask? Well, because he was disfigured in an accident. Caused by me. With a file. Maybe I shouldn’t be allowed around metal miniatures. :01: I like to think that the mask is painted ivory. Overall, this warband is very colourful, but soon after priming this guy I decided that I wanted him to wear black. It underlines his grim demeanour, and I also thought that it would set off the ivory mask better – I had already made the thing for him, so might as well make it pop!

This lets me build a working 200p Vanguard list with my painted models. I still have some more in reserve to get more options, but as of now, this warband is officially ready to go onto the table!

love em! gotta try some leopard skin or similar on a squig project i had in mind for already too many months

I really like the painted Laestrygon - the grim scheme really offsets the basing and armour. Plus the mask is a cool feature, especially if you have seen Barbarians (Netflix Battle of the Teutoburg Forest series).

Let us know how you like Vanguard - I’ve bought two Warbands in 15mm to play with tjub once this pandemic has passed, and I’m looking forward to getting a taste of it.

@Loidrial This was the first time I tried painting a leopard skin, and after I had finished it I immediately thought that it could look cool on CDs too. Maybe as a mark of rank for a hero or something like that? :24: I’d love to see what you do with those squigs! 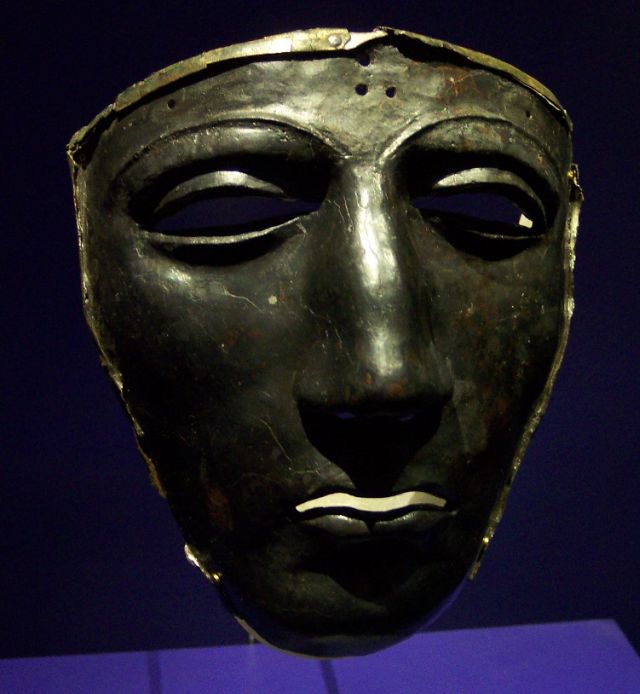 I thought it was a nice touch that they used it in the series because it was found at Kalkriese, which has been suggested as a possible location of the battle. (Sorry if I’m throwing trivia at you that you already know. :01:)

I’ve played a solo Dragon’s Egg scenario the other day (Akhayans vs Abyssal Dwarfs, of course) to get the feel of the rules, and so far I think they work very well and make for a fun game. Especially if you’re a childish fellow like me who likes to immerse himself into the story that’s playing out with the miniatures and dice. For example, I thoroughly enjoyed the Centaur and Bull Centaur fighting an indecisive duel over that dragon’s egg for three rounds straight, only for a Blacksoul to sneak up and grab it… and get a nasty burn from the mother dragon in the next round. :01: But I’ll only be able to give a serious statement once I’ve had a few games with people who are not me. Next up is a game against my wife. Wish me luck! :11:

Thanks for the leopard skin idea - I’ll be stealing that for my next hero character!

And yes, that was exactly the mask I was thinking. I didn’t know it had been found in the region but I thought it was an awesome touch and makes Ari so intimidating on his first appearance.
I’d hate to wear one in combat - this year has taught me masks over the mouth are really uncomfortable.

The scenario sounds like a lot of fun! I think that would suit me well - I play for story, tough decisions and fun. Winning at any cost, min-maxing my choices isn’t my thing.

I think wargames atlantic miniatures do your style of armour and historical figures. Their facebook group had posts of almost the exact armour you used on your chaos dwarf sculpt (on real men).
I know nothing about this era but maybe it is of interest to you

@badmoongrin Looking forward to seeing your leopard-skin-clad 15mm hero!
As far as I know, this kind of mask was used for show purposes only, not in actual combat. Which is just as well, for the reasons you stated. :01: But it does look awesome and, as you said, makes for a very impressive appearance.

@Zoddtheimmortal Thanks for the hint! I just found the post, and it was actually a guy asking Wargames Atlantic to do a plastic set of Trojan War style miniatures… which will of course be extremely interesting to me when (if) it comes to pass! :16: As they’ve already started a range called “First Empires”, one may indeed hope.

Haha, that be a real war wound. “I used to have depth perception like you, until I took a file to the eye.” :02:

Thanks @Admiral! He’ll face no foe more dangerous than me :23:

Did you mean Franz Joseph’s wife, or am I being ignorant of a vital piece of Old World lore? :01:

Don‘t worry, it can get confusing at times with the Franzes :01: but no need to tell that to the guys who‘ve had sixteen Carls, right? :23: