This is a little project I’ve started alongside my CD army. In short, it’s to be a Kingdoms of Men warband for Vanguard, built around a fantasy take on the Aegaean bronze age, set in Pannithor. Going has been slow so far, but I’ve finally found the time to prepare a bunch of miniatures some days ago, and when those are painted up, this lot is going to be playable. I’ll keep adding photos as I progress. The minis are from Wargames Foundry and Redoubt, except the Centaur, whose body is a kitbash from GW marauder bits with the armour sculpted onto it. 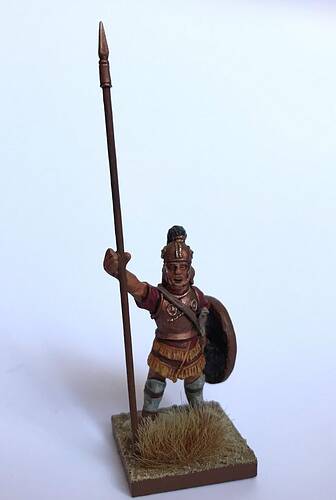 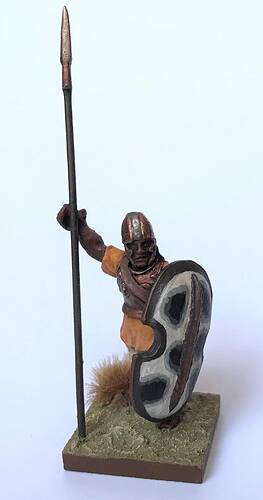 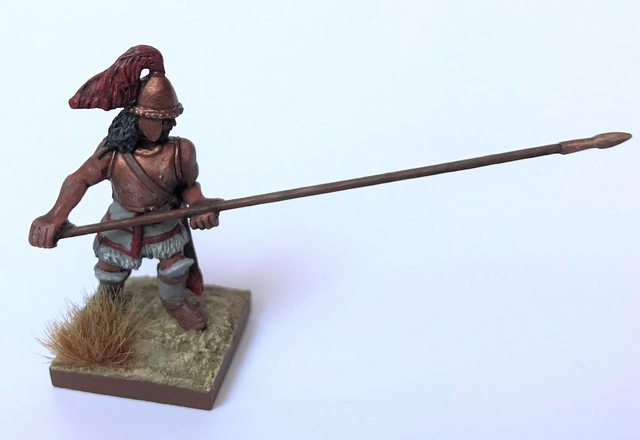 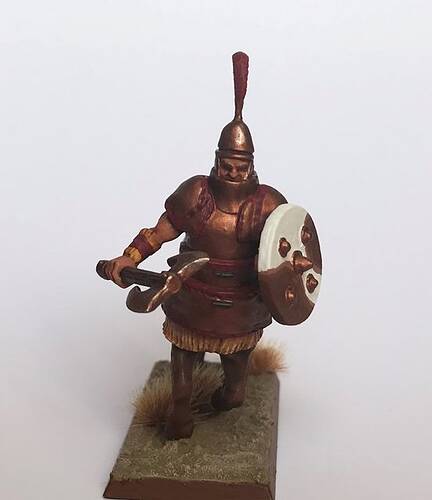 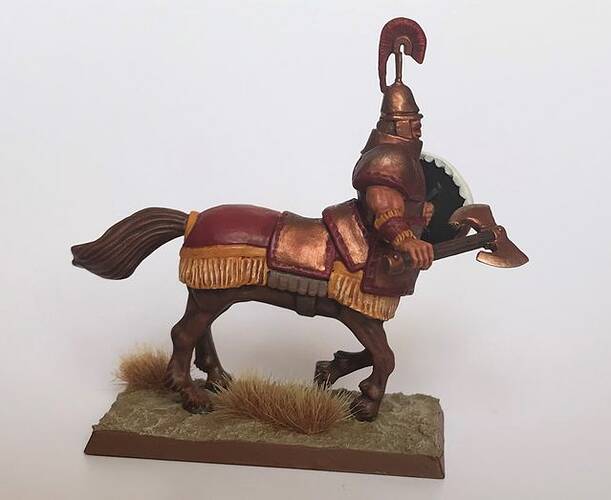 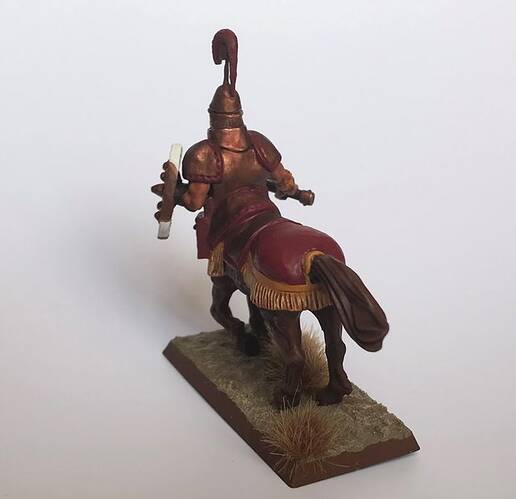 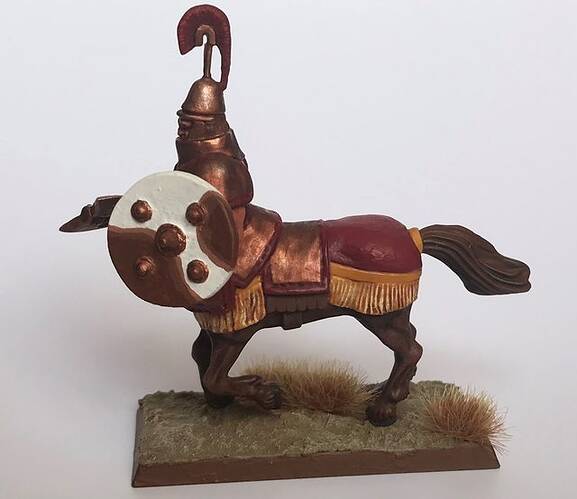 They are really nice. A phalanx of those pikes/sarissa will look great

Here are two Heroes (could be played as Foot Guard or Veteran Soldier): 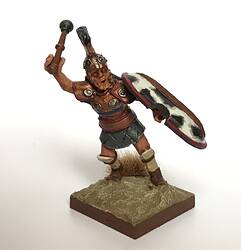 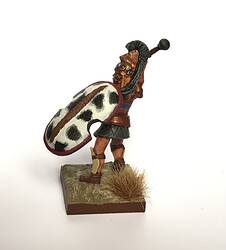 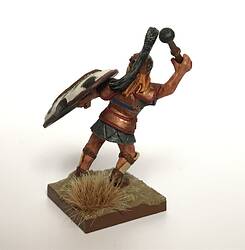 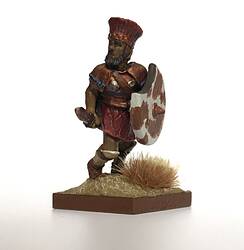 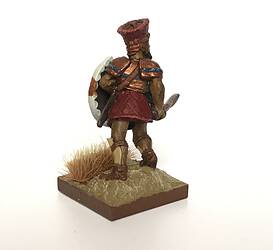 This one is going to be the Leader. Because seniority! 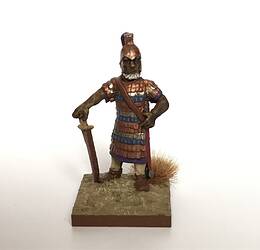 More to come in a few days, I hope.

Great work, fitting basing and neat palette. Keep it up!

Thank you! I‘m admittedly lazy when it comes to basing, and as such I generally use Citadel‘s texture paints (in this case Armageddon Dust). But I think it does bring across the “dusty plain“ vibe I intended

I think the base works well.
You did some building up base work on it first though didn’t you

Well, only in the most minimalistic way. These minis came fixed on small metal bases of varying height, so when I put them onto the actual 20mm base, it produced the effect of a a slight elevation - giving the terrain a more interesting look with no extra work for me!

I only applied some putty round the metal bases’ edges to smoothen the transition.

Hobby time is unfortunately rather scarce right now, and my tendency towards jumping between projects doesn‘t exactly help, I know. But I am about halfway through painting the priestess for this warband. And… look at what I found in the mail! 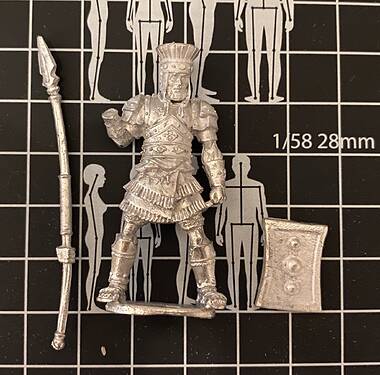 I didn’t realize they were big uns.
That is what I meant, therte was a bit more texture there than just the paint.
I’ve done a lot of the same but using layers of PVA glue and sand to build up around the metal

Oh, it’s just that last one that’s big. The rest are 28mm human size. Sorry, I should’ve put him next to one of the others. He’s going to fill the “Ogre” slot in the Kingdoms of Men roster (but for purposes of headcanon, I think I’ll call him a Laestrygon

Oh wow, these are fantastic. Over indeed that guy is huge, perfect got for the warband

Finally, the Priestess is done! 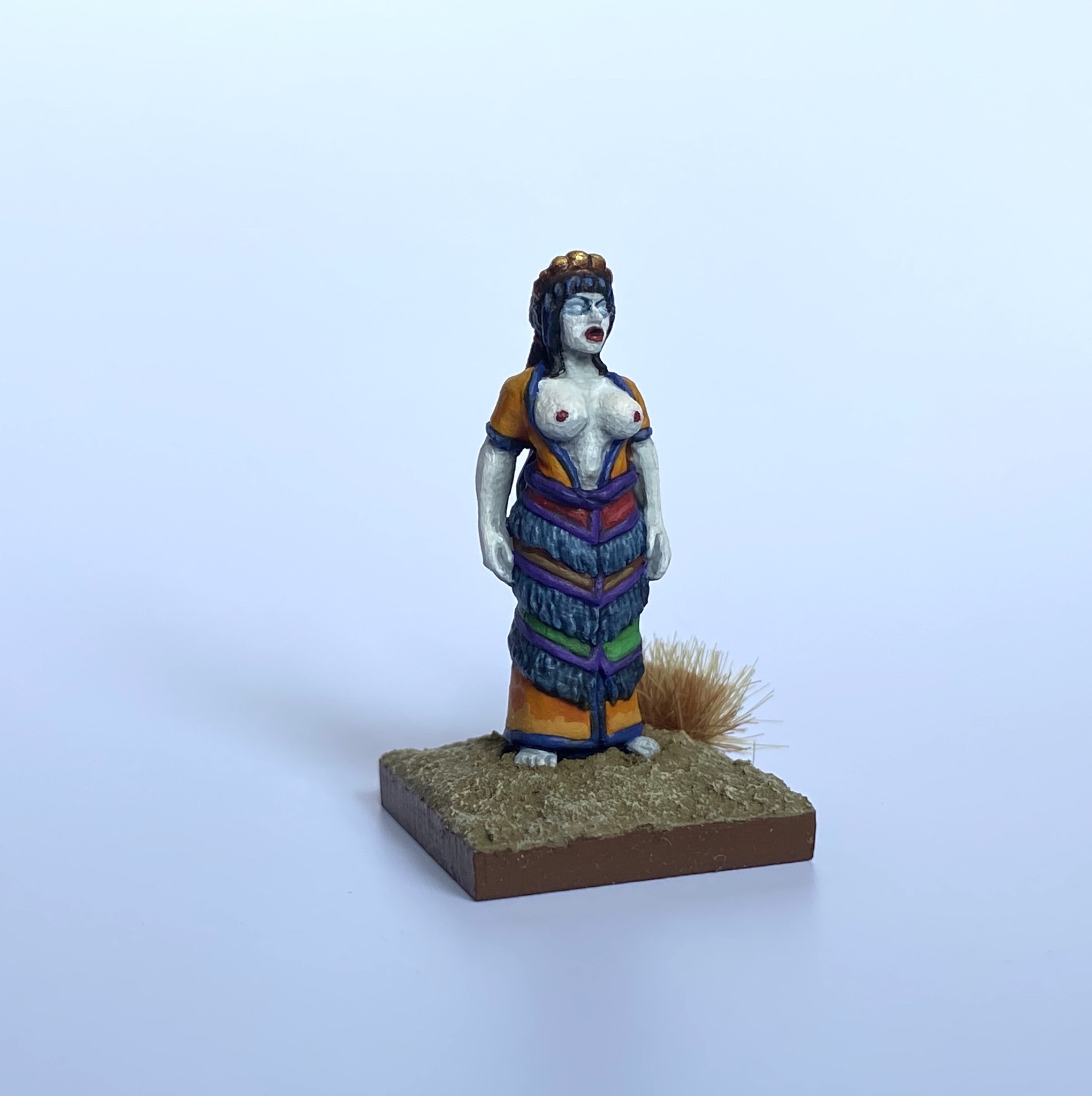 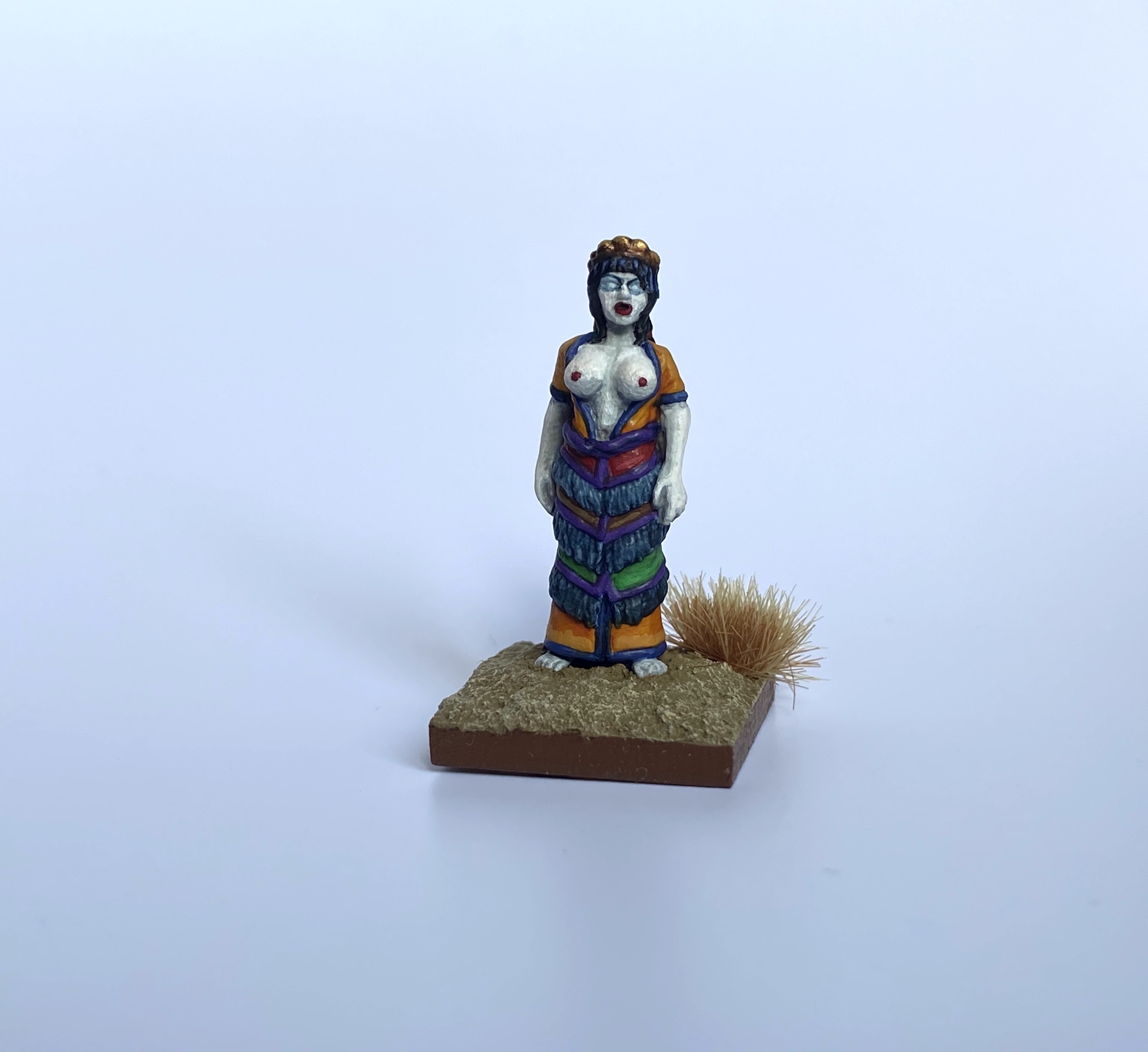 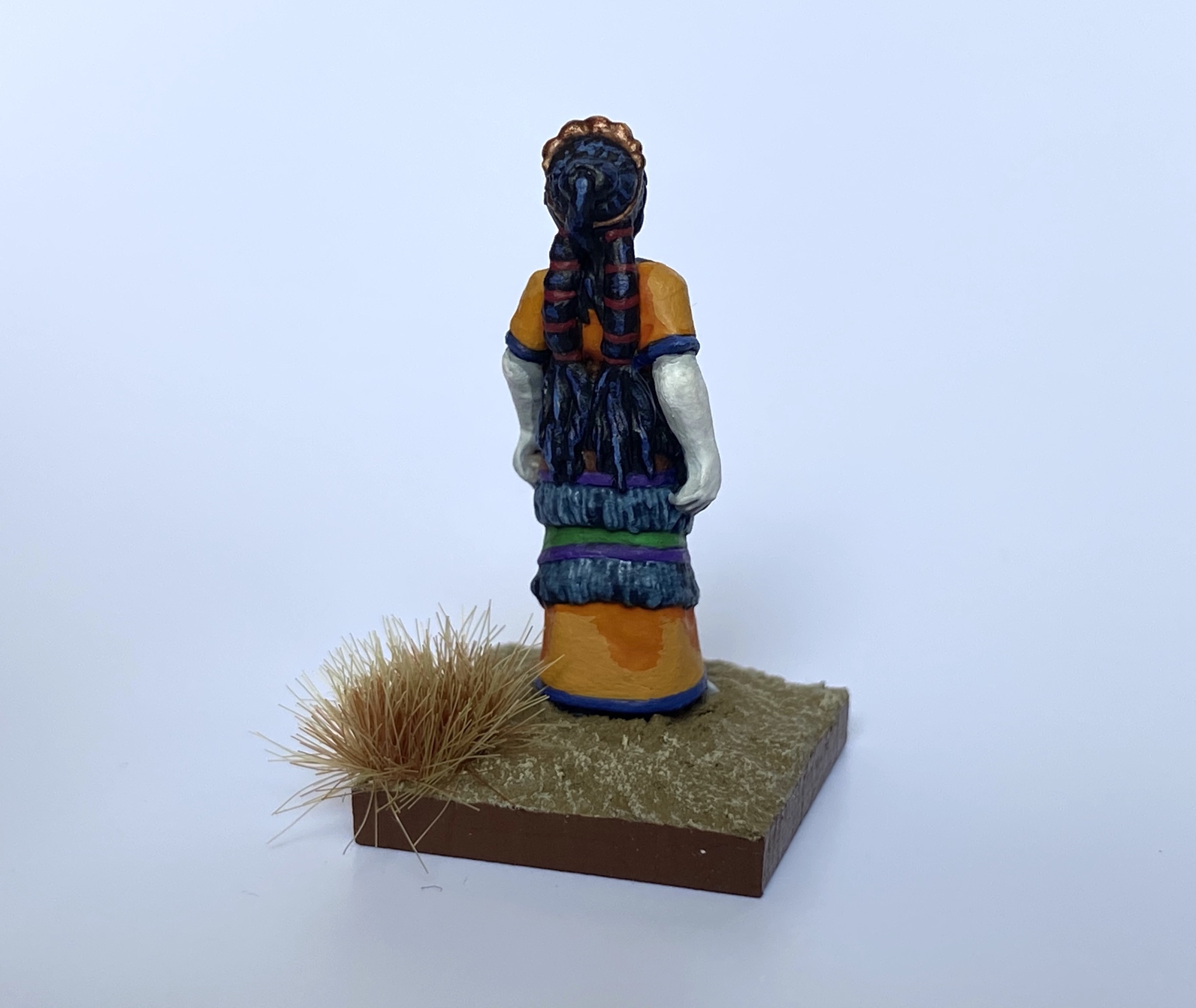 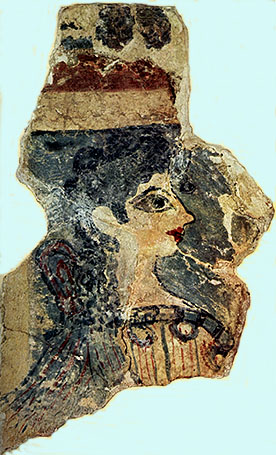 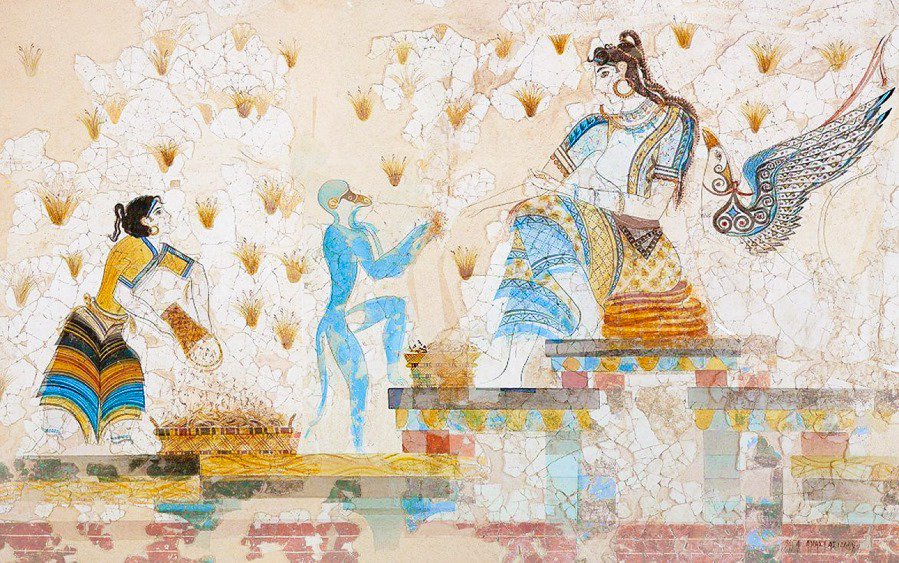 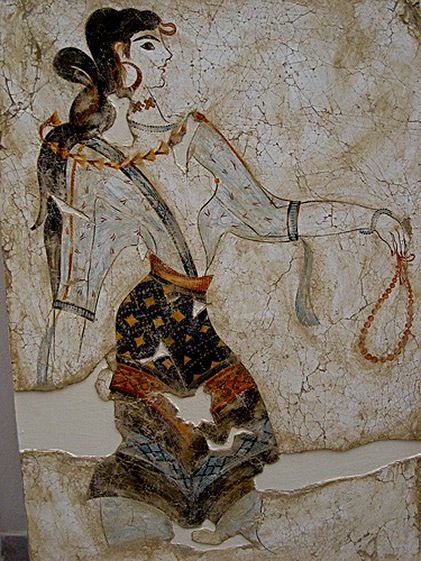 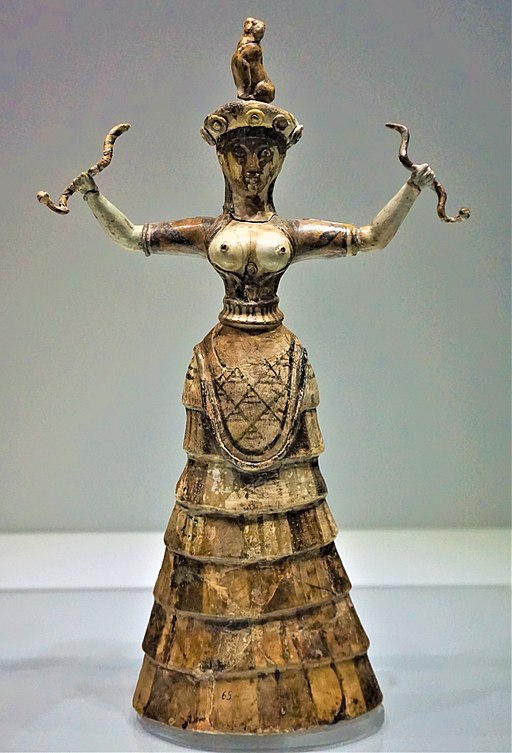 The sculpt itself (from Redoubt) is supposed to be Helen, so basically it represents an upper-class Mycenaean woman. To make her look more “magical”, I took inspiration from the contemporary artistic convention of painting women with snow-white skin and interpreted it as a kind of ritualistic body-paint (an idea that I had already seen realised in modern artwork). Also, I made an attempt at psyker-style glowing eyes. I wanted her to look powerful and, as it were, terrifying, in the way that some Greek myths are terrifying. In that, at least, I think I succeeded. She does look like the kind of woman who will sacrifice every stranger who lands on the local shore.

Well, I’m no great painter. Turns out I’m particularly bad at painting white (or, more specifically, at dealing with the consistency of White Scar). But I can say that this miniature was an honest effort. I really wanted to try and do something more for it than my usual assembly-line paintjob.

While we’re at it, here’s a pic of the whole merry band thus far! 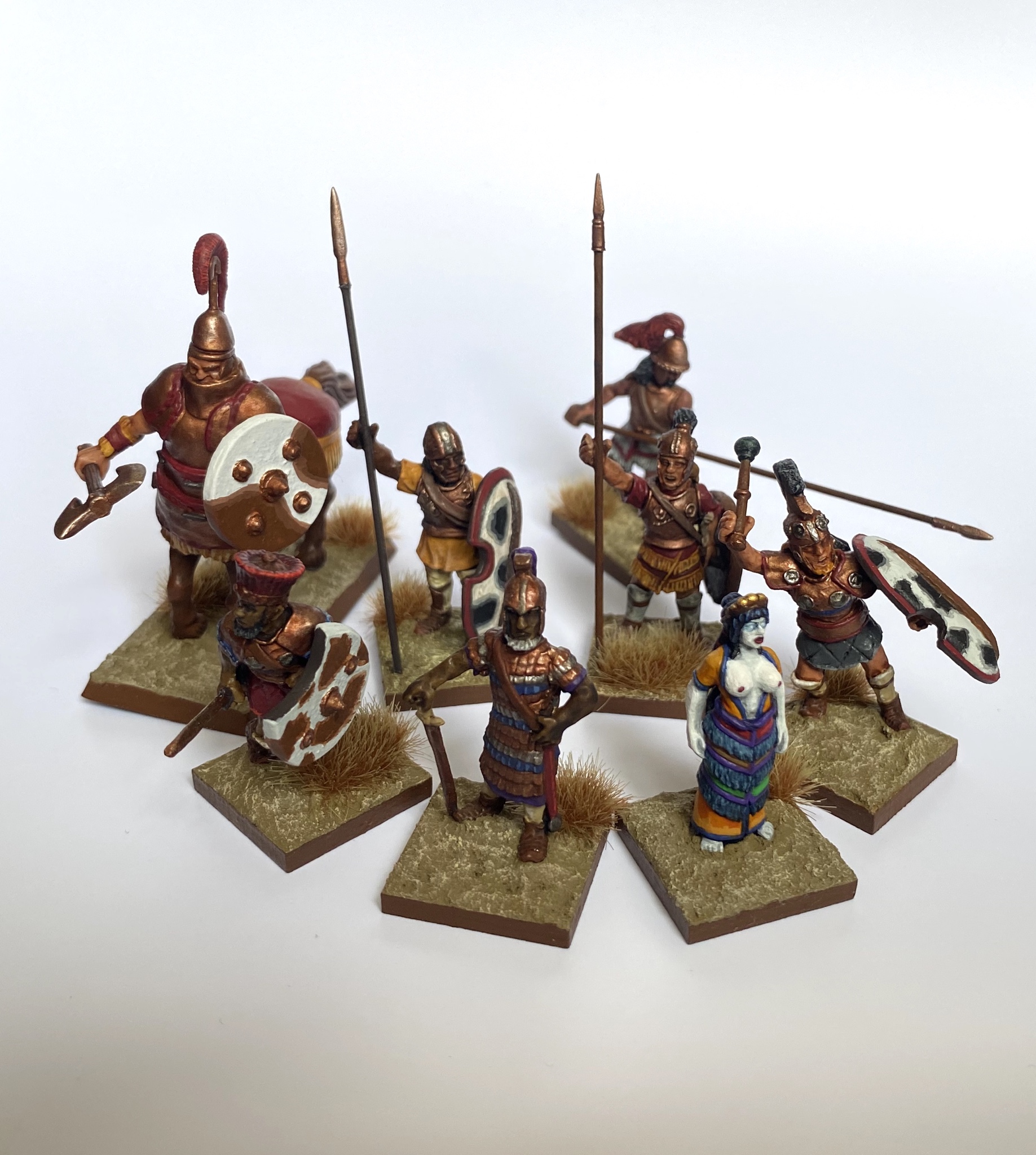 Wow, she turned out beautiful! Great warband, it looks splendid all round!

I think that priestess is a very cool take on the inspiration artwork, especially how you have converted the dress from the source.
At first I was like “ugh, another boob-window miniature” but then saw the source art and had to change that initial impression to “accurate and tonal adoption of the source material”. So really good work there!
Yeah, white is tough. And the GW paints are so uneven in consistency - I swap all of mine to dropper bottles and whilst doing so can adjust the consistency to match what I need. White still generally needs multiple layers and building up from a darker base.

Love the rest of the guys, looking forward to seeing the Centaur and Laestrygon (what does that mean originally?) hewing through their enemies.

Thanks, guys! By Zeus and Hashut, I really should sit down and paint some of these guys once in a while. Come Christmas, it’ll be a year since I got most of them. I definitely have difficulties with sticking to one hobby project.

@badmoongrin Glad you like them! I had been searching for a good sculpt of a Mycenaean/Minoan woman for some time, and this one, from Redoubt Miniatures, was the best I could find on the internet.
Didn’t do any conversion on her dress, though - the only thing I changed at all was a trifle about her hairstyle, and that only to hide a mistake I made in preparing the mini (I very nearly ruined her left eye while trying to remove a piece of flash from the casting).

One thing I admire very much about the ancient artwork is that the partial nakedness is a part of the aesthetic whole, and not displayed for its own sake. And while e.g. the Enthroned Goddess of Thera in the second picture certainly represents that culture’s ideal of feminine beauty, I think that the main impression given by the image is one of power and authority. Same goes for the so-called Snake Goddess in the last picture - there is beauty, but of a kind that is apt to make its viewer go “Oh please, please don’t turn me into a stag so I get eaten by my own hounds!” :01: Anyway, that was one of the reasons I went down the bodypaint route for the priestess: I didn’t want the revealing outfit to be her main feature.

As for painting white, I also found that it works best if I start with grey and build it up from there. The need to paint white was actually the reason why I started experimenting with layers in the first place - it just forced me to try it! :14: I probably should also switch to dropper bottles, and maybe get some acrylic thinner too.

The Laestrygones were a mythical race of man-eating giants, and the closest analogy to ogres I could come up with for this warband :11:

I really had to get something done before Christmas, so here are two new members for this merry band! First off, we have the Furious Hero (Berserker): 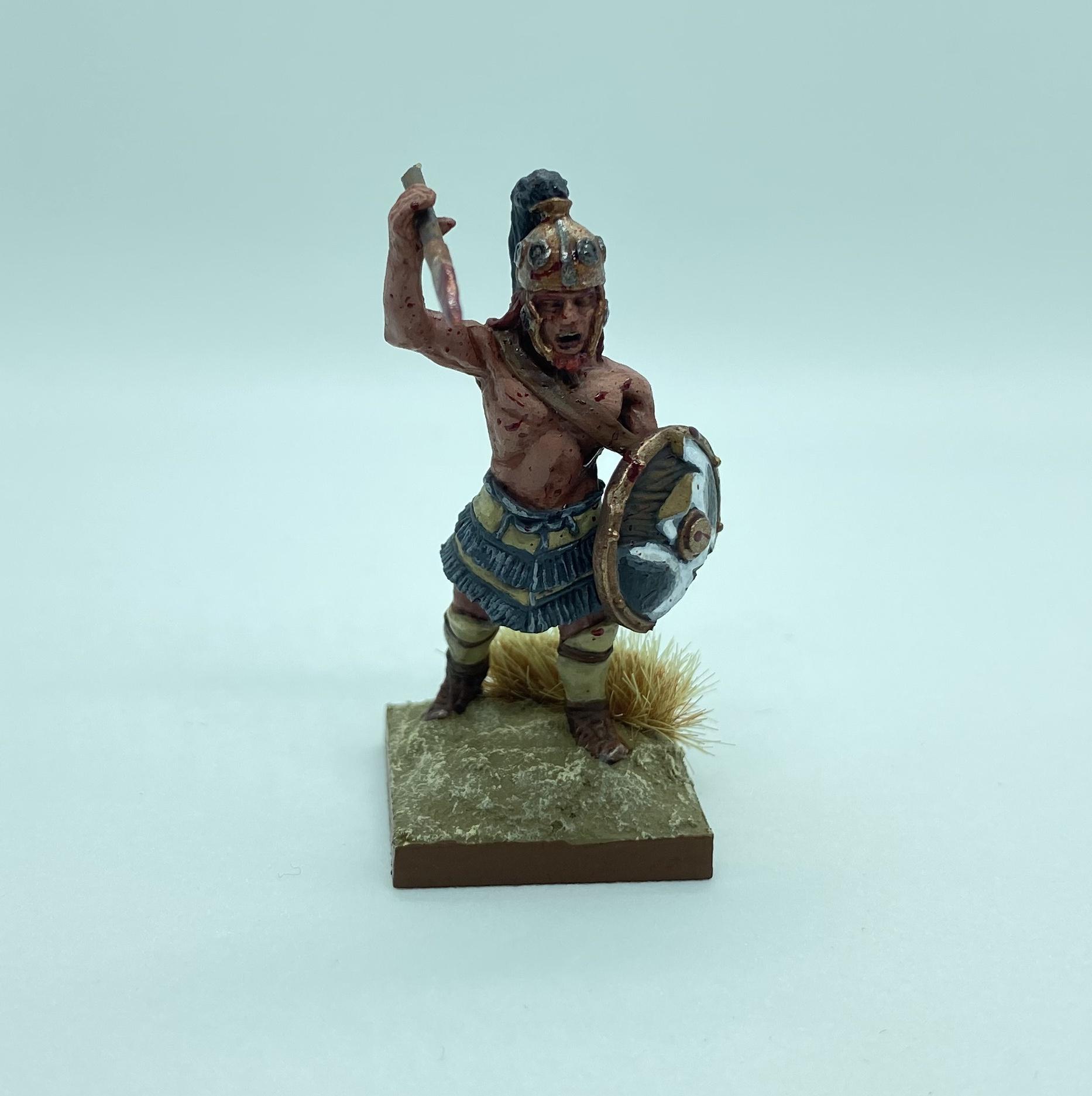 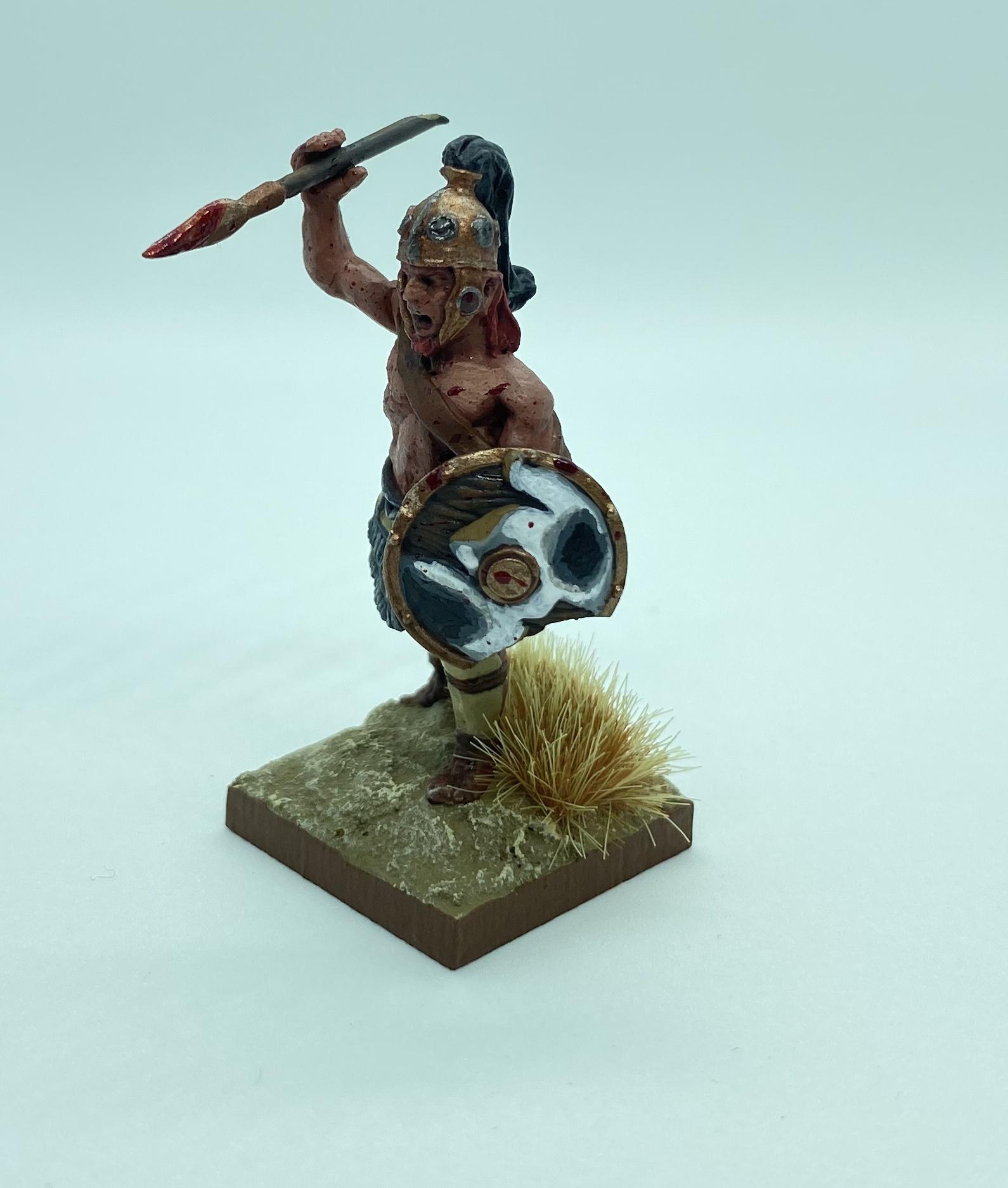 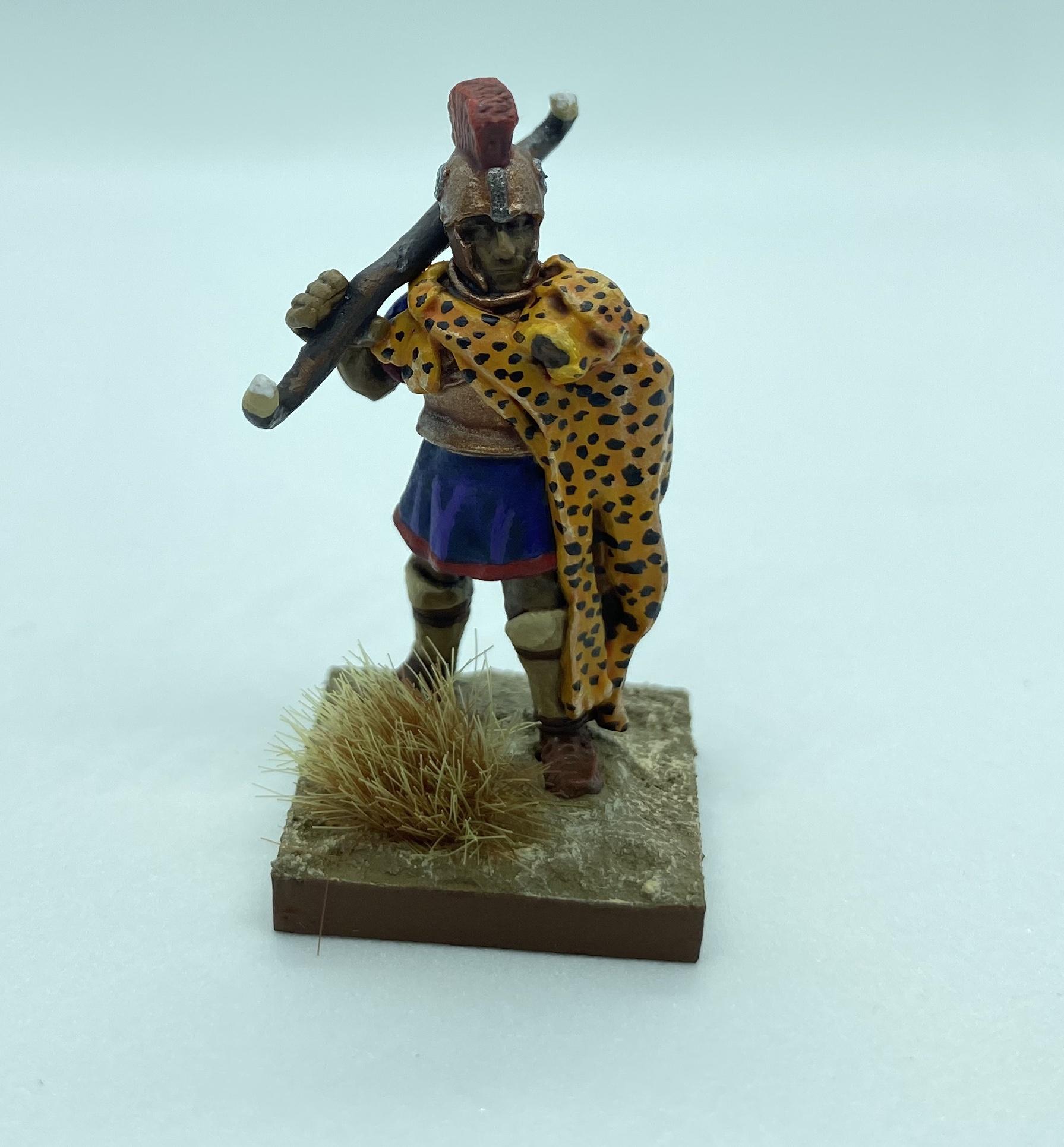 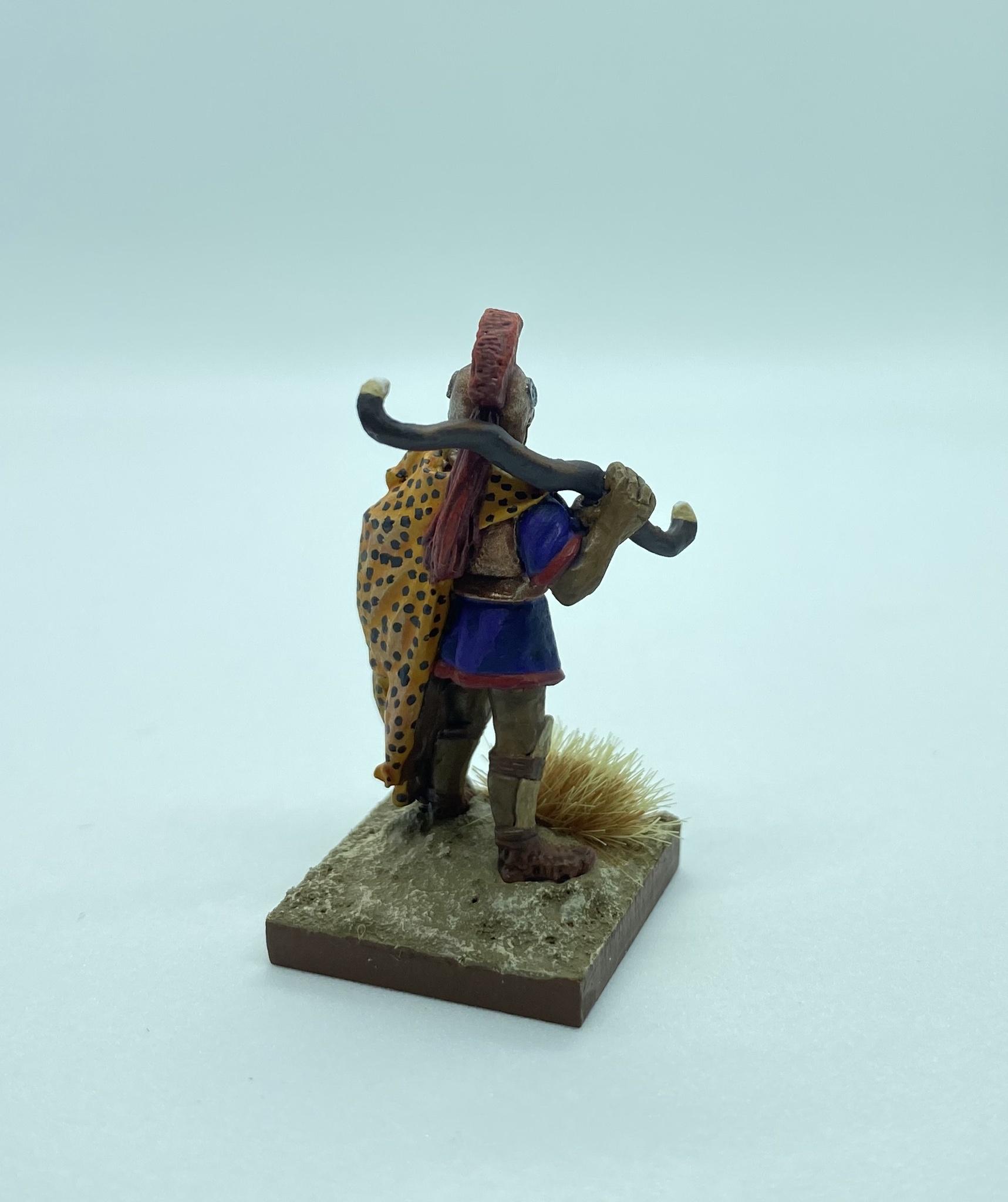 The Arquebusier was the one slot in the Kingdoms of Men roster where it was not quite straightforward to find a Bronze Age / mythological equivalent. The rifle gives him the “Reload” rule, making Shooting a long action, which in Vanguard basically means no moving plus shooting. That seemed not quite right for an archer, but I couldn’t have a bronze-age guy running around with an actual rifle either. Then it occurred to me that heroes in the Iliad often pray before taking an important shot, and so I got the idea of the “blessed” archer who takes the time to make his prayers before loosing each arrow. If we suppose that some god or other does in fact hear his prayers, this actually fits the rifle’s “Piercing” rule too! :01:

Creative idea for an arquebusser.

What manufacturer is the ‘ogre’ from btw?

It’s “Gulial the Nephilim” from Lucid Eye’s Ziggurat range, which is generally awesome :01: