AOS faction specific scenery - what would Chaos Dwarfs get?

All of the factions in AOS now get a special piece of scenery. (Don’t get me started at how this hurts my head in a narrative sense - oh I’m sorry you just dragged that building to the battlefield did you? Haha) however that aside - some of these have been really good looking and it’s nice to see scenery designed to match a specific army.

Lizards have the step pyramid, Fyreslayers have the pizza oven, beasts have the herd stone (which I happen to love the look of) and gobbos have the loonshrine. They all look class and have rules that buff their armies.

What would chaos dwarfs get? We are unlikely to get one as we are a forgeworld army. But in a perfect world - what would you give us and what rules would it have?

I’ll kick us of: I would love to see something that involves slaves. My idea would be a great brazen bull and a series of captured slaves. 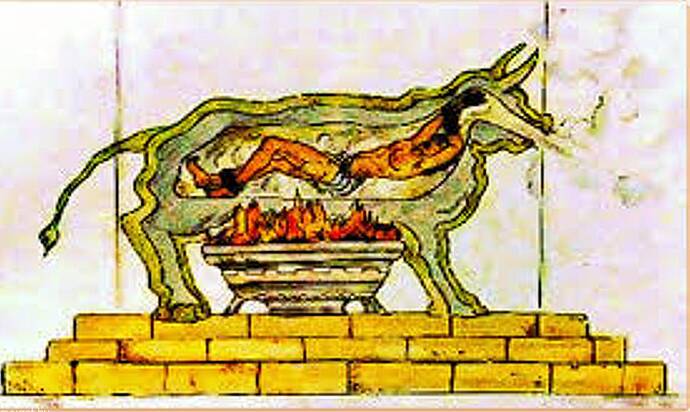 I would imagine that rules wise, the player could sacrifice slaves into this fiery bull for Hashut and receive some kind of buff. Tactically it would be about - do I sacrifice one slave a turn for little regular buffs? Or do I sacrifice them all at once for a great big buff when I need it most.

I don’t play AOS a lot, but I feel that would work well.

What would you guys design?

I too love the scenery themed around the armies now, like you said doesn’t make a lot of sense in matched play but I would have thought perfect for narrative where instead of ‘hey we are going to defend this sacred piece of random rock or random building’ it is now a scared moon shaped rock or building that looks like ours

Throwing in slaves like the herdstone is a great idea, especially if you were running a game/list that still had the slave units like orcs or hobgoblins - chuck them in

We could also go back to the classic idea of our sorcerers turning to stone. Could be that we have this scenery piece where he is deep into the transformation so can no longer move and maybe even having some sort of shrine start to be built around him or something, giving out buffs to nearby units and having negative effects on enemy units too

A stone sorcerer shrine is an amazing idea! Could be carried on a palanquin or upon some kind of pedestal or altar. I believe @Admiral has a nice stone sorcerer model in his Etsy store.

This is my “Brazen Bull” from Golden Hat 31 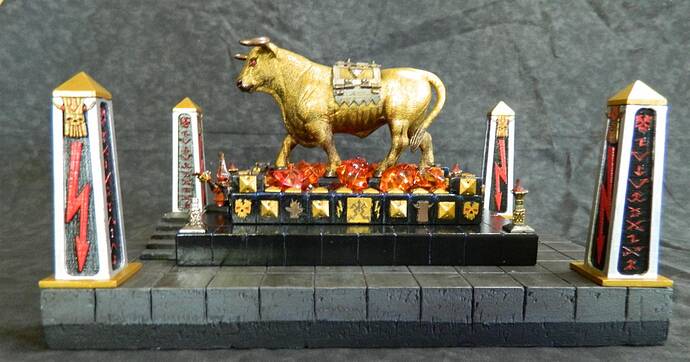 Something like this would be perfect as our terrain piece!

I like the idea of ones where we get buffs for the slaughter or enemies nearby. So up until the nests in the list above, it’d be things like “every X number of wounds to your opponent within Y inches, roll a 4+ for a re-roll to hit/wound/save/cast/dispel next turn” or something (not even tried to balance that yet).

A petrified sorcerer sounds good to me. A pyramid would look to much like the lizardmen one. A plinth crowned by a stone prophet that provides extra magic attack.

Would be something for @thommyh to look into and add to his AoS book?