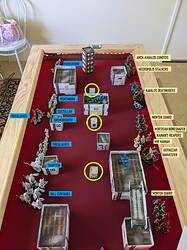 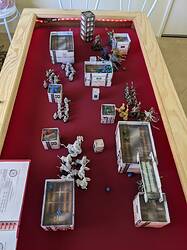 Chaos Dwarves advanced all units and shot with the Fireglaives. Took a few wounds off of the Ossiarch Cavalry. Not a bad start, but the other unit completely missed against the mortek guard, and chipped some wounds from the Gothizzar Harvester.

Shar’tor buffed the Bull Centaurs with a reroll to charge. The Bull Centaurs then failed an 8” charge, with rerolls, against the Mortek Guard. Disappointing, since I wanted to get a head start on clearing them, so I could move the centaurs up the smash the main body of the Ossiarchs. 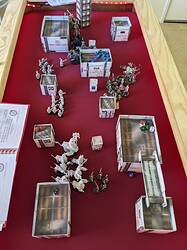 22 OBR charge1920×2560 413 KB
Boney Bois moved to the middle of the board then launched charges on my Ironsworn units and Bull Centaurs.

The Necropolis Stalkers at the top killed half the Ironsworn, took a few wounds in return, but didn’t manage to rout the Ironsworn.

The Kavalos Deathriders absolutely smashed the lower Ironsworn unit and caused the 3 survivors to rout from Battleshock. The Ironsworn did manage to kill a Deathrider that had previously lost wounds to the Fireglaives.

The Mortek Guard at the bottom charged the Bull Centaurs and took 4 wounds from one of the Centaurs. I was surprised at how dangerous these Battleline skeletons are. Two attacks each, special rending weapons, immune to battleshock, etc… The Centaurs killed half the unit in return, but I expected more from the points values of the Centaurs.
. 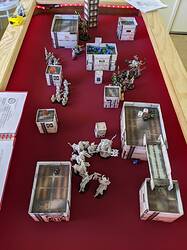 26 CD charge1920×2560 379 KB
All my Fireglaives fired on the Deathriders, and then the Castellan charged, and wiped them out down to a single Rider. Fireglaives are okay… when they stand still and get to reroll 1s to hit. The Castellan was tougher than I expected too.

Shar’tor bellowed and charged the unit of Mortek Guard, and with 9 attacks, failed to wound with a single one. I think he killed one skeleton with his executioner axe “on a 6 to hit you score a mortal wound.” Disappoint. The Centaurs finished the Mortek Guard off.

The Necropolis Stalkers behind the building at the top turned the remaining Ironsworn into a bloody heap of meat.
.
.
.
Turn 3 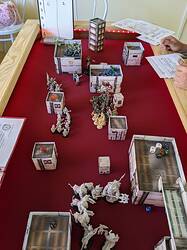 32 OBR charge1920×2560 358 KB
My opponent finally brought his Gothizzar Harvester into play and pulverised a unit of Fireglaives. The Necropolis Stalkers used their ability to ignore terrain and no-clipped the building to charge my Daemonsmith and Fireglaives, killing several. My Castellan killed the remaining Deathrider, but then was skewered and killed by Arch-Kavalos Zandtos.
. 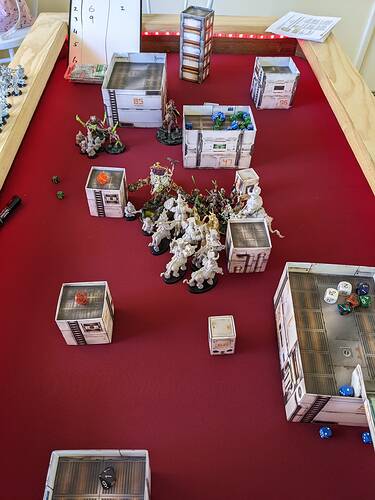 36 CD charge1920×2560 400 KB
Shar’tor rounded the corner and charged The Mortisan Boneshaper, since I didn’t want him reviving any dead skeletons. Splattered him in a single round. Overkilled him. In hindsight, should have targeted something else… Mir Kainan turned around and did 6 wounds to Shar’tor, with his own executioner axe. Super brutal…

The Daemonsmith, and two Fireglaives shooting point-blank, held their own against the Necropolis Stalkers. The Daemonsmith’s Arcane Bolt, the Blood of Hashut, and a good old bashing with his melee weapon, turned out to be surprisingly effective.
.
.
.
Turn 4 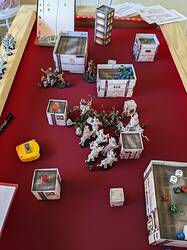 41 OBR move charge1920×2560 376 KB
Arch-Kavalos Zandtos charged in and killed Shar’tor during the charge phase, before combat even begun, with his “deal mortal wounds on a charge roll” ability.

The Bull Centaurs managed to kill Mir Kainan and some Mortek Guard, but were ground to a pulp by the remaining Mortek Guard and the constantly self-healing Gothizzar Harvester.

Surprisingly enough, the Daemonsmith and his Fireglaives kill the remaining Necropolis Stalkers.
.
.
.
Turn 5

51 OBR victory1920×2560 302 KB
The last of the Bull Centaurs go down, and Arch-Kavalos Zandtos speeds across and lances the Daemonsmith.

The game is won by the Ossiarch Bonereapers, both overwhelmingly in points, and by good old butchery.
.
.
.
Post-game thoughts.

Being immune to Battleshock is really good. I lost a lot of Ironsword and Fireglaives to morale, while my opponent’s Mortek Guard stubbornly held on to the last.

I imagined that the Fireglaives would lay waste to foes from a distance, but 9 shots (the champion loses his Fireglaive?!), hitting and wounding on 4’s, doesn’t result in a lot of wounds. Mortal wounds on 6s to hit is good… but sometimes I felt like they were the only wounds I actually caused with them. Rerolling 1’s if they don’t move is nice is nice, but, frustrating for the first turns where you need to move.

I feel like we got the short end of the stick compared to similarly costed Empire Handgunners, who have superior attack and damage, an ability to fire overwatch at units charging them, and BETTER weapon options for the unit champion (rather than worse, in the case of Fireglaives). To compensate, we get 4+ armour and 6 bravery. Whoop de doo.

Don’t even get me started on Dwarven Firedrakes, or heaven forbid, Kharadron Overlord Grudstok Thunderers!

Honestly, I think Chaos Dwarves should be packing the best firearms out there (or at least on par with Kharadron weapons). This should be a unit that other armies wish they could take.

I think the Ironsworn did okay. They’re cheap, have a good armour save, and have a weapon with rending. Admittedly, for 15 points more, I’d rather take Dwarven Ironbreakers, with the same save, but two attacks each, a better pistol on the champion, and a cool mortal wound grenade… but I can appreciate that infantry is probably not meant to be the Chaos Dwarf strong points, so I think its fair that our infantry are going to be a poorer choice, point for point, than other armies.

Maybe it’s just because the gorgeous Russian Alternative models are SO BEEFY, but I did kind of feel like these guys should have dominated. They’re more expensive than comparable cavalry, with less offensive capabilities and less speed. I’d pick the Kavalos Deathriders (5 points cheaper with one worse armour, but fearless, 12” move and better damage on the charge), or Stormcast Demigryph Knights (20 points cheaper, with 1 less wound, but 10” move, and WAY beefier damage output).

Again though, like the Ironsworn, I can accept that they’re not the star players of the army, and so you’re paying a premium for that 7” movement that other armies would laugh at.

Shar’tor was much the same. My opponent’s Cavalry Hero Zandtos was 35 points cheaper than Shar’tor, with similar attacks and 1 less wound, but 12” instead of 7” move, rerolls to wound, better command abilities, and the ability to deal mortal wounds before the combat phase.

Admittedly, I don’t have any big guns. I only have the models I bought from Russian Alternative… and after seeing the original and AMAZING Legion of Azgorh artillery train models, I couldn’t be bothered with the tiny cannon option that RA had for sale.

Right now the army feels kind of weak, and in need of attention. Yes, I’m only 1 game in, and yes, I don’t have any cannons… but I do have opinions on what to change, and seeing as how this army is never going to be allowed into a Games Workshop store or tournament, or even supported by the company in general, I don’t have any fears in rewriting the army book myself. I’m not a competetive player, but I do like flavourful content, and this so far seems rather bland and uninspired.

I’ll wait until I’ve a few more games under my belt before I really begin dissecting the book.

Wow what a battle! That play by play was especially helpful to someone like me who has never played this and have absolutely no experience. Thank you for this.

Thanks. I’m glad you found it informative! I’d like to make a habit of recording my battles, but I’m still figuring out what things are important, and how much to include.

Thanks for the battle report! Those damn skeletons grrr

I never played AoS, so I couldn’t tell if something was supposed to slay or not. But I am not surprised that the Legion of Azgorh list is not competitive. Have they actually updated it since it came out? As for the Bull Centaurs, tbh I have the same feeling in WHFB. The Forgeworld Bull Centaur Renders are absolutely massive, and with shields they are the toughest monstrous unit in the game, but when it’s their turn to do some damage, they come at you with S4 A2 (S6 with Great Weapons). That’s the same as a Dwarf Hammerer (actually the Hammerer has S7 on the charge thanks to Resolute). (And I know, they can also stomp, so yeah, another S4 hit…)

Yeah that’s how i felt about them. They tanked damage well, but felt lacklustre on the attack.

There’s probably more but i haven’t dug deeper yet.