[Archive] A Tale of Three Ships

The Chaos Dwarfs’ society is a ravenous one, ever hungry for more slaves to toil amongst its industries, mines and quarries. In order to supply all this labour, the Dawi Zharr takes to the sea in smoke-belching metal warships. This is a tale of three types of ship used by the Zharr-Naggrund navy, and a tale of the names that will linger with the vessels long after the infamous Chaos Dwarfs in question died.

One of many variant vessels in the Chaos Dwarf navy, the Grappler is an ironclad ship designed for locking enemy ships in place by hammering large, clawed metal arms into their decks. With the arms in place, boarding teams of Chaos Dwarfs and Hobgoblin Sneaky Gits use the arms to attack the victim ship. Normally the arms are pulled into an upright position by heavy chains, drawn by  Daemonic machines fuelled with slaves and ensorcelled coal. The Grappler also have frontal Magma Cannons and side cannons for armament, as well as Blunderbuss firing parapets at the fore. With little space to spare beneath deck, the Grappler’s grand statuary shrine to Hashut is situated on top of a platform on the aft castle. From here, their god follow the Chaos Dwarfs’ boarding actions with a judgemental glow in his eyes. 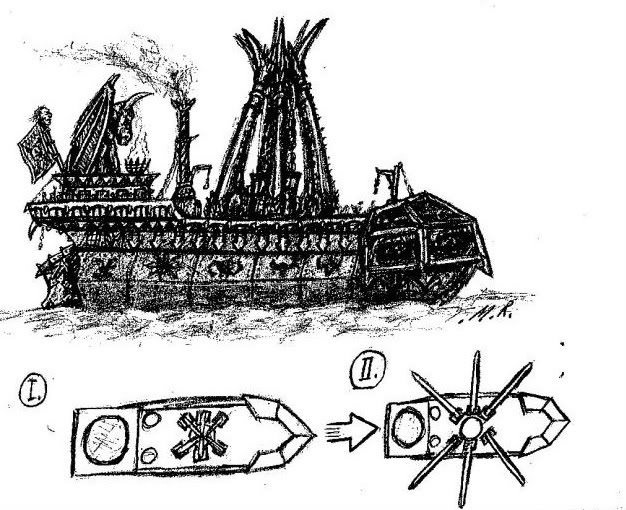 There is much of value to salvage at sea. Especially for the Chaos Dwarfs, whose hunger for slaves, mine props, metal and other materials is never sated. Destroying ships would ruin their boarding value, so many Chaos Dwarf captains instead seek to claim victim ships by force and terror through boarding parties.

The Grappler is built for this task of capturing ships, and few vessels have ever escaped its massive arms without them being winched back. The force of the arms’ impact, however, is great enough to damage the Grappler’s hull despite dampening timber blocks. The renowned Dawi Zharr enslaver Kar-Zhul once prowled the seas in search of coastal-sailing Indan dhows. During his long voyage, Kar-Zhul gathered a whole fleet of captured large merchant dhows, manned by their enslaved crew and commandeered by Chaos Dwarf and Hobgoblin taskmasters. 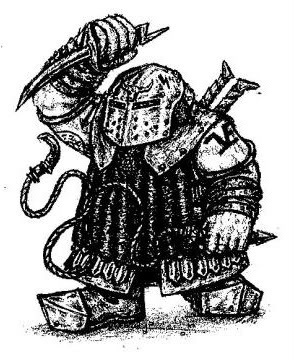 The opulent Rajah Salihindi’s royal dhow was amongst the captured ships, the Rajah’s favourite elephant crushed beneath deck by the clawed arms of Kar-Zhul’s Grappler [/I]Zhargon’s Legacy

A cheap, mass-produced ship, the Hellbarge is a simple freighter with a Daemonic ram at the fore, filthy slave pens beneath deck and a thoroughly chained Hellcannon on deck. Introduced lately into the Chaos Dwarf navy, the Hellbarge is used as a small but powerful artillery platform, well suited for bombarding fortified harbours or for battles in the narrow confines of archipelagos. Some Hellbarges include rocket ammunition that is fed into the Hellcannon’s furnace just as the slaves are cast into it, providing the Hellcannon a greater firing impact but also higher risks for the Hellbarge.

Despite some very heavy chains and powerful runes of control, the Hellbarge is a gamble, a short-sighted investment aimed at reaping great profit before its destruction. Perhaps all the ship’s crew and slaves will be killed when the Daemon break loose, or perhaps it will thrust forward toward the enemy. In case of the latter eventuality, the Hellbarge is equipped with a Daemonic ram capable of capturing the Hellcannon’s forward momentum to propel the vessel straight ahead at the foe. Sometimes the Hellcannon bypass the ram’s grip, running through or even jumping over it into the ocean to thrash through the waves in search of prey. Indeed, the expendable Hellbarge is sometimes used as a boarding vessel, which rams an enemy ship and lets loose the furious Hellcannon.

Since the Hellcannon is expected to eventually tear its fetters and run amok, the Hellbarge has but a skeleton crew of low-caste Chaos Dwarf cannoneers, mariners and warriors. The warriors’ task is to provide a backbone to possible boarding actions. Most of the crew consist of Hobgoblins, wicked jailers who does not shy away from slashing the live Hellcannon fuel with their curved knives, often letting the slaves bleed half dry before a battle. As long as there is no unexpected shortage of ammunition, their even more cruel Chaos Dwarf overlords do not bother with noticing the agony games of the Greenskins.

One Hellbarge captain was Zakuresh the Harsh, who almost got to join the ranks of the Infernal Guard after slaying a rival in an unorthodox torch duel. Zakuresh barely escaped disgrace by taking to the sea in the Hellbarge [/I]Bloodcast 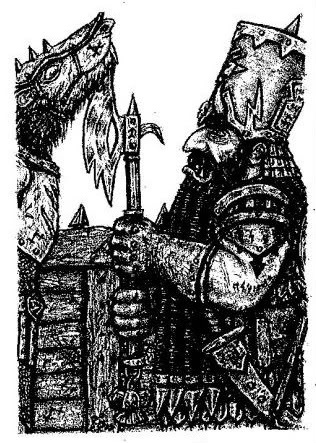 “Do you wish a swift death, Vermin?”
“Y-yes-yes, by the Horned One I do,” replied Itshnik.
“Such is not the punishment for your crime,” Zakuresh informed him.

The four remaining Dawi Zharr crewmen seized Itshnik by his arms and legs, and stretched him out between them. With savage swipes, Zakuresh severed the Skaven’s feet from his legs, then his lower legs from his knees, and then his thighs from his hips. Then Itshnik was cast down onto the wooden deck, whereupon the Chaos Dwarf captain first cut off his hands, then his elbows, and then his shoulders. By the time Zakuresh had finished cutting up the Warlord’s torso, Itshnik the Backstabber was long dead.

A single Chaos Dwarf warrior escaped the bloodshed and managed to return home to Zharr-Naggrund through years of hardship. Limping on one good leg, he told the Sorcerers of how Itshnik was maimed. He told them how the frenzied Hellcannon eventually sank Clan Tyzzkrafft’s flagship, and how Zakuresh the Harsh disappeared beneath a tide of Giant Rats on the open command deck. With a nod, the Sorcerers accepted the disgraced survivor’s story and sent him to the barracks of the Infernal Guard. 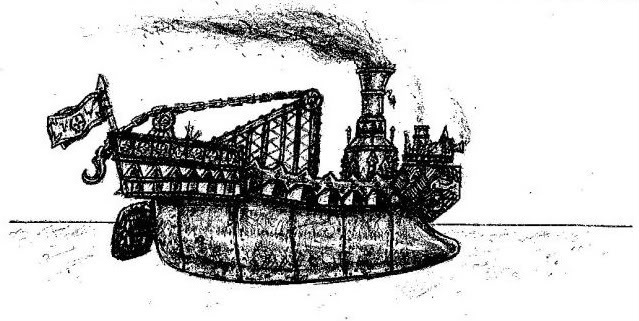 Traditionally, there have been few if any dedicated tugboats in the Chaos Dwarf navy. When large, salvaged vessels or sea monsters had to be tugged, the warships anchored chains and tugged the booty back to port. Occasionally, this could be hazardous if enemy flottillas appeared, or if the sealing work done proved insufficient.

Once, fully half of a Dawi Zharr battleflett was sunk during a major towing operation after a raid against Cathay’s southern navy. As the Chaos Dwarfs tugged hundreds of junks filled with slaves and plunder across the ocean, a Dark Elven fleet appeared at the horizon. Though vastly outnumbered and outgunned, the commander of the Dark Elf force, Lokhir Fellheart, seized the golden opportunity to strike when most of the Chaos Dwarf ships were locked in towing service. Sinking many ships, both Cathayan and Chaos Dwarfen, and capturing one quarter of the junks, the Dark Elf captain left the battle as rapidly as he had entered it.

In response to this audacious act, Hellsmith Azhnerek (the husband of three, the father of twelve and an ambitious engineer) constructed his tugboat, which found a place in most larger raiding parties since few Sorcerers wanted to be caught off guard at sea again. Amassing slaves, prestige and metal as payment, Azhnerek the Visionary began his next work.

Having observed the need to resupply fuel and ammunition as a hindrance to the Chaos Dwarf navy’s long range capabilities, Azhnerek let construct a mobile port and storehouse of immense size. It is built upon a mighty Daemonic rock calfed from the Southern Wastes, and it is shaped akin to Zharr-Naggrund itself. As an engineer’s sacrifice to Hashut, the floating base is intentionally oversized and lack mechanized transportation for all but the largest of supply wares. Its battlements bristles with weaponry, and thousands of slaves labour day and night to transport wares up and down its great stairs. A fleet of tugboats is required to move the naval fortress, and it is constantly watched over by at least two Battlebarges plus escort ships. Beneath the water line, docking caves for submersible vessels have been created. In the skies, Great Taurus riders can be seen flying. Through a great investment of slave lives and materials, Azhnerek the Visionary’s plans have seen fruitition. Although its practical value for the navy is disputed, the Ziggurat of the Seas is one of the true wonders of the Chaos Dwarfs. 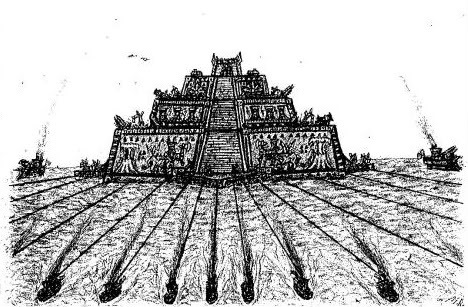 The Ziggurat of the Seas 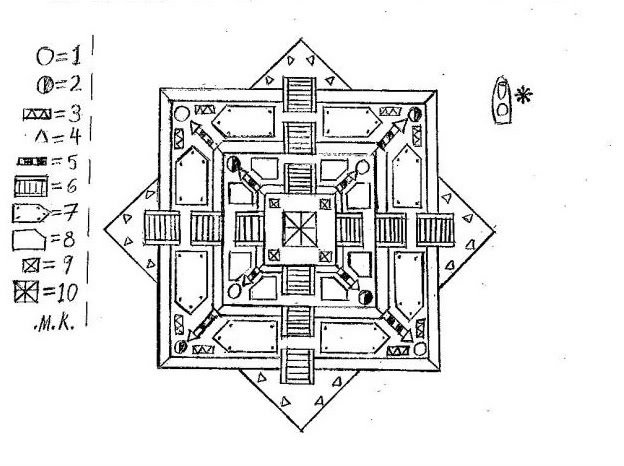 Looks good to me. Only alteration I’d suggest is for the first ship, change ‘poop deck’ to ‘aft castle’ as I think it’d be a tad disrespectful to put Hashut’s shrine on the poop deck (either that or the entire crew would keel over from constipation a few days out of port - would you be able to go with your God looking over your shoulder? ;P)

Thanks! Ah, but that specific naval term was the most exact one I sought for when this was written some years ago. It’s a good idea to replace it, but since it’s been in the last Word of Hashut issue for some time now, I’m okey to run with the correct naval term, even though it’s a very odd one in English…

This was just copy-pasted and given reverse italics from the log since I realized it wasn’t filed in this forum section. About time it got done.

Great Chaos Dwarf background. I cannot help but think that the demise of the ‘Ziggurat’ of the Seas would be an epic tale in and of itself.

Thanks a lot! That’s true, it would be. Sounds a bit like a James Bond movie, too.

As a Clan Skurvy lover/Salt Seer/Acting Fleetmaster of the Council of Thirteen, word-things escape me how much I like this background material.

I have to say that the Ziggurat looks a lot like the BFG Black Stone Fortresses, which brought back some (I guess it’s been long enough since BFG was killed off) nostalgia. Bet it hits just as hard too!

Thank you very much, Ikkred! We’re in the same boat, then.

Anyways…the only suggestion I would add is maybe the idea that the Hellbarge could also be used solely at times as a ‘boarding party’ machine of war (boarding parties were always fun in Man O’ War)…the ship is purposely rammed in to the broadside of an enemy ship, the restraining chains are then released and the Hellcannon unleashed onto the deck of the enemy ship, running amok and tearing apart the enemy?

I’m going to make some of them, just for fun.

@Fuggit Khan: Thank you! You certainly had the right kind of taste as a child, then! Now I’ll have to watch the same show if possible.

Yes, the boarding idea is so good that it must be included. Thanks for that! Aft castle included, too, Dînadan.

@Abecedar: I’d love to see that!

Quick question. To catch other ships you have to be fast(ish). So the “Grappler” would have to be the same size as the hull destroyer not the bigger / slower Battle Barges wouldn’t it?

It really should be a large ship with a cadre of daemonsmiths/sorcerers aboard casting invisibility spells on it to hide it while the smaller, faster ships herd enemy vessels towards it so it can capture them

Fairka over Deviantart has kindly drawn a portrait of Zakuresh the Harsh as part of her kind and ambitious mass request for original characters of others to draw herself: 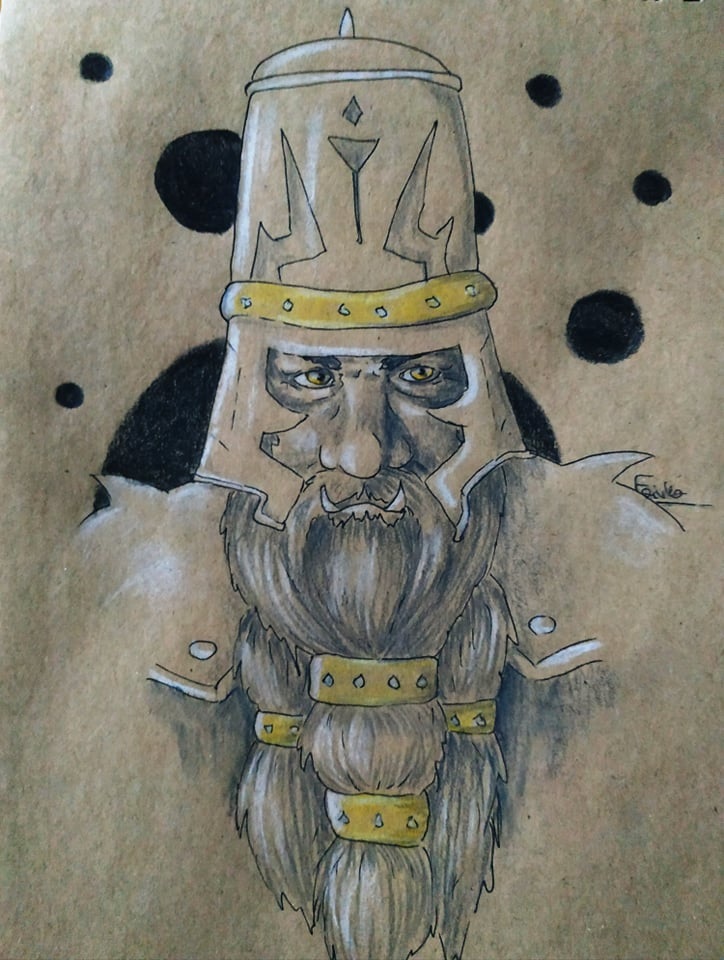 Images restored after the very latest new round of Photobucket rodeo.