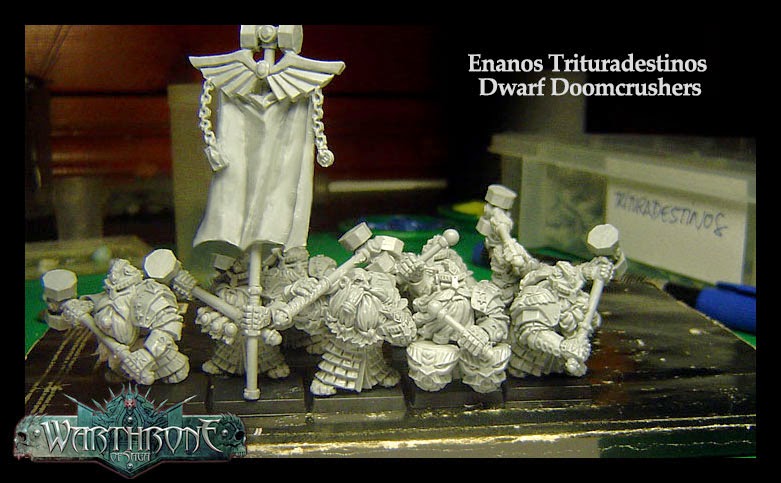 Thank you for the picture. The links in my campaign update mail didn’t work.

Weren’t these released a couple of months ago? :~

There is an uncanny resemblance. This must be proof of Spain’s copyright laws.

Not sure the standard bearer is a good idea, he has a double handed weapon and a standard?  Otherwise very nice and they look nicer than the GW ones, but with longer arms.

I would have passed the champion and armour similarities off as a mere coincidence, but with those octagonal hammer heads we do enter shameless territory. That kit cannot have been sculpted, or at least detailed, before pictures of the new GW Dwarf releases started to appear.

In the end I’m too much a fan of AoW to mind. Their quality is too good for me to view them as mere imitators. Still, I thought AoW were stylistically moving in their own direction with the Dwarfs. Their earlier models had non-GW signature parts like bare arms and special bracelets, and their concept drawings contained a lot of dragon motifs and some other novelties for those used with GW Dwarfdom. This looks like something of a break with that.

How does their cost compare to the overpriced GW ones?

I bet they’re cheaper at any rate.

How does their cost compare to the overpriced GW ones?

Except for that supposedly three-armed standard bearer.

GW’s kit isn’t much worse in my opinion, but these have vastly superior heads and beards. Which is critical.

I think those guys will be great for conversion. They have what the other AoW dwarfs been missing - a hell of a lot of armour!

The current pricing of AoW regiments is a lot cheaper than GW.

The preorder deal for witchelves gives you 30 miniatures for 35 euro. GW gives you10 models for 45 euro.

I like em ,but I bet rinking them up is a b…tch

They cant be harder to rank up than Infernal Guard. They are pretty cool models and would probably look great in a CD army (agree the standard is a bit weird though) but he really needs to start releasing units faster or else it will be 5 years+ before we ever see a CD unit from him. It sounds like the whole Warcast thing was a disaster and really slowed things down.

These are now up for pre-order.

If the heads and beards were separate from the bodies like on the berserkers they would be great for conversions to chaos dwarfs. I think they would turn into great big hats. At the moment they would be more work than I’m really willing to do.

I think ill order them while they are on offer and just keep 10 and the metal champion.

I am trying to oder them but every time I click on add to cart, the page refreshes and then it tells me my cart is empty.

Think Il email them and then try once more and if no luck, I buy dwarfs from somewhere else.

Money burning a whole in my pocket, if they don’t want it I’m sure somebody else will.

I am trying to oder them but every time I click on add to cart, the page refreshes and then it tells me my cart is empty.

Think Il email them and then try once more and if no luck, I buy dwarfs from somewhere else.

Money burning a whole in my pocket, if they don't want it I'm sure somebody else will.

It looks like its still working for me. Try using a different browser or clearing your cache or something.
system 27 April 2014 01:23 #20

The dwarf was has begone.

The problem is i already have to many dwarf figures .Just waiting to see warhammer new slayers