Today, the Google logo had a strange look to celebrate the 19th century Norwegian illustrator of trolls, Theodor Kittelsen. Looking through some of his work, I stumbled across Trollshop.net, which carried a mention of handing out a $20 check for a troll story if the one who runs the site liked it. Dwarf greed kindled. Always an excuse to make something quick up on the spot (and yes, I spotted afterwards that no new stories had been submitted after 2005, although the webstore bears copyright for 2017, but what the heck):

Once upon a time, there was an old, old troll known as Furax who was so huge, that he towered high 'bove pines and oaks. His shadow cast whole valleys in darkness as he wandered, his head lolled high above the clouds, yay even the mountain tops he would stumble upon with his gnarled feet. And each time he stumbled and fell upon the mountains, he would land flat upon the country and rend out fjords from the coast as his fingers struggled for a grip when Furax slowly and clumsily tried to rise up again.

Yet the other trolls feared him, for whole tribes had been squashed or locked into caves by landslides by the fumbling of Furax, and so the elder trolls from all over Norway met at a secret forest thing, and they all conspired to get rid of Furax before the big troll crushed them all by accident.

Much advice was passed between the elder trolls as they locked their tails together and mumbled through mossy beards, yet no measure of effect was found which could work upon the titanic forefather troll. Eventually, one elder’s daughter, named Hyssa, came up with a bold plan, and the helpless elders agreed to let her have her way, since none other could be found.

The next time big Furax the troll fell, Hyssa scrambled and climbed into his giant ear, and yelled with all the force of her lungs:

"Look at me. Just look at me! Look at Furax the big! I am stumbling and mumbling and bumbling. I am squashing and sloshing and doshing. I am crushing and hushing and blushing.

All the lands of the north I have trampled and trod, yet now I am walking in circles without aim, without thought. Norway has become my stomping ground, yet what little more can it offer me? I have seen the tundras to the east and the plains to the south, and I have many times dragged with me the cold from the north to cover all the land until my feet froze and I crushed the ice.

Yet what about the west? Haven’t I never seen anything but sea there? What is the sea but a pond for me to wade through? What if there are other lands, better lands for stomping? This I must see, and this I must find out. For I am big Furax the bold troll, and I can stomp till all the fish in the ocean washes up onto the shores!"

This she spoke, and this Furax heard, and he took it for the thoughts in his own scraggy head, for his thoughts were indeed very noisy and echoed about a lot in there.

And so Hyssa jumped out of the ancient troll’s ears, and ran to her kin.

“Go hide in the mountains! Get far away from the sea!” she ordered, and most of the trolls obeyed. Yet some refused, and wished to see what plan she had hatched.

And so big Furax the troll rose up and lumbered down to the sea, and waded through it. So tall was he, that he still towered above the sea when out deep into it, and all the fish and whales in the salty waters fled at the approach of his warty legs and feet. Far out to sea did Furax wade, yet all of a sudden he stumbled and fell upon an underwater mountain top!

Furax went down with the force of a thousand mountains crashing through the air, and he fell into the wet blue with an enormous thunder and splash. And lo! The sea rose up high, and washed out fast in all directions, showering all shores with waves as big as Furax. And all the trolls who had stood on the shores were swallowed by the giant waves, while those in the mountains survived in their cave shelters.

As for Furax, he drowned, yet his temper ignited and he fumed as if on fire in his wrath over being thus tricked. And he cracked and he fissed and he hissed as the sea took his life, and to this day his carcass still burns inside with his last trembling anger, and sometimes it shoots out great flames and ash clouds, or shakes the land and waves mightily. And this land is Iceland.

That, sir, is an excellent story!

Excellent, its a pity that they probably won’t pay up.

Oh… and trolls have tails? You learn something new each day

In Scandinavian tradition trolls are often depicted with tails, at least from the 19th century onward (unwanted trait for fantasy trolls as in Tolkien/Warhammer, though): 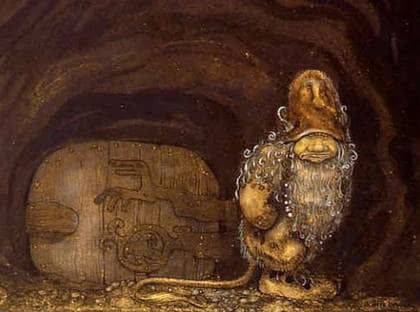