The Fantasy Football Pro Box accessory is a portable case containing everything you need to play Fantasy Football games. Two teams, a wonderful stadium with its field and bleachers, magnetic scoreboards and markers, foam trays to transport your miniatures and transforming into benches when in play, dice... All of this so easily folded and placed to fit in a box!  And that's ony the beginning so please help us develop this exclusive product! 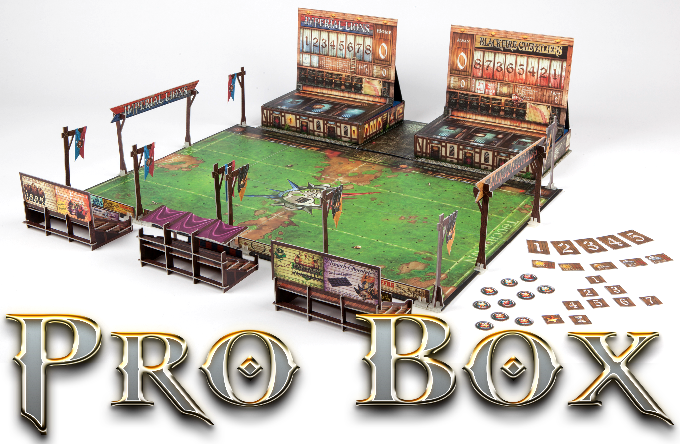 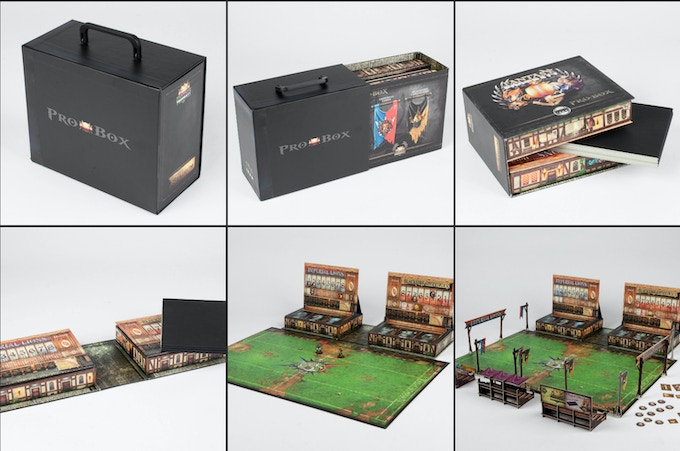 They even have a premade Chaos Dwarf logo, if you order a custom mat and don't want to design the logo:

It looks good, although I’d be weary of spending much on Blood Bowl with the new edition coming out, in case something on there changes

Not sure if new official Bloodbowl rules would be a good thing currently or if they decide to include Sigmarines or any other scalecreep SciFi miniatures with funny lawyer-aproved names (Orruks instead of Orcs etc). Would be a nice thought experiment to design an Age of Bloodbowl two paragraph “rule” set though, with an Age of Sigmar deployment phase

Anyway, it will come in about a year, and the current rule set is working now and in the future.

Don’t forget the human and dark elf teams in the box, they both looks super cool! Id prefer them before the stadium actually.

We have bough pitches from FF-Fields before, great stuff and good quality! I can really recommend them.

It looks good, although I'd be weary of spending much on Blood Bowl with the new edition coming out, in case something on there changes

I can't see them changing too much to the game. Blood Bowl har a much stronger and coherent community than WFB had/has. With the NAF and alot of international tournaments and don't forget the digital version as well. If GW should mess up their "new" version it would just be considered like Mantics Dreadball. GW hasn't touched the game in many years and will have to work hard to deserve the trust of the players again who really learned how to get on well without them. But rules and models wise. :hat off
Abecedar 19 April 2016 07:18 #6

I for one thought of having stadiums and all would be nice, but our little league disbanded before it got very far.

There’s an official Facebook page up already, for the forthcoming new edition of Blood Bowl: Redirecting... They’re still using names like Orcs (no silly Orruks) so it looks like they’re not going to AoS it, thankfully. They even have a picture of the new Orc Thrower - the face looks wrong, not very Orcy at all IMO, but the rest of it looks quite nice.

I keep meaning to make my own Blood Bowl stadium, and the new game might give me an excuse to do just that. If and when I do make one it won’t be a shoddy/tatty cardboard thing, though. Count me out of this Kickstarter.

I’ll be following the new game very closely, but if it’s just another reprint with new models, I won’t bother with it - already got four pitches and eighteen teams, I don’t need more; the new pitch will be plastic, but that alone is not enough to make me part with my cash. OTOH, if it’s a re-make or entirely new game… let’s just say GW haven’t exactly convinced me that they have anyone still working for them who can improve the Blood Bowl rules, so I will be approaching with extreme caution (but a certain amount of hope).

I still have my original pitch and dugouts, but my word that looks nice! I’m sorely tempted.

Just for the record: This kickstarter ended successfully at about 60k �,�, with a.o. covered tribunes, dice tower and a couple of miniatures unlocked. They consider making a second board as an add-on.