Finally I am able to start my own CD army and I will post my WIPs and finished projects here. I am currently waiting for my first few units to arrive in the mail. I just finished cleaning up and priming my first 5 big hats and painting will begin tomorrow. I am expecting the Chaos Dwarf 5th army book, bolt thrower, wolf riders and some new paints and supplies. My Imperial Guard palette isn’t going to work here.

Bold and bright colors will be the theme. 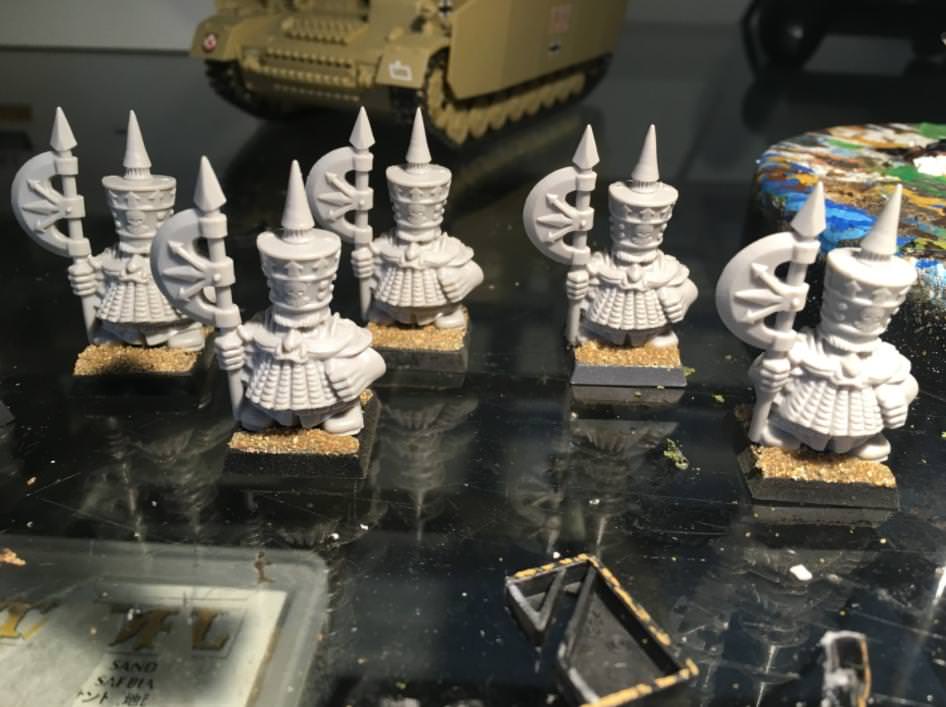 Good for you. Is that some conversion fodder I see in the background?

Big Hats and bright colors are always the perfect start to a proper Chaos Dwarf blog  :hat off

(my apologies and condolences to you helm people out there)

Is that some conversion fodder I see in the background?

I was thinking the same thing, looks like an Afrika Corp Panzer IV?

Good for you.  Is that some conversion fodder I see in the background?

I’ve almost finished my first Chaos Dwarf! It was very difficult to paint compared to what I am used to. I mostly paint Guard and Skaven, neither of which have very straight lines and ornate details like the Chaos Dwarfs. It was fun though and I will try to improve the next few. I noticed that under the skull is actually a beard so it doesn’t make sense that I painted it white, and I need to go under the nose with the mustache. 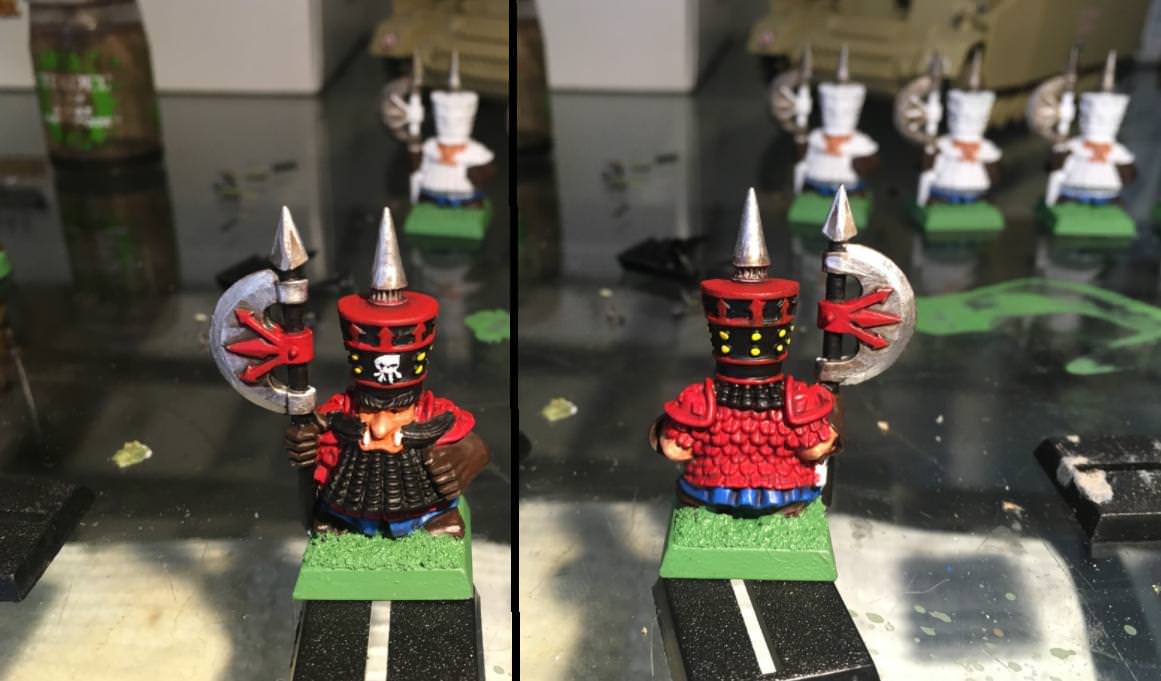 I also got the spear chukka and some green stuff to try out, I hope to try some conversions soon. This resin kit has really beautiful details and has been cast quite well. 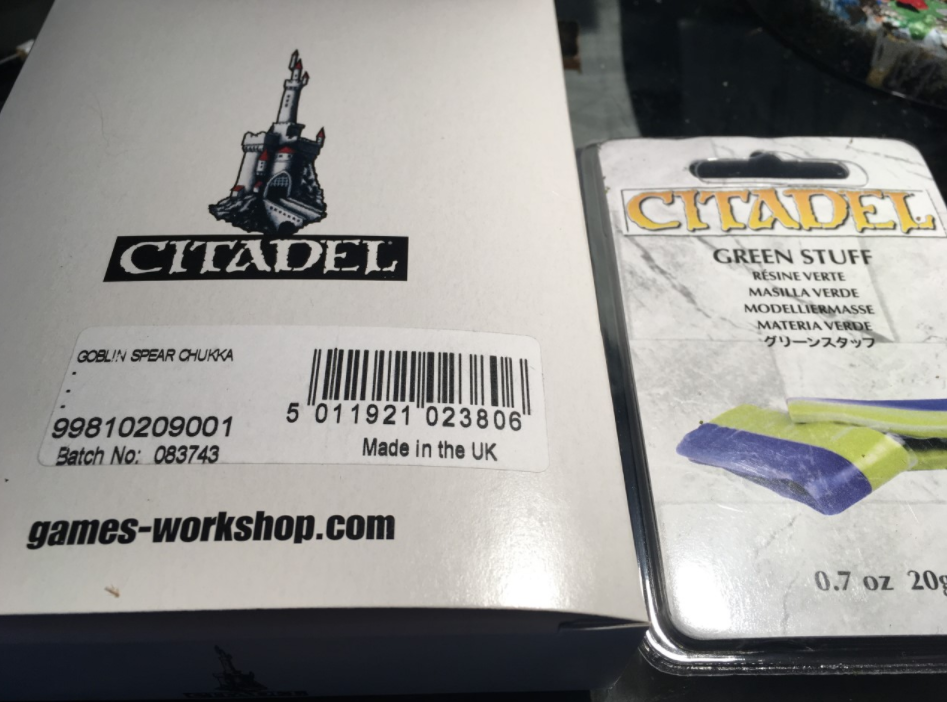 Last part of this update is a small block of slaves. These are from skull pass and where painted some time ago. I’ll be doing some touch ups but they are mostly done. 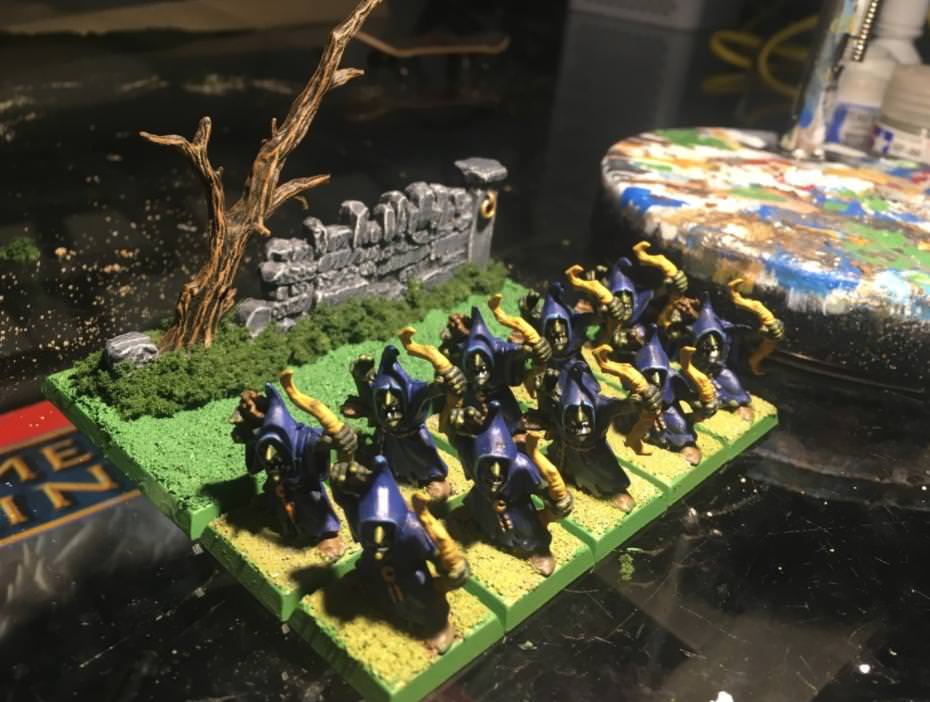 Thanks. I think I need to pick up a lighter shade of red to make things pop. I thought Mephiston Red would be a little brighter than it actually is.
system 12 April 2018 10:49 #8

Thanks. I think I need to pick up a lighter shade of red to make things pop. I thought Mephiston Red would be a little brighter than it actually is.

I think mephiston Red is a good color, but you Just Need some more shadows. Try a wash on the armor  with a diluted dark brown (or One of the GW pre-made) GW washes. Then re-touch the tip of every scale with mephiston Red. This should already make the scales look deeper and well defined. If you want,a tip of Orange added to your red should make a good highlight color.

Is not about the color itself, but about the lights and shadows you Place next to it!

Anyway, looks great,and very clean as a start, especially if you were not used to Paint. straight borders and details. Those old style CD looks very great when painted well, and they would be Amazing once you finish the whole unit.
system 12 April 2018 03:33 #10

A great start to the army! love to see the classic big hats!

I concur wholeheartedly with HPN’s wash and highlight advice, although rather than highlight each scale by hand I would personally just do a light dry brush to pop things back out.

Thanks guys, I appreciate the suggestions and I’ll try it out.

A great start to your army and I am really liking the bright colors style you are using similar to the original studio color schemes. As others have already mentioned, some highlights/lowlights will go a long way to really making the colors pop. I would also suggest some small nod to the brighter color scheme on the slave unit to help tie it into you army color scheme. Great job and look forward to seeing where you take these. Cheers, JR

I have been putting in a ton of hobby hours this week and it’s been great fun. This morning my army book arrived, I am so happy to finally have this in my collection. Looking at this stuff online is one thing, but holding a physical copy is so much cooler. Endless inspiration, no internet required. 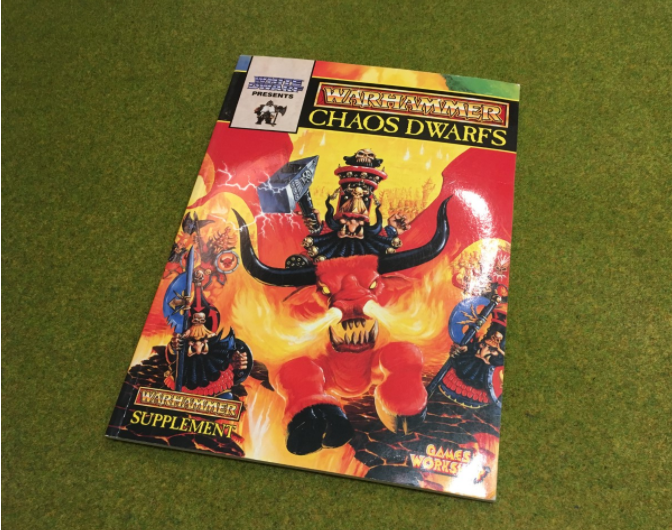 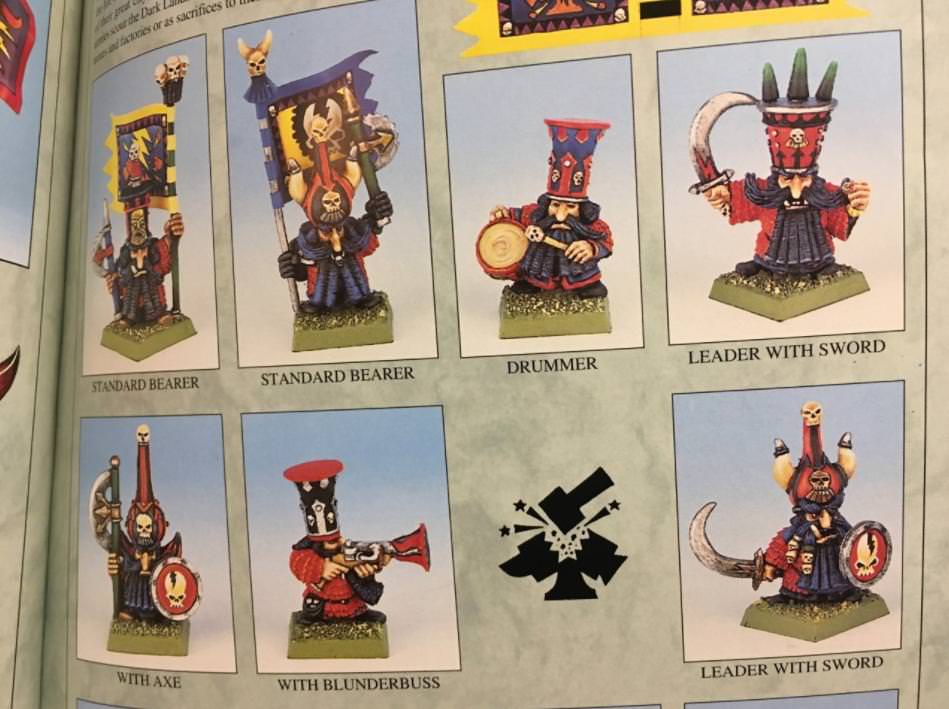 Started working on my bolt thrower, turns out painting goblins is a ton of fun, and these resin minis are just stunning. 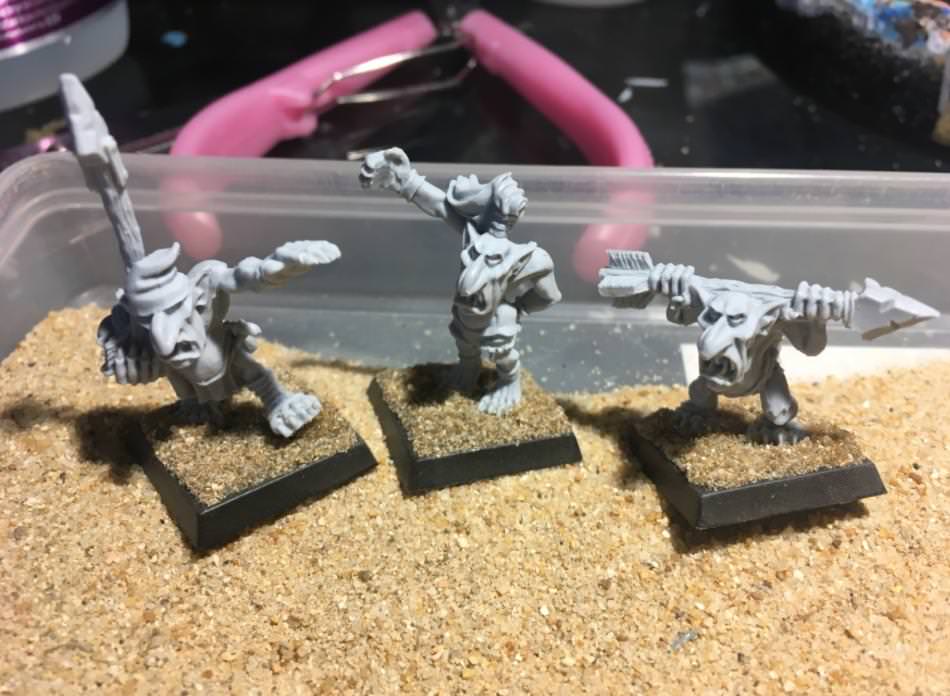 Basing it on a resin base I got from secret santa last xmas on another message board. 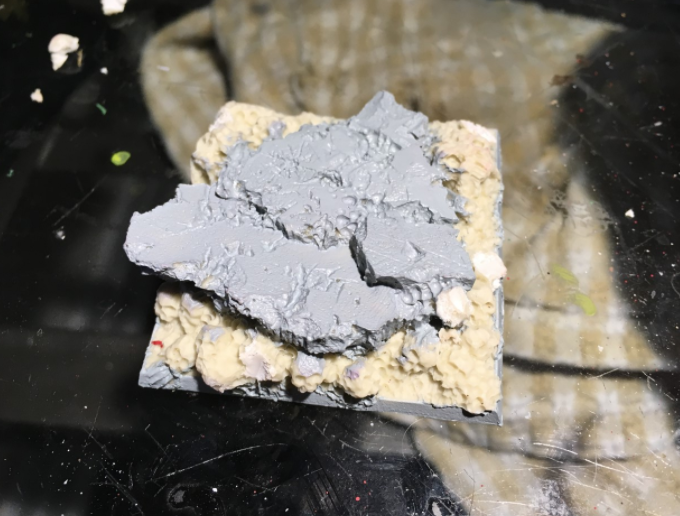 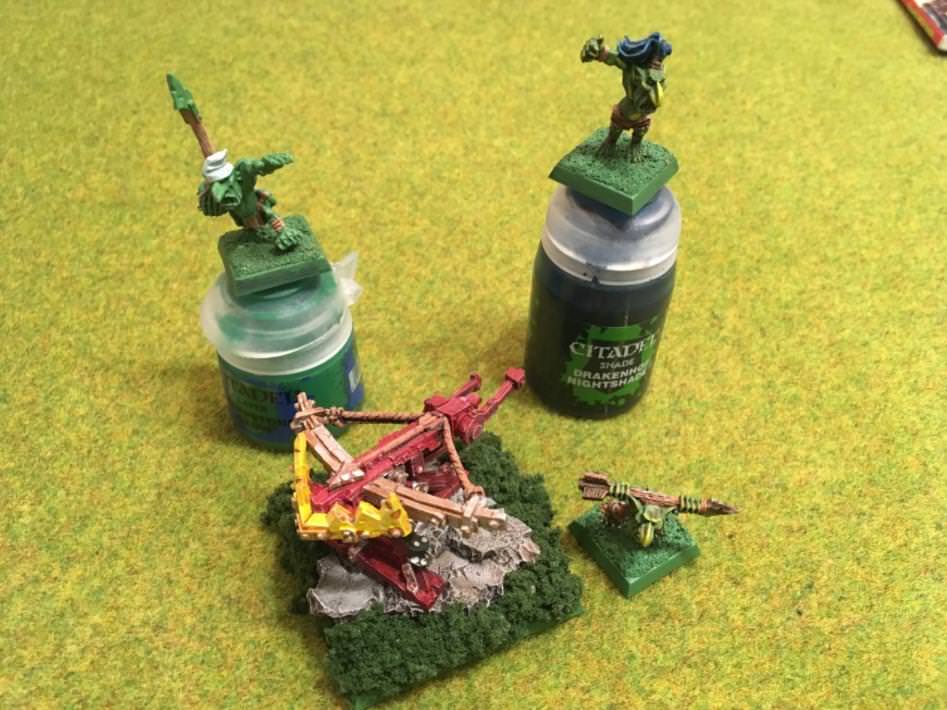 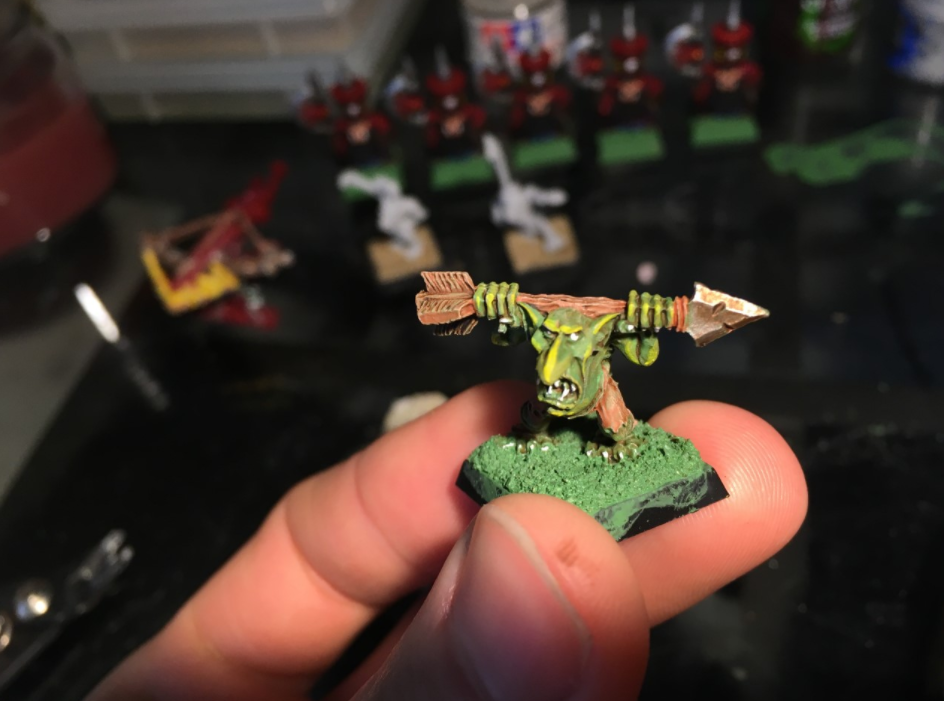 These are base coated and shaded but still no highlights. I think I will go with wild rider red to dry brush the scales, and edge highlight the hats and shoulder pads. What do you guys suggest for making the skin and beards stand out more? 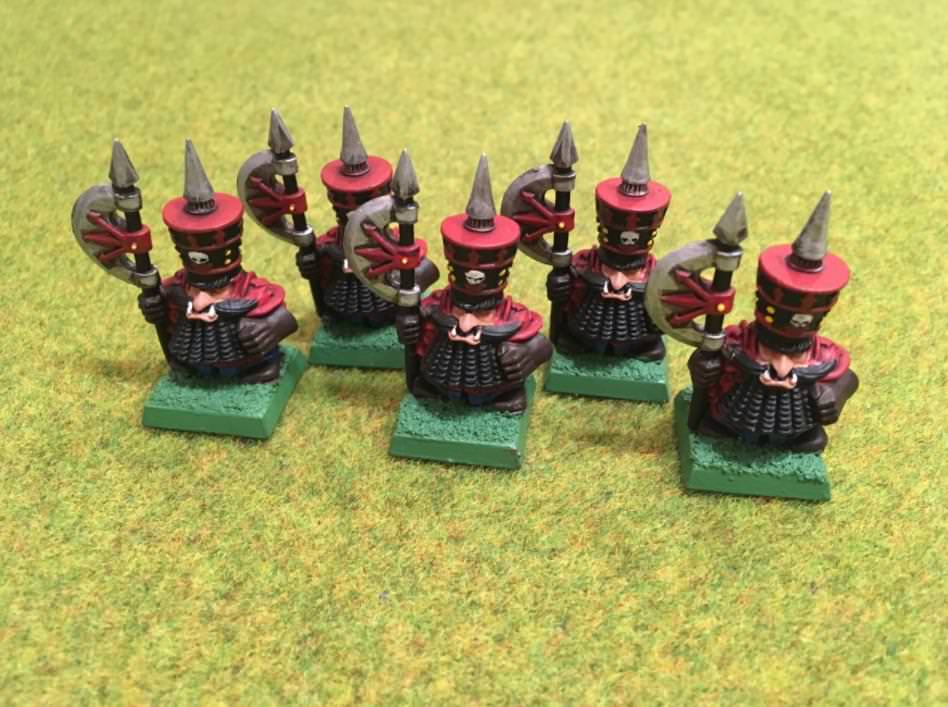 Great big hats. They always look cool and yours are classic and lovely. I am also jealous of you bolt thrower and I agree goblins are fun to do.