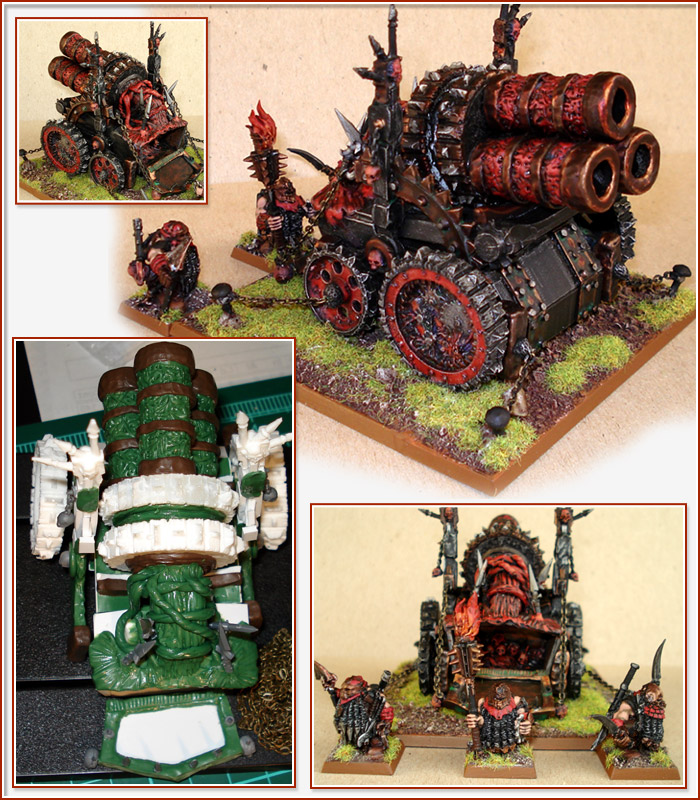 Here’s a build for my Triple Barreled Hellcannon using all 100 points of Daemonic Upgrades.

Interestingly, I didn’t use a single Daemonic Upgrade that I used for my Kollossus. Nifty.

I was going to say you can’t take Sentient Amunition with Doomfire, but apparently you can! I don’t know what that would represent when combined with Doomfire (shooting actual Daemons? I don’t know…) but hey, no worries.

My build of this would have used Collossal, simply because a Hellcannon is Collossal, and this is at least as big.

Also: you should call it the Daemonhammer Cannon, 'cause that’s what I called it when I entered rules for it in the Artisan’s Contest

I’m also starting to think the Daemonsmith is too much of a no-brainer too. It’s like, why ever field a Daemonic Engine without one? Rampage and the rough Misfire chart are one of the few things keeping Engines sane, and a Daemonsmith is just too cheap a way to circumvent that. I think I need to give them a points hike.

Either that, or take away the leadership re-roll. That function can be performed by BSBs.

Which is probably something I should clarify - the BSB shouldn’t give a re-roll to Rampage tests. No amount of flag waving is going to stop a bound Daemon from raging out of control.

Yeah, I forgot that BSB allow you to re-roll all Ld tests in 8th. Inspiring Presence shouldn’t work either.

Thankfully, they both work in Warriors of Chaos.

I know, I just looked that up myself. Kinda dumb when you think about it…