I know this has come up before but over at TGA there is a guy planning a Malal Hashut alliance. I have also been pondering this.

So thi is what I wrote

Ok . There is quite a bit over at chaos-dwarfs.com

here is one old link

there is a lot more too if you search

I had been thinking of a Hashut daemon army myself. It is going to be counts as nurgle ( if interested why look up my blog on cdo)

here is what I was thinking

Hashutlings count as nurglings: There is a guy at cdo Tjub ( awesome﻿ blog) who sculpts and casts 15mm big hat cds (sold at admiralty miniatures). He does some without big hats but with skeleton masks I think 6-7 of them plus command would be awesome. Or if you preferred steampunk someone suggested epic scale killercans

For these I was thinking mantic lower abyssal horde. They do a version with fireballs for hands. So shorten legs and arms, bulls horns, reduce chins (you�?Tll see) and big beards or flaming beards?

Beasts of Hashut counts as beasts of Nurgle I was thinking flaming Shedu (leave a trail of Fire). Shedu were traditional ?babylonian? Monsters, bull body but head (only head) of a horned﻿ bearded man. Not sure what to use as bodies, possibly bulked up chaos knight horses or for steampunk use juggernauts.

plague drones: still thinking on this

Soooo what do you guys think?

Ideas on greater daemons or counts as plague drones

Don’t know about counts-as, but conversions are the good way to go, including the use of Lammasu heads, etc.

I’ve started a few conversions along the lines of a Daemon servants of Hashut: 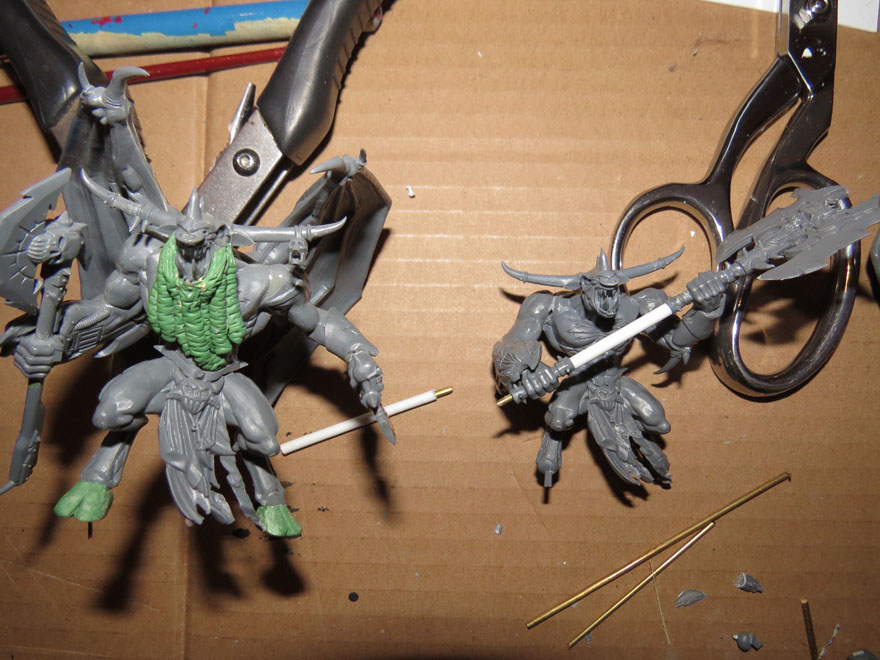 These guys are based on a daemon prince, Minotaur hands and head. 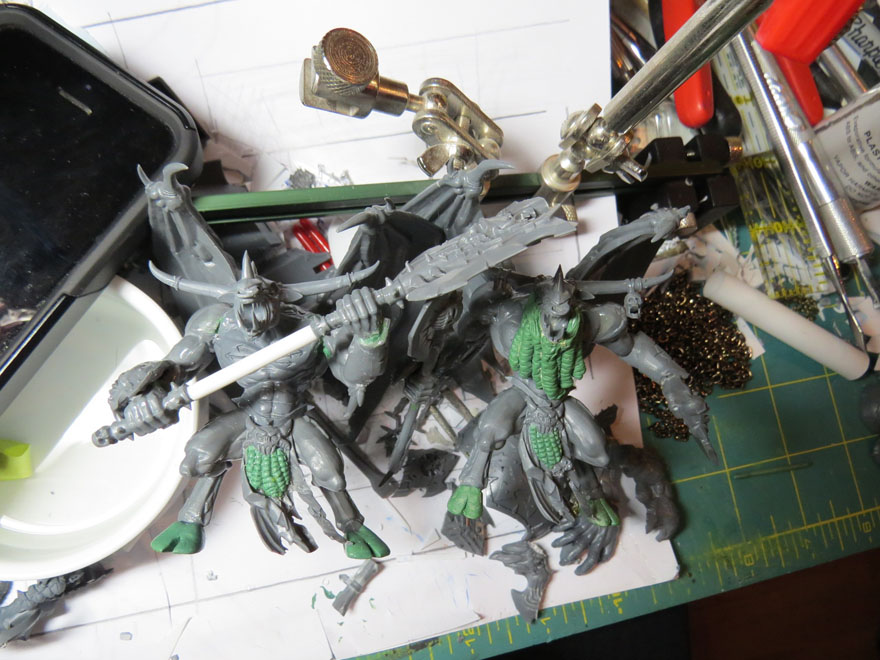 This one is larger, based on a Chaos Giant/Ghorgon, and some other Chaos weapons. 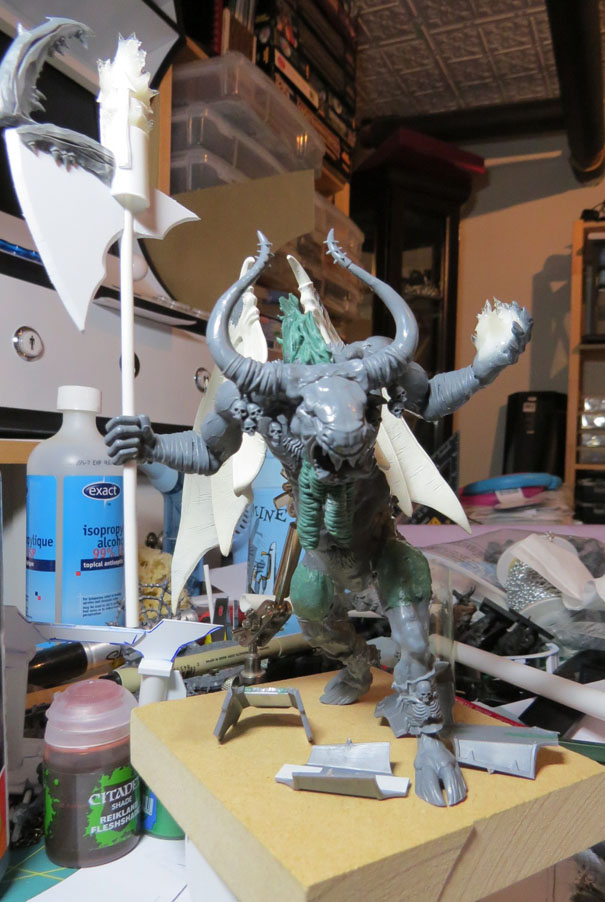 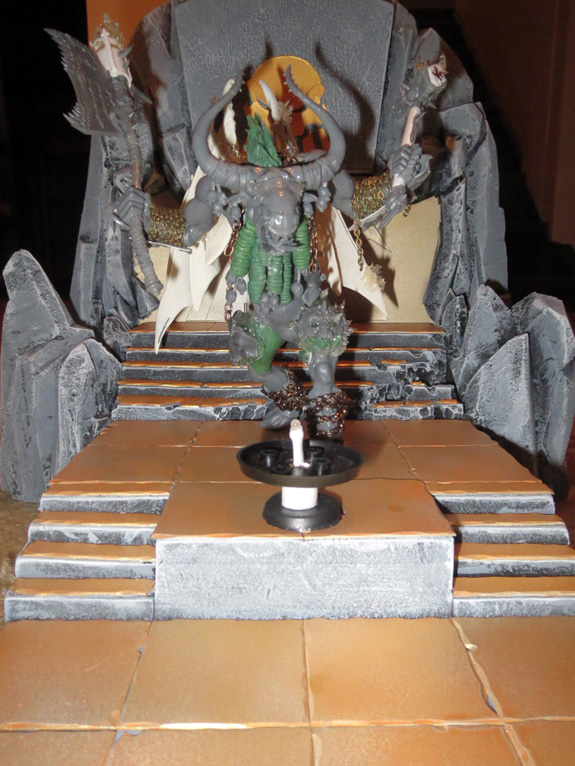 Nice ideas and conversions, Uther and Nicodemus! Can’t help with counts-as, but will try to share some things that might help inspire conversions.

First some input from historical Mesopotamian mythology’s demons and modern reinterpretations based on them. Anything based upon them would likely work better with bat wings instead of feathered wings: 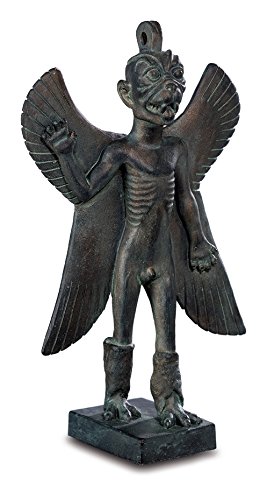 Pazuzu, king of the demons of the wind. 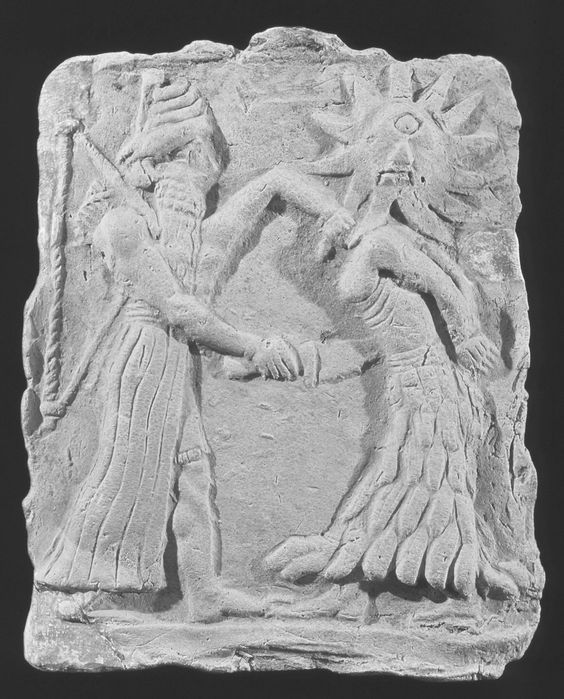 Mesopotamian terracotta relief circa 1700 BC, showing a god cutting a one-eyed female demon down the middle. Rays come from her head and her hands are tied behind her back. God and demon unidentified. Perhaps a cloven Daemon with fire for its head and a cyclopean eye?

Amulet with a figure of Lamashtu, a demonic divinity who preys on mothers and children.

Asag to the left, a demon so hideous his presence alone makes fish boil alive in the rivers, accompanied into battle by an army of rock demon offspring. 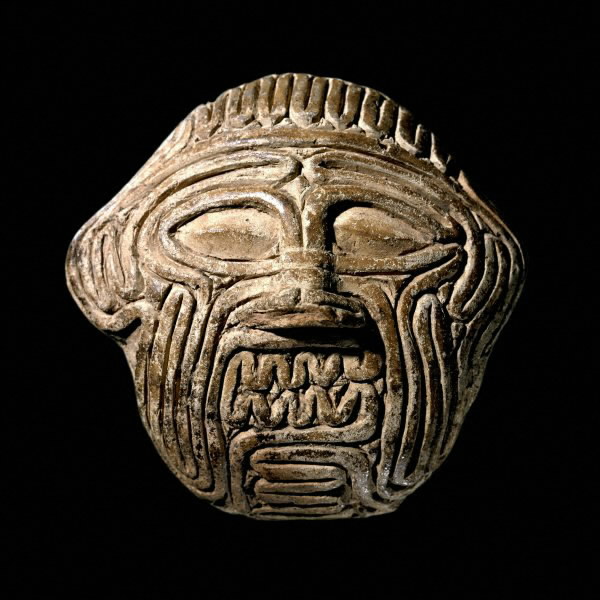 Humbaba, guardian of the cedar forest from the Epic of Gilgamesh. Here depicted with intestines for a head instead of a lion’s head. 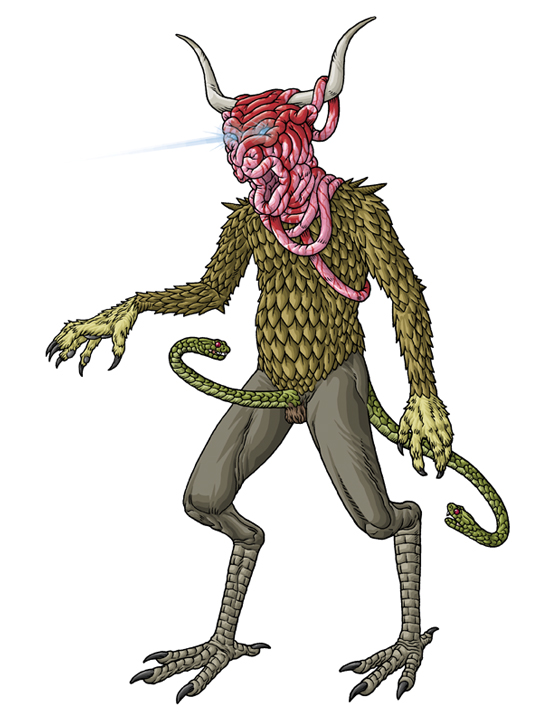 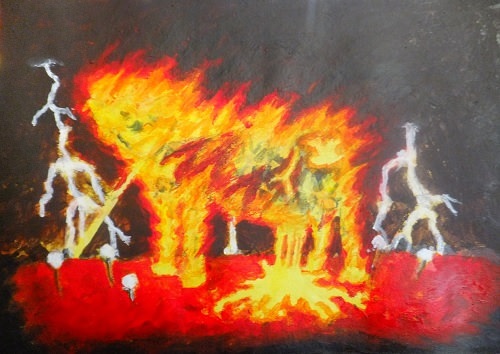 Mazhkra the Leaden Trampled, from the Shackled Consorts of the Bull God.[/align]

One theme I’ve tried to carry across in my own writings, is that of the Shackled Court of Hashut, a Daemonic gaggle of broken spirits chained to the overbearing will of the Father of Darkness. While a minor Chaos deity, He who is Hashut consists of a boundless hunger for power and a ravenous desire to subjugate and dominate, possessing a virile cruelty and fiery temper of fickleness and unforgiving brutality that is to be truly feared.

What follows are glimpses of Daemons under Hashut, as well as non-Daemonic subjects that could nevertheless inspire Daemonic conversions: A molten gold Daemon idol punishing a smith who cheated the Temple of its due. Treacherous Daemonic vassals under the heavy yoke of the Father of Darkness. The First Soulfurnace, brought about by a commandment to enslave and break the Daemons of other Dark Gods. A fiery bastard son of the Bull God. Next, the first and allegedly only Chaos Dwarf to achieve Daemonood, yet heretically so not under Hashut! Hunted down and broken into the K’daai Oracle of Daemon’s Stump after a massive bloody ritual. The Grim Fate of In’kari the Damned, a tale all about a once mighty Daemon falling under the cloven hoof of the Father of Darkness. A sacrificer asking advice from an Oracle Fire, cousin of K’daai. The Breaking of the Three Spellkeepers, where Hashut defeats three independent Daemon Princes, breaks and reforges them into Daemons more akin to horned cages and fanged strongboxes than any kind of mortal creaturs (He then out of jealousy locks away magical Lores in them, but ultimately fails). And speaking of greed and treasure chests…

Less related to Daemons of Hashut, but possibly of inspirational value: Beloss’ excellent the Acolytes Progress, and the Four Slanders of Hashut, where the true worshipper of Hashut shows who is boss to apostates and cursed deviants. Fuggit Khan cutting to the core of Chaos Dwarfs, in the Will To Make Power Over Life. Revlid’s On Daemon’s Stump. Hashut in the guise of the Great Firebull and the Great Thunderbull respectively. Stonecarved idol running amok, and a Stone Golem dissatisfied with its mortal creator. Likewise with a Daemonforged Golem. Metals arguing and items of subjugation arguing. And lastly connection to Minotaurs and volcanic power.

For plague drones you could have some sort of hellbat thing where you could take vampire counts fell bats (don�?Tt know if GW makes them anymore) or just any large bat (similar to size of a plague drone) and try to put tiny bull heads on them kinda like the Babylonian lion fish just with… bullbats? You could also green stuff fire on the wings to make them more flamy. Just an idea that poped into my mind.

OK where have we got to

Of course for Khorne flamebringers would do as well as bloodletters, bull headed juggernauts as juggernauts, a flame cannon for a skull cannon is easy for cds, Daemon prince and greater Daemon would be the same. Flesh hounds I see as flaming shedu using chaos knight horses as base models

Not sure for counts as Tzeench or Slaneesh

For some fan fluff on minor gods try this

Very interesting ideas, I’m a big fan of the bull-bat concept too

I’ll be needing to source out some appropriate 15mm demons down the road so I’ll be keeping this thread in mind for inspiration!

Very cool idea. Not sure I’m entirely down with Hashut as a direct Chaos god just yet but it its a scenario that has both pros and cons.

The main pros I see is that it will allow daemons and more easily explain the relations between Hashut and the Chaos powers, mutations, use of daemonic things like the Hellcannons and so on.

The main con I see is that it will make Hashut very defined and not really standing out, and its a bit wierd to have this lesser Chaos god when lesser Chaos gods seems to have been written out of the fluff. I kind of like the mystery that’s about Hashut in that he has some form of relation with Chaos, but its hard to nail down the exact nature of it.

I had a go at making a demon prince of hashut type character on heroforge a few years ago. Put off actually buying it so far because the scale will probably be pretty small and the quality is always improving with these 3d printing services but I’m pretty happy with how it looks. It would make a cool demon unit if you got a few different poses.