Just a quick heads up that my range of Evil Space Dorfs will be up for sale in the Oakbound Games store (http://www.propworkshop.co.uk/oakbound/miniatures/) rather soon(ish) a couple days or so. 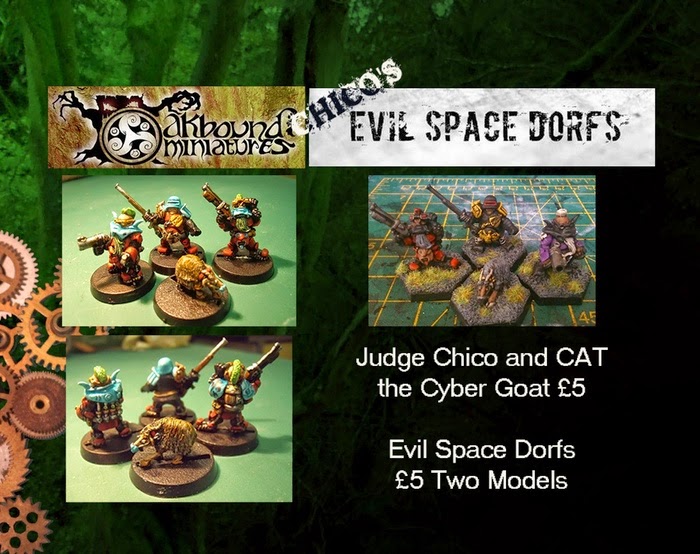 Full project including concept and greens can be viewed here:

I have have a few sets for anyone short of cash and wishing to trade for a set.

But they are looking quite nice. Will give them a chance when they arrive in the shop.

@ Chico: BTW, good to hear you are still painting!

I think they say dorf and cdorf In the online blood bowl community, could be wrong though. They have an old chaos squat feel.

Heh the reason for Dorf is simple, in GW Retail around late 90’s early 00’s when I worked for the Evil Empire there were alot of slang terms floating around (Ultrasmurfs anyone?) and Dorf or Dorfs were one of them and it’s just stayed with me since. It’s even wormed it’s way into various usages such as the Blood Bowl mention above.

As for changing the name for a few German speakers… well all I can say is Ha! Enjoy the Villages

Only in southern Denmark would people understand it. It’s not a real danish word.

As for Squat-like I’m/we are trying to stay away from the whole Biker or heavy machine loving Space Dwarf image and are heading down the quirky/funny/steam punky route with the likes of a Cyber Goat and a Judge Dredd parody Dorf.

These are just the first 4, with the funds these mae going back in to expand the range further… Pirate Dorf with silly hat and tentacle (Heh auto correct wanted to put that as testicle :O) beard? Steam powered Cyber Berserker? Gimp like Imps and so much more.

Enjoy them for the sillyness they bring

Though I didn’t own any 40K models I like them (even with this quite strange name :D). Some more of them and you have a quite cool mercenary crew!

These are now for sale Via the Oakbound Store: http://www.propworkshop.co.uk/oakbound/miniatures/

Limited stock of 24 sets, so best be quick my good fellows.

As the start of the Evil Space Dorf range has been out now for a short while it’s now time to reveal some of their background fluff.

Oldhammer on a budget: Evil Space Dorfs: The Awakening Pt.1

Nice Cthulhu-like head… I always liked the squat, will you also be making terminators?

By the way… where does the term Dorf come from you ask?

Hi. I'm Dorf, your date for the evening. - YouTube

Nice Cthulhu-like head... I always liked the squat, will you also be making terminators?

Second helmet done. Two views, either side of the central ‘Peacekeeper’ helm, of the ‘Bughunter’ helmet. These will go into a mould to have resin casts taken of them. I’ll then work on top of these resin castings to produce a few different heads.