Admiral asked for introductions to various game systems. I once did one for T9A in German and will translate it and add some evil-stunty-specific text.

First of all: Evil dwarfs in the IX Age are called Infernal Dwarves.

The first 4 posts in this thread are needed for my introduction.

Personally I play T9A as my main system since version 0.99, this is some years ago now. At first I tried with Vermin Swarm, then I switched mainly to Infernal Dwarves and now to Warriors of the Dark Gods (but slowly building some dark dwarves in a hidden chamber, hehe :hat).

Please excuse grammar mistakes a.s.o. as I am no native speaker.

Fantasy Battles: The Ninth age (T9A) was founded by leading Warhammer Fantasy tournament players after Games Workshop ceased to continue Warhammer Fantasy in its previous form. It is a complex Fantasy Tabletop game in a fictive fantasy world, fully developed by volunteer contributors from the community. Each player leads an army of a certain realm or faction of this world in a battle against another players’ army. Rules are for free and can be downloaded (see Links & Resources). Each player needs some dice and miniatures in the 28-32 mm scale, from companies of his/her own choice, to represent the army. T9A uses square bases with a certain size which is mentioned in the rules for each unit entry.

The armies are mustered before the game by the players under certain conditions, especially an agreed maximum point size. This maximum point size (standard 4500 points per army) represent the power of an army. You can “buy” units, heroes, monsters, etc. from the army book of the chosen faction. The point cost reflect the game impact of the according unit, monster, war machine or hero. This way the players shall have roughly equal chances in the game (external balance).

The armybooks, for example Highborn Elves, Warriors of the dark gods and certainly Infernal Dwarves are intended to reflect the character of the faction ruleswise, too. Priorities of a faction can for example be in magic, long range shooting, close combat, durability, mobility, and so on. In addition the army books shall allow many various army builds which are roughly equally powerful (internal balance). Players have much influence and many decisions to make in this game, both when creating an army list and also during the game itself. The thinking behind, and the testing of army lists and the long term construction of an army hobbywise can be a very rewarding process. 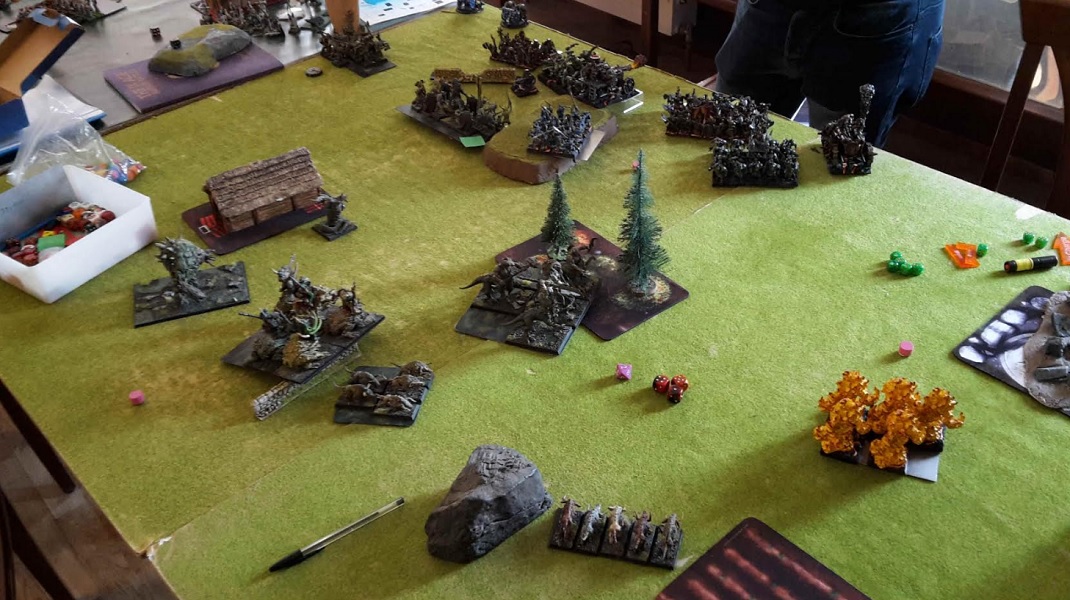 T9A uses six-sided dice. An archer for example can need a 4 or more to hit his target. Sometimes more dice are used at once and sometimes it can also be better to get a low result with the dice (such as for Discipline tests). A core element of the game is the movement of the units/models. This decides each side’s advantages and disadvantages for later combats, or is critical for fulfilling other game objectives. The game is turn based, this means first player A acts with his army, then player B, etc. Usually capped at 6 turns.

Aside from eliminating enemy troops, the fulfilling of mission objectives is very important. This can for example be the control of a certain terrain feature like a hill or the movement of as many units as possible to the other side of the table. The deployment of the armies at the beginning of the game also varies. There are six standard deployment variants and six different objectives which are determined randomly in the standard rules.

A standard T9A game can often last for 3 hours or longer, although experienced players certainly can play a little bit faster. Playing time can be influenced through the maximum army point size.

There were some rule changes in the past. Most of the big changes are over now and the basic rules are frozen now with Version 2.0, which is also called “Gold”. Nevertheless, T9A is a dynamic rules system and necessary changes are made from time to time. This is especially true for points cost but also for the wording of some rules. Rules should be as precise as possible to eliminate loopholes, and internal and external balance are always under supervision. Some people don’t like this because they can’t play exactly the same list for years on end, but on the other hand the game stays alive and interesting.

T9A has its own world of classic mediaeval Fantasy. At first it was important to have the rules as a base, now more and more work is being done to create an atmospheric background (“fluff”) for the world. You can see the high level of the art and fluff texts in the Full Rulebook and the first “Legendary army books”, meaning fully illustrated armybooks complete with background stories and appealing layouts. The slim version of the books only contain the rules. There are also some very interesting projects to supplement the main army books with Auxiliary army books such as viking �.sklanders and steppe nomad Makhar Confederacy which should interest hobby and fluff players (and also many homebrew ones, which are not at all official). Although only 16 factions are officially tournament valid at the moment, many tournaments still allow Auxiliary armies since they are designed to not be too powerful.

There is also a free online magazine in pdf form which is called The 9th scroll. There you can find community news, hobby stuff, background stories, game reports and similar content, all gathered in a publication done to a professional level.

Get on the train or switch from another train

Despite seeming to be a very large amount of information, the basic rules of the wargame are quite easy to learn. It is best to play a game as soon as possible because it is easier to understand and memorize the rules in games than from just reading the books. Normally, active T9A players are ready to introduce newbies in a demonstration game. Often these guys have several armies to arrange a game with smaller maximum point size. In such a game you can get to know the game principles and you’ll afterwards understand the books more easily. The players who take their time to do this are rewarded with great depth of play.

Certainly it is even easier if you have already some tabletop wargaming experience.

There are also reduced Quickstarter Rules with armylists on the forum. Sadly I have no experience using them, although many beginners have had a positive introduction to T9A via Quickstarter.

Miniatures:
T9A is independent from companies, i.e. you can use models of various designs as long as the opponent can identify the different unit types (this also mean T9A will never produce imbalanced rules in order to better sell new miniatures). Scale is usually 28-32 mm although there are some people who try 15mm or 10mm scale. There is a certain effort involved to buy and build one or two regiments and single models to begin with after you choose your preferred faction. To build and slowly expand your force is a hobby in its own way. It is clever to start small and to add one choice after the other unless you have the opportunity to get a complete army for a good price (second hand). So you can also start with smaller armies (say 2500 or 3000 points) and your model number grows with your playing experience.

Important: Models are on square bases in order to put them into regiments. The base size has an impact on the game and is defined in the rules of the particular unit.

Which army?
Infernal Dwarves are certainly a great army :cheers Models from the Legion of Azgorh list are all playable in T9A as well as some other models like hobgoblin bolt throwers, gunnery teams, Disciples of Lughar (possessed berzerkers on fire) and slave orcs e.g. It is a rather versatile army with a lot of fire synergies and mid range shooting.

Otherwise I recommend gut decision following your tendency towards a certain model or playing style. You can read a little bit in the various forums, ask some questions (e.g. here in this very thread) or even ideally play a test game.

Tournaments:
T9A can certainly be played in your own hobbyroom or otherwise in a private environment.
It is also a very good game for competitive play in tournaments and can be used right from the spot without house rules.
Tournament organizers are always delighted when they see new faces. After playing a few games I recommend visiting or even playing in a tournament in your area. Usually most new players will not win every game at the beginning

but one can learn fast and the atmosphere is normally very friendly.

The most important link is here for free rules.

I recommend using the “slim” books.

You need the rulebook, arcane compendium (spells and magic items) and the army book of your choice.

The “full books” usually take a little longer to be updated to the current rules version but are in the meantime great as a source of art and background. 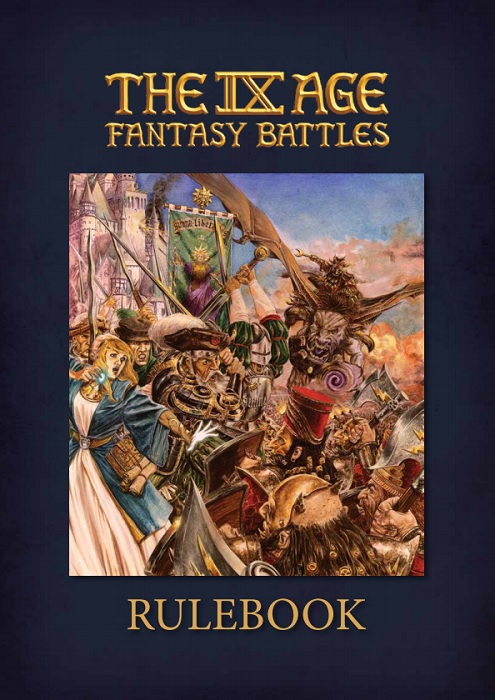 On this page you find also some additional material, sources for army building tools and the free online magazine (all issues), as well as fun new terrain rules for spicing up casual games.

The Ninth Age forum is great if you have rule questions or want feedback for your army lists, a.s.o.

While all T9A rules and other content are free to download, there is also a more polished option at hand: The Rulebook and some other texts are available from Amazon now as printed softcovers for a very low price. Check it out if you like!

Infernal Dwarfs: What unit entry is what kind of model?

I’d like to add that 25mm round bases can generally still be used instead of 25mm squares with a proper grid-marked movement tray for the regiment and some spare square bases for measuring out rare tricky spots), since everybody use movement trays. A friend of mine, Johan von Elak online, once rebased some Bloodletters to round bases. Not for 40k duty, and neither for AoS as this was a few years before End Times. No, but because these models were nigh-impossible to rank up! So he actually played the unit heaped in a pile on a movement tray, on a tournament! And then switched to rounds for the next tourney because it allowed him to swivel them individually into place to at last rank up on the movement tray.

We’d love to see similar introductions to wargames and their evil dwarves for all the games people happen to play. So please contribute your own intros for Age of Sigmar, Dragon Rampant, old Warhammer editions, Blood Bowl, Frostgrave and so on. Check out TheHoodedMan’s work above and Tjub’s intro to 15mm Kings of War for ideas on how to structure and write such a post.

Let’s ease others’ entry into wargames get some new content up for the betterment of CDO. :hat off