The following is a brief overview of the Neo-Assyrian empire and its army. Almost all links below are good video links, which are well worth the watch. 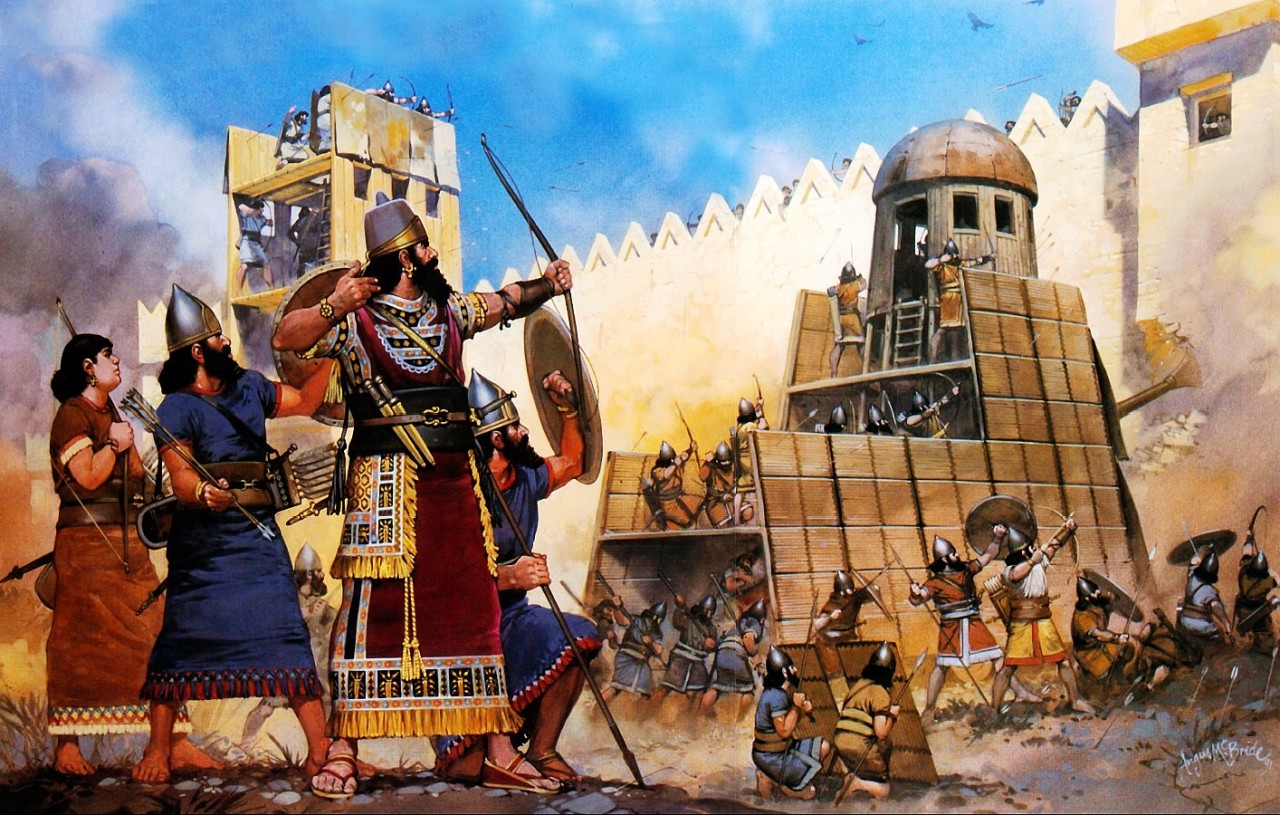 The alluvial plain of Mesopotamia (also archaically known as the lands of Sumer and Akkad) consist almost entirely of silt carried away from the Taurus mountains by yearly floods, with no native sources of metals and little in the way of stone. Mesopotamian city states and empires found themselves both importing such materials (), and conquering regions with precious quality wood (the cedars of Lebanon), stone and metal.

The main sources of nutrition for the people of Mesopotamia were grains (first wheat, then the more salt-resistant barley) and dates, the latter harvested from palm trees. The agriculture of northern Mesopotamia, which included the heartland of Assyria, received more rain during the year and was less dependent upon constant massive efforts of irrigation than was the drier, southern region of Babylonia. The lands of Mesopotamia were originally marshy and subject to violent and unpredictable floods, and required much more effort of digging irrigation canals to tame the landscape for agriculture, when contrasted to the more predictable and idyllic Nile valley. The Mesopotamian outlook on life was markedly more grim and pessimistic than the Egyptian one. Likewise, ancient Egypt was for a long time sheltered from the worst invaders by deserts and seas, whereas the plains of Mesopotamia lay wide open to nomadic invasions from the Zagros mountains to the north and east, and from the Arabian and Syrian deserts to the south and west. 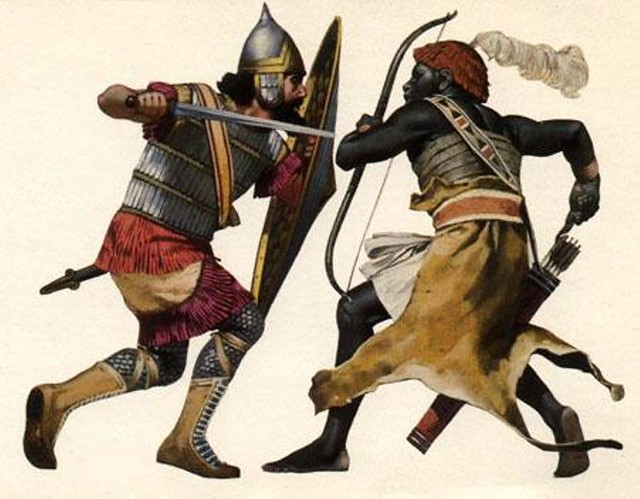 Assyrians battling Nubians for the supremacy of Egypt.

The history of Mesopotamia is as a result a parade of invading barbarian peoples taking over, going native and soft in the rich city-dotted farming lands they conquered, only to eventually be conquered by the next wave of hardy pastoral invaders. Tribal names like Gutians, Amorites, Kassites and Arameans all make up this multilayered history.

Through most of these ravages, one tenacious northern Mesopotamian realm held fast through the turbulent cycles of destruction, and carved out a predatory and martial reputation of its own, to rival any of the great empires of ancient times: Assyria.

Assyria began during the Bronze Age as the defensible Akkadian city state of Ashur upon the eastern river Tigris in northern Mesopotamia, devoted to the god king of Ashur (the god and the city being the same). Assyrian monarchs were always seen as Ashur’s representative on earth, while the war-god Ashur was Assyria’s true king.

Warlike Assyria had a long history from 1900-612 BC, with two eras of greater power and an intermediary episode under Mitanni overlordship. Assyrian abilities and appetites for war were clear already during the heyday of the Hittite empire. This brief overview will focus on the later, iconic period of Assyrian greater power, known as the Neo-Assyrian Empire (900s-612 BC), during the Iron Age.

The reign of Tiglath-Pileser I (1115-1076 BC) saw a revitalized upswing in Assyrian fortunes, with energetic military campaigns in all directions and a slew of grand construction projects. This set the tone for the rest of independent Assyrian history: 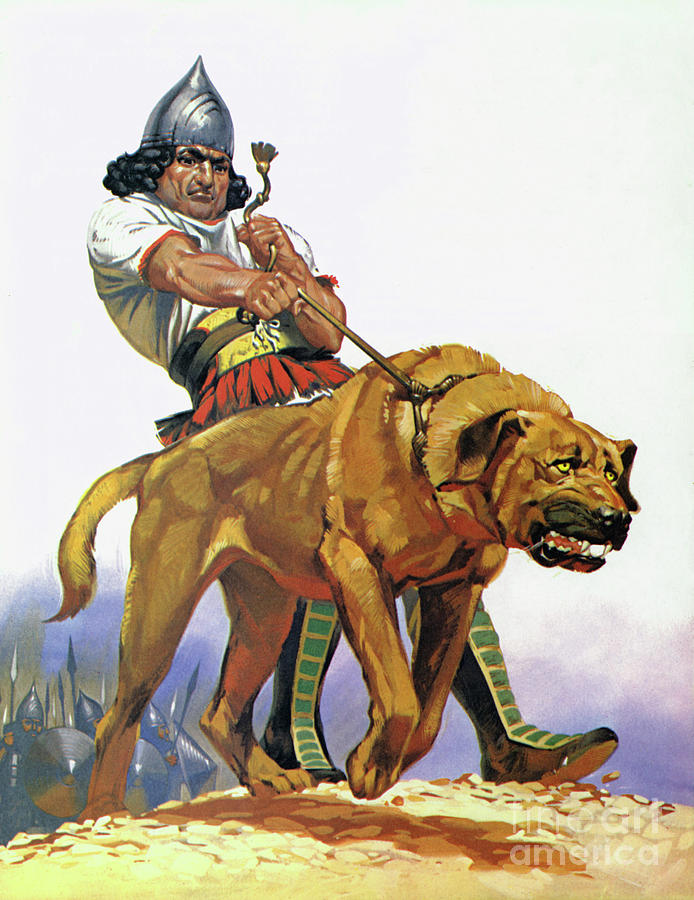 Through ups and downs, kings would march out virtually every year, to defend their lands and attack their neighbours. Enemy cities would be besieged and taken by storm. Countrysides would be ravaged and tribute would be gathered. Foreign kings would kneel as vassals to the ruler of Assyria, and a dizzying cycle of revolts and harsh crushing of rebels at the hands of superior Assyrian arms would play out, with innumerable atrocities boasted about by the Assyrian kings themselves. 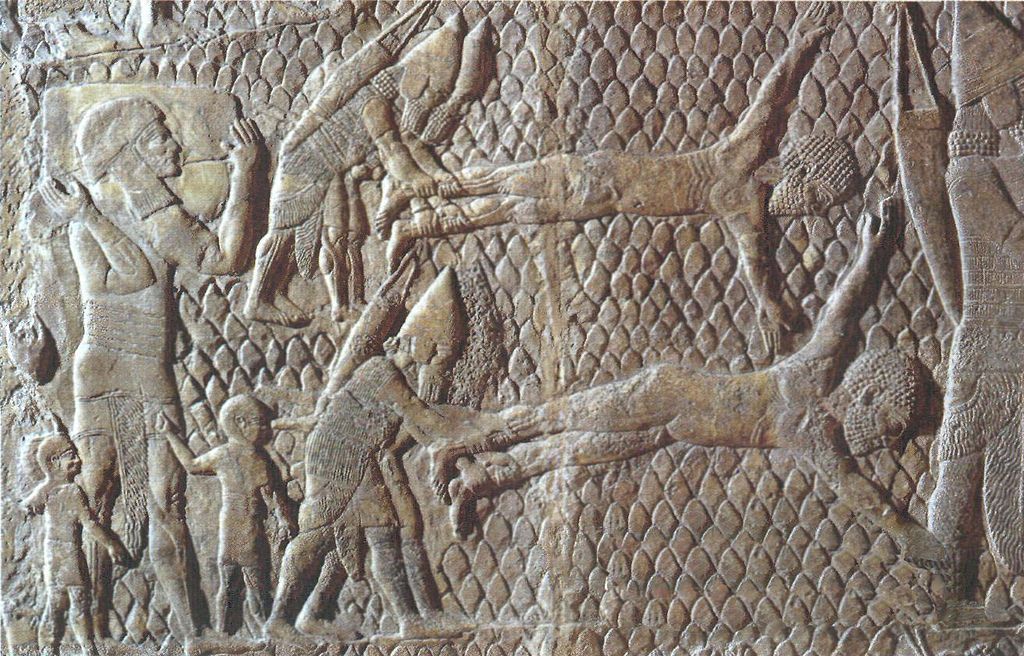 Through this upward spiral of violence and might, feudal Assyria reformed itself with waystations and royal courier networks; siege engineer corps and the first professional standing army ever created. The core empire of Assyria with provinces directly ruled by Assyrian governors made for a compact great power, akin to nation-states of France or Spain, rather than an unwieldy sprawl like Persia or Russia. 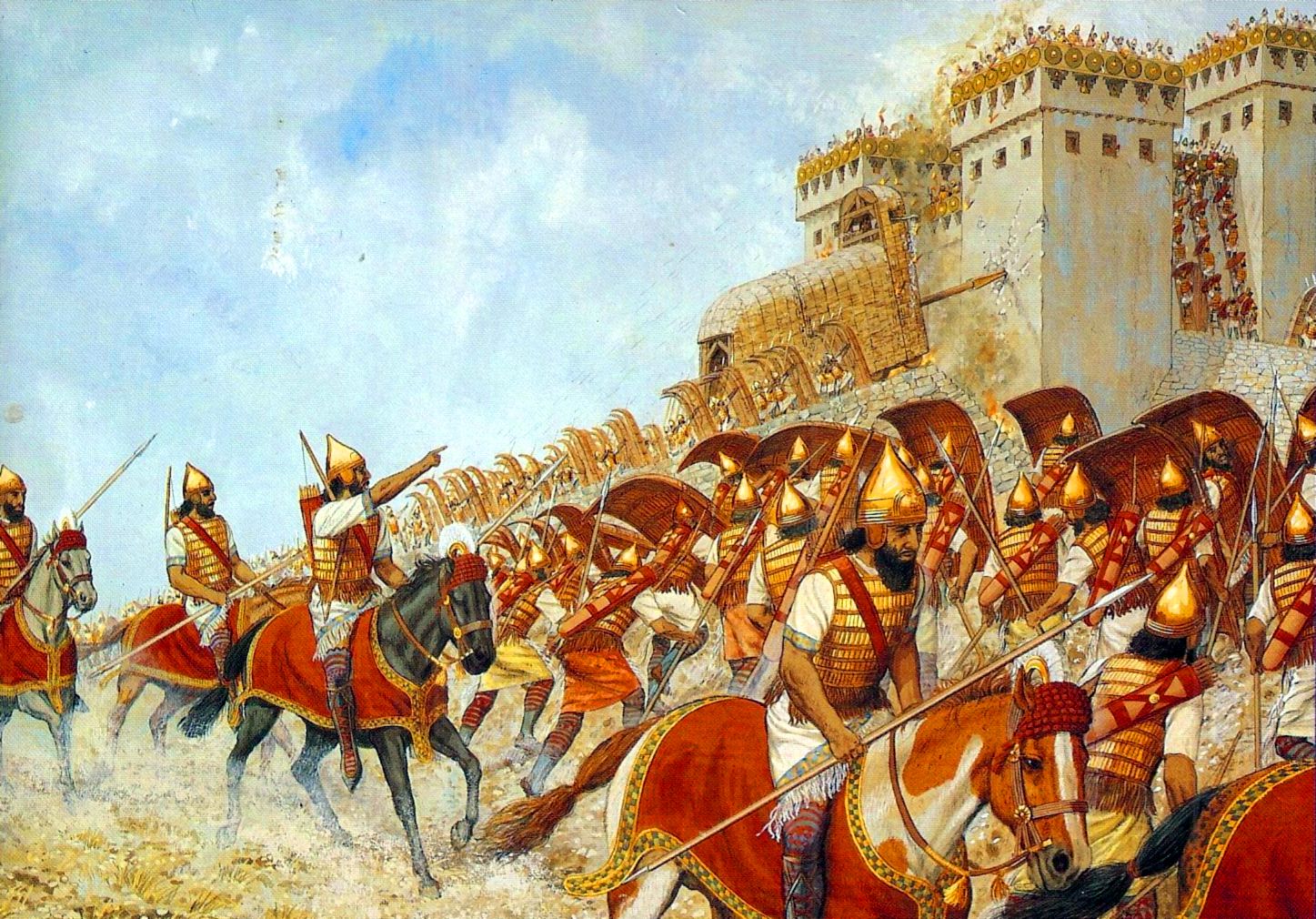 Assyria lacked the manpower to fully subdue its many enemies, and its baleful cruelties made it deeply hated by subject populations and foreign foes alike. Although Assyria did try to assimilate populations within its core empire through deportations, it never won the hearts and minds of conquered peoples as did the later Persians and Romans.

The Neo-Assyrian empire was a child of its times - a predatory imperial state - and it excelled at the martial prowess and bloodthirsty tactics of its age. Yet the methodical cruelties of Assyrian arms would sow the seeds of hatred that would topple the great nation in an astonishingly short period of time, when a time of civil strife opened up a weakness that rebels in Babylon and the rising empire of the Medes would exploit to crush the fine cities of cruel Assyria the great. 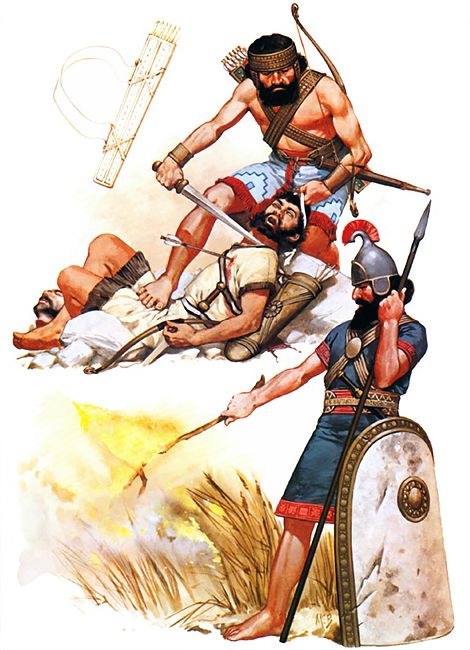 The Assyrian army had long been a deadly warmachine, levied from nobles’ private forces in feudal fashion. Yet it would become the most professional military force ever seen up to that point, when the reforms of Tiglath-Pileser III (reigned 745-727 BC) transformed it into a professional standing army, paid for by the crown.

The reformed Assyrian army fielded a strong core of veterans and regularly trained soldiers, equipped with lamellar armour, boots and sporting a cadre of siege engineers. The Assyrians were capable of rapid long marches akin to those of the Roman legions, and this gritted ability to redeploy and march deep into enemy territory served it well for centuries. Innumerable city states and petty kingdoms felt the wrath of Neo-Assyrian arms, including the Phoenicians, Israel, Judah, Urartu and Elam (Elam was utterly destroyed by the Assyrians shortly before the end of their empire).

The Assyrians fought in the highlands of greater Armenia, in the plains of Syria, in the deserts of Arabia and among the swamps of Babylonia. The army sported inflatable animal hides on which soldiers would cross rivers. 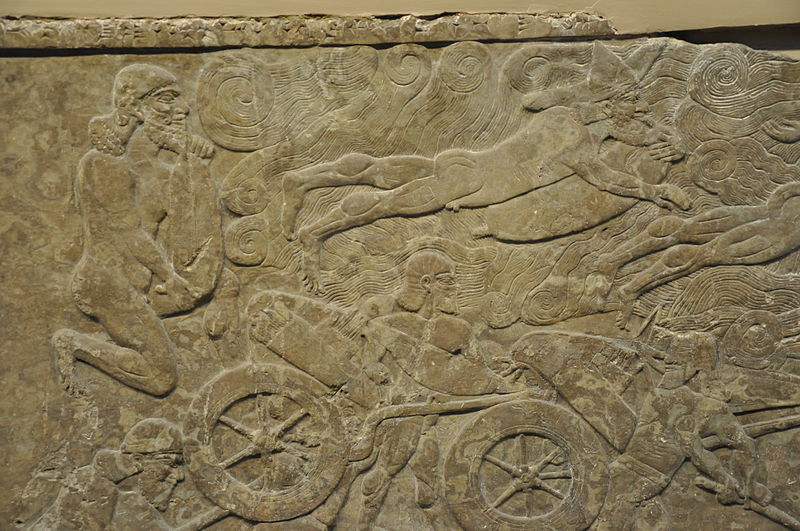 Assyrian relief depicting crossing of river by use of inflated hides. Note the dismantled chariot being ferried over.

The main mode of warfare in ancient Middle East was the bow and arrow. The basic Assyrian army unit was a pair of warriors: One trained archer, and one shieldbearer with spear to protect the bowman, especially in sieges. These were commanded by Chiefs of Ten (it is unknown if the title referred to ten warrior pairs or ten individual warriors in five pairs under this officer’s command) and Chiefs of Fifty. References to Chiefs of Seventy also exist. Slingers are well attested in Assyrian reliefs, but it is unknown if they formed separate units, or just happened to consist of men familiar with this difficult ranged weapon.

The Assyrian army had inherited a long tradition of chariot warfare, which it continued to use to good effect. Charioteers were wealthy noblemen with retainers. They rode heavy chariots with four horses, which could be used for charging straight ahead at enemies. Charging with chariotry likely depended on the enemy being too ill disciplined to hold ranks and fail to produce a wall of men and spears to the onrushing horses.  Most enemy infantry was poorly trained during this period, and a combined assault of chariotry and infantry, or even cavalry could shatter the foe’s resolve. The chraiot crew consisted of the prestigious archer, a driver (who had to keep silent at all times and needed to know his horses well) and two shield bearers to protect the archer. The archer and shield bearers could dismount from the chariot and fight as mechanized infantry, able to jump aboard and withdraw rapidly much like the ancient Britons fought Caesar’s legions with mobile chariots. Assyrian chariot units consisted of only two vehicles, with one lead chariot, and all chariots sported fancy banner poles. Iron Age Assyrian chariots would likely be dismantled and transported on wagons or pack animals during long campaigns in order to reduce wear and tear on these expensive weapon platforms, and then be reassembled close to the field of conflict, as was standard procedure during the Bronze Age.

Assyria was the first settled empire in world history to experiment with cavalry. The invention first came from the steppes, in the form of ravaging mounted archery hordes of Cimmerians, who raided and destroyed armies far down south into the Levant. It is a testament to the Assyrian army’s power and adaptability that it managed to repulse this lethal form of warfare when it was still brand new and held an element of raw shock and surprise which later Scythians, Huns, Turks and Mongols would not fully enjoy. 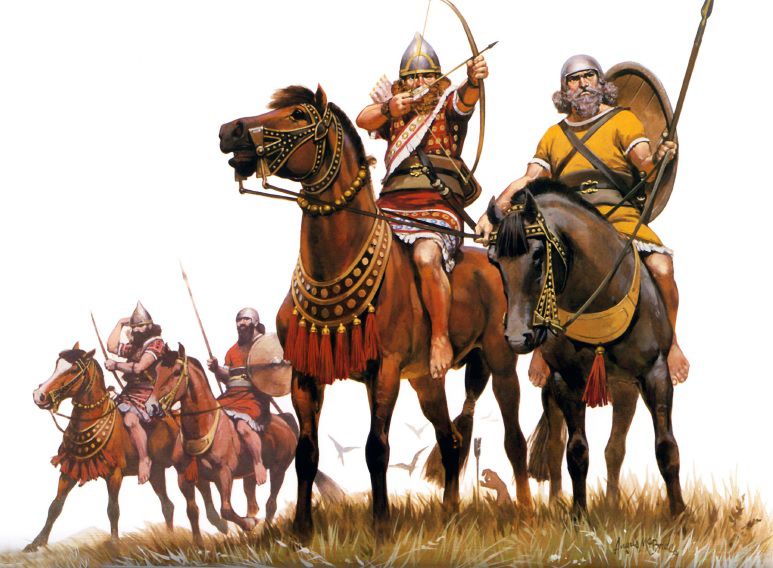 Assyrian cavalry pairs of archer and shieldbearer, by Angus McBride.

Assyrian cavalrymen at first mounted horses as they would donkeys, farther back to the rear (which will damage a horse’s kidneys) before figuring out the correct riding position. They rode without stirrups and saddles, trusting to their gripping legs and the reins to keep them on horseback. At first, Assyrian cavalry units were organized like the infantry, in duo teams of an archer and a shieldbearer, which held the reins of the archer’s horse when he loosed his arrows on the enemy. Later, Assyrians moved on to cavalry units where ever cavalryman sported a bow and lance. 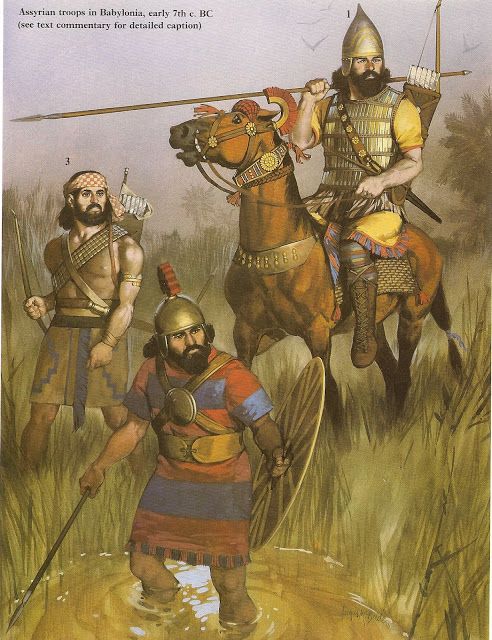 Assyrian siege engineers were among the first to build siege towers and battering rams. Most walls in the ancient Middle East were built of sunbaked mudbrick, which could be torn down with iron tools. Heavily armoured Assyrian sappers were thus employed to carve through enemy walls to collapse them. 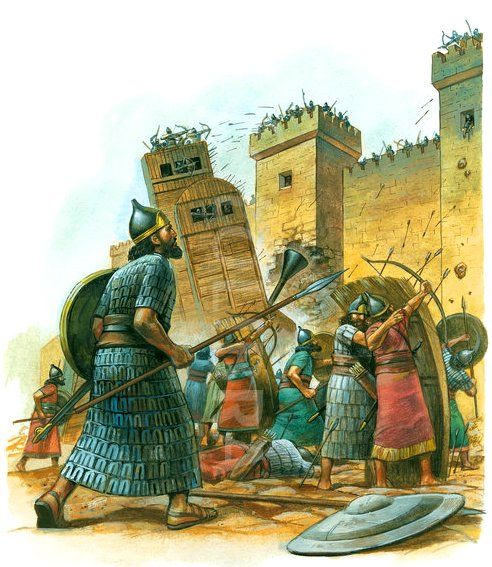 In short, Assyria began as so many other petty kingdoms of antiquity, yet it possessed a peculiar tenacity, competence and martial fervour which carried its banners far and wide. Its armies began as tribal levies and feudal musterings, yet developed into professional corps of paid full-time soldiers which did not need to return to the farm for harvest. Its hosts sported combined arms tactics which could best the most lethal opponents of its time, and its organization and preparedness was second to none.

Assyria threw punches right, left and centre, and its armies marched in all directions of the compass from its small heartland in upper Mesopotamia. It suffered defeats, yet like Rome, Assyria always recovered and came back, more dangerous than ever. For centuries this empire dominated the region with avarice and terror, lording it over hateful subject populations which finally revolted in its moment of weakness and civil strife, to bring down this dark colossus of shining learning, power and glory.

Its grand cities were no more. Its monuments buried in the desert sands. Its libraries burned. Its back broken. The feared realm of a great people had fallen.

Such was the cruelty and might that was Assyria. 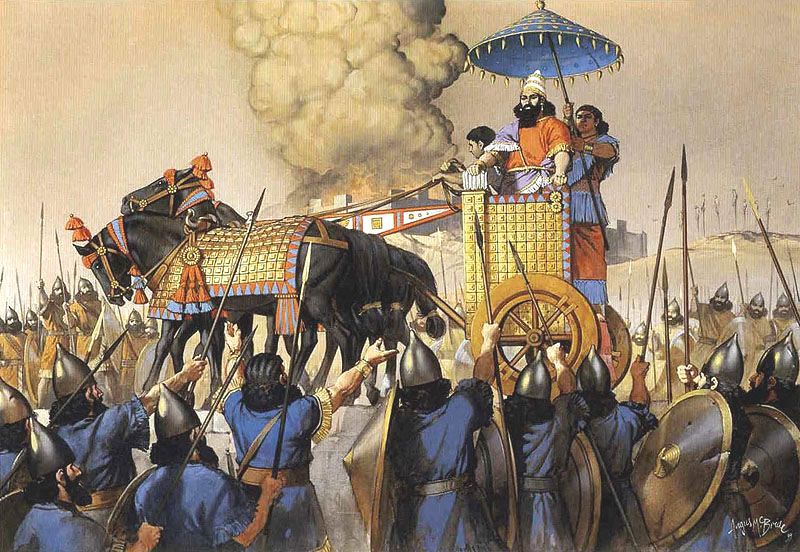 Assyrians believed that the entrance and corners of rooms needed to be guarded by protective spirits, for which purpose Assyrian palaces were equipped with gateway lamassu statues and relief carvings of guardian demons. The massive stone statues required a lot of coordinated manpower to haul into place. 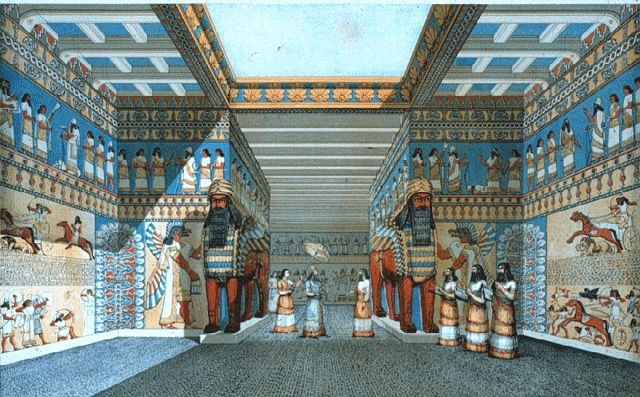 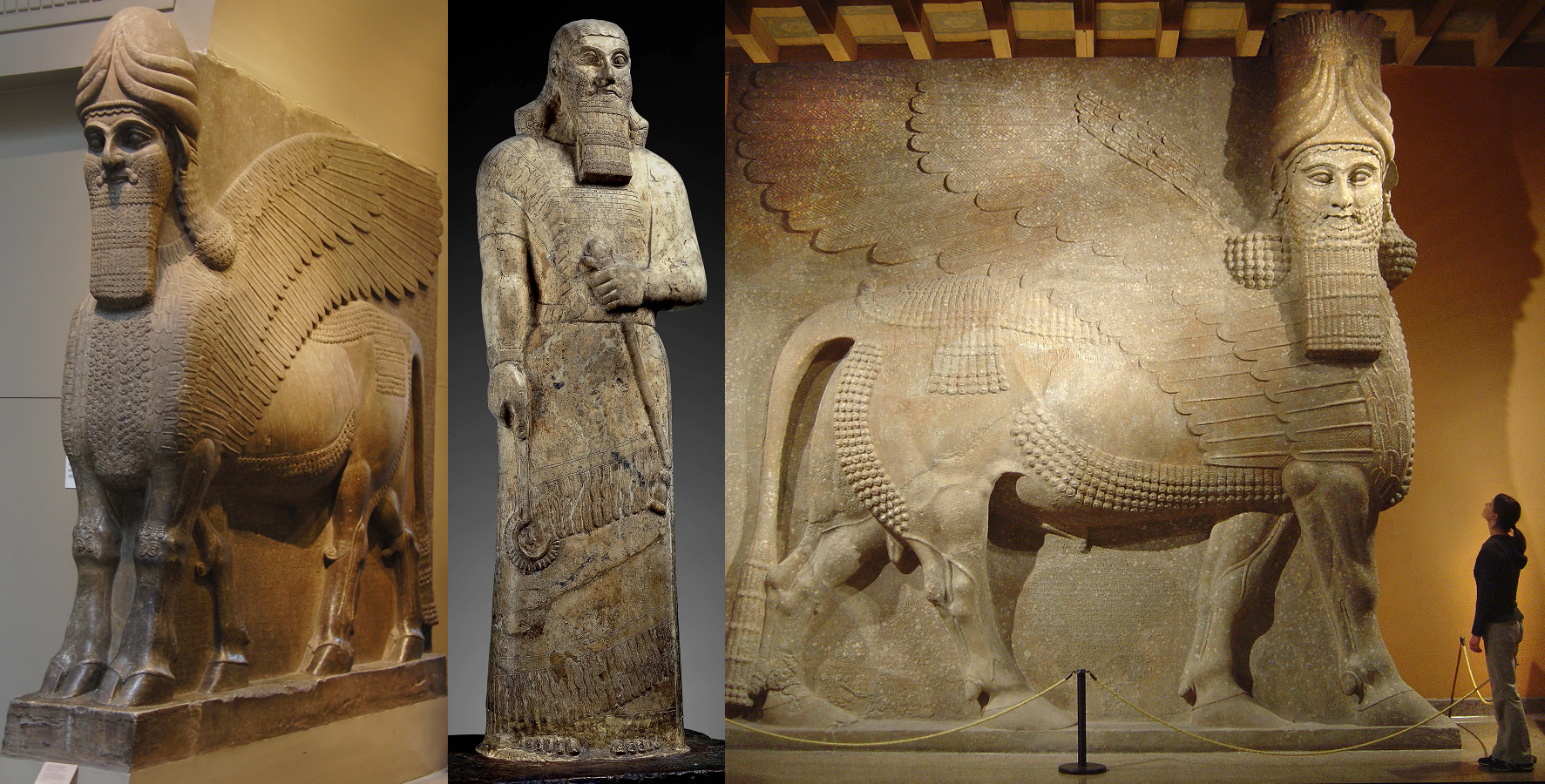 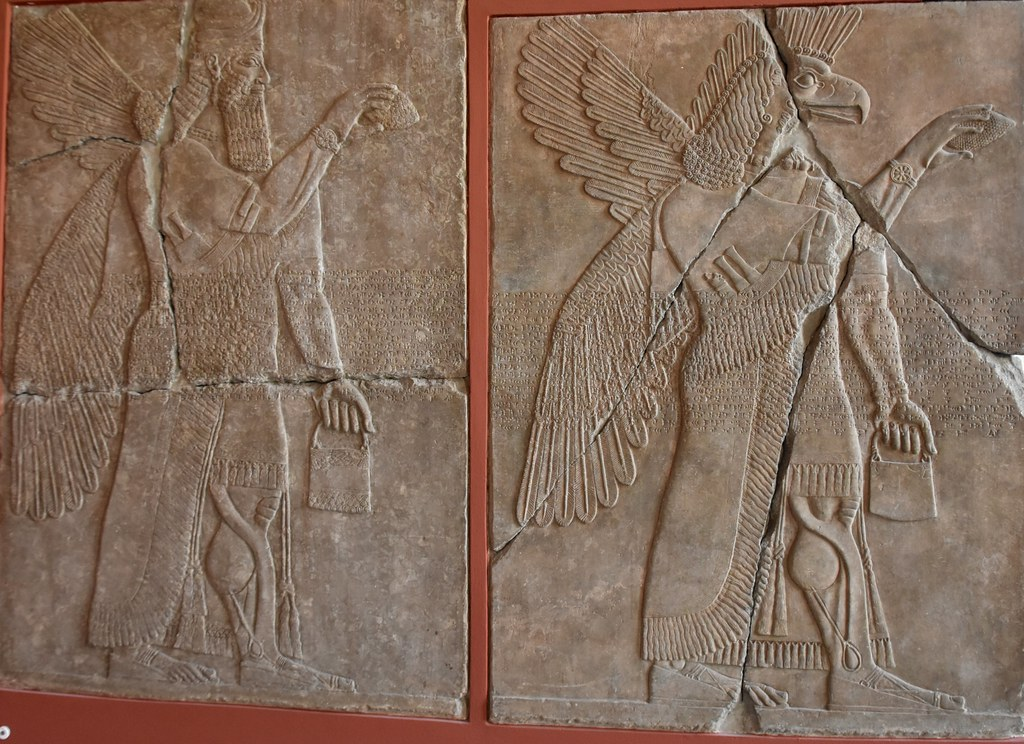 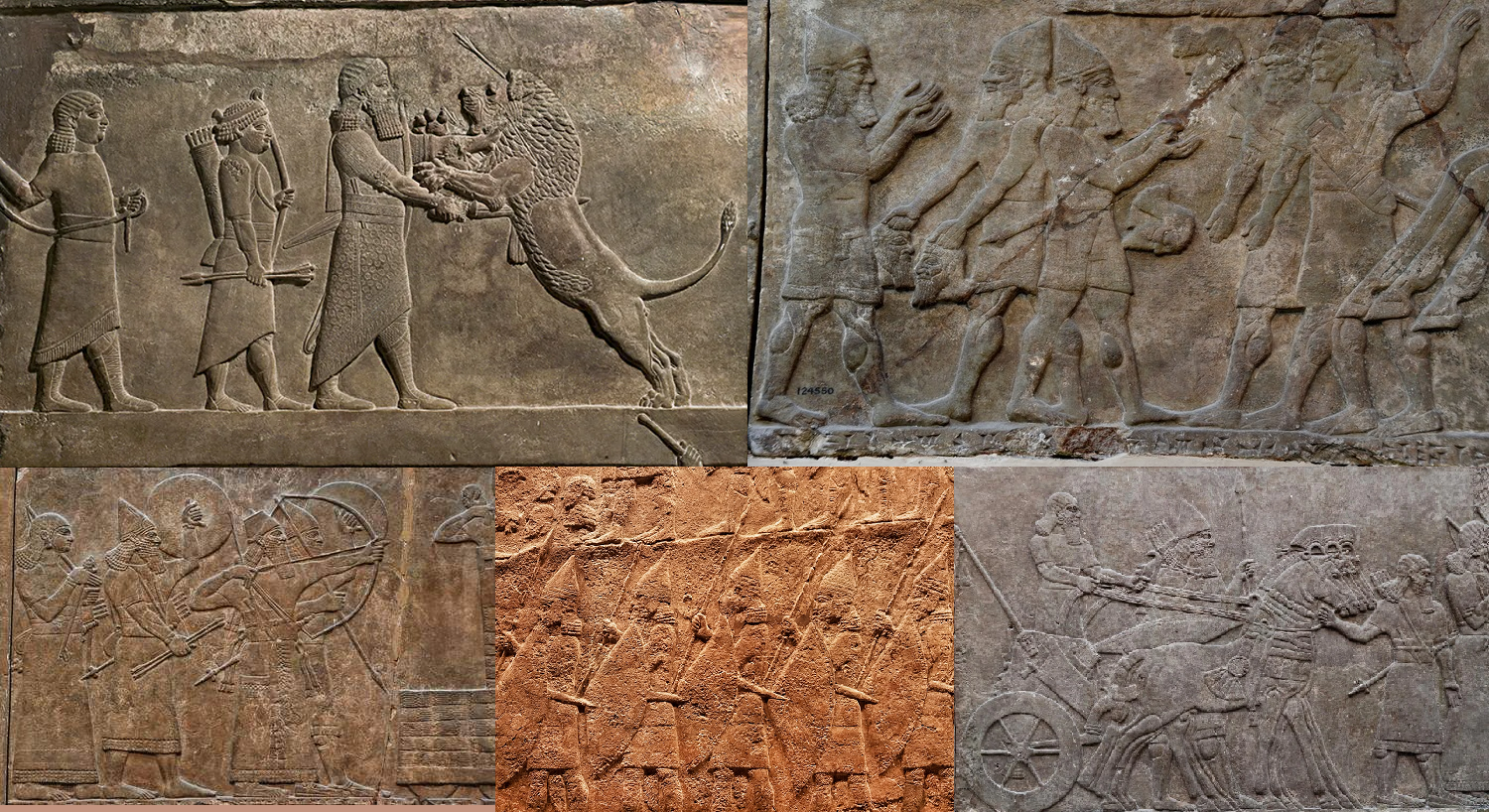 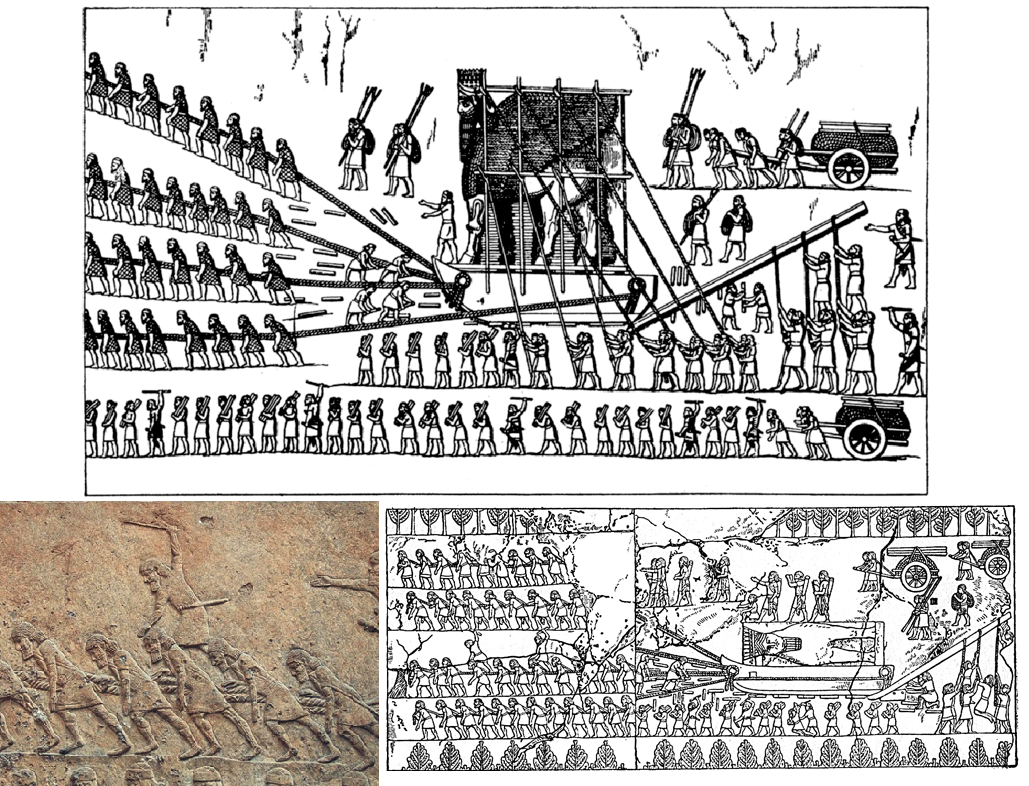 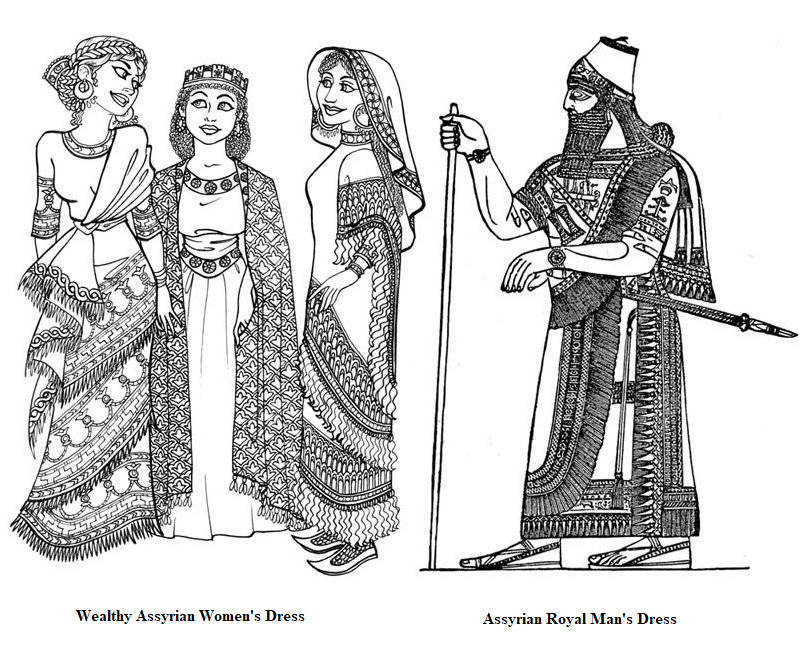 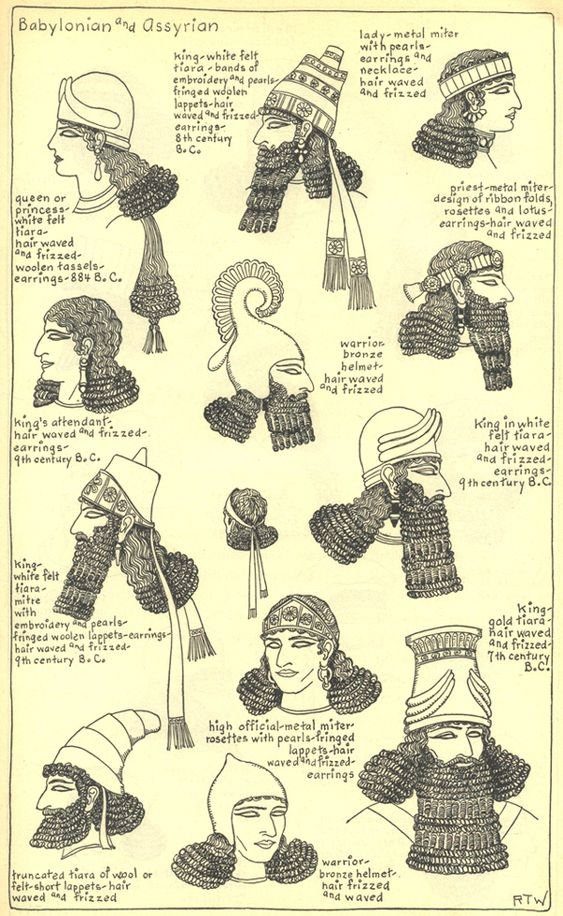 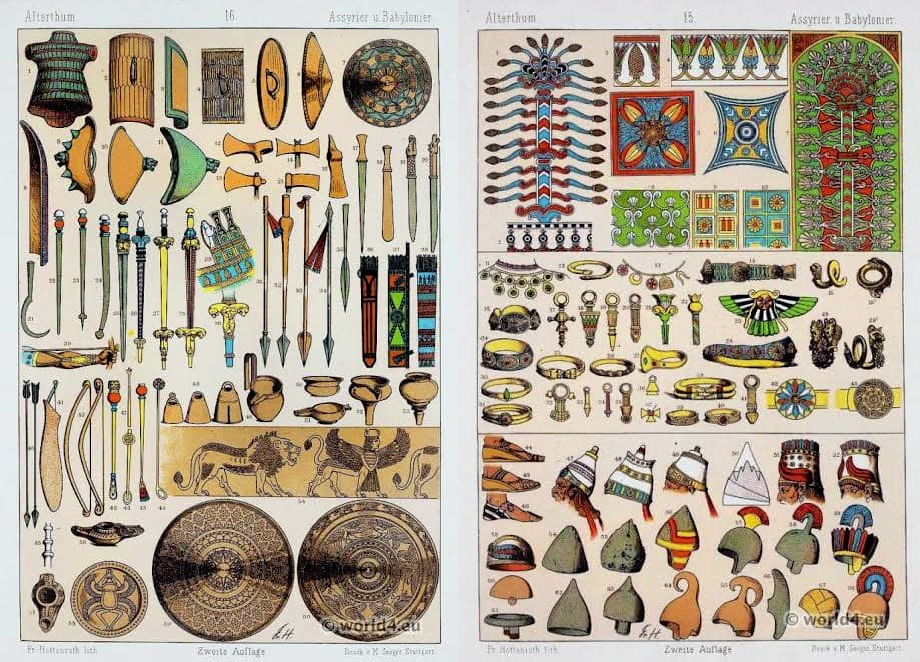 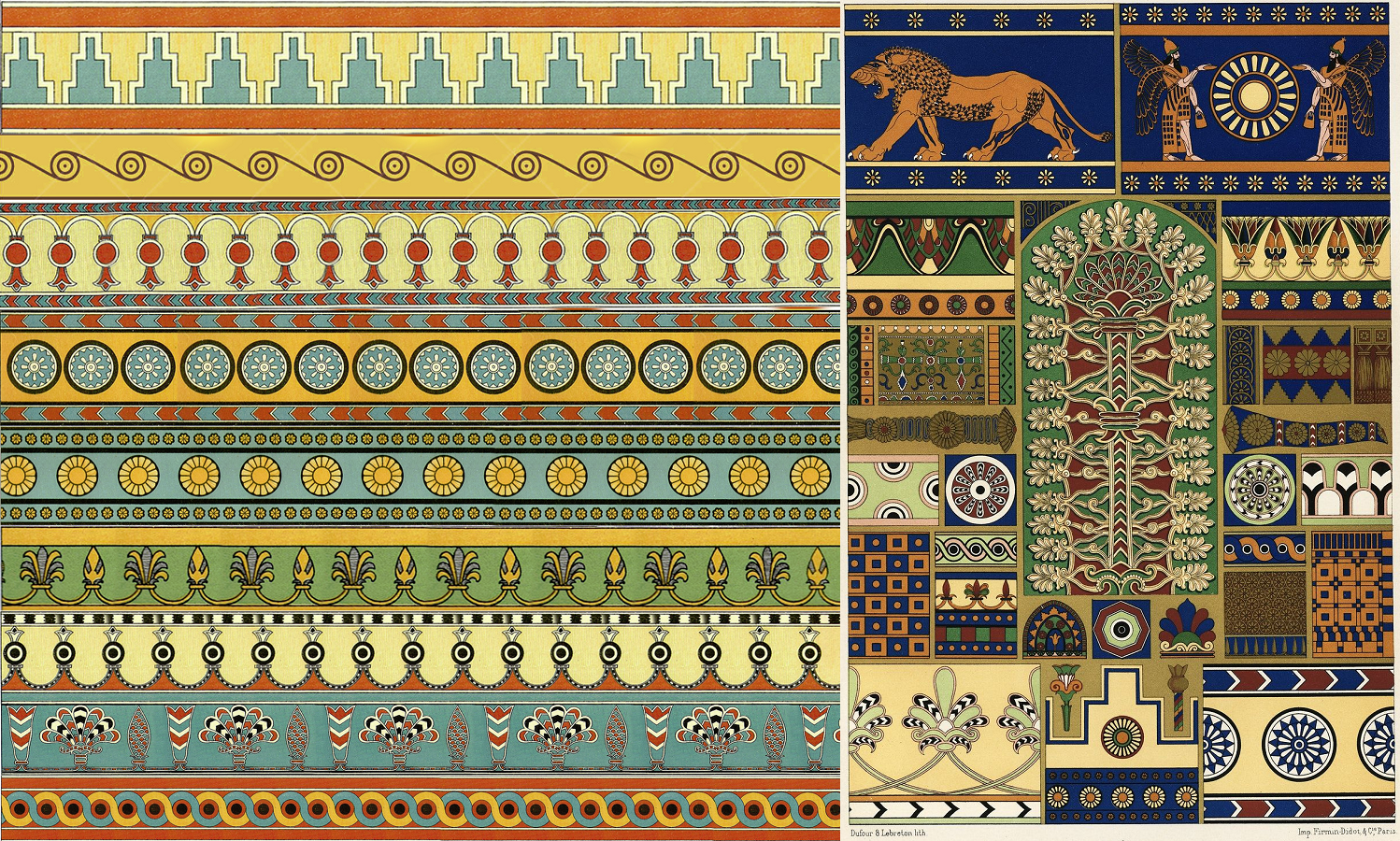 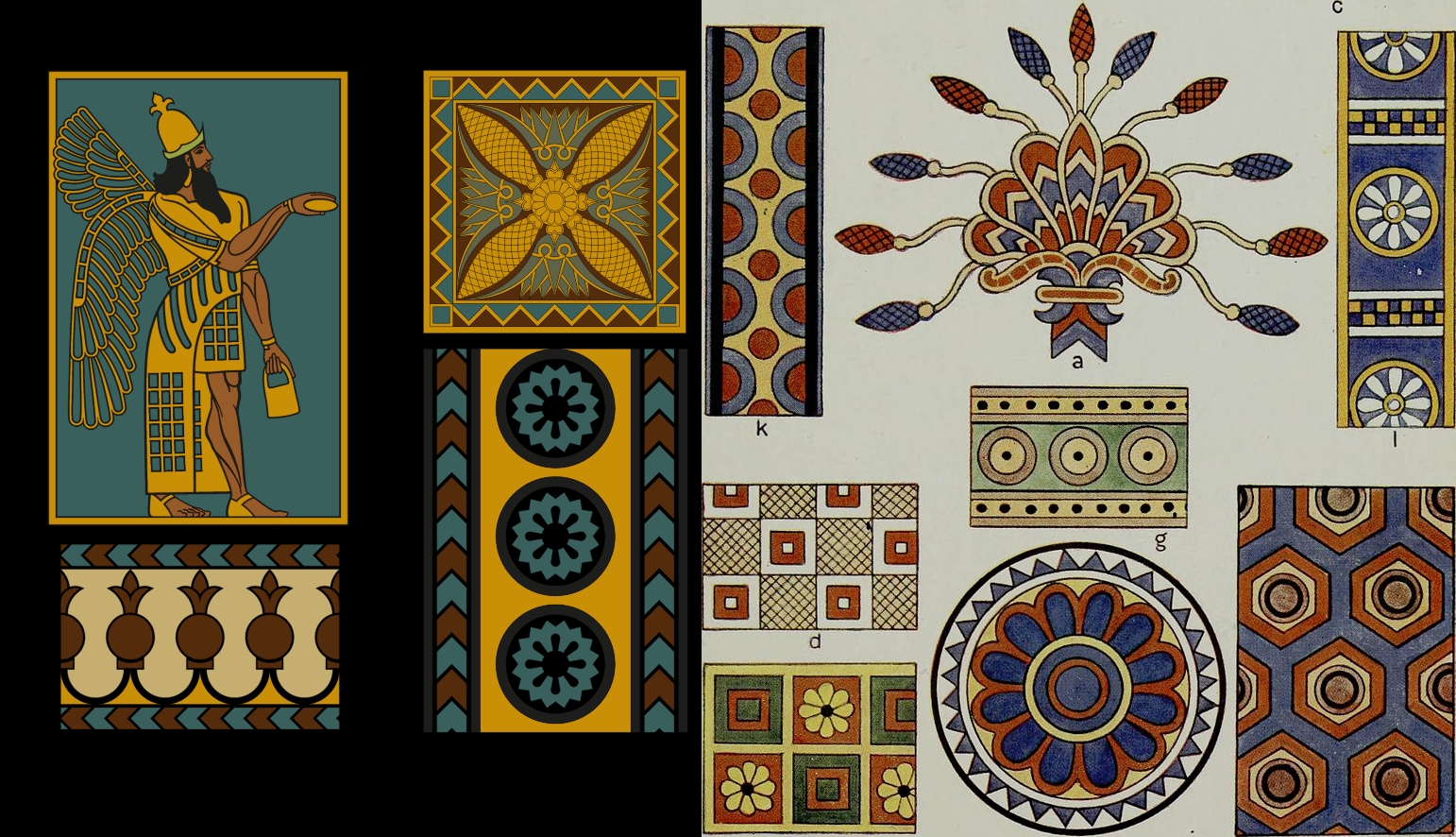 Great post and really good for inspiration on paint schemes and styles. Always a pleasure man!