I’ve been considering collecting a 40k army for probably 8 years now, never could quite settle on which one. I like the design aesthetics of necrons, the crazy fun or oaks, the intricate painting of harlequins. But what always drew my attention the most was the legions of chaos, as an excuse to let my imagination run riot!

However, the new death guard settled it. Always loved nurgle!!

This first update has no pictures, but what I’ve been working on is turning a set of bikes into something that better fits my image of the relentless sons of barbarus.

The first design rule was no rubber. In the fluff any rubber just cracks and breaks on these guys. So tyres were out.

Instead I’ve turned them into metal wheels with plastic plates.

Secondly, I wanted to slow them down visually for bikes, but make them relentless. How did I do it? With sticking tracks on the model! Plus a dozer blade, on a bike!!

For variety I’ve settled on the following:

Bike 2 is proving a challenge, as I had to move the front wheel forks onto the back, whilst still having the handlebars on the front!

Looking forward to seeing this. Putting my finishing touches on the first 2k of Death Guard this month. Going for a ‘no two models alike’ myself. So it’s gonna be heavily converted.

Been a member of this forum for quite a while now, and I remember your old sculpting WIPs & your magnificent Ku´gath. If there´s somebody who can make Nurgle even more unique, that´s you! Keep us poted

EDIT: I am glad I will see more minis coming from you, but a part of me is sad because you will postpone work on your 200+ Infernal Guards

I’ll have a great Renaissance of chaos dwarfs at some point, when I finally get sorted buying my house. They’re my favourite army, and I fully intend to complete everything I have.

Thanks for the compliments btw.

My collection will not be for gaming, but to see truly warped creations might take some time.

Random question for the 40k fans. What is the smallest space/chaos marine gun/ artillery that can’t be carried by infantry?

I believe it's the Noisy Cricket... wait, no sorry wrong IP! Got to be a bolt pistol right?

Yes indeed a blog from Grim is worth reading, I'll be looking forward to this, I can imagine your sculpting and painting style really suiting Pappa Nurgle and all his beasties

The new Death Guard models are really nice - I’ve amassed my own plague-ridden legion over the last few months! Looking forward to seeing what you come up with, Grim.

Ah, this will be good!

Ive been toying with some Nurgle myself for W40K, but Chaos Squats of course.

I believe it's the Noisy Cricket... wait, no sorry wrong IP! Got to be a bolt pistol right?

No, I meant in terms of like a lascannon equivalent, but I know that can be carried obviously.

I had in mind to convert something like a mobile artillery that has a gunner sitting up on a seat, tracks underneath, and a large cannon infront.

Just not sure which cannon to stick on it?

As an update, I've completed constructing the second bike now, I'm going to start doing the greenstuff tidy up and detail bits tomorrow.  Then hopefully some pics.
Grimstonefire 23 December 2017 02:25 #10

Still no pics as yet, but another small update. I’ve assembled the three bikes, and all looking great. I’m going to see if I need to convert the plague marine legs to fit on a bike, or use the biker legs but convert to a more plague marine look.

I’ve also been busy working on my next model.

It’s a nurgle rhino, which has presented a huge technical challenge for me.

Firstly the level of conversion. Google nurgle tanks and there’s hundreds with tentacles and eyes and all sorts, which imo (no offence to those that made them) doesn’t fit with my vision of them as it’s a little too cartoonish.

What I had in mind was basically to convert it to be as dilapidated and rusty as it’s possible, but still looking like a functional fighting tank. Might need more work to get to this look.

So I Googled lots of broken down rusty burned out tanks etc for inspiration. There’s some great images of a tank they pulled up from an ocean somewhere.

Secondly, the painting of it. Here is where the technical challenge comes in. I plan to throw every weathering technique there is at it. Like the historical tank modellers do.

I’m also thinking of making this a based tank, like a mini diorama, with some of the basing material growing on the tank.

This is more the sort of look I’m going for, where the models will incorporate some of the base textures and colours. Hinting a little like they are decomposing.

Mh… Don´t make your models too dark though. You already use a pretty dark palette on your miniatures (which works splendidly by the way), but the pics that you posted just look like big blobs of black with a few hints of flesh or green… I mean, I do think that the Eavy Metal´s paintjob is a bit too garish for Nurgle followers, but what´s the point in spending so many hours in sculpting eyes, sores, and tentacles if you are not going to make them pop???

Looking forward to see your minis though! A painjob from Grimstonefire makes for a great Xmas gift

You’ve got me interested to see what eventuates. Thats pretty good because 40K and nurgle normally don’t arouse much for me

That’s very true. I’m thinking to keep it quite light but with greater levels of surface texture.

The bikers proved to be a small challenge. The models are considerably larger than the chaos bikers themselves. So effectively the models are “sitting” about 2-3mm above the seat.

However, you could only tell looking really, closely and I’m chuffed with the result.

The gunner in the rhino hatch is a bit silly really. I replaced with a plague marine and there’s no way he could possibly get in or out through the hole. But it looks cool. Likewise with the standard model he’s considerably larger.

The bikers proved to be a small challenge...

I never managed to track down the microbeads I was planning to use, so instead I’m working through the models doing what I’m calling “Phase 1”. Which is effectively painting to a reasonable standard all the models, then when I come to base them I will have these beads and add a layer of texture to the models.

Despite my initial thoughts, I’ve been thinking I will actually paint each model in a different colour scheme!?! Which sounds crazy, and it’s not something I’d ever have considered with a Warhammer army…

Essentially they are all shades of green. with a yellow trim for shoulder pads etc. Red as a spot colour, and purple for any cloth.

Yet to come up with a fluff reason for why they are all different shades of green???

I’ve now painted up 4 plague marines, 4 terminators, the blight drone thing is about 75% there, and I’ve done a load of work on the plague zombies and a rhino as well.

Still no clue as to what to do for basing though???

The 3 bikes all assembled and one about half painted.

Show us pics. Seeing the colors on your minis helps us helping you (cit. Scrubs).

Here they are, in various stages of completeness.  And all needing basing

I’m thinking the tank needs a suitable freehand on the top?

I am planning to base the tank as well. Haha. With one of the doors down. Like a mini diorama. 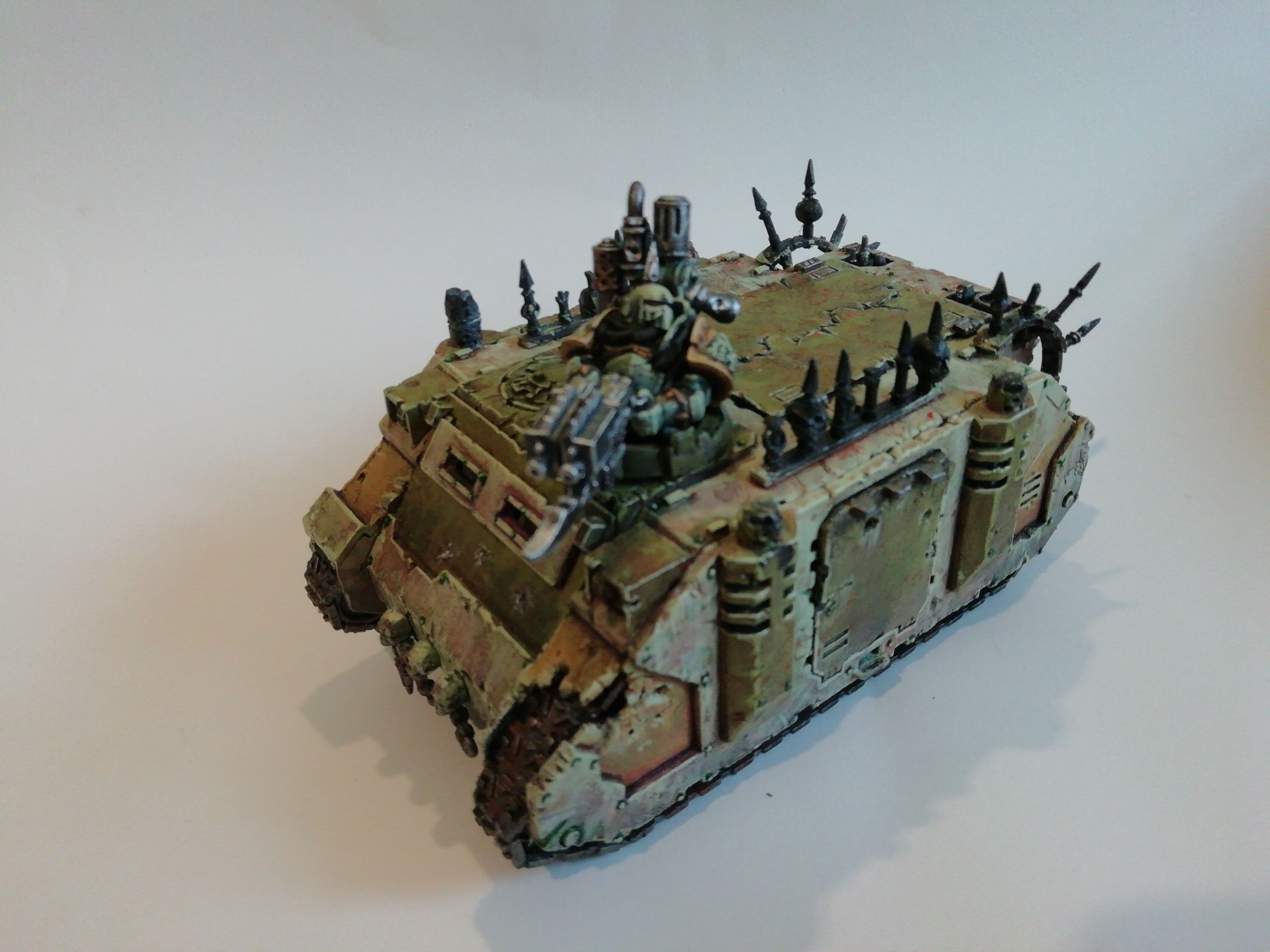 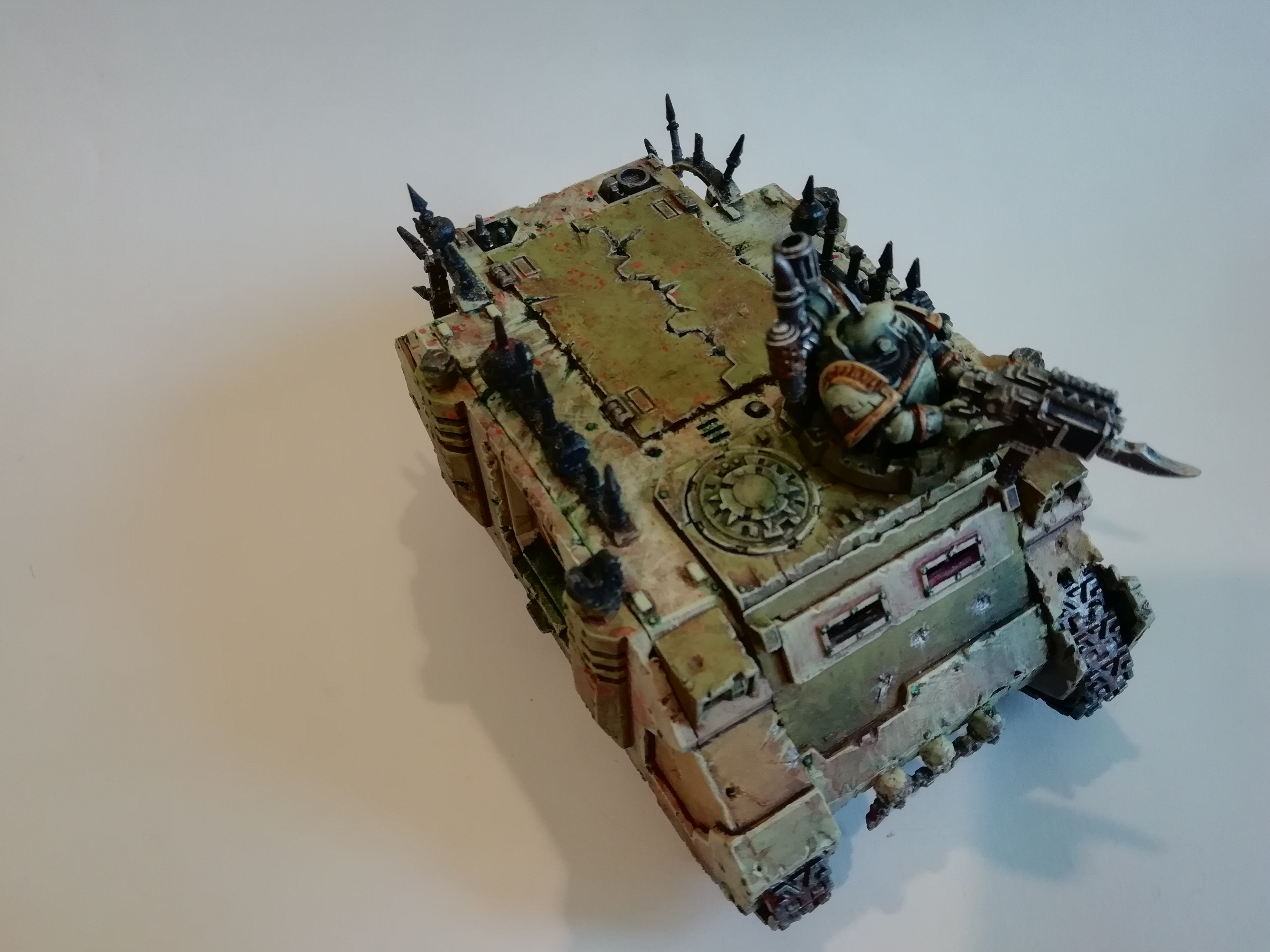 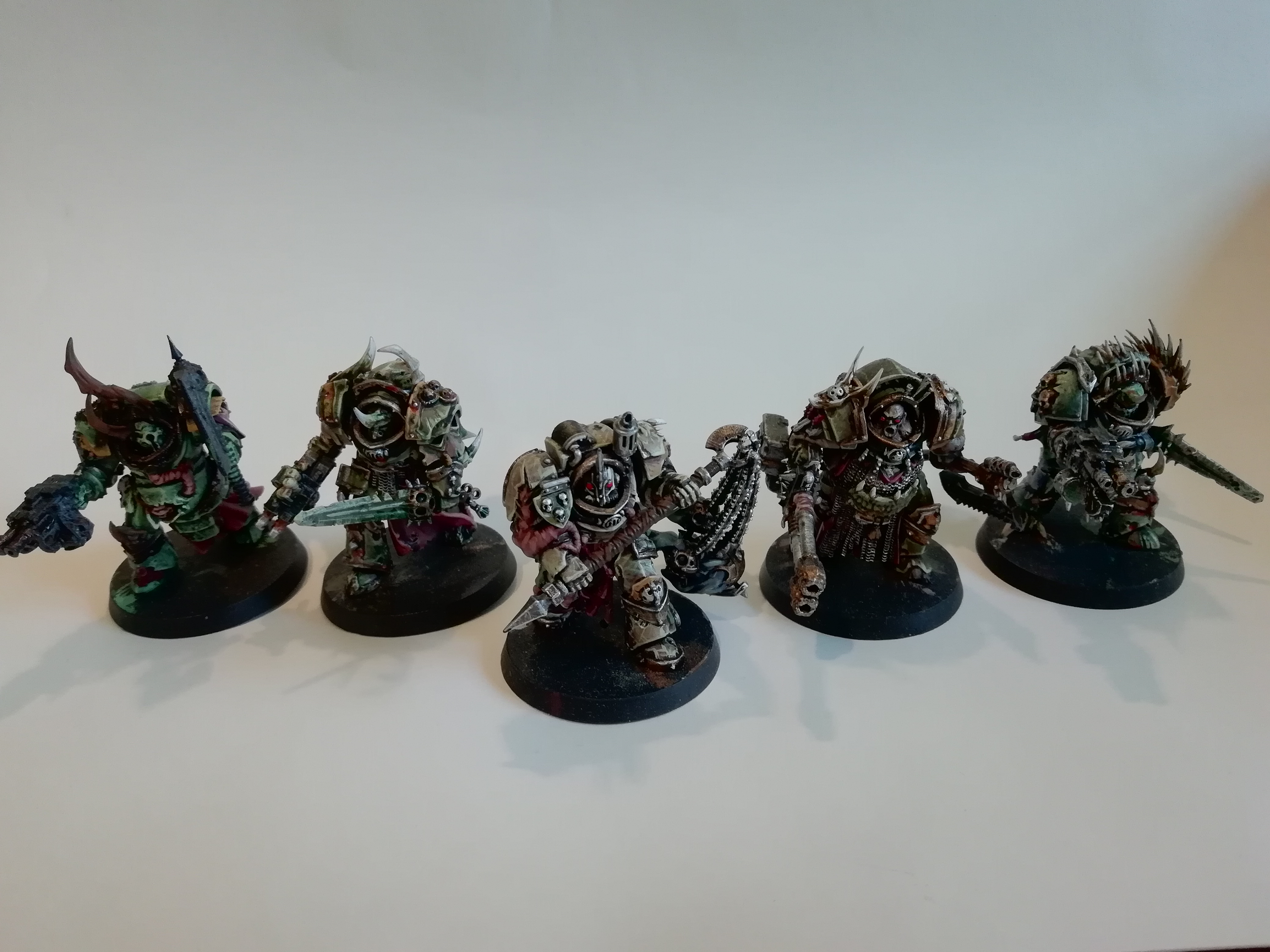 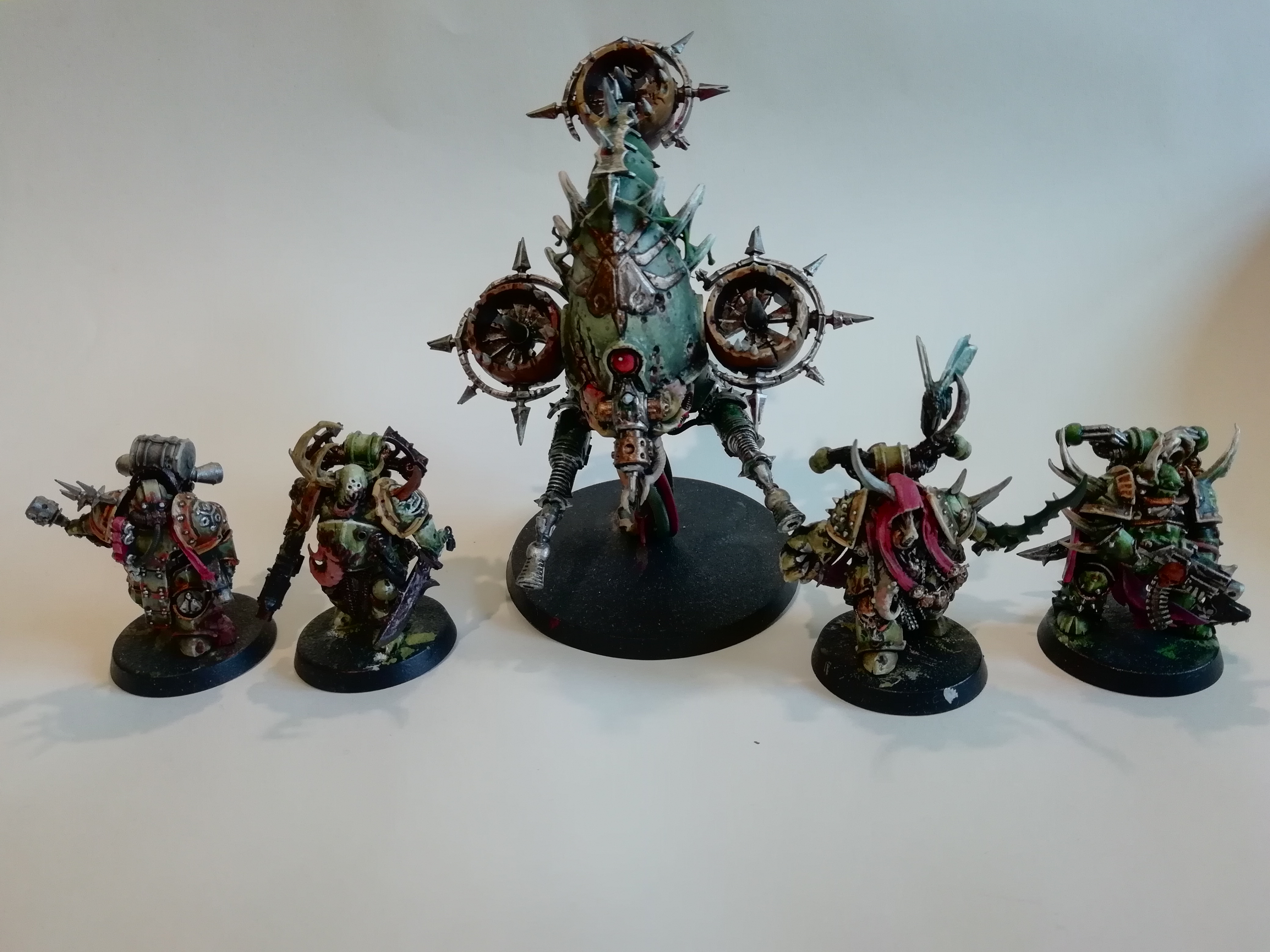 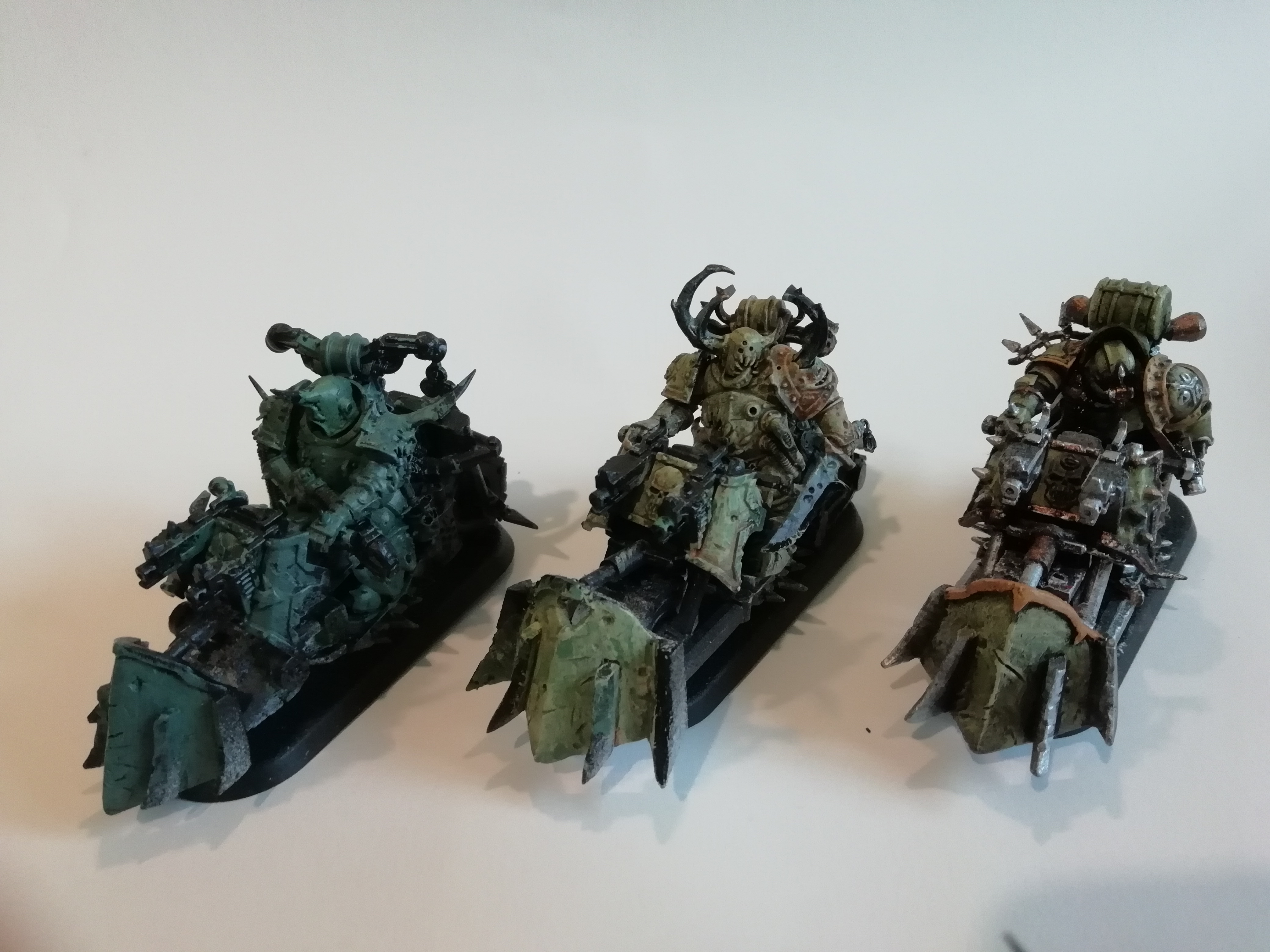 You’ll notice that almost no two models are painted the same colours, which is very deliberate on my part.

I imagine this being more like a holy crusade drawing warriors from all different warbands together, as nurgle calls.

I’m sure I have a couple more plague marines painted somewhere.