[Archive] Shedu: can you see this model working in CD army, and how?

I backed a Kickstarter project a while ago and one of the models that looked interesting was one called a “Shedu”.  The thing is that the original artwork looked somewhat benign, but the sculpt looks very mean and CD-worthy material.

My question is whether you guys can see this model filling a role in a CD army and what equivalent role it would be?  He’s not a CD bull centaur, nor is he a bale taurus, and the closest I can think of is a lammasu (except he doesn’t appear as bestial and ferocious as I’d expect a lammasu to be).  Here’s the pic: 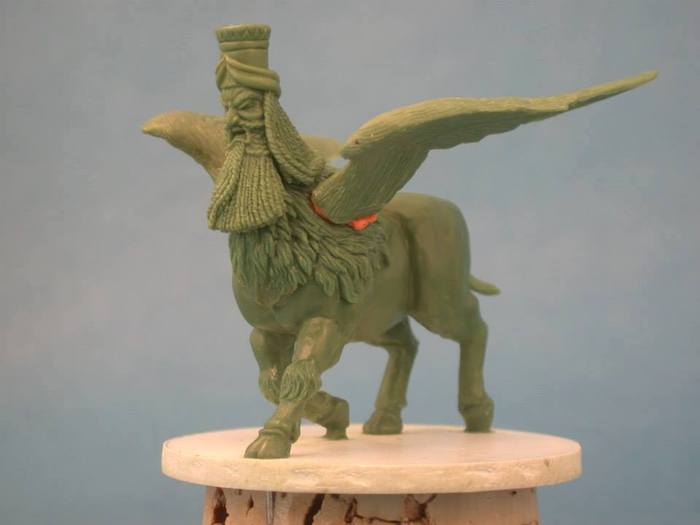 Without any idea of the real size I cannot decide if it could be a Lammasu, Destroyer or what ever!

I'm not sure if the link will work, since I think the KS updates are only accessible for backers, but here goes:
Tome of Horrors: Shedu update

As to the scale, I have only the image to go on, which does not include a reference mini for scale. Someone in the responses questioned the size as well, asking if that was a 50mm base (no response ATM).

The only help I can give is that in the KS project, it mentions that it would be size 'Large'. Other items listed as large in this project were dragons, gorgimera, two-headed troll, a golem and a devil.
Bloodbeard 30 October 2013 05:14 #4

A shedu and a lamassu is the same monster. Shedu is just a lesser used name.

Try to look at some of the lamassu pictures online. GW has their own version and he is monstrous.

But that guy look like a lamassu for sure.

A shedu and a lamassu is the same monster. Shedu is just a lesser used name.

Yes, shedu = lamassu, but he's not quite on par with the CD lammasu. I guess in order to get there, aside from adding an "m" and dropping an "s", you need to have an extreme case of macrocephaly, replace eagle's wings with bat wings, grow horns and tusks, replace the front hooves with taloned hands, and grow a club on your tail (did I miss anything)?

So would you modify this shedu mini into a lammasu, leave him unmodified to fill the role of lammasu, give him a different role, or leave him out of your army altogether?
system 3 November 2013 06:02 #7

If it’s to small to be a Lamassu, you could just take away the wings and put a pair of arms on it to make a nice bull centaur.