[Archive] Square or Round Bases

The time has come. I’ve collected a pretty decent sized Chaos Dwarf force of 4th-7th Edition style army. My original plan was to place them on the original size  bases they came with. Recently, my local gaming group has mentioned trying out AoS. I could just play another army, but I’m considering using the Chaos Dwarves and basing them differently than they were originally designed for.

Let me also mention a few other things:
The only Warhammer Fantasy I’ve played is 4th-5th Edition back in the day.
These guys are my homies and don’t care what bases my models are on.
I’m 85% probably not going to play in any tournaments.
It might be nice to hit up a store near my workplace and play AoS with strangers who probably use the current rules and bases. Not sure if it would be an issue with square bases.
Wishful thinking - It would be nice to play Old Hammer with movement trays and having an army based the original way.

Questions:
Am I at some sort of disadvantage by playing with smaller square bases?
Say I do play AoS - Do my artillery units like Earth Shakers, Death Rockets, Bolt Throwers convert over to something in the new rules?
What are my biggest issues in trying to play AoS with an old school CD army?
Am I over-thinking this?

Sorry if the post is disorganized, just collecting my thoughts as they come to me!

pic of collection so far: 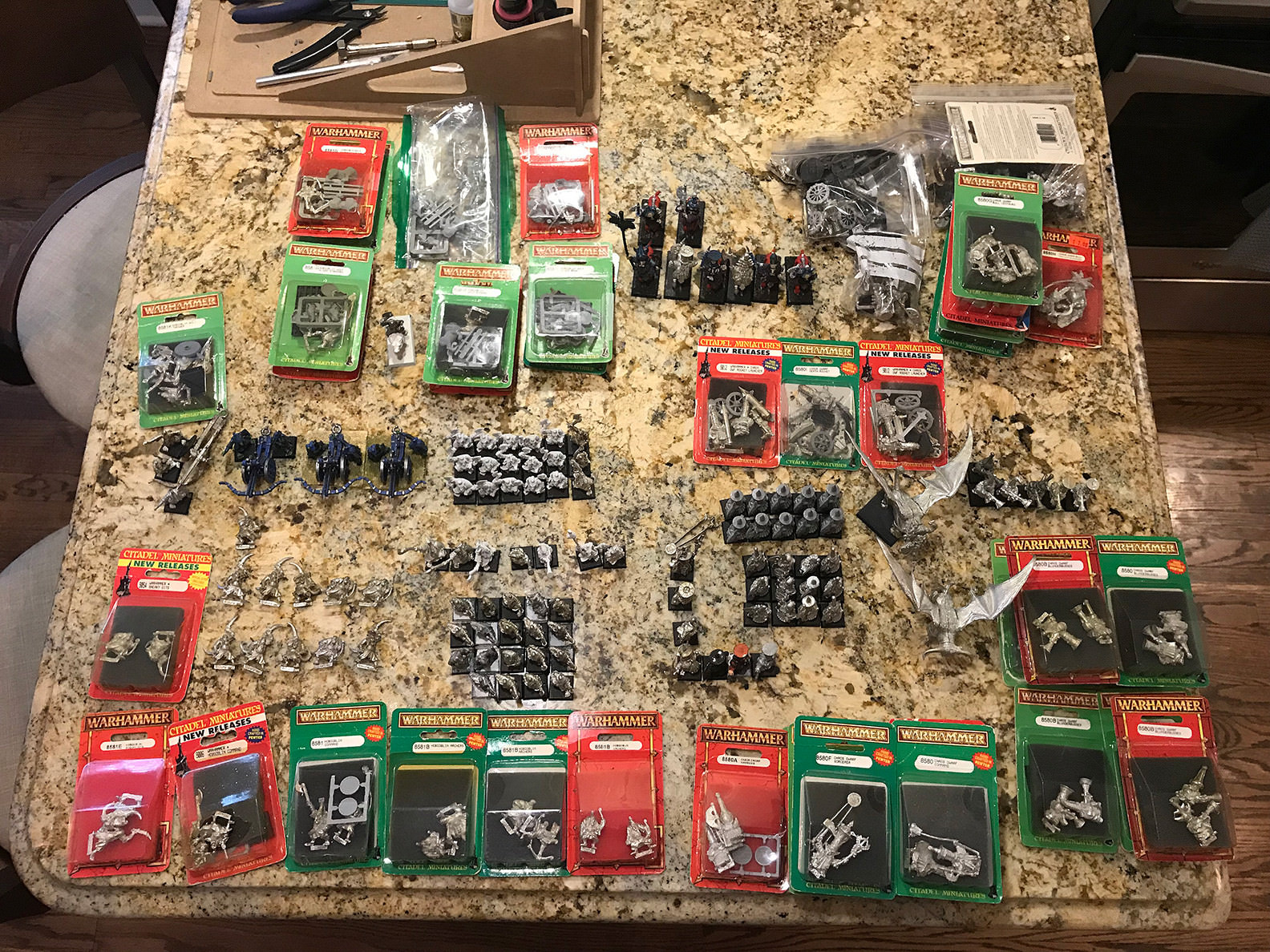 Sorry mate, can’t help with square/round question since same like you, I was a 4th and 5th edition player only.

But just wanted to say that that is an impressive CD collection, wow!

Base sizes and shapes in AOS are not important. All measurements are to the model. So really it is personal preference. I play with my kids with a mixture of round and square bases, so with your mates it should npt be an issue.

I often count hpbgobs as ungor and ungor raiders

Wolf riders as chaos marauder horsemen and blorcs as bestigors

If you want WHFB aswell I would go square base

Whatever have fun with AOS I have really liked it

If you want fun, whacky, non-serious games, I’d suggest AoS. If you like more competitive or strategic games, T9A is probably where you want to go.

I cannot help at all either but what Uther and Grim… have said sounds like good advice.

That is a nice army shot and I’m GobSmacked at how many are still in their packaging. 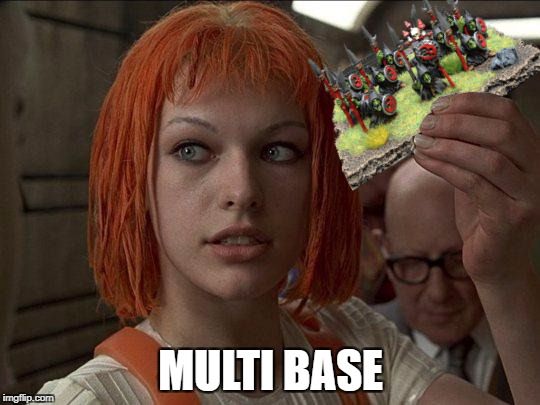 If you want to flip between the games, then you could mount them on 20mm round bases and rank them up on the unit trays with holes cut for the models.

Questions:
Am I at some sort of disadvantage by playing with smaller square bases?
Say I do play AoS - Do my artillery units like Earth Shakers, Death Rockets, Bolt Throwers convert over to something in the new rules?
What are my biggest issues in trying to play AoS with an old school CD army?
Am I over-thinking this?

- No, you're not. As Uther pointed out, bases aren't relevant in AoS - you just measure between the closest points of the models. However, some people don't like this rule and a lot of groups house rule that you measure base to base instead. It's worth checking with your friends how they want to play it. Since the smallest square base is 25mm, the 20mm squares are obviously a smaller footprint. Whether that's an advantage or disadvantage is probably an open question, but they are different.

- You can find all the AoS rules for Chaos Dwarfs on the Forge World website, as they've now become the Legion of Azgorh. Basically everything that was "Chaos Dwarfs" is translatable (warriors become Ironsworn, blunderbusses become Fireglaives, etc.) but there are a few omissions. For example, there aren't any Hobgoblins. You could use the rules for Grots (goblins), but not in matched play games because they're from the Destruction Grand Alliance. Ungors are a decent substitute, but check how your group wants to play.

- You shouldn't have too many issues. Legion of Azgorh are a solid enough army with good artillery options and decent infantry. They're missing some of the variety of other modern armies, but since you can draw from everything in the Chaos Grand Alliance anyway, you can always supplement them with loads of other options (even if you're just using the rules for a Chaos Dwarf unit).

And, a personal plug, here are screenshots of all the LoA warscrolls plus a few extras from elsewhere, that I took from the AoS app.

Nice, this has all been a great help! Thank you very much.

Some time ago there was a shared link to some company, 3D-printing service or suchlike that made plug-in 25mm round bases for 20mm square bases. I can’t find it on the quick, though. Does someone here happen to have the link?

I’m increasingly getting the impression that the strict adherence to infantry base sizes in T9A and probably some other Warhammer legacy games is an unwanted obstacle these days. Now, we don’t have a monolithic wargame common to all in the massed fantasy battles niche, i.e. WHFB, but a slew of different wargames such as KoW, AoS, T9A, old Warhammer editions, Dragon Rampant, Conquest, Oathmark and others. 25mm rounds rank up just as fine as 25mm squares do on a unit tray, but there is no way to shrink 25mm rounds to fit a unit that is supposed to have 20mm squares without rebasing (or building the most annoying two-level movement tray in existence). Not an issue for friendly games at home, but it seems an uninviting obstacle for would-be players in pick-up games and tournaments.

In your shoes I’d either go for whatever one happens to like the look of, or go for 20mm squares and adapted unit trays or plug in 25mm rounds where necessary, since smaller bases can be played as larger base sizes but not vice versa. Cross-system compatibility is an issue nowadays if one were to move, and the shoe is hurting at the T9A/WHFB toe.

Good luck whatever you end up doing!

Great advice already over the place.

You can mount your troops on regular square bases and play all kind of games.

My son plays AoS sometimes and already was on a tournament and on a GW event with his Lizardmen/Seraphon army completely based on square bases - no problems at all, it wasn`t even mentioned.

With this base size you can easily play AoS and same time change to 9th Age, KoW or older Warhammer editions.

Half of my mates are still on square bases. Nobody cares. They competed in an AoS tournament recently and had to blu-tack onto round bases temporarily, but that was easy enough. Didn’t get docked for painting+basing in any way.

I recommend just hooking in and playing a few scenarios. It’s heaps of fun. I personally love the flow of AoS battles much more than the geometry of older editions. It’s also very brutal, which I dig too.

I just want to congratulate you on collecting that army, Vapo. It’s incredible lol

Some time ago there was a shared link to some company, 3D-printing service or suchlike that made plug-in 25mm round bases for 20mm square bases. I can't find it on the quick, though. Does someone here happen to have the link?

File is available on thingiverse. They work really well as long as they aren't being used on bases with painted sides. I found the adapters scrape off a bit of the paint if you aren't careful. A much better solution than rebasing an entire completed army though.
Abecedar 25 March 2018 09:33 #15

I knew that base converter would be out there somewhere. It is such an obvious solution.