My brother, me and our mates sometime watch all films in one series (or at least all that someone in the know among us consider worth watching) in one marathon run lasting one or two days. Obviously refreshing pauses with some outdoors jog and food preparation are key to stay keen and not doze off too early with all that sitting (standing & watching also helps), and better respect the need for nightly sleep. In anticipation of Episode VII, we watched all Star Wars movies from I-VI.

Listening to this video while painting reinforced my own impression of something of interest for future friendly marathon watches: The new Star Wars trilogy, for all its good moments (and there are many to point to, incl. in Episode VIII), doesn’t fit into the overall story arc. While moments like Luke sacrificing himself by hallucination exhaustion, or having an Imperial deserter as a main character were inventive and ideas with merits, the overall impression is just off, even if the aesthetics are right.

The prequels, for all their flaws, clicks into place with the original trilogy: It’s about the tragedy of Anakin, and the fall of the Republic and rise of the Empire. George Lucas himself always saw Star Wars as a family drama, and obviously it’s constructed this way, but I’ve since my early childhood first watch of Star Wars had eyes primarily for the big stuff: The rise and fall of empires, the strategy and the upheavals, and obviously all the nice designs for both Rebel and Imperial tech and uniforms. Lucas had a coherent idea of the overall story arc for the nine trilogies when it concerns the Skywalker family. Perhaps that family stuff works as it stands in the current unfolding trilogy, or perhaps it doesn’t, but what I cannot help but notice is that the big background story breaks apart at Episode VII.

One would expect something like this to be present at the start of the new trilogy, and the versions are not mutually exclusive: Imperial infighting and warlords. Ascendant Republic pressing a shrinking Empire hard. A situation that opens with the Empire as underdog, just like in the Thrawn trilogy: It’s something that clicks into place with what went before, where we saw the Rebel Alliance’s great victory at Endor. Such a triumph should have visible results. Show, don’t tell.

Then the trilogy could unfold with a shining new leader scooping up the Imperial remnants and clawing them back into a position of threat and power, a true menace reborn before our eyes on screen, an Imperial phoenix. And the narrative could unfold around this twist, with the heroes gunning for a resurgent Empire to go down and all manner of Skywalker family drama going on.

What should not be in such a new setting is a massive superweapon right off the bat: If that is to happen (and there are good reasons to avoid it because of oversaturation - the prequels stayed clear of it, to their merit), then it must be built up/revealed as the new trilogy unfolds, and not exist smack bang right at the first movie. A beset Empire cannot have the massive resources Palpatine once had to build a Deathstar.

While Star Wars movies are rather fun shallow flicks one watch for aesthetics, music and blaster/lightsaber action primarily, its backdrop ought to make sense since there is a story in them. The prequels and original trilogy line up, the new trilogy doesn’t line up. It starts off with a reboot of Episode IV. And this brings some new respect for Lucas’ sight on telling an overarching story, since Disney’s take doesn’t click fundamentally.

Which leads back to the start point: Movie marathons should positively tell a coherent overall story, but the new trilogy, for all its good moments, veer off the path. I suspect future Star Wars marathons for us will involve the prequels, the new Stories spin-offs in-between, and the original trilogy, ending the race at Episode VI on a high note. Not because the new trilogy is horrible (it isn’t), but because it doesn’t line up.

This might seem a rant, but as a storywriter one is constantly reflecting about stuff like this to learn good takes, and what doesn’t work. This is just sharing of some quick thoughts.

What do you think? What Star Wars movies will you include if you watch them in a marathon sitting? 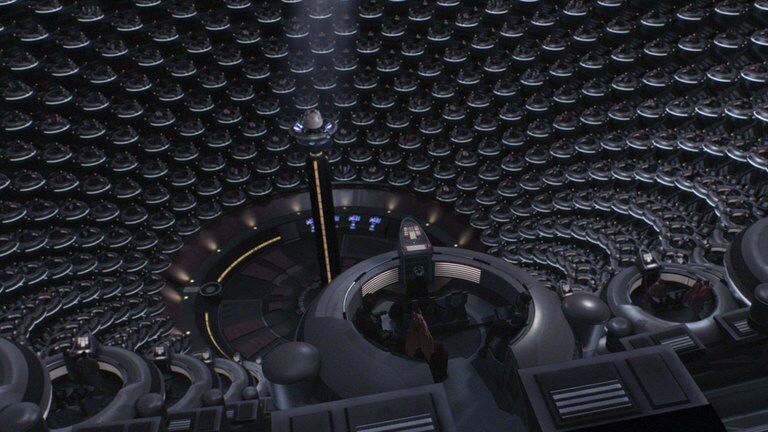 Just a little nitpick, but Lucas didn�?Tt really have an idea of an overall arching narrative, at least not back when he made the OT; Vader was never intended to be Luke�?Ts father, nor Leia Luke�?Ts sister, those are developments that came later. The claim that it was intended to be the tragedy of Anakin Skywalker is a retcon Lucas claimed as fact.

One difference between the new trilogy and the prequels that should be kept in mind is that the prequels were locked in with how they had to end up; the Repblic had to fall and be replaced by the Empire, the Jedi has to get wiped out, Anakin had to become Vader. The new trilogy is under no such constraints so a better comparison should be with the OT; the OT wasn�?Tt originally planned to be only a trilogy and initially wasn�?Tt intended to wrap up in three films but rather last longer. It only became a trilogy because Lucas burnt out creatively and decided to wrap everything up with RotJ rather than carry on making films.

I think a key issue with your dilemma is that until the new trilogy is complete (or even the trilogy after that if Disney plan on making a six film story arc), you�?Tre not really watching all films in a series, you�?Tre only watching part of one when you watch them; for now maybe leave them out of your �?~all films in a series�?T marathon and reassess once the story arc is complete.

If you haven�?Tt seen them already I highly recommend checking out the SFDebris series on the creation of the OT and PT and his reviews of ANH and ESB.

Too deep for me.

I get to watch 1 if I’m lucky when the wife’s not home.

And I used to run a lot. Marathon is a dirty word.