Hi, Ive been looking at the T9A army list for Infernal Dwarves.

From a model/lore prespective, what are all the entries supposed to be? I only had the “slim” army book to look at, and want to be sure I don’t get the entires wrong. Never played the game or read the rules. :hat off

Great question, tjub! I’ll try to guide you through it. :hat off

And for those who haven’t already read it, do check out TheHoodedMan’s introduction to T9A and its Infernal Dwarves! 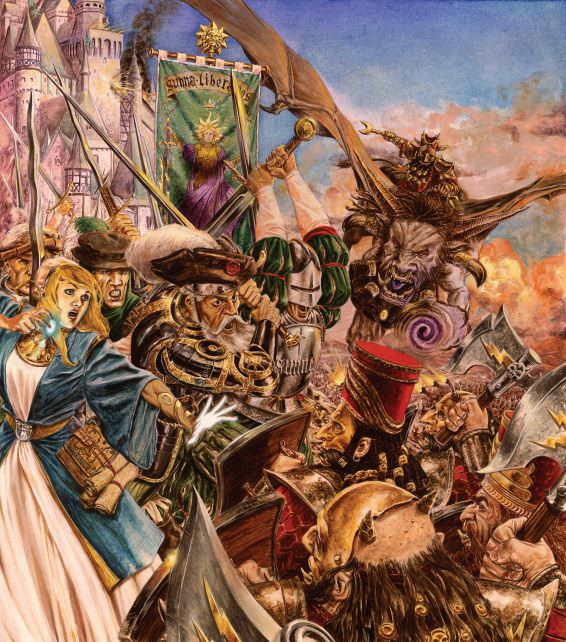 Introduction: Infernal Dwarves (ID) are one of the main 16 armies in the Ninth Age (T9A), a community project involving over 300 volunteer enthusiasts tinkering in their spare time to create and support a vibrant historically based classic fantasy setting and a rank-and-flank 28mm wargame to go along with it (ambitions to expand into other games in the same setting exists).

All this nascent corpus of background and rules are available for free download. T9A have no strict model requirements, which opens up for everyone to get creative and make their very own kind of army as long as the base size is right for the various units. The Ninth Age is currently in the lengthy and arduous process of threshing through the 16 armies inherited from Warhammer Fantasy Battle (W.H.F.B.) and providing them with fully illustrated “legendary” army books (all factions already have the slim rules-only army books).

I can reveal that their next legendary army book project is in fact Infernal Dwarves! Which CDO’s very own Forgefire is involved in, and for which I’m headhunting interested artists over at Deviantart (see T9A DA group). They’re currently gathering community ideas here. 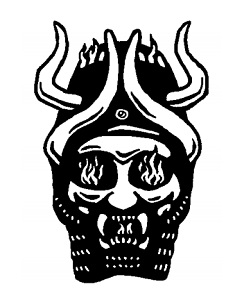 What’s What?: As to units, almost all of them will be familiar to Chaos Dwarf players from WHFB. Background is still wanting until the full army book is released, but I’ll fill in with not-unqualified guesswork at places. So here’s a run-down: 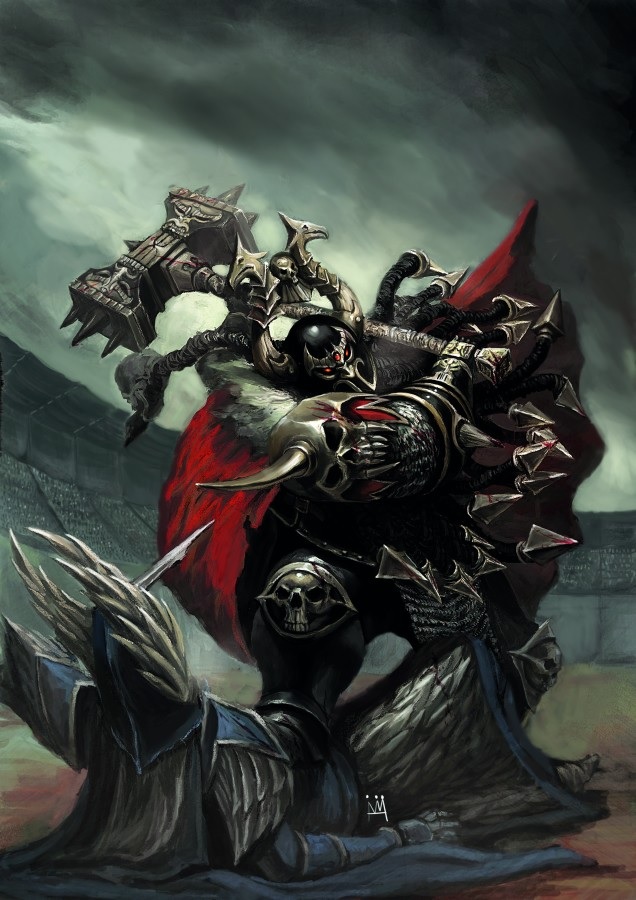 Overlord versus Highborn Elf, donated to T9A by Avatars of War.[/align]

Chosen of Lugar - Character form of the Disciples of Lugar; Daemonically possessed cultist berzerkers on fire. A new concept for Infernal Dwarves in T9A.

Disciple of Lugar: K’daai Cultist reverse-engineered into WHFB Chaos Dwarf duty by our own Helblindi.[/align]

Temple Lamassu - Lammasu, Shedu. Have a magical breath that cancels out weapon enchantments (friend or foe!) for models in base contact with the Lamassu, but not for its Prophet rider. 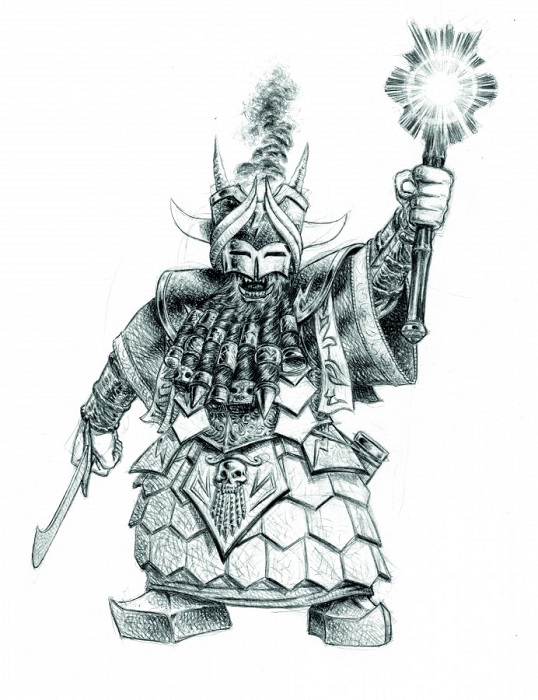 Hobgoblins - Hobgoblins on foot with access to bows and spears. Upgradable to Backstabbers = Sneaky Gits with poisoned paired weapons/additional hand weapons. Hobgoblins may be either lackeys or allies of the Infernal Dwarves in T9A; it remains to be seen.

Orc Slaves - Whipped Orc warriors with lousy Discipline (Leadersip), who will easily bolt if not supervised by nearby Infernal Dwarves or Hobgoblins! 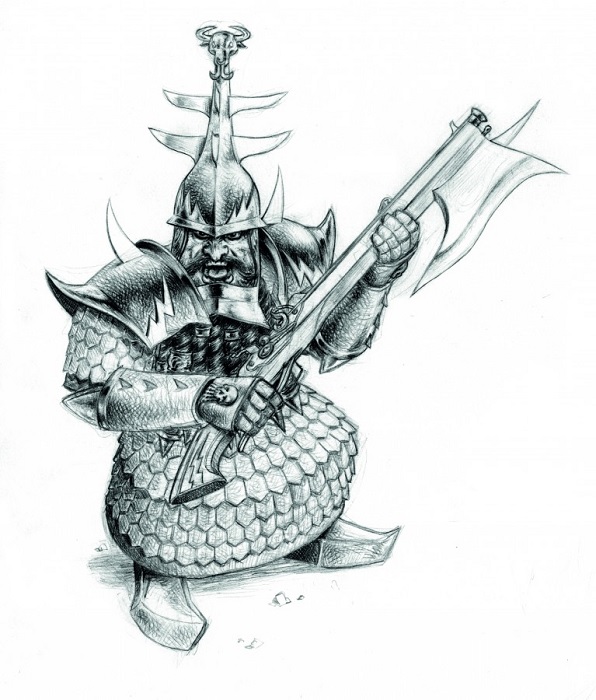 Immortals - Infernal Dwarf elite unit on foot. Bodyguards to characters, with high strength and Blessing of Nezibkesh which makes stomp, grind and impact hits halve their strength down against Immortals. Solid and deadly bunker regiment. 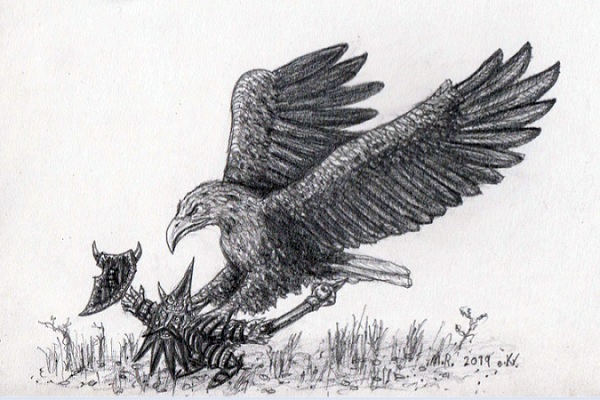 Bound Daemon (upgrade) - Hellcannon customization. Note that you can upgrade all Infernal Dwarf heavy artillery pieces to have Bound Daemon, which makes it a deadlier close combat monster (with Aegis/Ward save) as well as an artillery piece, with a risk of it running amok. Of special interest to model converters: Not just mortars may take Bound Daemon, but also rockets and flame weapons! Asscannon models would be perfect to represent with Bound Daemon.

Gunery Teams (variants below) - Two-man crew light artillery with infernal armour. Hard to hit with shooting, and also have Steam Powered Chassis nowadays which opens up for mechanical modelling interpretations. The concept of Gunnery Teams stems from the Petard, Swivel Gun and Bazooka models from WHFB 3rd edition, but are not limited to only these types of weapons.

Flamethrower - Flamethrower. Two shots: One ordinary damage attack, and an option to instead spray oil on enemies, making them flammable for one turn and thus easy pickings for other flaming weapons and Daemons in the army! 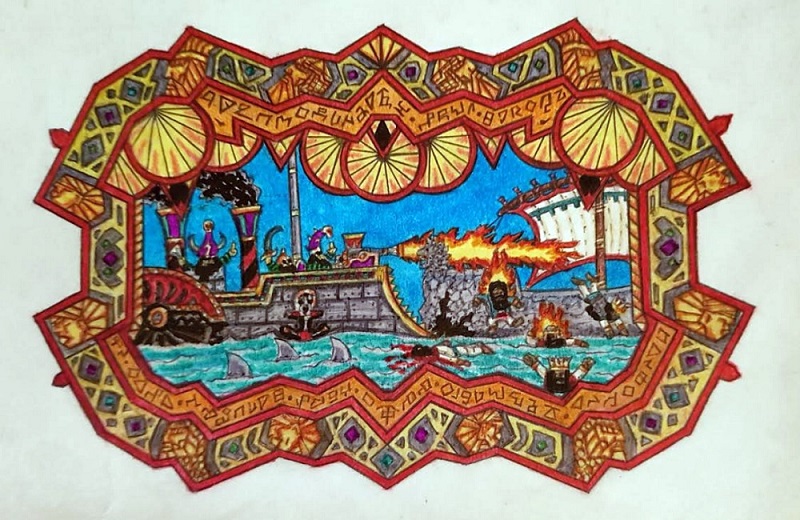 I hope that clear things out, but don’t hesitate to ask further! As said, we’re still waiting for background to come with the full/legendary army book. Remarks have been lifted that the slim army books should have some short flavour fluff lines for each unit, but at the moment they’re rules-only. It’s a work-in-progress.

See also these background (and army) concept proposals for Infernal Dwarves in the Ninth Age, and be welcome to participate in the communal brainstorming here on CDO: T9A is a blast and we finally have a full range of characters and troops to choose.

I am a big fan of the blunderbuss and the immortals.

Thanks, great! Yes this was exactly what I was after.

Great Tjub that you join the community of T9A players :hat off.

Admiral made a great summary of the unit entries and I just linked it to my T9A introduction thread. Thank you @Admiral! :cheers

There should be a thread on the T9A forum as well where all unit types are listed with possible models from different manufacturers.

Normally every chaos dwarf model which was published by GW from 4th edition onwards should find a place in T9A.

An exception are Black Orcs as slaves, as T9A decided that only Greenskins should have the option for Orc elite troops.

Some 3rd edition models also have no unit entries (like whirlwind, tenderiser).

Hey tjub, what part of the world do you live in?

A sweeping overview of Ninth Age history can be gained through the World Hymn, a Dwarven poem dating from the first century of the Ninth Age, which details the nine Ages of the world. The Hymn was later copied to an Equitan tapestry. A reproduction of that tapestry is now presumably all that remains, at least to human historians.

Notice the prominence of Infernal Dwarf actions to bring about hell on earth in the unfolding backstory!

Our past did end in fire and rage

Out from the ash and bitter smoke

We look to hope and keep it close

As all did see our near to end

Yet live to see this, our Ninth Age[/quote]

The Ninth Age has shared an army book snippet from their upcoming Infernal Dwarf project. Enter the most customizable artillery pieces seen in an official army list to this date!

To speak in WHFB terms, how about a flamethrower Hellcannon or pain train?

Industrial production of war machines with interchangeable parts has revolutionized the armory of the Infernal Dwarf armies allowing them to mount any of their guns on a range of chassis with little effort to suite the terrain, enemy or tactics.

This makes me think of Thommy H’s customizable warmachines. A step in the right direction?

yes. It is a logical step to take.

is this the end of our beloved rockets?

Without revealing too much, no.

The Rocket Battery is safe and sound and will still be a separate unit. Specifically it is the Volley Gun+Infernal Artillery Chassis.

I will always fight tooth and claw to keep people's model collections as safe as possible.

There is a short article looking at the upcoming Infernal Dwarf army book in issue 18 of the 9th Scroll. 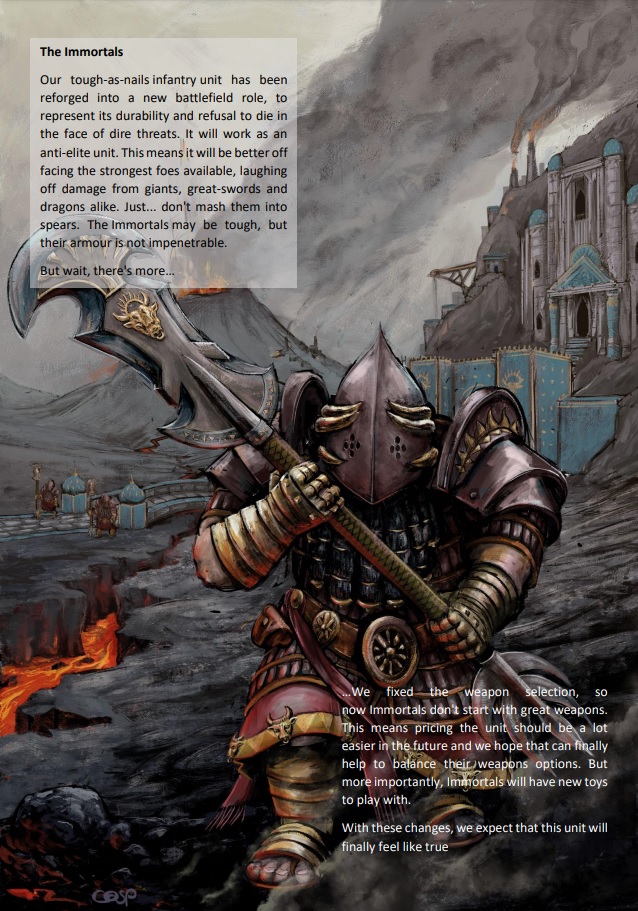 The warrior and his equipment look really great!

Crazydwarf over on the Ninth Age forums have written an Infernal Dwarf song to fit this jolly season. Apparently his wife has recorded a singing of it as well. I was tipped off by others on T9A about it:

Marching through the land,

Slaves have naught to say

With my Whip in hand,

I’m laughing all the way

Screaming out their lungs,

The joy cutting off their tounges

I sing this little song

The giant have not been fed

Cracked the whip, broke a hip

The slave is now gourmet, ha!

Oh, what fun, to flay someone

A Sacrifice for this song!

Soon we will be home

Scorched by the heat

Dragged the slaves away

Tauruhk love to give a beat

Whipping them all day

The Titan will come soon

Which slaves will meet their doom, ha!

The great bull seems quite mad

A perfect ending to this song!

Thanks for sharing. I’ll definitely be adding it to my collection

Ninth Scroll issue 19, pages 4-6, contain some conversion workshop look at new unit options in the upcoming Infernal Dwarf army book. Also included one background Q&A since it touched on Infernal Dwarves in relation to Hold Dwarves as regard magic: