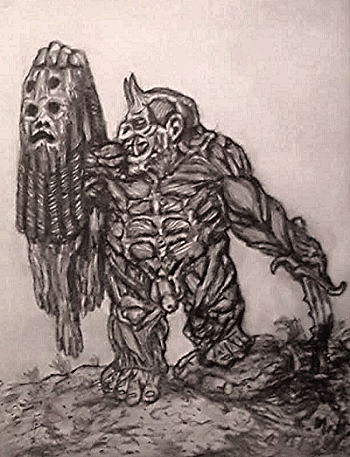 Once upon a time, there was a reckless Daemonsmith, rash and risk-taking like a Goblin. He threw himself into experiments, and shackled Daemons and forged with fell spirits as though peril did not exist since creation. He lacked sense, but not luck, and so he gained success through fortune and ingenuity, yet such could not last. Eventually, his senselessness caught up with him.

One day, the Daemonsmith garbled out the binding incantations and trapped with obsidian in a hurry without meticulousness, and so it was, that his careless work cursed him, for the whispering shadow of an otherwise imprisoned Daemon escaped, and hid where it found a safe hole, namely in the Daemonsmith’s senseless mind. There it lurked, and slowly embedded itself into his thoughts, until the Daemonsmith thought it part of his self, his soul.

And thus it was, that he believed it was his own spirit speaking, when fear gripped him like a rain of needles, and angst wracked him from within. And in the midst of inner agony a whisper reached him, slithering, sweet, poisonous, repeating the same message over and over in a thousand contradictory ways.

�?�They will have your hide,�?� it whispered, over and over again.

At first the Daemonsmith hid his woes, yet for all appearances he could not ignore the voice in his own head. He began to fear for his life, and dreamt terrible nightmares which drove him to insanity. He feared for his own skin, and suddenly the terror was too great in his soul. He wandered into the wilderness, wailing and rolling in the dust. And then, a spark of ingenuity arose within the blackest terror, and he knew then and there how he could save his skin from being taken.

The Daemonsmith drew his knife, and put it to his own flesh, and he flayed himself on the spot. He lifted his own hide with a mad grin, and resolved to lock the skin within a strong safebox guarded by cunning mechanisms and fell runes of cursing and sorcerous snares. They would never have his hide now!

Yet as the self-flayed man marched back to the city, his kinsfolk stared in rawest schock. He had no beard! He had flayed off his own beard! And the affront that the sight of a beardless man presented so enraged the populace that they descended upon the beardless Daemonsmith in a rabid mob, and did him to death with brutal violence, leaving but gory smears, ripped tendons and scattered fingers in the gutter. For such is the fate of those who would annihilate their own pride and prized honour.

- The Beardless Daemonsmith, by Despot Zhargonidus Doombeard, the renowned Chaos Dwarf author of fable stories, of our present time

Wow! An excellente and imaginative fable to add to the list and a gruesome illustration to match! 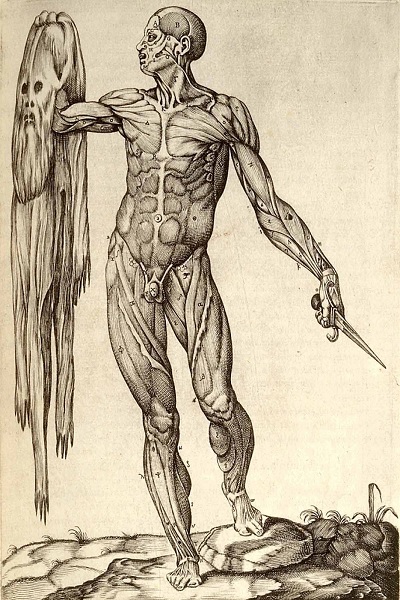 Nice, you should compile are you stuff to a annual pdf!

Tack! Certainly something to ponder doing. Cheers for the idea!

Just found this. Brilliant fable. You could compile a group of them illustrating the cardinal sins of dawi zharr eg carelessness, paying attention to lessers etc

Dark. But thoroughly Chaos Dwarf. Well done on the artwork as well. The detail and style after Da Vinci is really well executed and fits the story perfectly. :hat off

Uther, that is a good idea! We could start a thread on what the cardinal sins of Chaos Dwarfs would be to hear people’s ideas here, naturally with several contradictory or at least different versions getting hammered out as is proper.

The voices in my head are still arguing over this one.

Just “readed” it again due to your likening me to him.

Only problem is I don’t know where all the bits of my skin I’ve accidentally flayed off are.