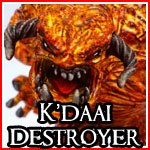 Welcome to the thirteenth chapter in the Daemonsmith’s Handbook! Please post your tips and tactics for the K’daai Destroyer here.

Some suggested topics for discussion:

- Armies and specific units or weapons to watch out for

Honestly, I find it the most hit and miss unit in the army.

If you can get it into the right place at the right time, it will win the game. It is horribly easy to counter though. Its reputation stems from its undoubted potency against poor to average players - for people who can’t deal with it, it is the most broken thing in the game. But the better the player, the easier it becomes to blunt its impact. Frenzy and items that bestow 2+ ward vs Flaming are its bane, meaning it can actually end up being a liability as chaff units redirect it into a compulsory overrun move.

Remember: it’s best stat is that Movement of 9. If it looks like it might get held up/countered, use that to your advantage and redeploy. Run 18" across the battleline if you have to, keep your opponent guessing.

If your opponent is clearly unprepared, a straight rush down the centre will often yield good results; I’ve had quite a few turn 2 kills on enemy generals by early rushes. Alternatively, if they have mounted Heroes in their centres, try sneaking around a flank: no one can ignore that.

Whatever the Destroyer does, it will be the focus of your enemy’s attention. The best way to capitalise on that is up to you.

Braggoronor really covered most all the bases.

In my few games, I’ve found that if I feign aggressive with the K’daai, the whole opposing battle plan shifts. So you can get him in a position, then with his m9 (and monstrous moves) get him back into a position, luring the whole enemy out of formation.

Some things to watch out for are anyone non-stompable with the dragon helm/gem.

Don’t forget your terror check when you charge units. You can pick on units outside the General/BSB bubble, or go straight for the nasty ones like Warriors of Chaos with Halberds.

The only thing i can think to add is the tactic of ‘moon walking’. That is placing your destroyer so that it is facing away from enemy units so as to get into the position you find most advantages. You will have to watch out for flank and rear charges, but it is a sneaky way of getting around frenzy checks.

I also find they work best while hitting an enemy flank, i love paring one up with a stubborn Sorcerer-Prophet on a Tauraus, Bull Centaur Renders, Iron Deamons. The first will hold a unit in place while the Destroyer comes around a flank and mauls it.

Really interesting tactic propervillanz, it’s the first time I heard of such a thing. It must be a little bit difficult to master but easier if paired with some bull centaurs.

This might seem common sense, but rember when you put your destroyer into a fight, you want most units into his flank. Massive flank means lots of models hit with blazing body, and this will just about ensure he never loose combat. While its hard to hurt him in hand to hand, he still can crumble.